It's possible that the Bonus Unit stepper isn't working properly. With the game unplugged you can test it by pushing in either solenoid plunger all the way. Then release the plunger and let the springs move the wiper disk. It should step cleanly from one position to the next in both directions across its entire range without any hesitation or sluggishness. At any position all four wiper fingers should land directly over a contact on the wiper board, not off center or between two contacts. The wiper fingers should also have enough tension to remain firmly in contact with the contact board.

After that check the switches on the Bonus Unit. In particular there is a zero position switch on the unit (red-black wire to black wire) that should open when the Unit is in the zero position as shown in the manual. The switch will be on the opposite side from the wiper fingers.

It sounds like your Bonus relay isn't relaxing reliably when the Bonus Unit reaches zero so understanding what it does will be helpful.

I’d like to ask you what tool you use to change the colour on the schematic sections?

HowardR is correct, I usually use Gimp to prepare schematics. But the program you use isn't as important as the brush features it offers. To turn parts of the schematic red I use a paint brush mode called "Lighten only" which affects only colors that are darker than the color you're painting with. So black turns to red, or whatever color you're using, and white is left unchanged.

My reading of the schematic here is different from yours. The switch which cuts the power to the eject relay is NC, so when the bonus relay activates this switch opens and it at this point the eject relay should relax (unless held in through the motor switch).

You're right of course, the Eject relay relaxes when the Motor 4C switch opens after the Bonus relay (or any of the other award relays) fires.

I would focus my attention on the first thing to go wrong which I think is the Bonus relay reactivating once it has relaxed. The later issues may be a consequence of the Bonus relay misbehavior. The Score Motor in particular is probably running because the Bonus relay has reactivated.

I think the order of events once the Bonus relay has fired is: 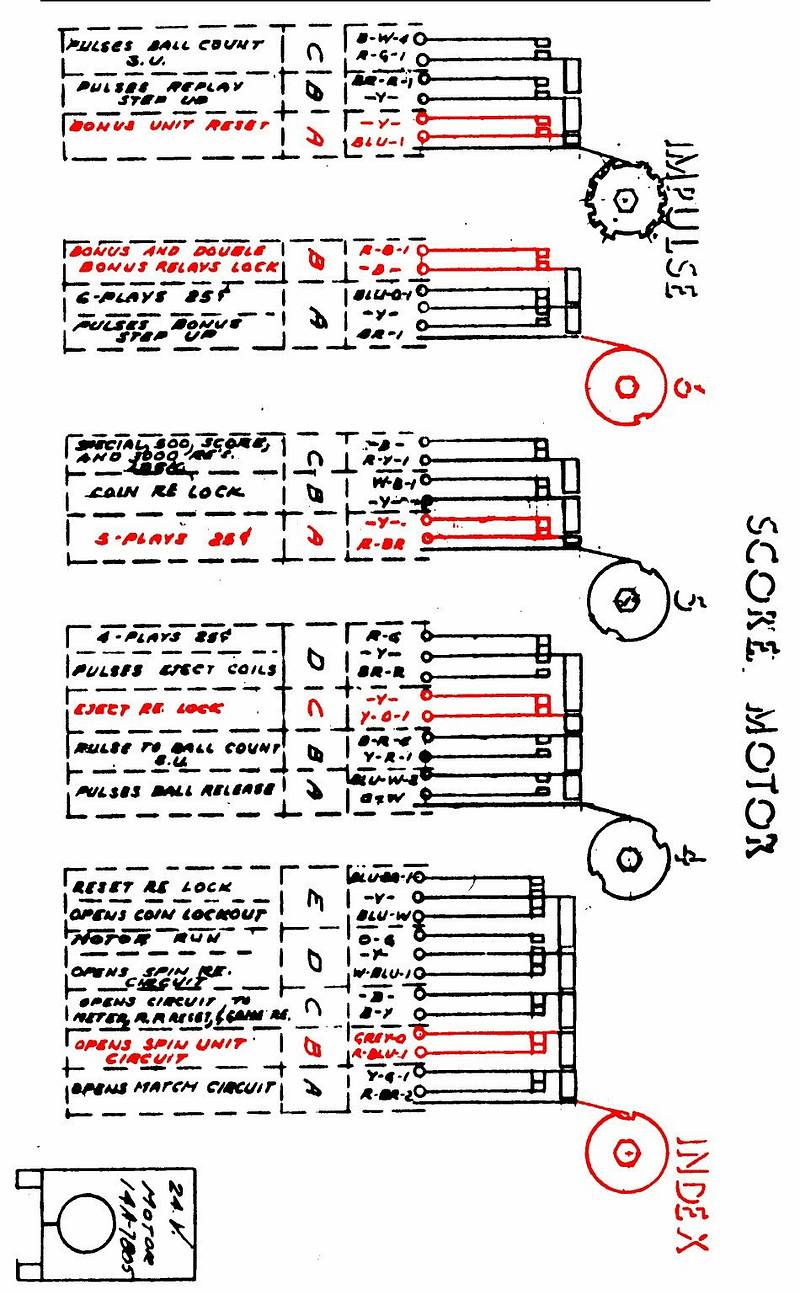 One unusual aspect of this game is that the Motor appears to always rotate a full 360 degrees rather than the 180 degree half turn which is more common. Note that the Index motor cam only has one notch, not two like the other cams. Also note that the 6B switch that should release the Bonus relay only fires once in the revolution, presumably near the end of the 360 degree turn as the last of the possible ten 1000 bonus points are being counted.

Another option is to disconnect the Score Motor service jack and to rotate it slowly by hand to see what the sequence of events is in slow motion.

Ok. Maybe the Bonus relay is the victim and not the culprit. Why is the Eject relay not releasing, or why is it reactivating?

Are the Spin and Eject relays releasing as described in reply #7?

I think even once the Bonus Count Zero switch opens, the Motor 6B switch should keep the Bonus relay active until after the Eject relay should relax at 4C as pointed out by

pinballdaveh earlier. I think if 6B weren't closing the Bonus relay would release too soon and you'd see at least some of the issues you're seeing.

I agree that the issue is likely in the path that you highlighted. I'd like to understand why the Eject relay won't let go at Motor 4C though if the Bonus relay holds on until 6B. If you set the Spin Unit to select the bonus, then block power to the Spin Motor I wonder if you could try turning the Score Motor manually again to see if you can unwind the sequence of events.

You may need to manually activate the Delay relays since they rely on the Spin Unit turning to fire. I haven't figured out what their role is yet but they're there for a reason.

I'm glad you got it sorted out. Switches that close but don't complete the circuit fool lots of folks.

What stops the bonus at 30? Is there a mechanical limit like a missing tooth on the gear? If there is the problem might be that the missing tooth should come into play at the 10th step and not the 30th step. Can the gear be mounted in any other position?

I'm pretty sure that shouldn't happen. Do the bonus lights go out after the 10,000 point light too?

What happening is that the stepper is advancing 20 steps too far and completing circuits it shouldn't. 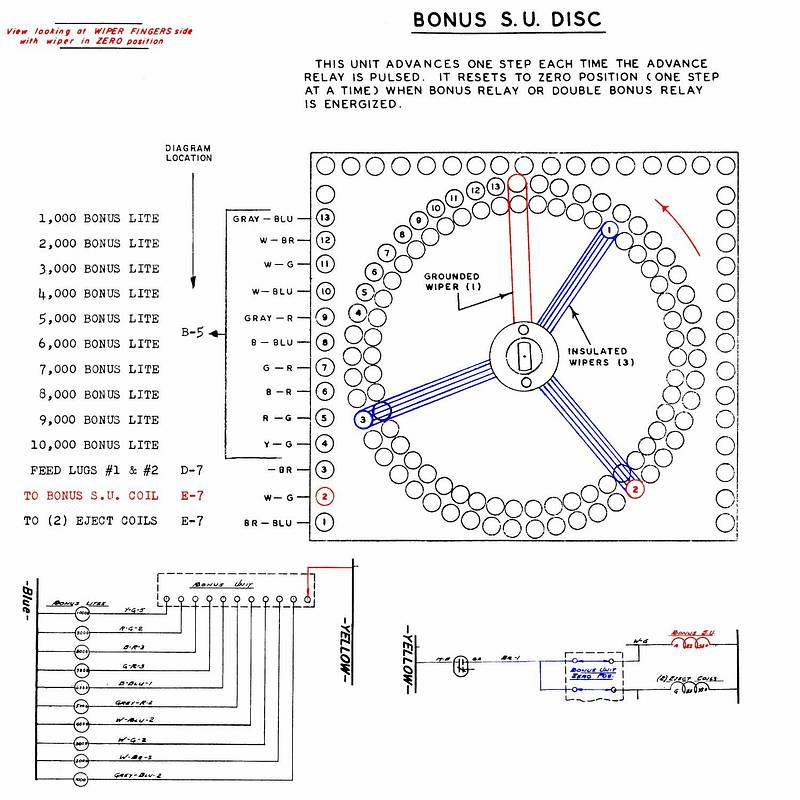 Jive Time Bonus Unit (resized).jpg
Normally the red wiper steps counter clockwise as the bonus advances to contacts 13-4 which light the ten Bonus lights as shown on the lower left schematic. The red wiper is connected to the yellow/common wire on the schematic and is labeled "Grounded Wiper" on the diagram.

What's happening in your case is that the red lighting circuit wiper is taking 30 steps until it reaches contact 2 where it fires the Bonus Unit Step Up solenoid.

Without a limit switch to keep this from happening there should be a mechanical limit of some kind that's not on the schematic.

Sorry, I can't help you with the green paint.

No need for paypal. Just give someone else a hand when you have an opportunity.