The Multimorphic team is proud to present Cosmic Cart Racing on the P3. CCR is a game the merges a fast-paced, flowing upper playfield layout and unique physical features with popular cart racing concepts, like race-based gaming (rather than 3-ball play) and powerups. The CCR upper playfield includes nearly 800 individually controllable RGB LED elements to deliver incredible lightshows and more information and feedback than ever before, and cool physical features like four magnetic ball lock / accelerators create unique ball action and game flow.

The video below gives a short glimpse of the game, and people are enjoying the game this weekend at the Texas Pinball Festival.

Excellent! Can't wait to see some more gameplay footage and find out how to play. Will be watching the seminar at 2pm tomorrow:

A few notes from the seminar for those who missed it:
- Layout is designed for flow with loops, ramps, etc.
- CCR is race-based, not ball-based. You don't have a limited number of balls but if you drain you slow down.
- There are magnets on the ramp which can stop balls, reverse the direction, lock balls, ramp assist (propel the ball like the supercharger in Getaway), etc.
- Targets on the side of the playfield award power-ups.
- Can play individually (against the computer), multiplayer (race heats against up to 4 players), networked multiplayer (race against real players on other P3 machines at the same time over the internet)
- Layout is done, code is about 50% done, ships in a few months. 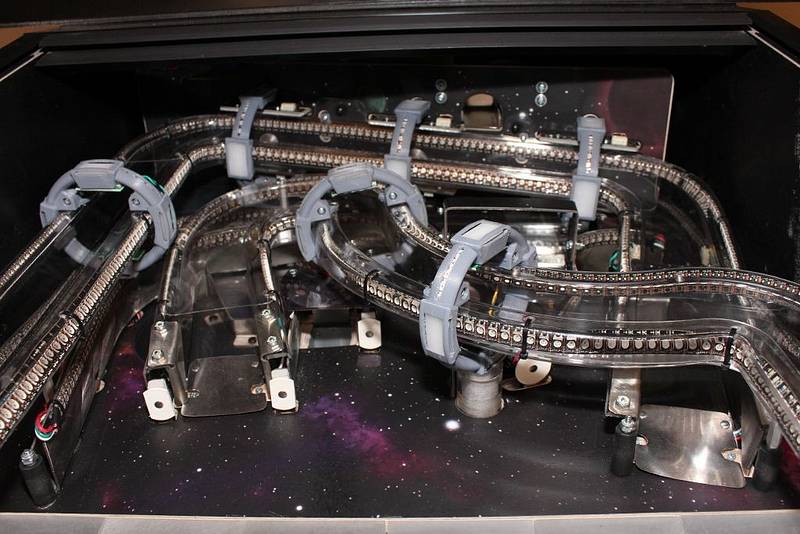 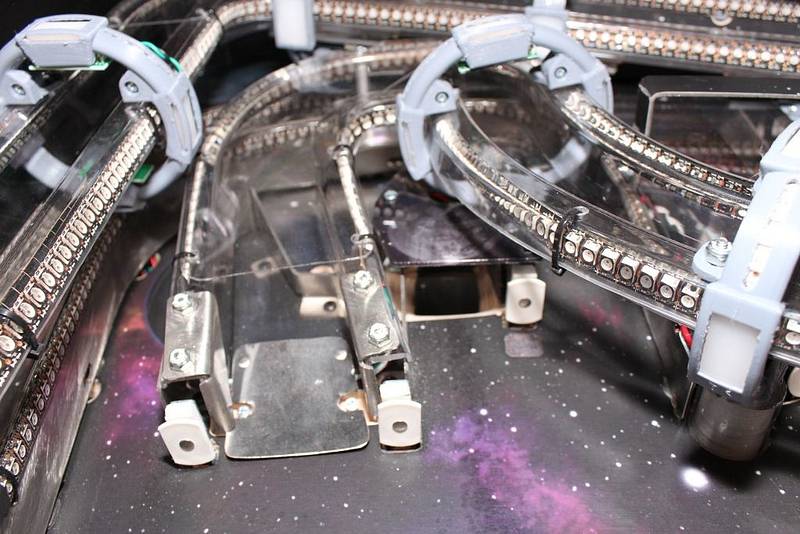 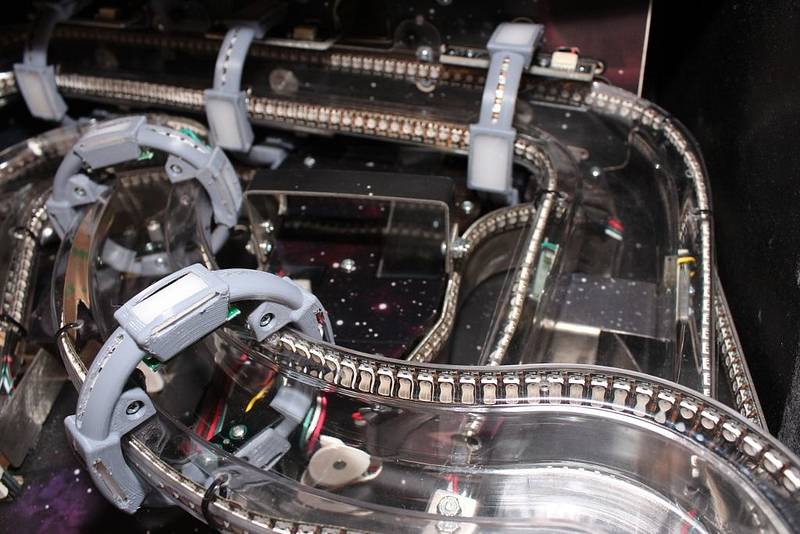 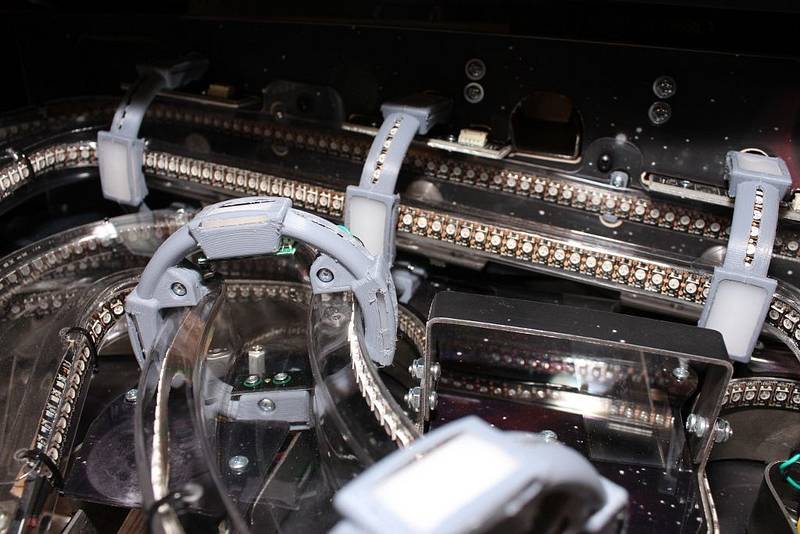 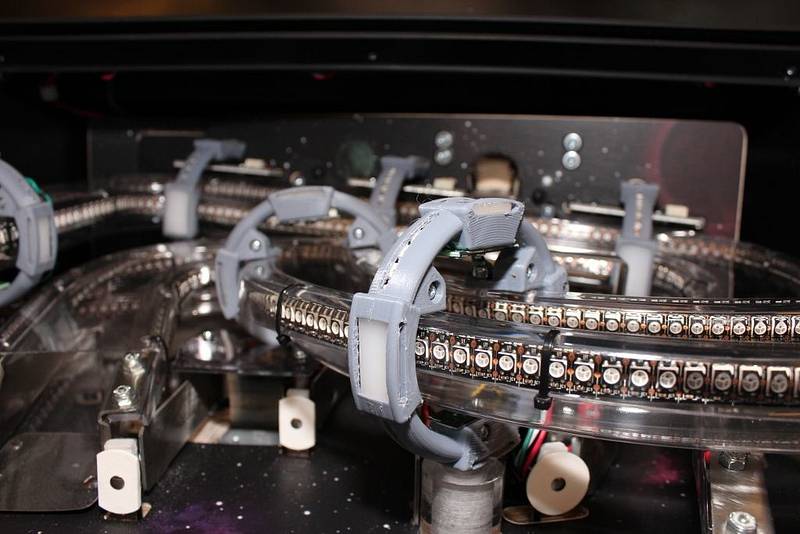 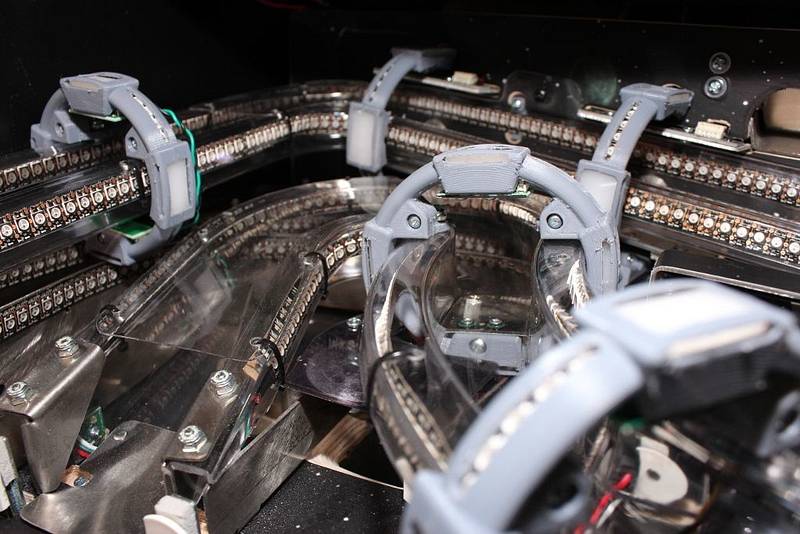 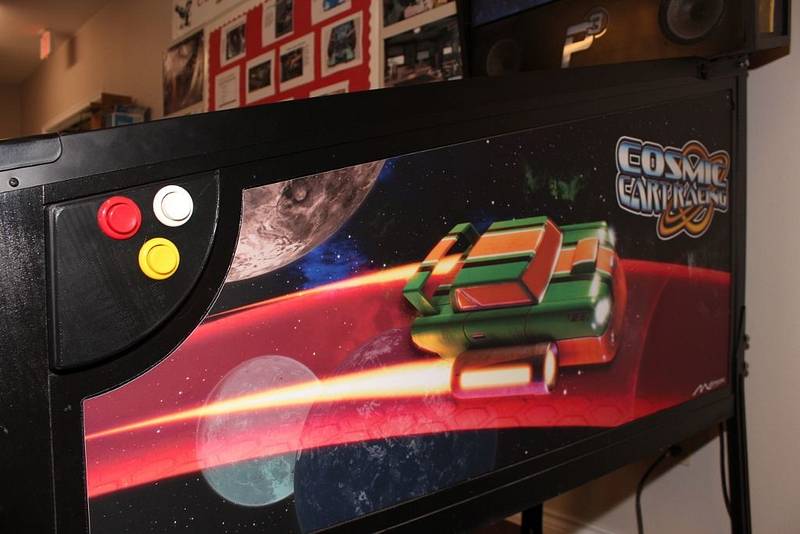 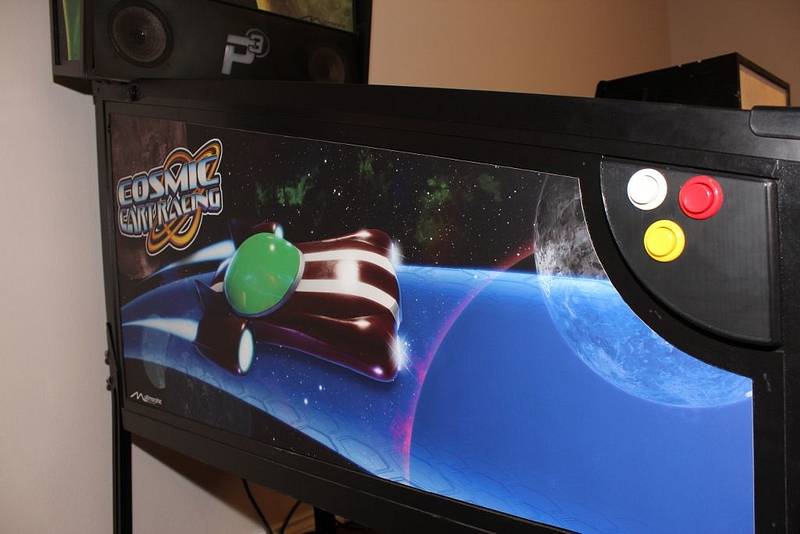 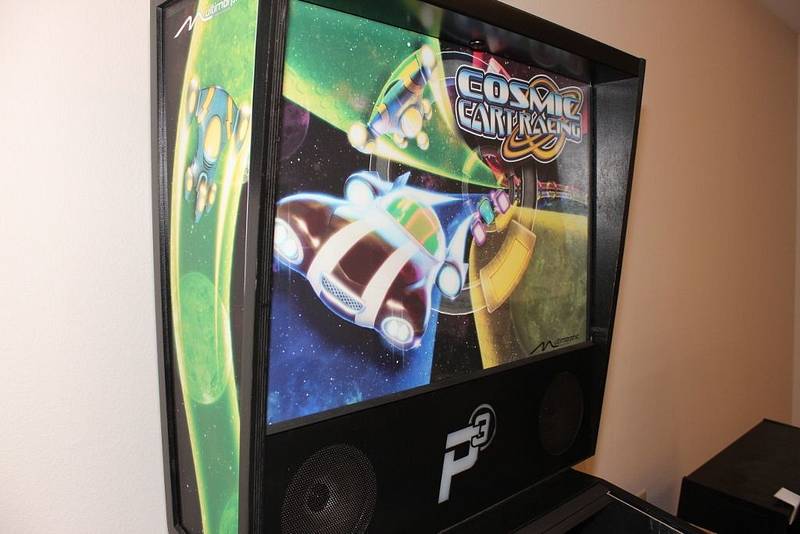 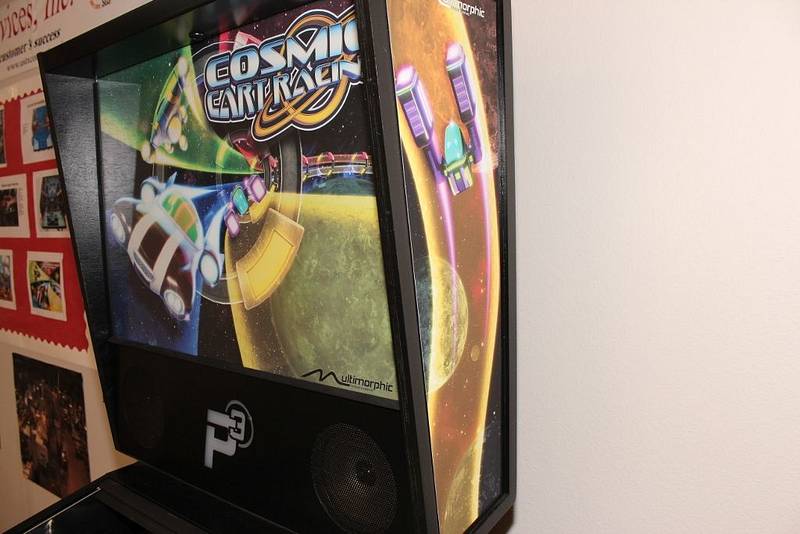 Some early gameplay vids are below. Reminder, software is about 50% complete. Voice callouts, music, and sound effects are about 5% complete and should be considered nothing more than placeholders.

Thanks for the videos! The game looks fun with lots of flow shots.

I know you have some/all of this planned but:
I guess you are going to be able to choose your cart at some point, are the carts going to have different abilities or advantages/disadvantages?
It would be cool if you could also choose different alien characters as your driver, maybe with special powers (Lexy could make a Pinbot-style cameo as one of the drivers).
It would also be cool if you could hit the other drivers off the track by shooting at them as you pass on the LCD screen.
Perhaps the cars could drive by a space-station grandstand at some point filled with aliens (just thinking of ideas which might inject some more humour/personality).
How about some Rocs/asteroids/comets which you need to destroy with the ball at certain points in the race?
Perhaps some tiny ships or planets on the upper playfield and maybe a few printed playfield plastics here and there if there is room?

Are there different tracks to choose from?

Man I simply don't understand why the lack of excitement over this. I mean this post is 4 months old and only 13 posts? POTC was microseconds old and it already had 200 plus posts. Sigh. Im thinking about getting one just to have people over to demo. Im pretty excited about this. Thanks guys keep up the great work!!

Twitch stream can be found here:

How about a mode where you go into a pitstop and have to hit targets to change the wheels, refuel etc.? You could maybe also get winnings from the races which you could then use to add upgrades your vehicle.

I’m eager to get Cosmic Car Racing for my P3. Really well done.

We're back from the Houston show, where we had a great time showing off the latest CCR (and LL-EE) developments! As everybody knows by now, we [intentionally] do things differently than the other manufacturers, and that tends to result in fewer discussions from the mainstream forum posters who like discussing traditional pinball, but the progress we've made on CCR was really well received. The game was a hit. All of the changes we implemented since TPF paid off, and we still have some more gameplay ideas that are in the development pipeline.

I spent a good bit of time at the booth watching people play and explaining to them the differences to traditional pinball games. As always with our outside-the-box game designs, it takes a bit of time to grasp the differences, but those who did had a blast! I saw dozens of people walk up with their friends, figure out that they could play against each other via the Wi-Fi linking, and play a few times in a row as they learned how to strategically use powerups and combo their shots together to gain speed.

The only mechanical issue I saw was the scoop on the left machine sometimes kicking out STDM. We've tweaked the scoop design for production playfields; so that should be resolved. The only other change I made during the show on CCR was lowering the setting for allowable number of players per game on a standalone game to 1. That kept people from accidentally(?) starting 4 player games.

I've attached a few photos from the show. Apologies for the darkness, my phone's camera couldn't get the light exposure right. It would either focus on the players or cabinet and blow out the displays (LCD backbox displays!), or it would focus on the displays and make the cabinet too dark. 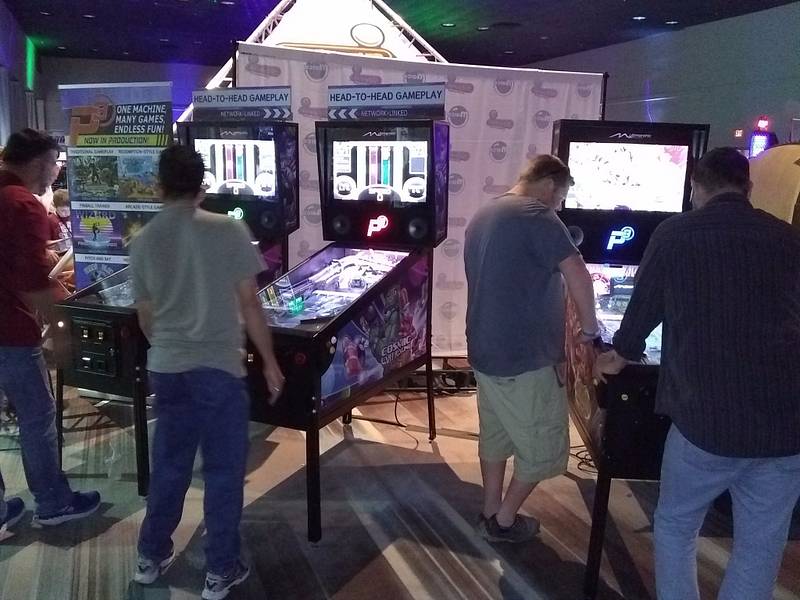 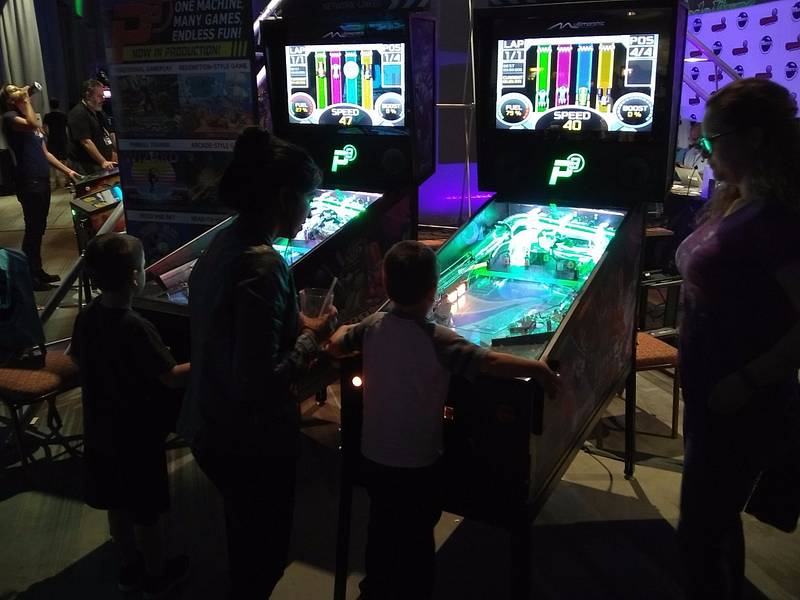 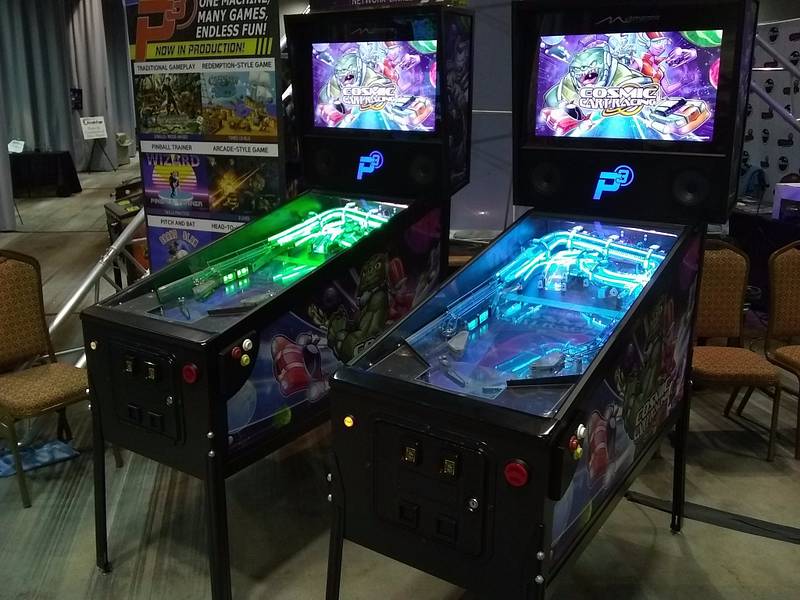 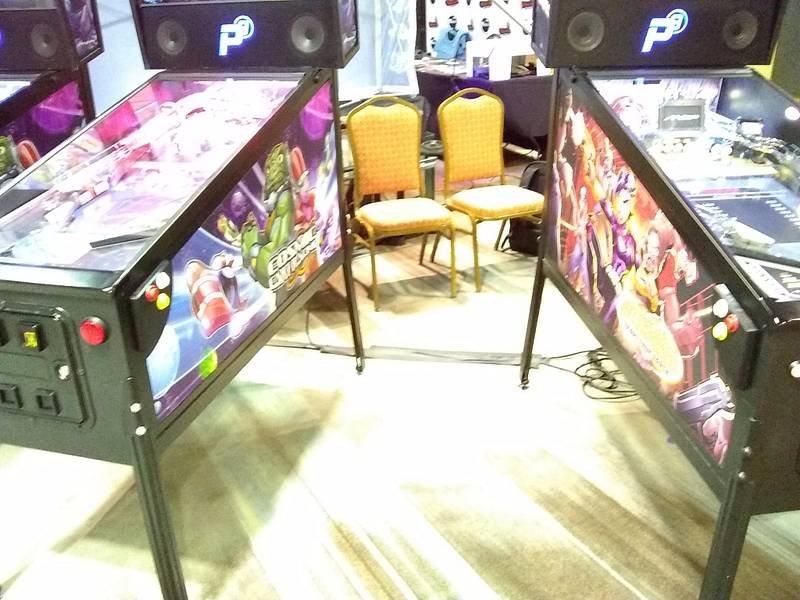 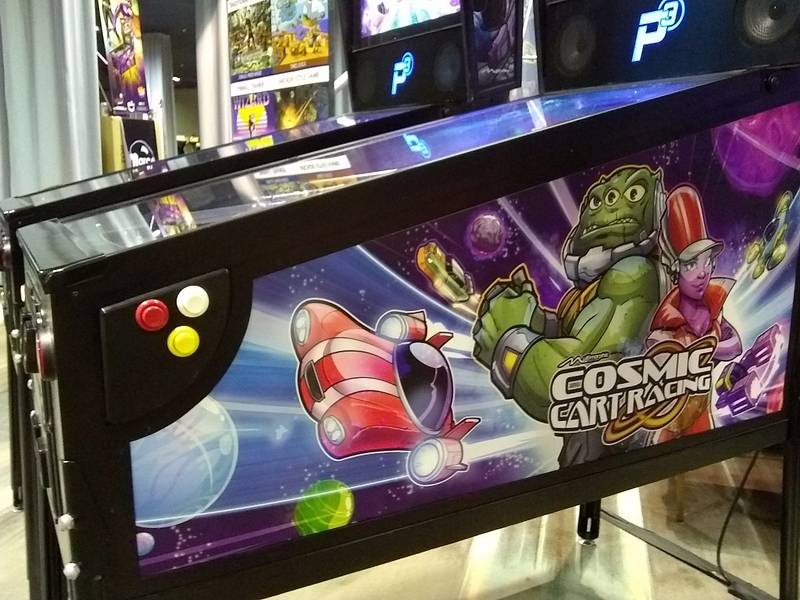 CCR was a blast! I love the new graphics on the track that let you know when power ups are available and speed ups are increased. It’s so much fun to glance over at the other machine right as you throw an EMP or roadblock at them.

And those backbox LCD’s are legit! They look great in person!

Still doesn’t do them justice! But the best photo I got. 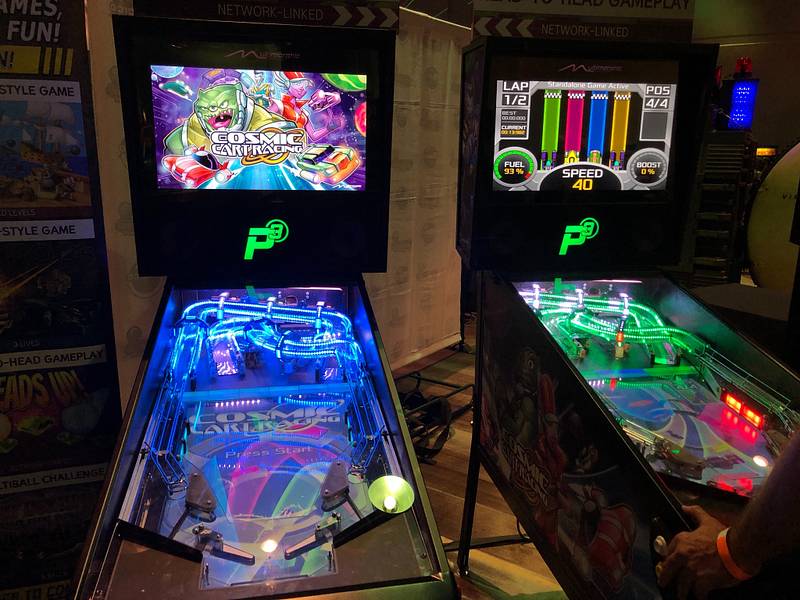 CCR was a blast! I love the new graphics on the track that let you know when power ups are available and speed ups are increased. It’s so much fun to glance over at the other machine right as you throw an EMP or roadblock at them.

This game is awesome!!

I wish I had been smart enough to grab video. Alas, I am not a clever man, and am easily distracted by blindly lights and the kickass party that is the Houston show.

It's official. Cosmic Cart Racing for the P3 is shipping!

We'll be working through the backlog in the next 2 months or so. So if you have a CCR reserved, you'll be hearing from us very soon!

For everybody else, we'll be opening up orders on the website soon. 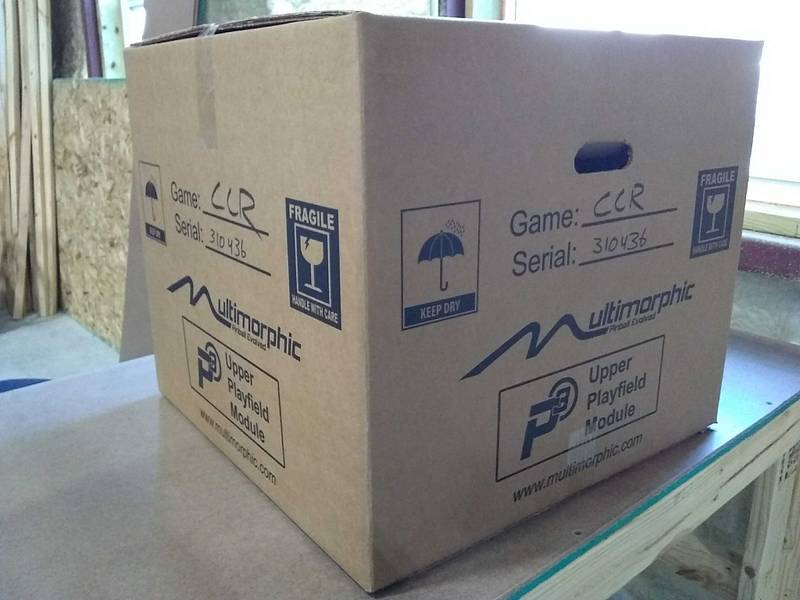 Can't wait to read the reviews!

looking forward to seeing this cool game in action

looking forward to seeing this cool game in action

Hoping someone will bring one to pinfest this year! If not, I'd like to offer multimorphic my assistance in getting one there. I'll get a space!

Hint hint... Nudge nudge. I'll even truck it up there.

Anyone got CCR yet?

Anyone got CCR yet?

Not me. Had to pick between the Monitor kit and CCR; I decided on the former.
I just need like 3-4days (in a row) of rally on the Stock market for my limit order to trigger.
I'm not holding my breath.

My CCR has just been packed and on it's way to Oz. Backbox and CCR artwork on it's way also. Can't wait

My CCR has just been packed and on it's way to Oz. Backbox and CCR artwork on it's way also. Can't wait

Mine shipped today as well... looking forward to the 2 minute install

Many of you asked for it, and we listened. CCR 2.0 is coming soon with "Career Mode", a new/additional gameplay option with traditional 3-ball rules. 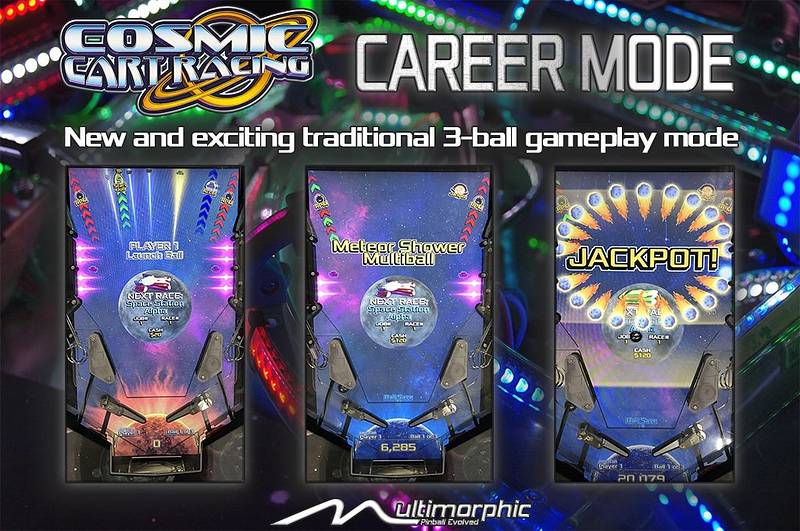 Career mode is one of my favorite things about CCR.

Career mode is one of my favorite things about CCR.

YeOldPinPlayer for violating his NDA.

(that's a joke, people)
Seriously; I played it once a few months ago... a welcome edition to the Multimorphic library.

Ahem... someone needs to add CCR to the Pinside database. :knudge:knudge: