I bought my first bingo pinball this weekend

I played some bingo machines for the first time at the white rose gameroom show this year. After some explanation of the features and gameplay from Nick and Jeff, I spent a lot of time playing them there on friday. I started searching for one for sale immediately and brought one home a week later. I also got the opportunity to see and play the sellers awesome Gottlieb wedgehead collection, which was worth the trip itself. 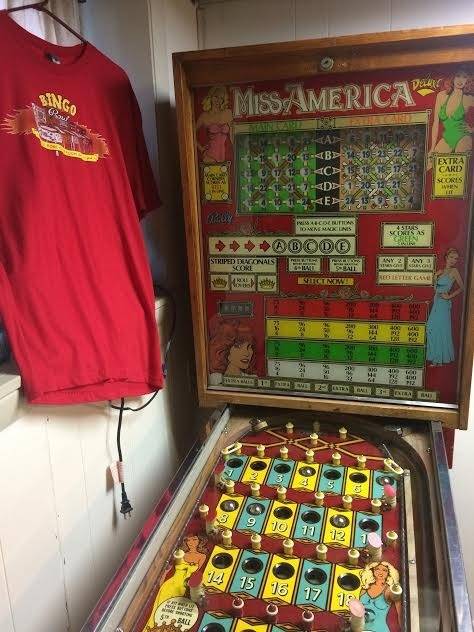 Well, until he does, I'll be scratching my head!

Was this the Miss America Deluxe that was on Mr Pinball classified and the seller was John?
Beautiful bingo for sure...enjoy that great player.

Yes it is, he mentioned that you helped him out with the ad.

Glad to hear that's the game.

I had 9 Miss Bowling Turbos which is the late 1980's WIMI electronic two card bingo machine and I loved that game. So cool when a player gets a chance to move numbers back and forth and in and out of each card. Like said, any of the Miss America bingos are great players.

I guess by now you understand all the features and payouts? 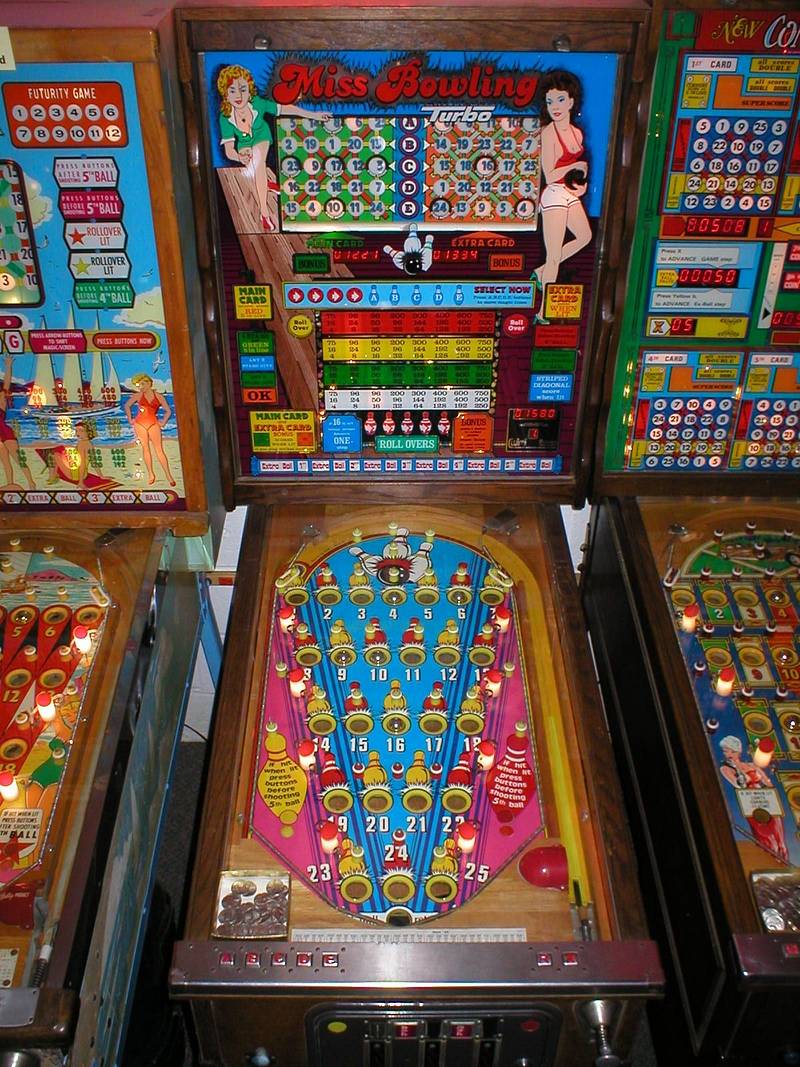 I believe I understand the features and payouts. There may have been a few times that the payouts were inaccurate, or I was mistaken about what I thought I scored. If you score on multiple lines is it necessary to press the R more than once? I had 2 lines of 3 on a game and pressing the R once didn't give me the full payout, so I pressed it again and it gave more credits. This was one of the times it didn't appear to be the right amount in total. The last game I played earlier today scored 3 in the white and it paid the correct amount, I believe it was 16.

I have a few minutes so here you go ...
I'm an old school bingo guy.
Many years ago I was trying to get new blood into this dying facet of the pinball hobby and having no success.
I met Nick who was into video pinball and had him come play real games and introduced him to bingos. He didn't get it ...'they're too cerebral for me" ...
I kept having him over - he'd play my flipper pins then I'd take him out back and put him back on my bingos... after several sessions, one night he hit a couple of big wins on my Golden Gate and I watched the light turn on ... "I GET IT"! -
Youthful enthusiasm kicked in.
I told him of my quest for new blood and that since us old guys won't be around that much longer I wanted HIM to be the one that brought the fascinating world of Bingo Pinball to the next generation.
I encouraged him with ideas of things I didn't have time (or know-how) that might help.
I casually mentioned podcasts might be a good way at one point - he started one.
I could tell he was eager to make a name for himself in the bingo world and he has.
Whether he remembers it or not I mentioned the Bingo Row idea at York - called Rich with the idea - told Nick and he took over (fine with me cuz I'm busy).
He's making a bingo emulator - guess who planed that idea... = )
I've had a very strong influence on Nick and can fondly call Nick my Bingo Pinball offspring ... so through his new found mission of bringing bingos to a next generation of players with all of his hard work ... he has now influenced you ... Hence you are now my "Bingo Grandson" (hoping for may more too ... = )

Sometimes.....If you score on multiple lines you have to press the R button more than once to get paid out for the amount of replays you are to be awarded.

You can always slide the playfield glass off and place the balls in 3 in a line, 4 in or a line or 5 in a line or any other in lines wins you want to check if your payouts are paying correctly.

For an EM bingo it has a lot of features which is a big turn on for any bingo player.

Thanks Steve, I have been enjoying this recent introduction to bingos and look forward to continuing my education in this area of pinball.

You can always slide the playfield glass off and place the balls in 3 in a line, 4 in or a line or 5 in a line or any other in lines wins you want to check if your payouts are paying correctly.

Vic, I will try this tomorrow, thanks.

Is there a certain degree of angle you guys prefer with the bingos? Mine seems to be very fast compared to the few I played at York.

I set my front leg levelers turn all the way in(no height) and the back leg levelers turned up an inch high. After that adjustment I'll play the game and fine tune the height in the back some if necessary. The ball needs to float just down the playfield with a medium speed, not fast or not to slow.

Hey there! Steve has absolutely had an influence on me, and yes, you are one of the many 'grandkids' spawned from all of our collective efforts to bring bingos back to the collector and player community.

Glad to hear you picked up a Miss America Deluxe - that is a complex game, and will likely keep you coming back for a long time! The Red Letter game is something I did not explain to you at the show (but is spelled out on the score and instruction cards and the backglass).

Congratulations on joining the bingo world! Anything I can help with, let me know. If you need explanation on any features, I know Vic, Steve or myself and the other bingo folks will be happy to help. Welcome! P.S. - Nice shirt!!

Regarding the height - Vic's advice is correct - if you set the height too high, the balls will jump out of holes unnaturally and do other weird things, as well as skipping right by the top rows of holes. In the old manuals (early woodrail bingos), Bally would specify that you should level the cabinet, then raise the back levelers by 1/4 inch to a 1/2 inch. I've experimented with that setup on my more modern bingos (metal rails) and it still works pretty well. You'll have to experiment a bit to see what you like.

was into video pinball

To be fair, I've been into real pinball my whole life, but at the time Steve and I met, there was a single location in our town, and I hadn't caught the bug to own a game. I had video to supplement my addiction. I quickly realized, upon seeing Steve's flipper and flipperless collection, that I /needed/ to own a game of my own. And then a bingo of my own. And then a dozen games.... and etc.

podcasts might be a good way at one point

Well, I suggested it to him (we were discussing the existing pinball podcasts and their lack of bingo content), and initially, I wanted Steve to be a co-host - but my exuberance was too much for him. I had a lot to say, and wanted to do it on my schedule.

He's making a bingo emulator - guess who planed that idea... = )

IIRC, we opened up your Bikini on one of my first sessions working on a bingo - you showed me all the units and especially the control unit, and I turned to you and said, "This is incredible, but I bet I could make one of these with a single board nowadays." And, essentially, I have.

There's been a lot of input from you and other members of the bingo community. I also appreciate Steve's honest feedback early in the process when I first got the game physically together. Steve, I'll be working on screen games soon enough.

I do remember this - IIRC I even convinced YOU to bring one that first year.

I owe a huge debt to Steve and all of the bingo folks - it's a really great community.

These games are incredibly fascinating from an engineering and gameplay standpoint. Thanks again for sharing your new acquisition!

I started searching for one for sale immediately and brought one home a week later.

Congrats on your new acquisition! Very exciting!!! I like your Bingo Pinball "side-armor" (the Bingo Row shirt), too!

...and then every bingo that every existed...in one cabinet.