I must preface that I am not a wood guy at all. I made a custom playfield and I am baffled as to using 1'' round inserts. If I use a 1'' hole saw the hole is too big and the insert just falls through the hole. So, I got a 15/16" hole saw and that is too small? Am I missing something painfully obvious? I was smart enough to try it out on scrap wood prior to attempting install on my playfield. Any help would be great. I really just don't understand what I am doing wrong

I'm not in any way an expert on this, but can't you make a smaller hole then use a router bit to make a 1" hole with a lip?

In my experience, hole saws usually make a hole that is close enough to their stated size that it typically works. For greater precision, pick up a set of forstner bits. They are great for drilling flat bottom holes in wood at a known diameter.

For drilling insert holes, use the same sized forstner bit as the diameter of the insert, and drill down to the appropriate depth (typically just short of the height of the insert so it can be sanded flush later) and then use the dimple in the center created from the pointed tip to drill through the rest of the playfield with a forstner bit one size smaller. That will leave a small lip for the insert to sit on.

I'm guessing that 1" dimension is a nominal size, actual size is different.
If it were me, I would use calipers to determine the precise diameter, then cad it up and have it laser cut out of a piece of 1/4" masonite so I can use that and a pattern bit in my palm router to make the correct sized hole (to the correct depth too)

The inserts are 1”. The hole saw (1”) cuts fine, but insert is way too loose and will fall right out the bottom. I measure the holes as in pictures. One is just under 1” and the other is just over 1”. I guess I should try those other hole cutters as mentioned above or a speedbore? 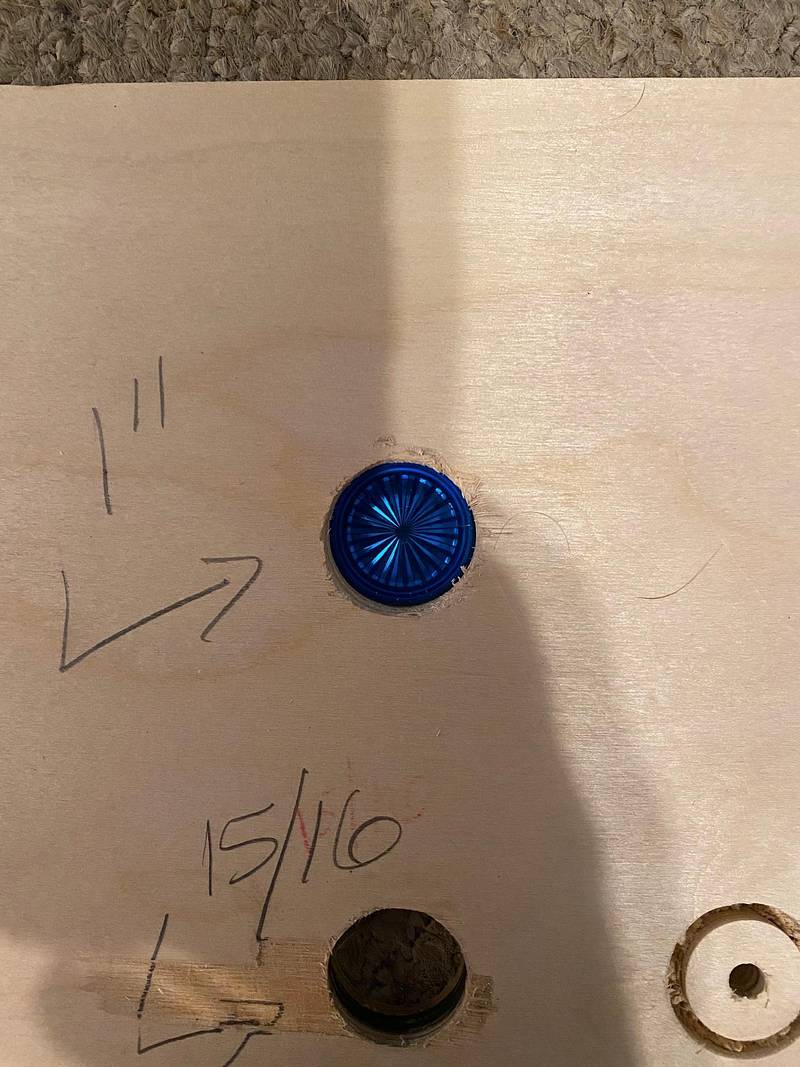 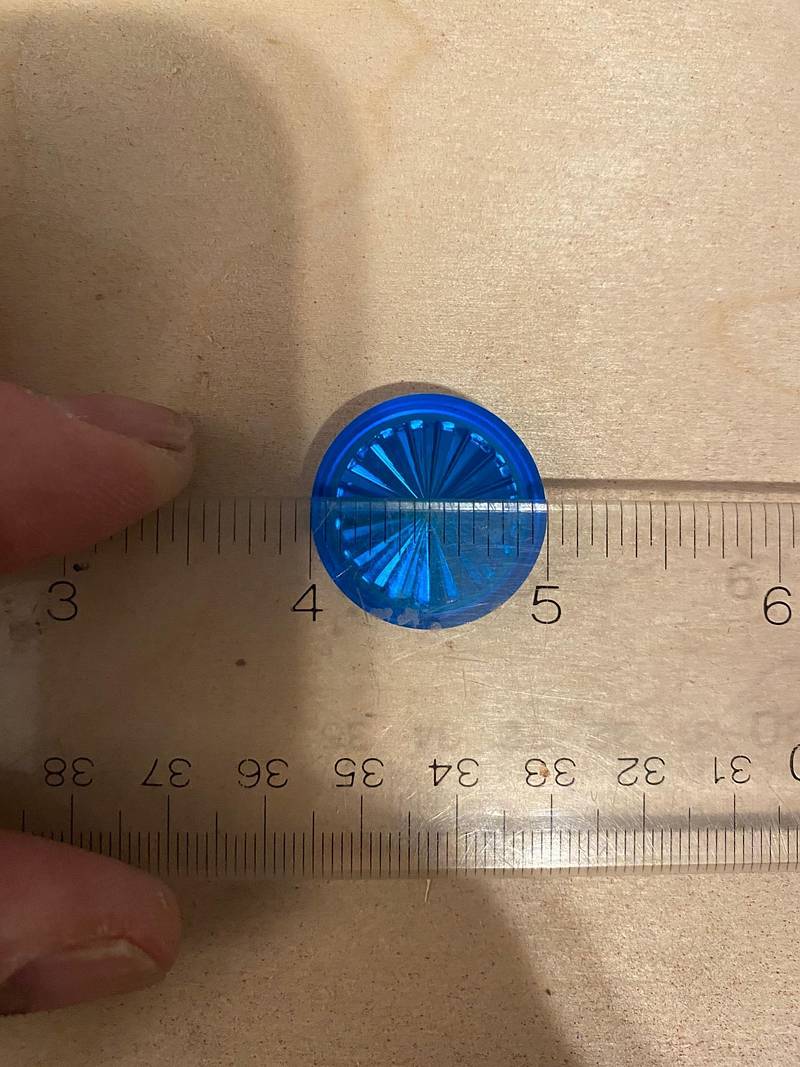 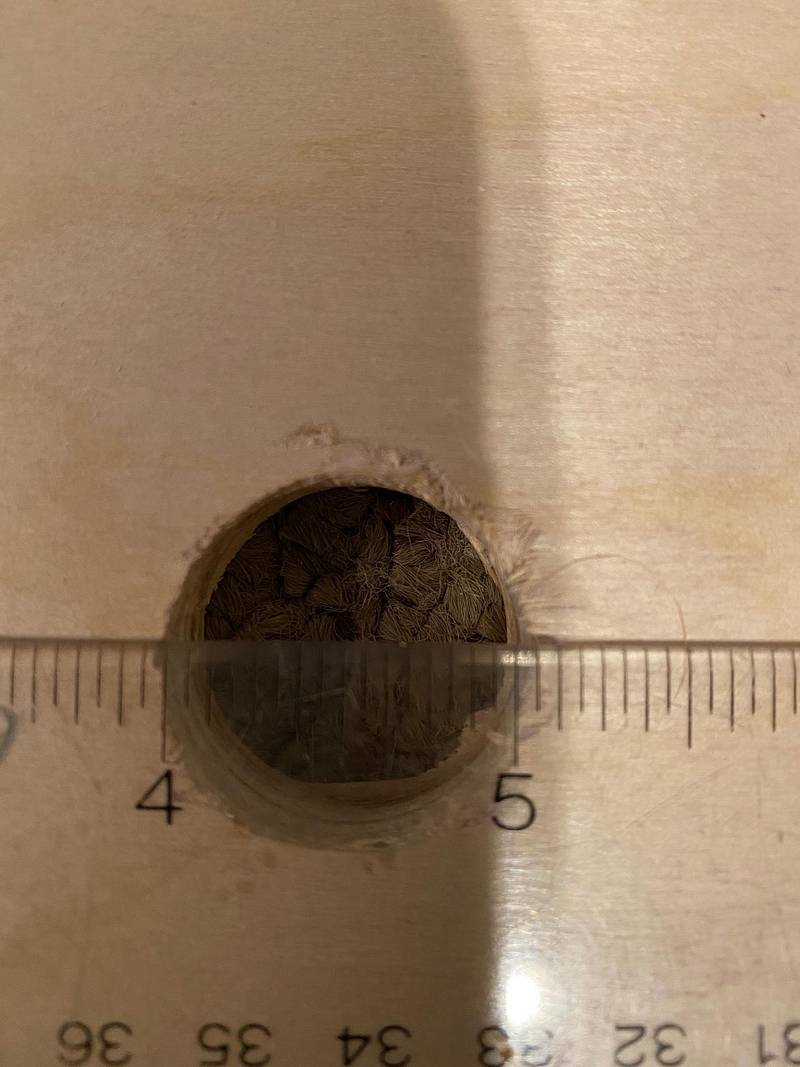 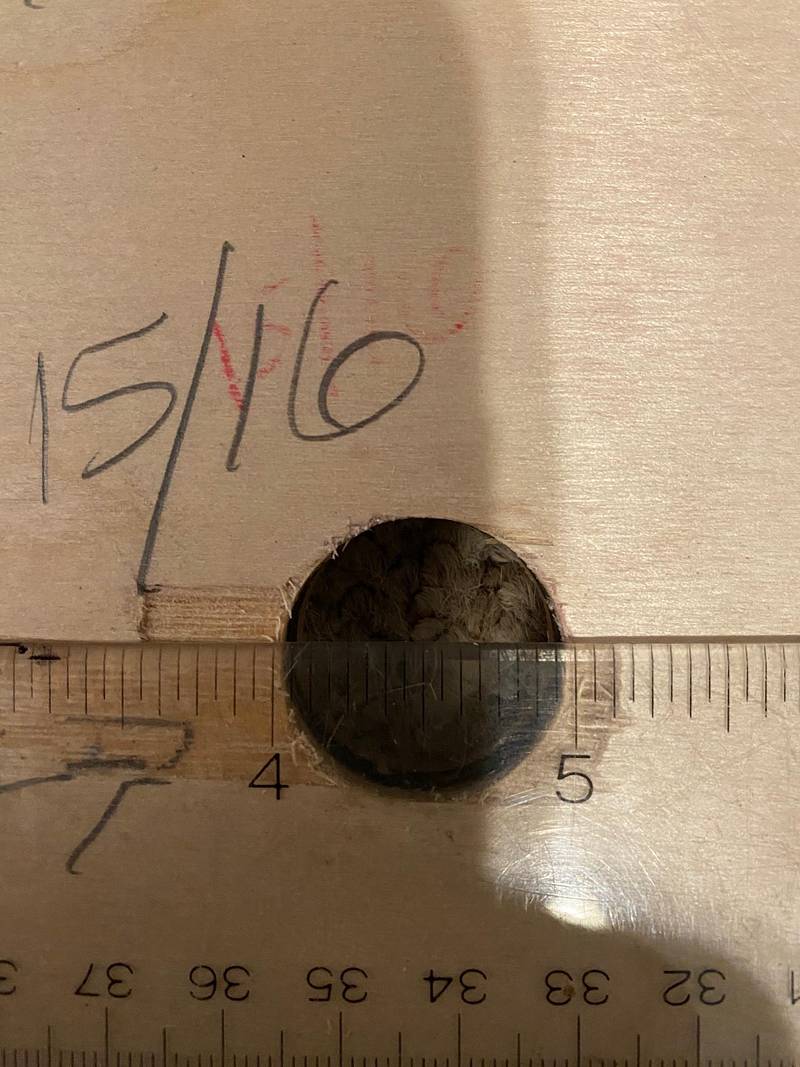 Check the image i attached, hole should not be the same width all the way through (suppose that would be possible with very exact measurements and glue or epoxy) 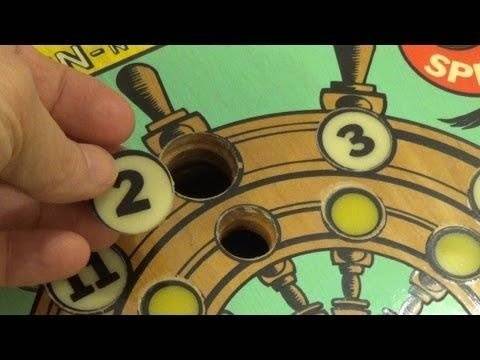 If you just can't find a good size forstner bit, you might need to just make a guide and route them out

Every job as a tool that makes it easy, a Forstner bit is your friend here. 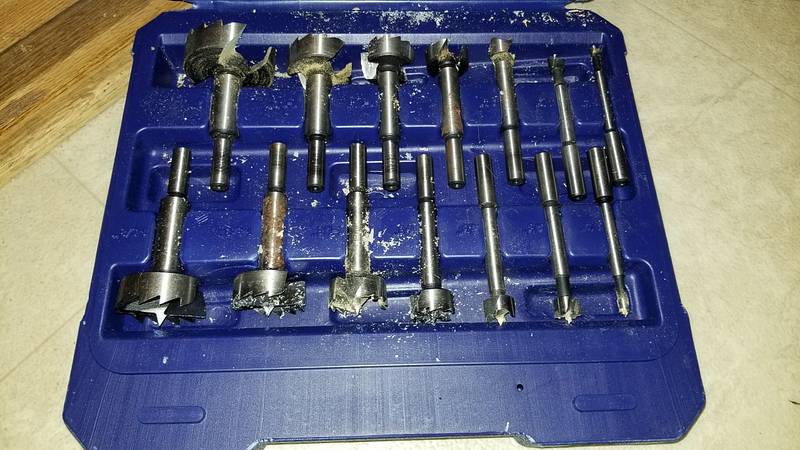 Drill a small pilot hole where you want the very center of your insert. Then use one inch Forstner bit and go the depth of the insert with it (about halfway through the wood ) then use the smaller bit to complete the hole leaving a shelf for the insert to sit on just like the pic Novastorm posted .

Hole saws are good for rough work. It’ll look like a beaver knawed out the inserts.

You need something with precision like a forstner bit or router as others mentioned.

Thank you guys. I will pick one up and go from there. Do they get glued in? Or do they get wedged into place?

Also check your drill for "run-out"; possible that the bit wobbles somewhat and that could cause the hole to be too large.

I think a plunge router would work well in this scenario since you can precisely control the depth of cut.

Also you should back up your work for the smaller radius cut through the playfield with a piece of scrap or it will blow out the back.

I really appreciate the tips. It would suck to screw up the playfield as I have done everything with a dremel and jigsaw to this point. This is the whitewood with no inserts. The difference between cutting that over baltic birch was stunning. I now understand why thats the wood of choice for pinball. 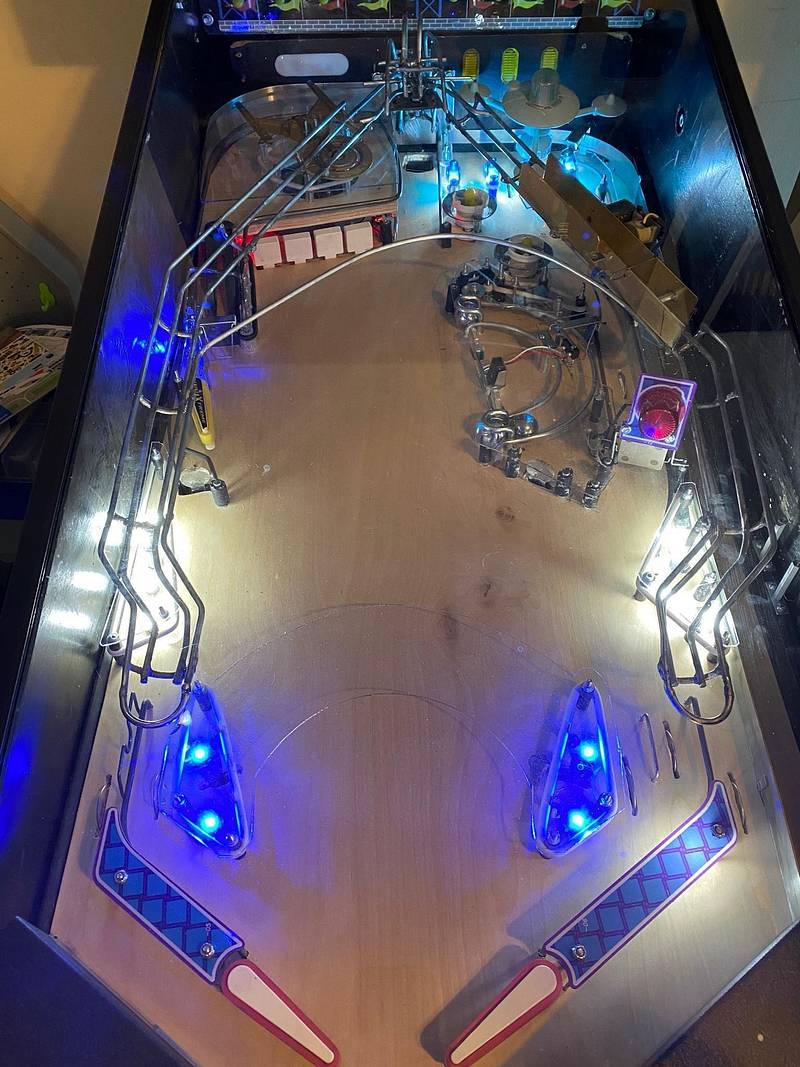 Putting it all together, and then one last detail: do not attempt to do this free hand! Get both 15/16 and a 1-inch forstner Bits. First step: Use a drill press and drill approx 1/4 inch deep with the 1-inch bit. (Just a hint less than the height of the insert). Second step: Then swap to the 15/16 and using the same pilot hole left by the first bit, finish the cut through the surface. Note: Always use a drill press! Third step: Then use epoxy glue to glue the inserts in. Final step: Let dry and then you’ll be sanding the whole surface down to be perfectly smooth.

Look in here for new insert instructions even though this is a restoration topic:

I guess I am buying a drill press! Thanks again for all the info. I will do my best on scrap wood until I get it down.

You're not going to get near the centre of the playfield with a drill press....unless it is a great big one.

You're not going to get near the centre of the playfield with a drill press....unless it is a great big one.

Wow! What a difference. I bought the forstner bits. I did one by hand just to see the cut. The insert is snug and I had to tap it down to be level. Thanks for the information about the right tool! I am trying to find a drill press now. Where I want to put some are pretty deep. I might have to do by hand. I really appreciate the tips from all of you. This is great use of pinside. Not a complaining post. A lets help each other post. 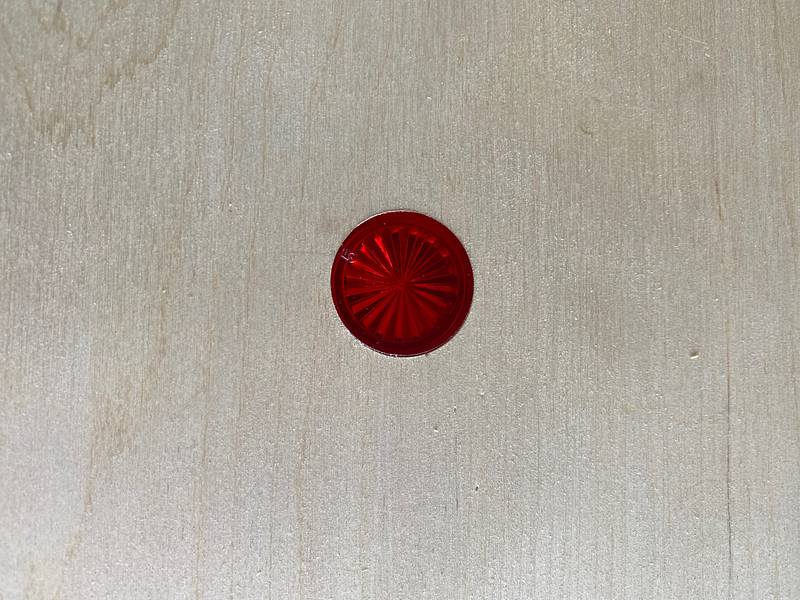 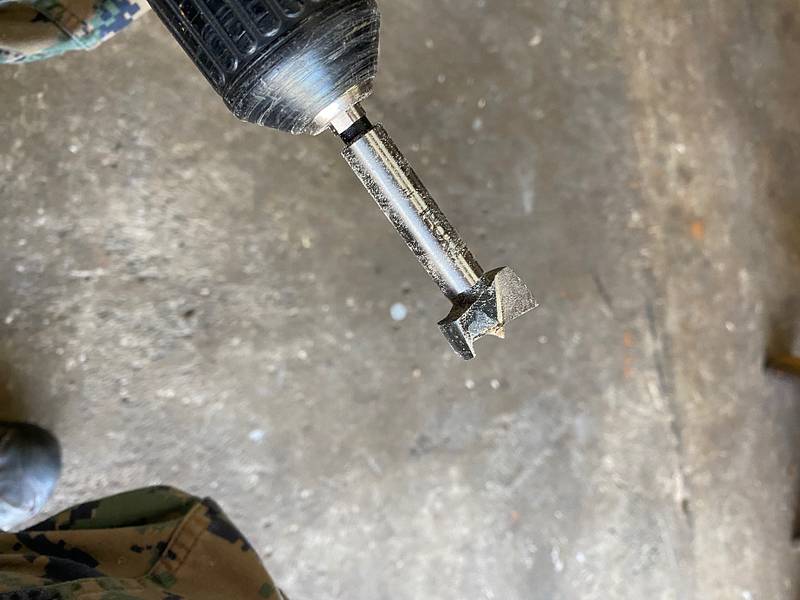 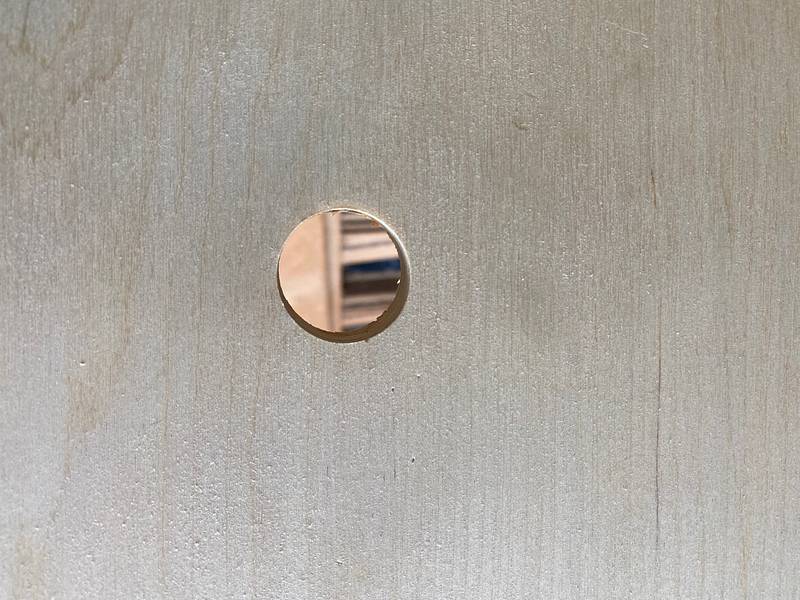 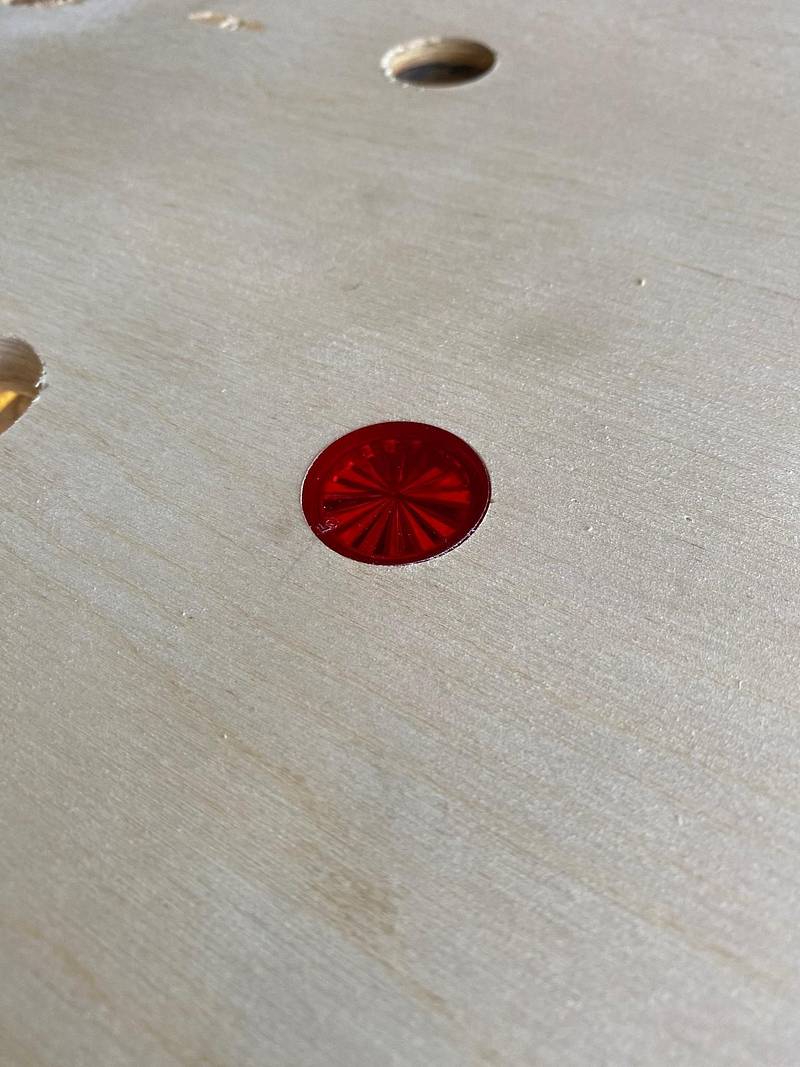 Wow! What a difference. I bought the forstner bits. I did one by hand just to see the cut. The insert is snug and I had to tap it down to be level. Thanks for the information about the right tool! I am trying to find a drill press now. Where I want to put some are pretty deep. I might have to do by hand.

Be sure to check the link I provided, great detail on new insert installation.

I found a portable drill press from a supplier at my job. Midwest tools sells it. $40 and it is awesome. Adjustable angles and depth. I did not want to pony up 700 for a big enough press to do the inserts on my playfield project. I thought this might help others if they search for insert help. 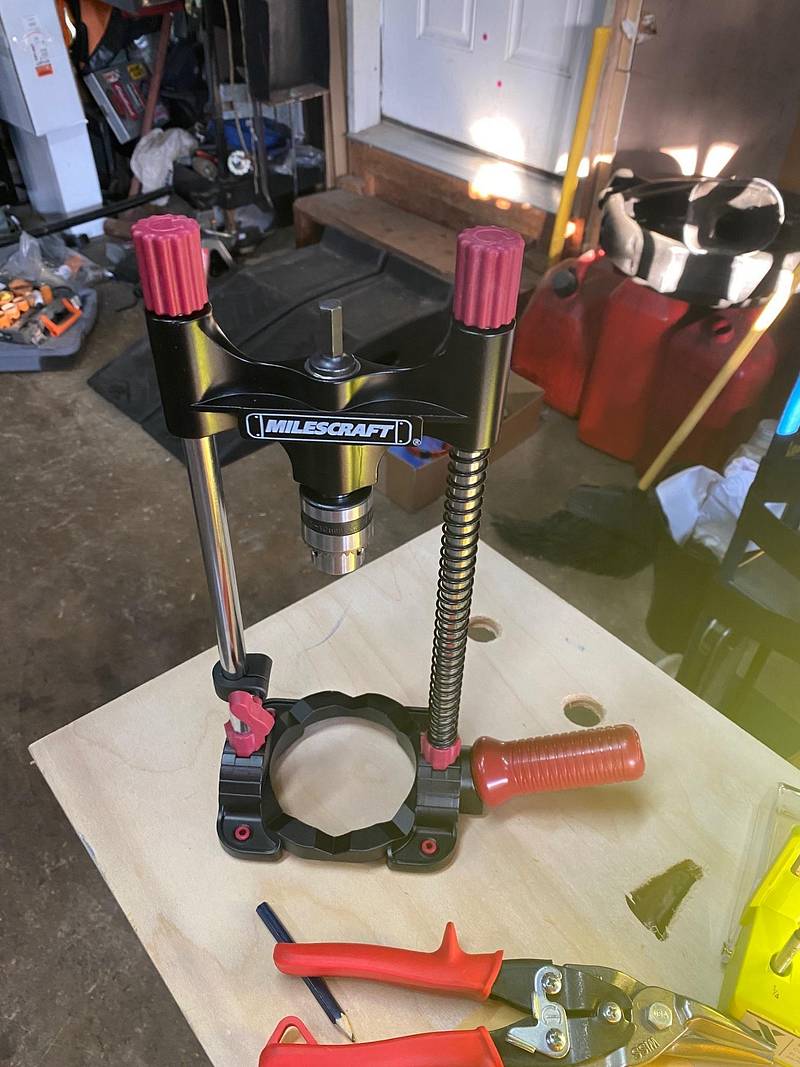 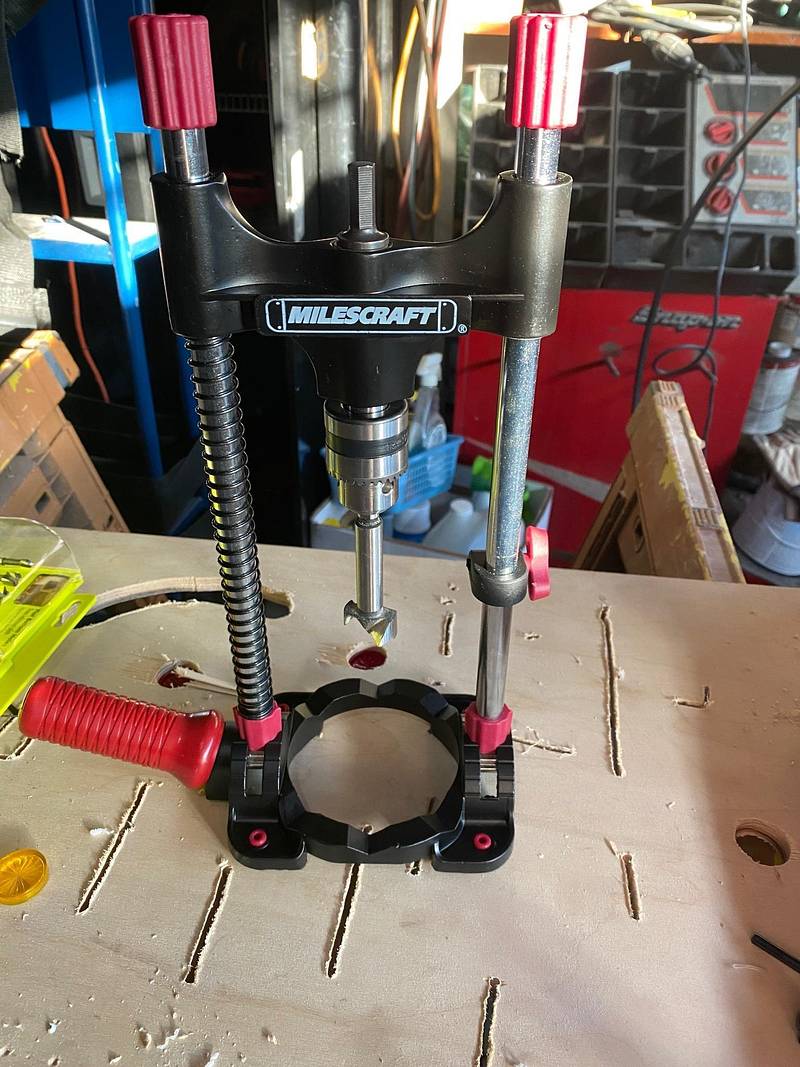 You're going to find that isn't stable enough. You can't hold it tight enough to keep it from walking, the cheap chuck wobbles, the depth stop isn't precise enough, etc.

For the first couple of Harry Williams games I did, I used a portable drill stand (like a really bare-bones drill press that you lash your own drill into) and spun it around backwards so it had infinite reach, and then bolted it to a really big thick heavy board, then clamped that board down where needed on top of the playfield wood. (See attached picture)

It was a pain in the butt to align precisely, sometimes the dimensions involved didn't allow me to change bits mid-operation without unclamping the thing, and despite all the solidity, it *still* skewed under the pressure of trying to bore through playfield wood. That stuff is hard! 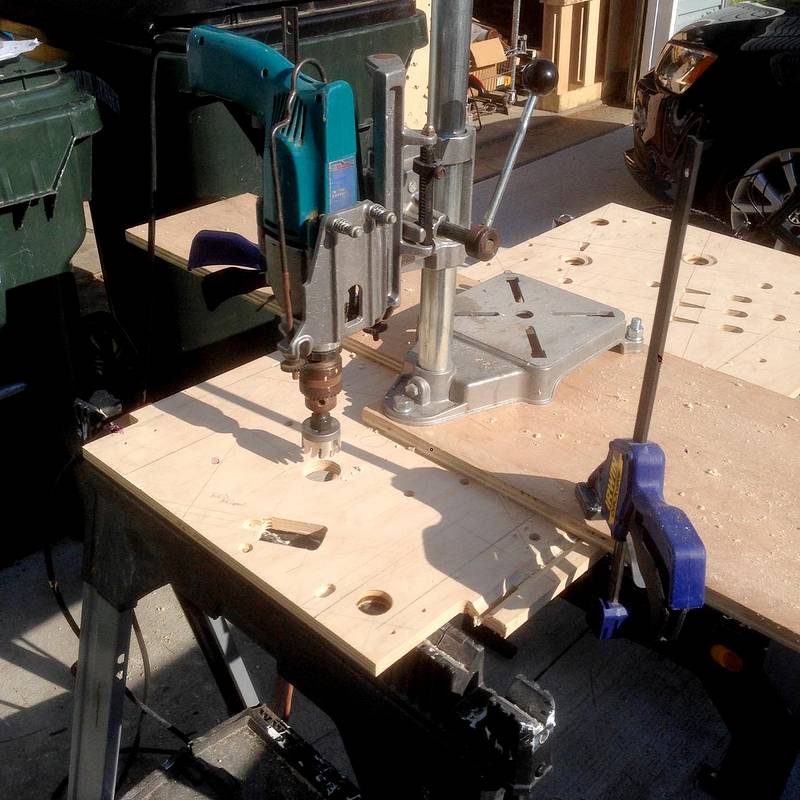 I agree that a solid press would be best. The arch of inserts I did on my game I would need a press with a good amount of reach 10”. Harbor freight has one for $700. If I was serious about making more playfields or using such a press I would buy it. It is huge and would work. I got all these inserts done by hand, so I went this route. If your slow the bit cuts very well. 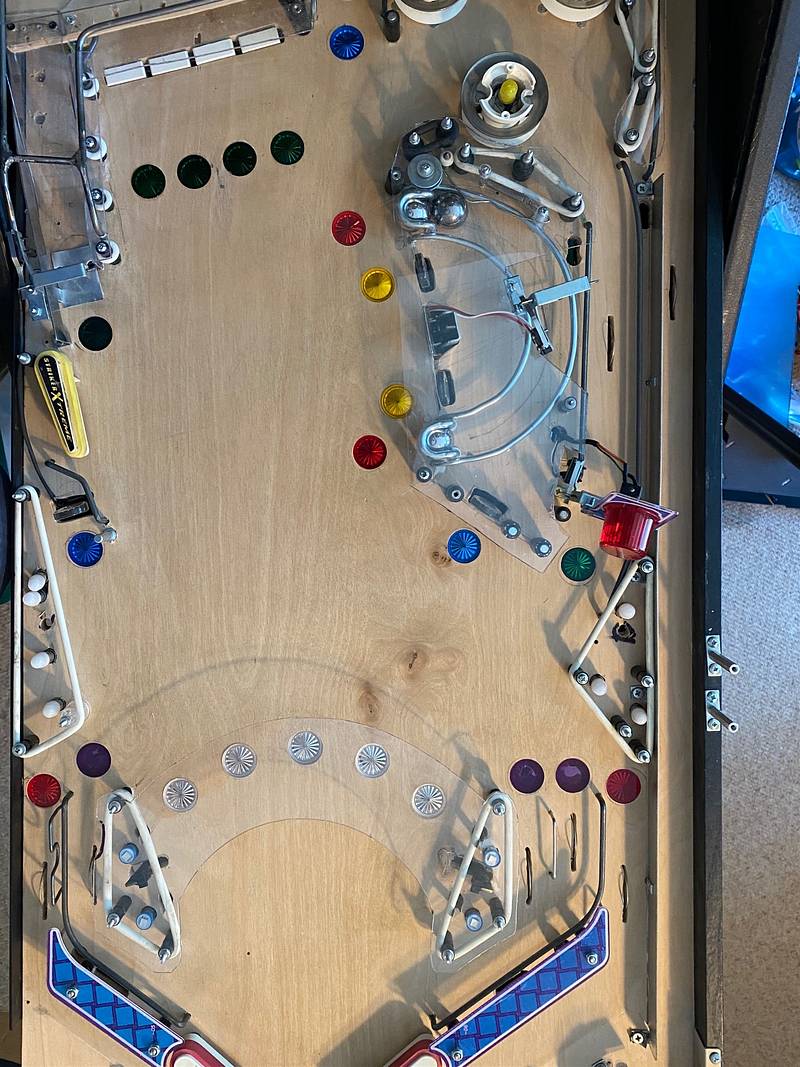 If you are not looking for a full size press I can tell you this set up works very well. I cut one hole to correct depth for the one ince bit and set the depth lock on guide off of that one and this works great. Fast drill and slow movement yeilds great results. 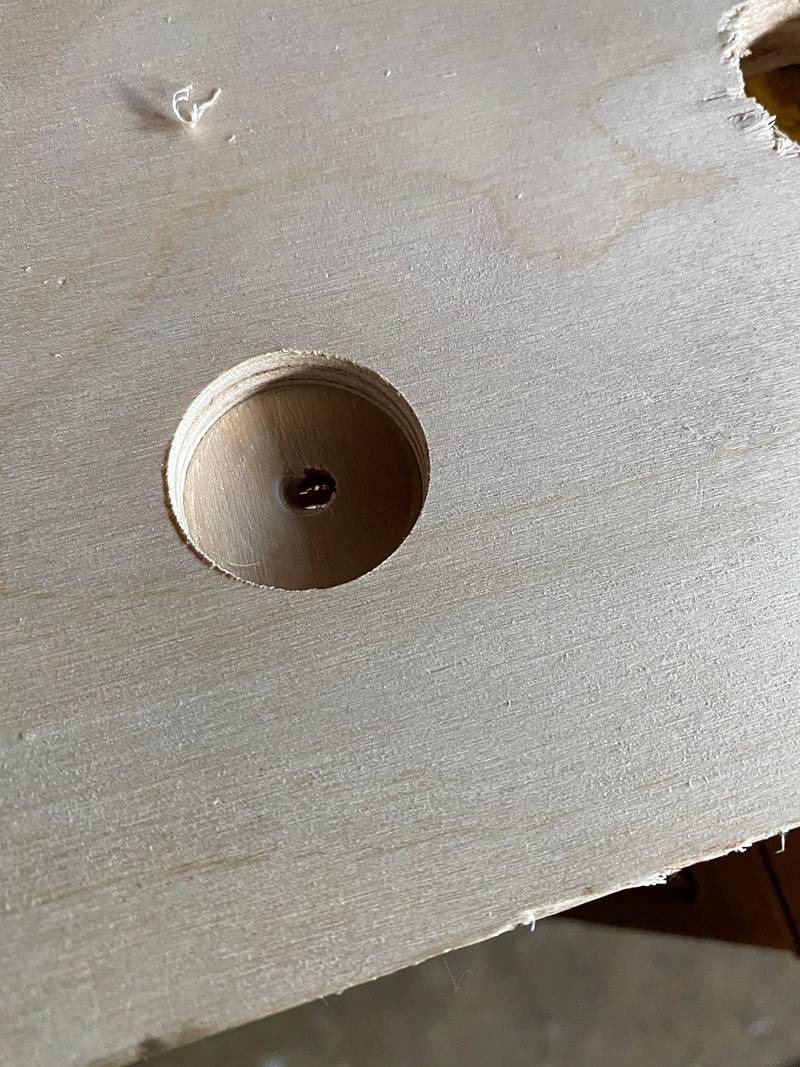 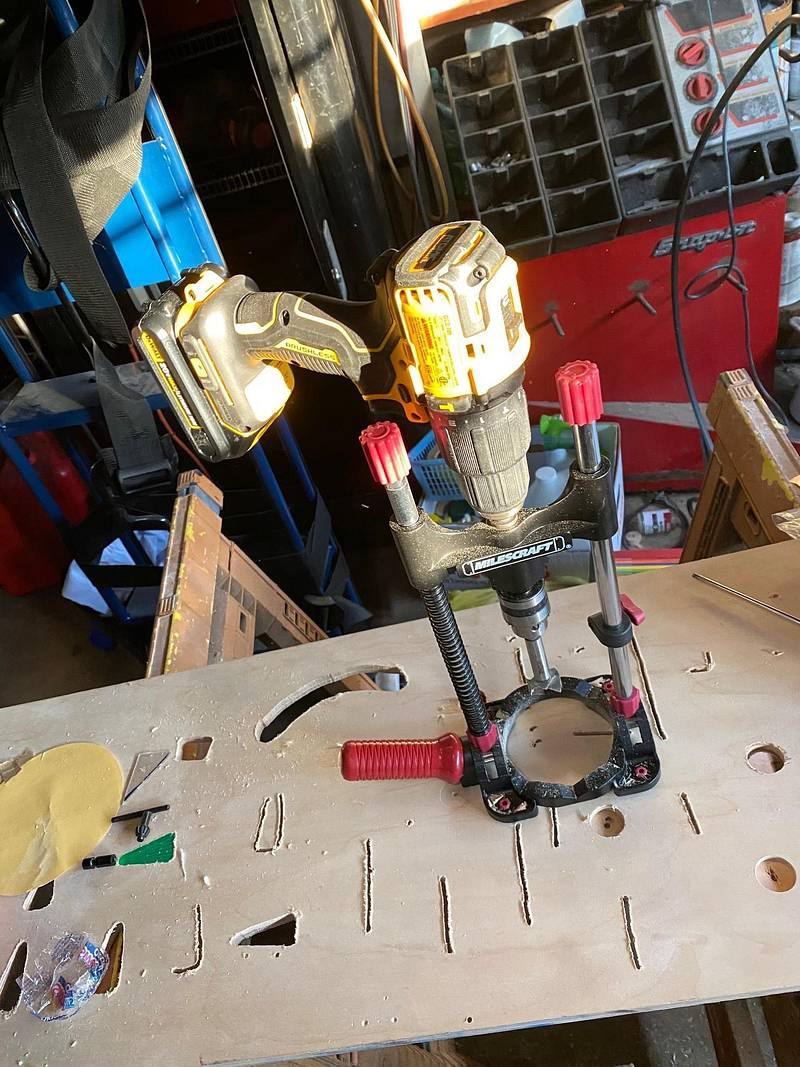 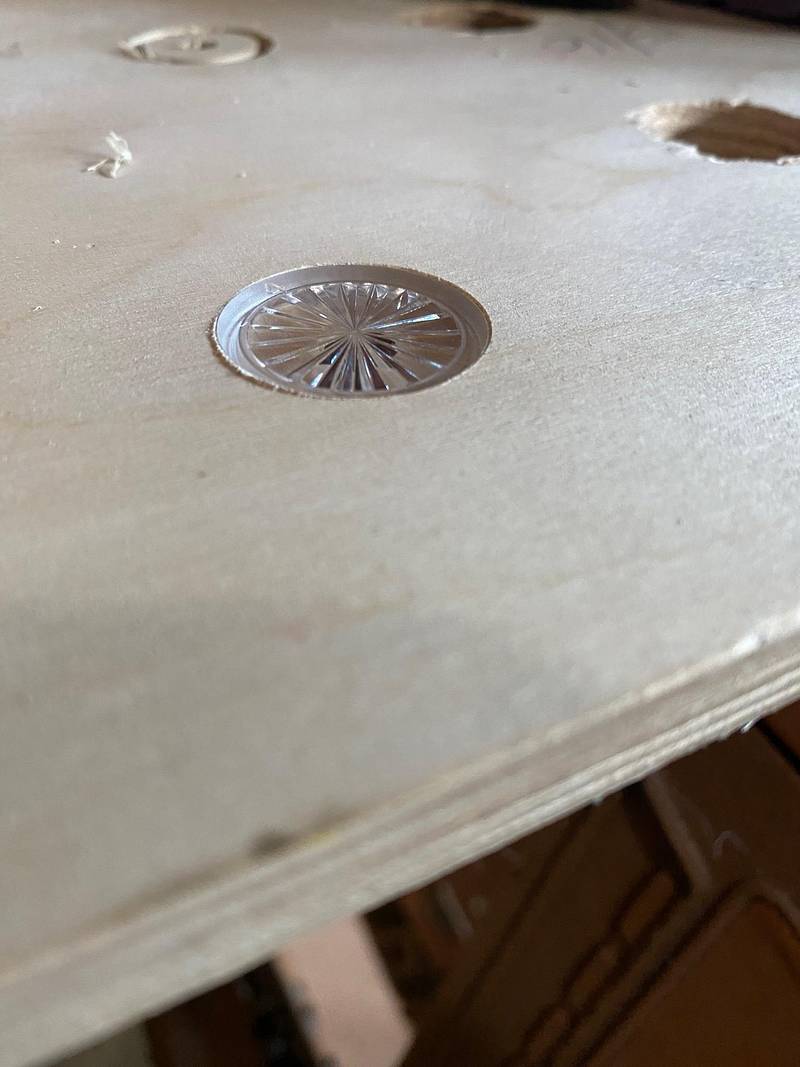