How Did Manufacturers Advertise Games?

I was talking to my wife about older pinball games a few days ago and she asked me something I never really put a lot of thought into. It's been on my mind ever since. How did pinball manufacturers advertise their new games to operators/dealers? I know they made flyers and sent those out because I've seen them with specific business addresses stamped on them. But is that the only way they did it? I would think they would've put out entire catalogues with their whole lineup in them. Which is what my wife thought too. But as I told her, I've never seen a pinball catalog just the flyers.

No idea on answer, but noticed you're from Calhoun. I'm in Adairsville (Gordon limits though). Nice to see another local person!

I have seen older magazines with pinball ads in them.

Flyers. They also brought them to shows and business expos to reveal to latest and greatest. They still do at places like IAPPA and the Toy Show, I know operators still regularly visit.

I would think they would've put out entire catalogues with their whole lineup in them. .

They generally never re-ran games, so there was no point. Places like Bally and Williams would make games until the orders stopped, then move on to the next. Gottlieb, as the industry leader, would pre-sell their games to their distributor network (which is why some good games are in low volume runs and why so many of their runs end in a round number).

They weren't selling to home owners or collectors, just operators looking to buy the latest in commercial coin op amusement devices. Did it make money? That's all that was in question.

There was no point in a catalog, since manufacturers back then made a single continuous run of one game and then moved on to the next. Unlike Stern, who makes smaller runs over time (while they have the license) until they retire a title. Once a manufacturer had moved on to the next game, they would reduce the price and closeout the previous game.

I always saw the ads in my dad's Playmeter magazines

You can see ads in old Billboard Magazines -- available on books.google.com 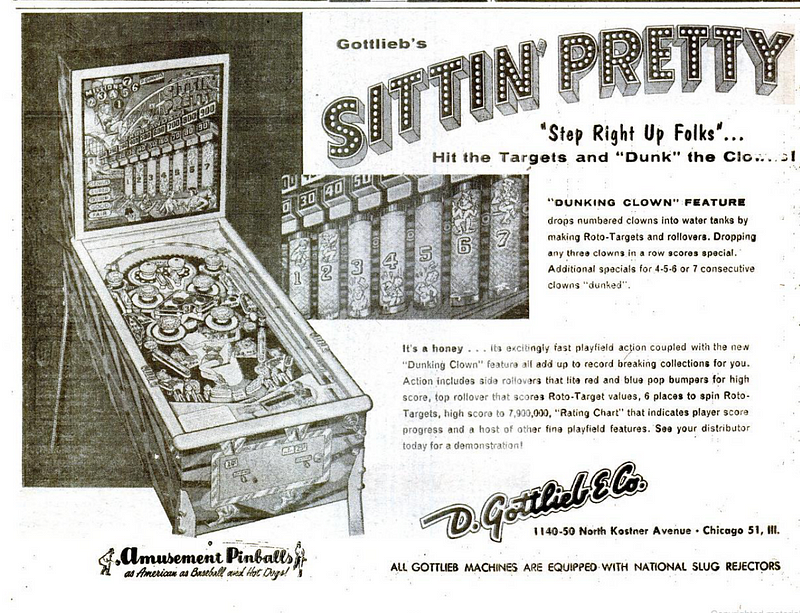 Trade shows and flyers sent to distributers. Remember the pinball collecting really only became mainstream in the last 20 or so years. There were one of collectors here and there but most of the purchasers were operators

Ads appeared in other magazines too like Automatic Age, Cash Box, etc. (many more at http://www.pinballcollectorsresource.com/refer.html).

Mike Munves published catalogs of games and other amusement devices for sale.

The manufacturers published catalogs but those were for parts (see https://www.funwithpinball.com/resources/parts-catalog-list)

How did pinball manufacturers advertise their new games to operators/dealers? I know they made flyers and sent those out because I've seen them with specific business addresses stamped on them. But is that the only way they did it?

I started following pinball in the 1960s and have filled in more historical details since then (and still doing it). I believe the following is a comprehensive answer to the question.
1. Flyers, as you say. Most were sent to distributors; more on that below.
2. Advertising in the relevant trade magazines of the time. Billboard, Cash Box, Vending Times, Playmeter, RePlay (which still publishes), or whatever.
3. Produce a press release and publicity photos, which were sent to the same trade publications.
4. Take booths at the relevant trade shows of the time such as the MOA/AMOA show.
5. Sometimes a company would go through a phase of doing direct mail to operators.
6. Pressure the distributors to do the heavy work. Distribs did much more of the direct mail, and nearly all the outbound calling, maybe even drop in to visit an arcade or operator's office, if the knew that the person with buying authority would be there.
I think the above is everything that would be expected of a Sales Manager in the EM era.
.................David Marston