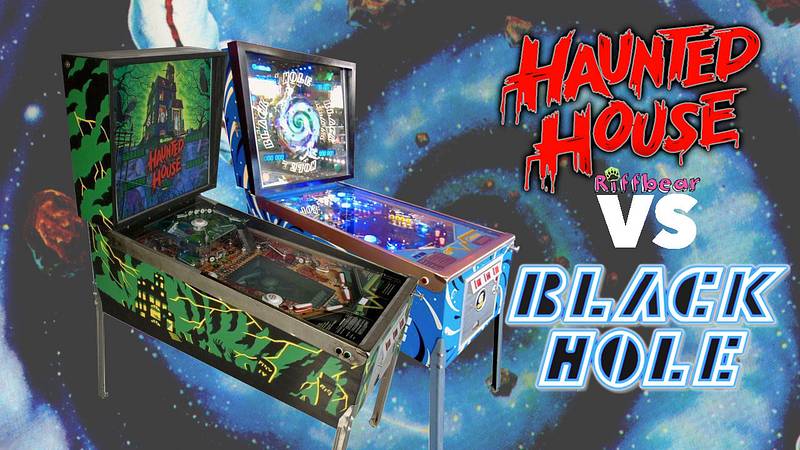 Tough call both fun games I like the haunted house theme more but I like black holes gameplay and layout more. So black hole gets my vote.

The only right answer is yes. You get both then no deciding needed.

Me too, and I prefer the sound of HH, BH is a bit boring, at least for my ears.

Black hole is such an ass kicker people complain about it, things like the ball drains the lower pf without completing a target bank you loose your ball. Well yeah, the ball drains you loose your ball.. anyway it is always a challenge. If I had the opportunity I'd buy a Haunted House and a Spirit also, because things are better in threes. If you get a BH and it isn't 100% working that could sour the whole Gottlieb idea it is cumbersome to work on HH probably not any better. I'd say try which ever one you can find in great condition and acceptable price, but most people rate them Spirit, Black Hole, Haunted House.

Haunted house is a really cool "world under glass".
But Black Hole is a great pinball game.

Both are really great games, tough call.
HH does have an upper pf, where BH does not. And while not of modern day ramps, there is a ramp to the upper pf on the HH, which is a nice feature and not present on BH.
I think HH music is a bit better in the long run, but for what is is and when it was made, BH music is fitting. I do like the creepy haunted music on HH though...
BH back glass, with the spinning circle and astronauts, when it is present and functional, makes a sweet reflection on the lower pf glass, which is a very nice feature and looks great. You do lose your ball if you fail the BH lower pf, which can be a drag, but can get you playing the game more just to show it who's boss. Haha.
Man, I don't know...I wish I had both, I'd play both equally..

Black Hole all the way. I have both and the only reason HH is still here is because I got it so cheap, $250 I wanna say. Boring game play.

BH for me, love the sounds and game play. Might try get my hands on one some day.

PS, love the extra effort you’re puttin in these VS’s threads with the banners.

I miss both of mine. BH is better with multi ball and risk of escaping the black hole though. HH sounds and looks great though. Again, both.

Black hole all the way!

The ball spends most of the time on the main playfield, and on HH's main playfield there just isn't much to shoot for. You're always trying to get back upstairs or downstairs.

Because the basement is dangerous on BH there's a lot more strategy in completing main level objectives before heading down there. And the two level multiball is just awesome.

Black Hole is a better all round for play. Haunted House is fun too, just not as fun as Black Hole. I got both and no regrets yet...

I have both, also had spirit too for the trifiecta but sold it last year. My BH plays much faster than my HH for some reason so that’s more exciting, but the constantly changing playfield levels on HH is super cool. Both fun games though.

Black Hole has multiball and speech. HH does not. HH, for me, has very long ball times.

Black Hole has multiball and speech. HH does not. HH, for me, has very long ball times.
I like BH much better.

My HH will have multiball and speech

I own both. BH will not leave. HH will be for sale soon.

I know a lot of people will disagree, but for me, BH wins this one on gameplay, looks and sounds.

Here's my BH when I shot a video of it a few years ago:

Both good games. Both difficult. Good art on both. Gameplay I'd have to give the nod to BH. Both are cool in their own way.

Black Hole > Haunted House from an objective player’s POV, but I prefer HH on a personal level just a smidge more.

“No one escapes the black hole”

Wow, both truly great games. And both truly a pia to keep running....imho.