New to the form.... Just wanted to put out there that I need a little help on fixing the lower basement on the haunted house pinball machine. I added a picture there's a red wire that must have been pulled out ,which is causing the pop up board not to function. anyone have any ideal? I got the manual on it...but cant make out heads or tails. ty 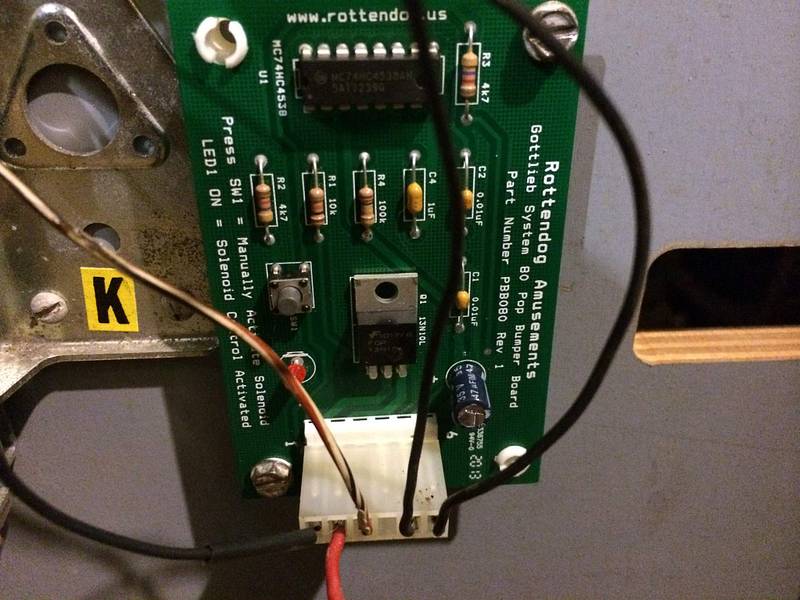 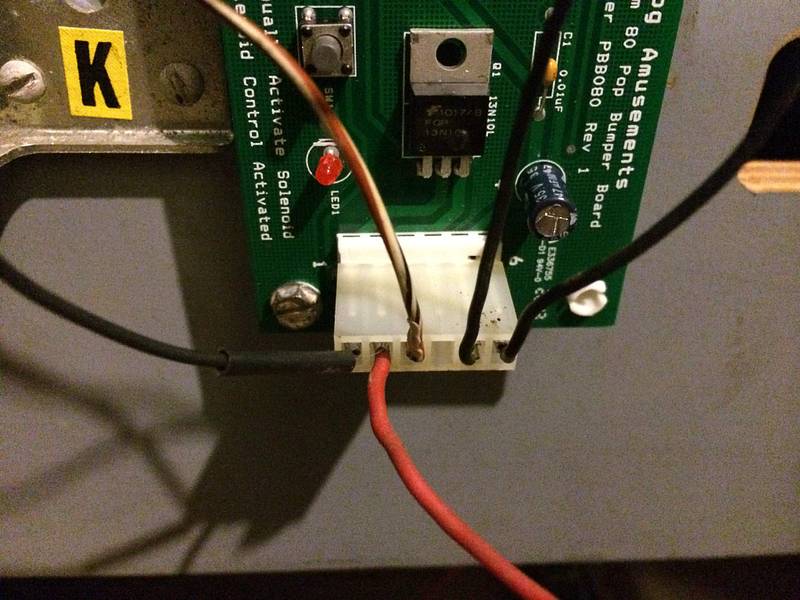 The red wire goes to the harness but from there its disconnected...that's where I don't know where it goes. other then that...the game works find. but the pop up board for the lower basement needs power. that's were that red wire
comes in hope someone can help me... thank you

That wire on the Rottendog board probably connected to the +5 volt wire at pin 5 on the connector of the pop bumper driver board also located on the lower playfield.

The connector pinout on pop bumper driver boards is:

Be sure your wires are connected correctly or you'll damage the board. In your picture, it looks like you have the connected plugged in WRONG! The connector pin numbers 1 and 6 are silkscreened on the Rottendog board but not on original genuine Gottlieb pop bumper driver boards.

Ok here is the deal, Haunted House from the factory did not use a PBDB (Pop Bumper Driver Board) on the VUK. They used a drive transistor, but the design was flawed and folks got tired of replacing burnt transistors/coils and developed an aftermarket field retrofit to add the PBDB to the VUK..

Here is the rework instructions and that should help you figure it out..

ok you say I got it backwards?? is there a exacted spot to solder that red wire? once I flip the connector around? Thanks so much for getting back to me
0
0
0
#6 7 years ago
OP
???

Ok here is the deal, Haunted House from the factory did not use a PBDB (Pop Bumper Driver Board) on the VUK. They used a drive transistor, but the design was flawed and folks got tired of replacing burnt transistors/coils and developed an aftermarket field retrofit to add the PBDB to the VUK..
Here is the rework instructions and that should help you figure it out..
http://arcadecontrols.com/files/Manuals/Black%20Hole%20-%20Haunted%20House%20Repair%20Guide.pdf
Refer to page 37 and 38...

I looked at page 37.38 I cant figure out were that wire goes to...unless you pin point it . I was never good at reading schematics... I am sorry. I can solder lol I know where the pcm board is and sound board are because I replaced those...but this wire doesn't seem like it would even reach up to that area
0
0
0
#7 7 years ago
RJP

Step one, look at your picture, see how you have two black wires on on end?

Where do those go? If they go to the coil then by the logic diagram I provided, they are pins 1 and 2.

Now look at how the connector is plugged into the PBDB, note how there is a 1 and a 6 etched on the board?

If Ken and I are correct, you need to rotate that connector so that the 2 black wires that are on one end, are toward the 1 side as etched on the PBDB.

Once you have that done, then the remaining wires, 4 5 and 6 are as follows;
#4 the one with the stripe should go off to the K relay right next to the PBDB.
#5 the red one, should be spliced into any #5 wire on the nearest other PBDB.
#6 the black one, should be tied to ground somewhere. And also plugged in near the 6 etched on the PBDB...

One you do that, if it still does not work, you can rotate that PBDB into any other position such as the 5 target bank reset to see if it is fried.

ok thank you... I figured it out... first of all you guys were right it was backwards... and I fix that.. than went right to 5volts on the red wire...and BANG!!!!!!! it works.... thanks again guys couldn't done it with out ya... now to fine tune some of the bumpers and kickers elsewhere thanks again