Let me start out by saying that I'm a Williams guy and have had lots of the WPC and System 9/11 games and enjoy playing and fixing. When asked by a friend of mine if we could get the Haunted House that's been stored in the garage all cleaned up and working I foolishly said yes - After all, how hard can it be? That's now been months ago and I'm about to throw in the towel. Let's start with the good news: The pin boots up and all score displays work. Before I started replacing bulbs, cleaning, and putting on new rubber everything worked but the drop target reset on the upper playfield and the VUK to the playfield. Fast forward to now and it seems like everytime I turn it on it has different problem. Here's a list of whats working and whats not working.

At 1 point when starting a game the Drop Target reset on the basement would fire continually instead of the trough kicker. I've cleaned all the edge connectors to the boards, all the pins appear to be in good shape. It's had some CPU work done prior and the work looks clean. I don't have a complete manual for it and I can't find a good troubleshooting guide. Everything I read discusses switch problems, bad displays, and game resets. I don't have any if these issues.

I know I'm ranting here, but if anyone has a Gottlieb System 80 For Dummies book, I sure could use it.

Thanks in advance for any help.

I have a repair guide. PM me your email addy..

I can use some details too.. look what I have to fix: 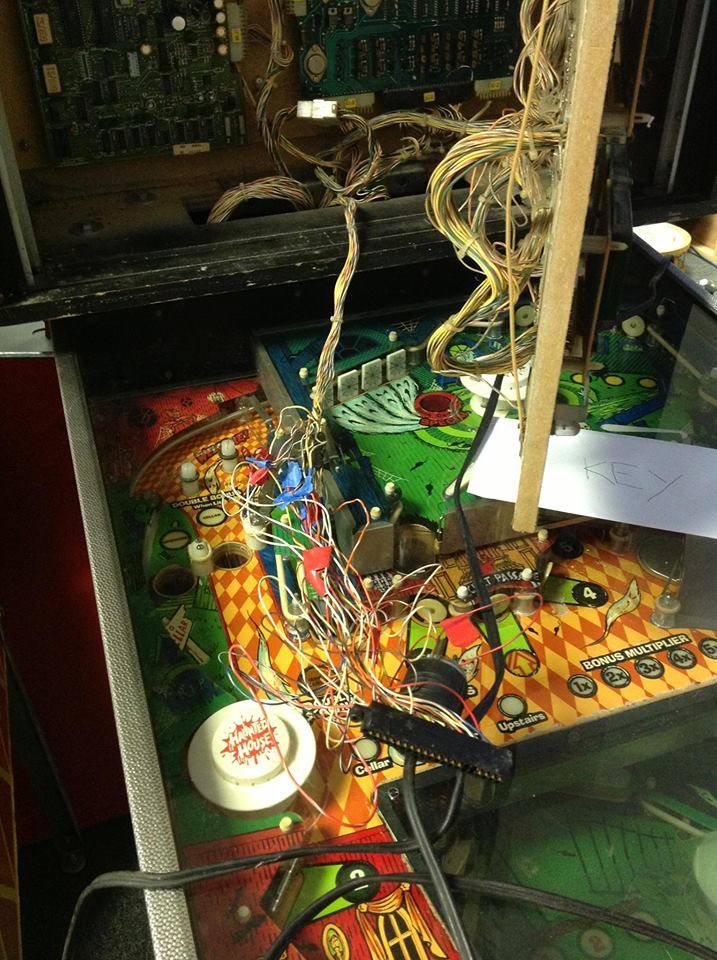 Anyone who wants the guide just PM me your email addy please.

Wow, that does not look fun. I'm restoring my HH right now as well, so let me know if you need pictures of anything. I'm going to be replacing all of the connectors soon.

Wow, that does not look fun. I'm restoring my HH right now as well, so let me know if you need pictures of anything. I'm going to be replacing all of the connectors soon.

Any close-up pictures of A1-J6 I can use, just to cross-reference the wire colors/position with the schematics and other data to make sure when I rebuild that connector, I'm doing it right, would be most appreciated. You can e-mail them to mike at pinballhelp period com.

Pick up clay's this old pinball DVDs that deal with sys 80 games, very informative. Also talk with blownfuse here on pinside. He is a sys 80 master.

Have you considered getting a new ni-wumpf MPU board? Maybe a new driver board as well, or rottendog PSU. Knowing you have good boards sure eliminates a lot of troubleshooting because you know they are good. My HH had a ni-wumpf & rottendog, & over 4 years never had any issues with it that weren't a simple fix.
Not super cheap to get new boards but at least you know they will be good for many many years. For an old sys80, methinks this is well worth the investment considering the issues some people seem have after 30+ years. At least start with the ni-wumpf.
At that point any issues are often just gonna be related to bad connectors, maybe diodes, stuff easier to deal with.

There's a lot of connectors with cheap cables assembly. They always fails on machine 30 years old.
I suggest strongly that you take a small screwdriver and push back each cable on that connectors back in the bottom where they supposed to touch the pins (v shape pins).
I resolve temporarely most 95% of the problems that way. For reliability it is better to change with new connectors with crimp pins style. Edge connectors usually are not a big problem.