Harry Potter Pinball - Who should make this pin, if available?

Curious for the results. I would favor JJP.

I have always thought this could. Be the best world under the glass and jjp could get this done right

But I'm biased. And what we've always heard in the past, is that the author isn't interested.

Not Stern. And that's not cause I don't think they would it justice I just don't want to waste a entire pin on kids who fly around on brooms. Leave it to JJP and their weird taste in themes. Kids and chocolate and magic and brooms.

Stern would just make a "generic" world based on Harry Potter, and throw one vague minor character on the playfield. And the bash toy would be a souped-up "GMC broom".
MSRP $17,950 (because they kinda used the license, which is expensive). Yes, I am still bitter about JP not being, well... actual JP

None of the others have proven they can tackle such an iconic and expansive license. Not that they are bad (Dutch excluded), just need to grow more to tackle such a title.

I think JJP could do it justice. It would probably be a "make or break" for them. A home run would solidify their market stance, and a miss would put them far behind the 8 ball financially.

Ka-Pow are the only ones who *could* make it - only they could make the pledge that all machines would be for private home use only, and make enough through Stern at the high collector's price to make it viable.

I think JJP is the obvious choice. It’s a theme similar to WOZ, but better. They will do it justice.

It’s going to be Stern, so deal with it!!

It’s going to be Stern, so deal with it!!

Yup. A magic wand on a spring for a bash toy.

I'd be fine with Elwin doing it for Stern, but yeah, JJP seems like they could add a lot of fun toys.

This post was moderated 1 year ago: Don't Make Things Personal

Stern would just make a "generic" world based on Harry Potter, and throw one vague minor character on the playfield.

Dobby! It will have a little sock hanging out of the coin door.

I didn’t realize Canadians could be such a hardcore badass!

No need to be a 100% asshole and crude. Stay classy Toronto!

PS post your airport code in the pinside fight club thread. Thanks

OK,I see you haven't been paying attention,all of you,so I'll go over it again>There will NEVER BE A HP pinball!!!! The author will not give license for a pin,she stated she "Didn't like the places where they are played""This thread is over!!!!

Says the guy that owns a game that comes with a little cute feather.

these threads are always dumb excuses to shit on whatever company you feel like shitting on at the time. 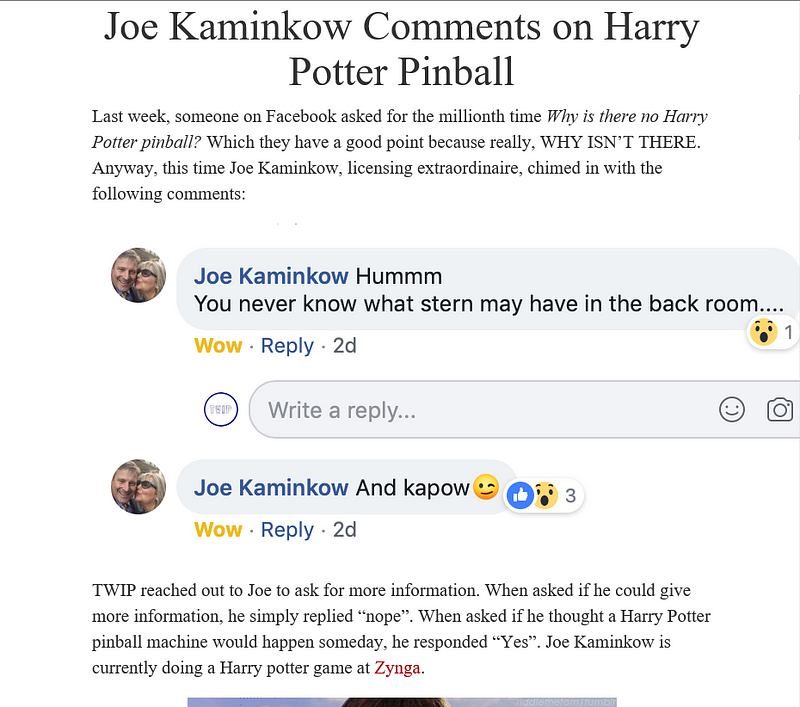 This game is never happening. Don't you think everyone has already tried? This is another Spielberg deal... Spielberg don't allow footage of his movies to be placed into pinball games, so many of his movies won't be pinballs. Prime example not even the CGI DINO's from the movies made its way into the game much less the actors. Blame Spielberg he's got that kind of veto power on all things he does.

Which brings us to Harry Potter, the author of those movies is not interested in pinball. She's now a multi billionaire. Universal is now making her money hand over fist with the Harry Potter Worlds. Her books fly off the shelf, Warner is making even more movies ... she's very particular about licensing anything. She has total control. If it was up to the studios it would have been done already.

I don't think you will EVER see this pinball. With that being said JJP should make it because they're the best at theming. I feel it would be a collector type of pinball with many fans around the World. Hands down JJP!

As for the previous comment, Stern has teased Harry Potter before and nothing happened. Its funny how Stern doesn't tease about ANY title but this one because its not happening.

JK Rowling sees pinball as gambling and has flat out said no. So unless this was a home unit with no coin door this will never be made.
1.) Not a fanboi - but JJP is absolutely the ONLY one that could do this title justice. However I'm super soured on JJP to the point that company will likely never get another thin dime out of me so I seriously hope they don't make it.
2.) Stern would likely F-it up by doing some bullshit Photoshop artwork like they do to everything as of late (I'm mad about GOT too) Node boards are garbage too.
3.) Spooky - nope.
4.) AP - mmmmmm while artistically I believe they'd do it more justice than Stern and even JJP, the coding piece would likely be subpar.

If it ever sees the light of day, I suspect it will be another half baked Stern product.

but JJP is absolutely the ONLY one that could do this title justice.

We both agree there. Hopefully whatever your issues with JJP are you can work them out. Keep in mind JJP has done a lot of titles with Warner: Hobbit - OZ - and Wonka.

So they have a history there. If anyone thinks even for a second they haven't asked you're totally nuts. Its not available.

I hope Kapow can get the license. If the designer of virtual Harry Potter pinball says he might get the real world license, that trumps previous stories about JKR’s reluctance. Typical license timeframe is 2 years, backing out six months production means the earliest we could see this pin would be June 2021, same time Spooky’s R&M run is complete. That is a long time away and even then it would likely not occur until the end of 2022. Can’t waste time getting excited about that.