I've got an early Atlantis coming in for a restoration soon. It's an early model as it has the half-moon shape replay counter. Looking at the IPDB images and info, none show a 3rd flipper. I have not physically seen the machine, only have images ( see attached) but there is a 3rd flipper. What do you think, has it been added afterward at some point in its life?
II dont as yet know its serial number though I've asked for an image of it. 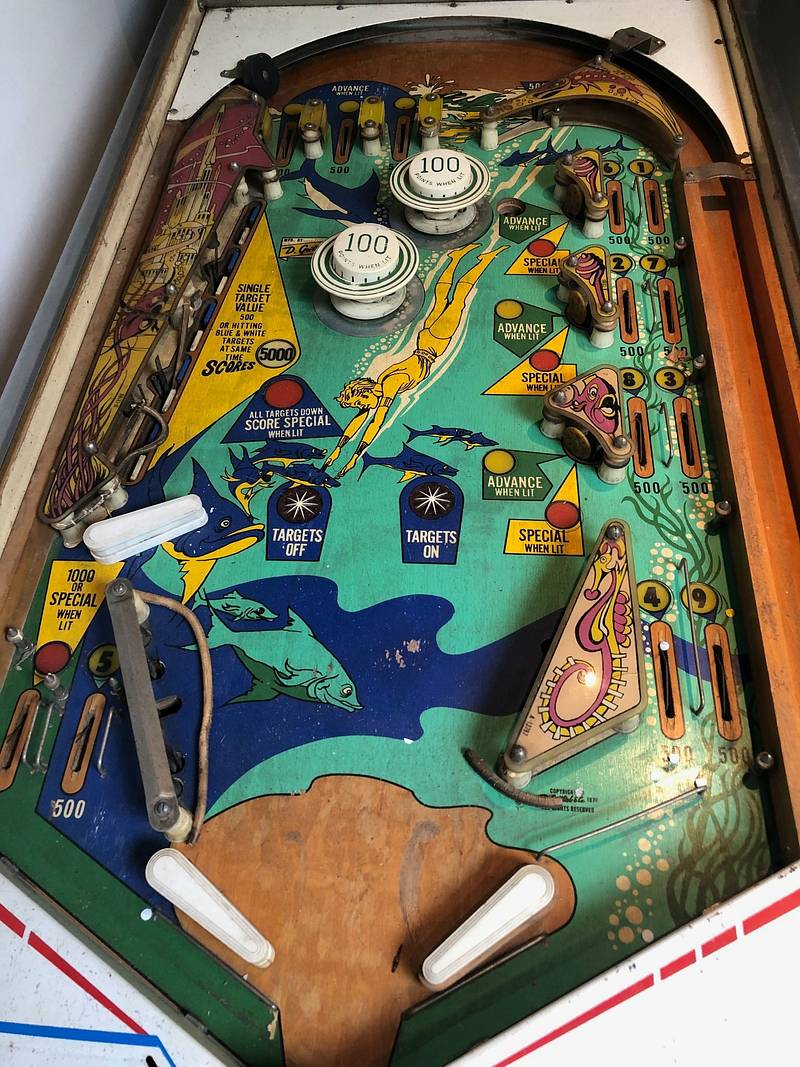 Must have been added. With it, those outlanes are impossible to hit. Brenner wouldn’t design a game like that.
I want to see the half-moon counter.

If that wasn't an add on I'll eat a bug. If anybody at Gottlieb put a flipper in that stupid location they would've tossed him out of the building thru the plate glass window.

Yeah, I quite agree. It seems daft to put it there because it blocks the targets and impedes the ball from going into the left outlane.
I've asked for some images of the underside of the playfield to see what's going on with the wiring. 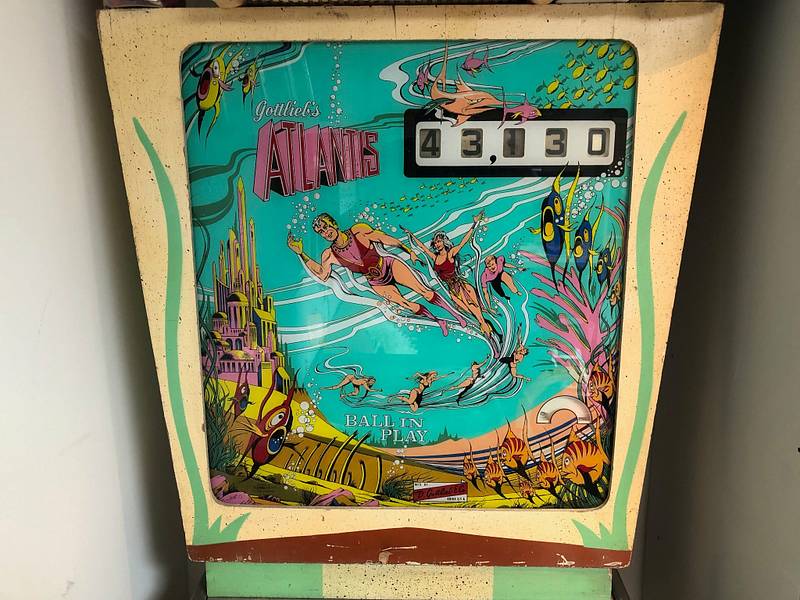 And it might be time for a rubber ring refresh... We hates it when the rings start cementing themselves to the pf.

Good luck patching that hole and fixing the paint. With Wade having reproduced this playfield you could probably find another used pf that might be a better candidate for restoration. But of course you are across the pond and do not have ready access to the US parts market.

I have a England based restorer that may be able to source a pf for you. Reach out if you wish.

Atlantis is one tittle where the backglasses really held up over the years.

Assuming no other playfield could be found, I’d pull that abomination out, fill the hole with a dowel, scrape/sand it flush, and lacquer over it. Basically fix it as if it was a guitar with an extra hole added... There will always be a scar, but the game will play as it should and the rest should clean up nicely. Looks like a worthy project on a popular game.

that flipper would serve no purpose as you can hit every shot with the standard ones and it appears to be blocking the ability to hit the lower left targets.

I’m curious to know if someone just threw a bat on there or if it actually functions as a flipper.

I’m curious to know if someone just threw a bat on there or if it actually functions as a flipper.

If it's locked in that position, it's just a ball trap... you'd never be able to play without glass off.

It also blocks the targets above it, so they can only be hit with the right flipper. It's such a weird addition.

If the owner wanted to stop drains on the left, to give a better chance @ higher scores and longer games, he coulda just stretched some rubber over that lane. A much easier solution.

Maybe his flippers were dying and he wanted some boost to get balls higher in the field. Whatever the reason, it's lame and complex. 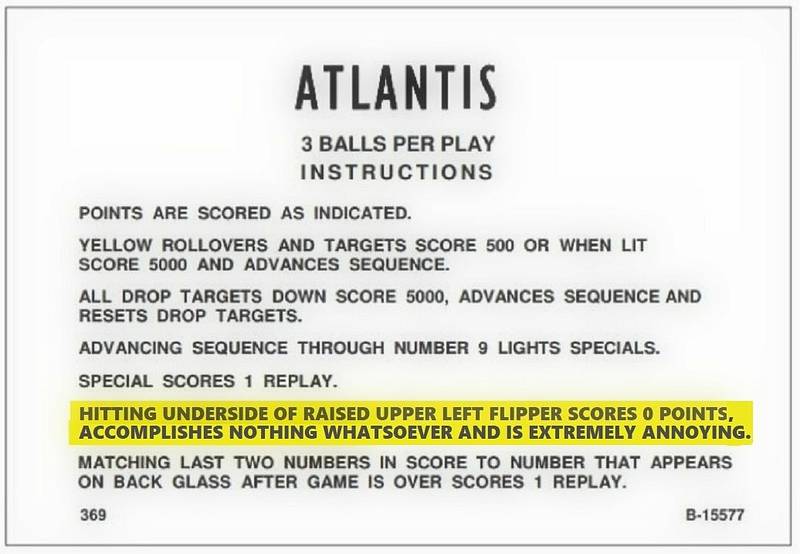 If it's locked in that position

My guess is a hole was drilled and they just plopped it in there and tried to secure it, poorly, and probably came loose over the years.

When I get home I’m going to look at my Atlantis and see how intrusive it would be to mount a flipper plate there. I’d guess a drop target reset coil could be in the nearby area.

The weirdest was probably a Stars where someone had installed a spinner in the center of the playfield.

It reminds me of King Pin, from Gottlieb, where you can get the upper flippers to back hand the ball right down the drain….

So annoying, but the game is enjoyable and so well done that I can tolerate the stray slap to hell.

Hmmm you could fit a 3rd flipper coil and such in there…. 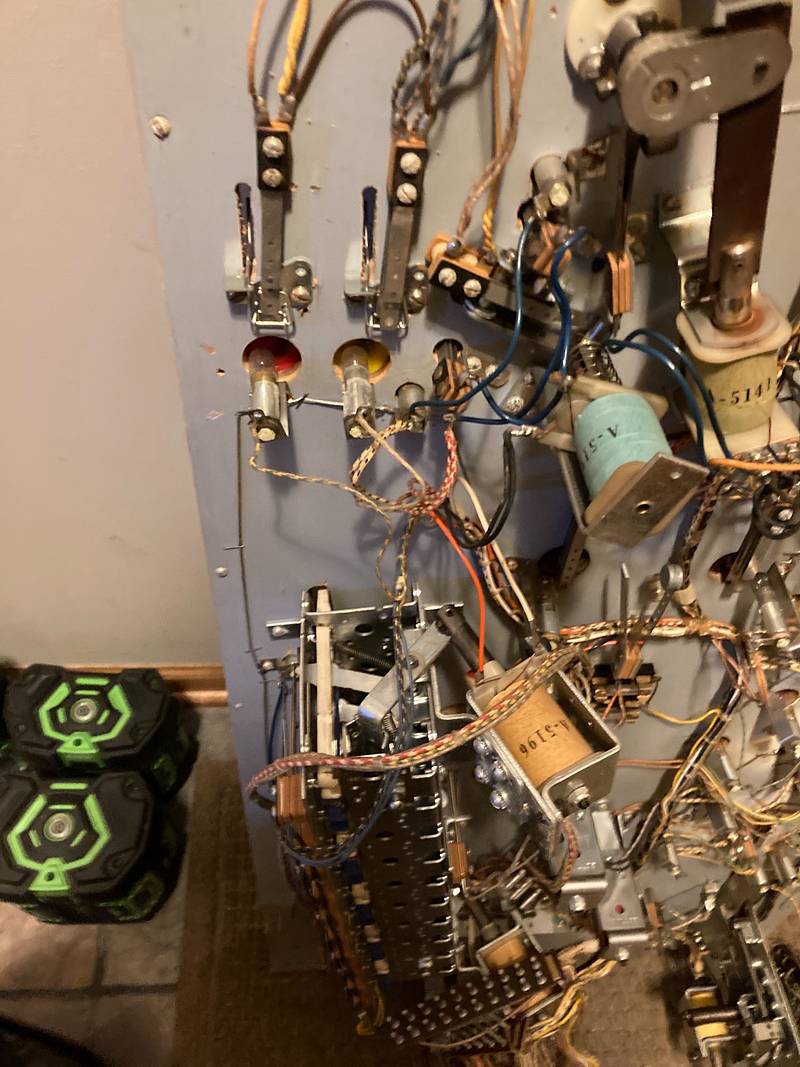 The machine will be in the workshop in about 5 weeks, or as soon as the PBR order arrives (u.k customs

) so I can update this. The owner cant open the machine up as he' s lost the door key and he doesn't remember if this flipper actually worked or not

I do think think it has to be an after market thing, makes no sense to put it there!

Time to drill out the lock...

I thought that too but what are the odds that a flipper would just happen to be laying at the least horrible place and position to add a flipper to this game. Still like 99% horrible, anywhere else is 100%. XD
And what's with the #4 rollover, looks like a nail is jammed in it. One thing I wonder is maybe that flipper came loose and it is actually supposed to be normally down and was intended to flip up instead of flipping down to block the outlane.