I recently got the opportunity to play a second Ship Ahoy (Add-A-Ball version of Buccaneer) and quickly noticed how differently a like machine can feel. One obvious difference was the center swinging target, which activated on the first machine as soon as the ball moved it as opposed to the second machine which did not activate until the ball made it do a full spin. With the playfields up, the first machine had the rod weight positioned below the switch while the second machine had it positioned above the switch (see pics). Positioning the weight below the switch seemed to make more sense, but considering how many incorrect things I’ve already found and unable to find any diagrams of an original assembly, was hoping someone here might know how a swinging target is supposed to operate. 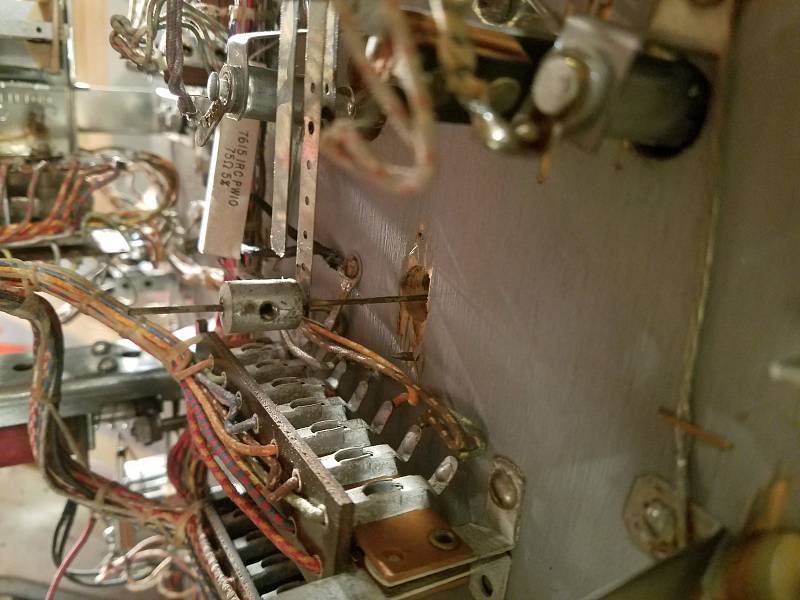 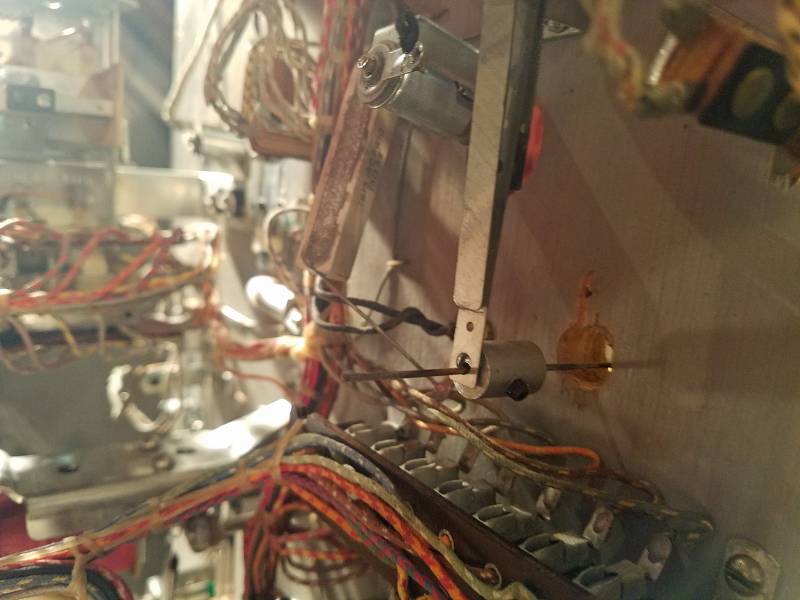 I had the same question but by watching at IPDB :

SHIP AHOY : the rod weight is positioned BELOW 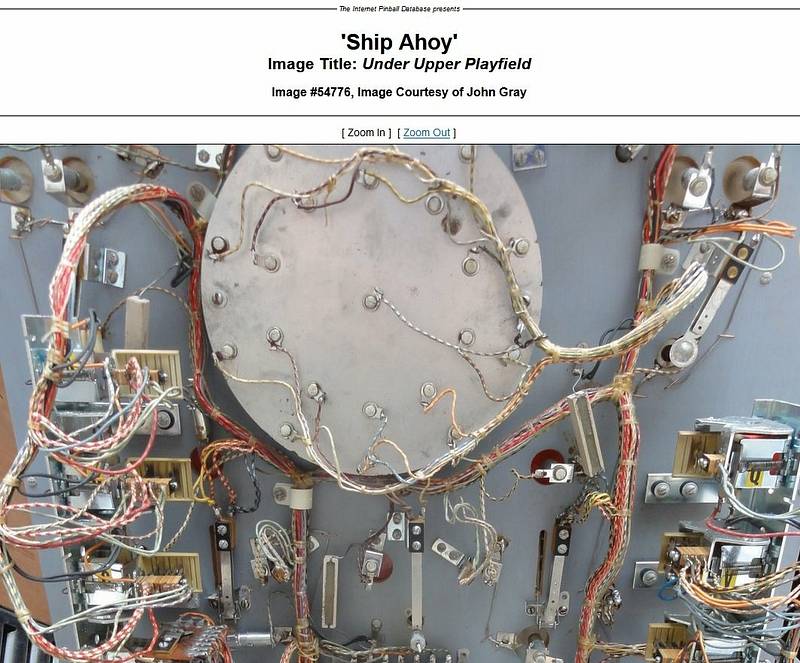 BUCCANEER : the rod weight is positioned ABOVE 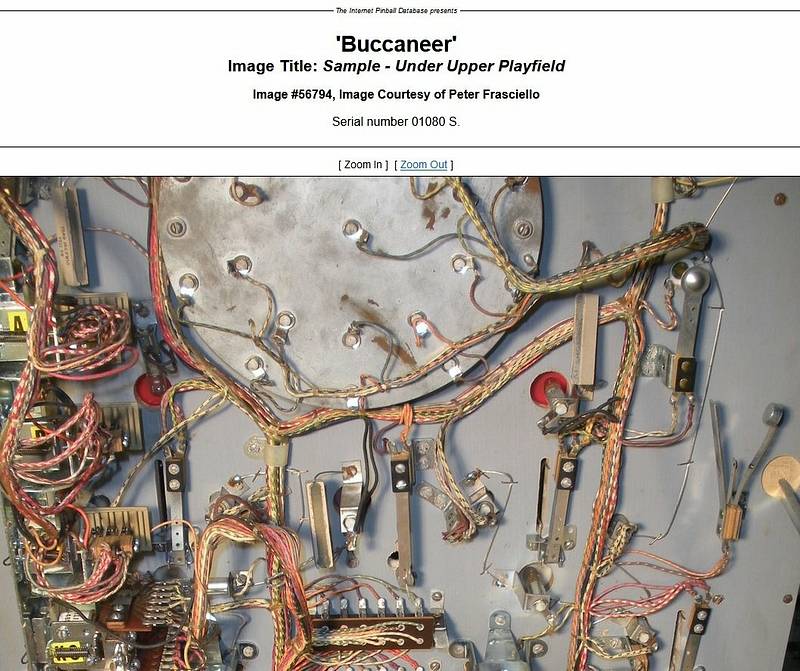 I didn't think of checking IPDB, but still leery of modified machines and was hoping for a factory diagram of the assembly. The only one I found was in the Gottlieb 1978 Parts Catalog Vol P, but unfortunately just showed a double switch with the weight positioned between the two sets of blades. Thanks, Jeff.

But even if factory correct, why would a Ship Ahoy differ from a Buccaneer when the assemblies use the same parts? And from an operational point of view, should a ball be able to slide under the swinging target without activating it if it does not complete a full spin?

The weight above the switch blades just looks weird. Normally the target pulls up on the blades.

That's how I felt. Having the switch rod weight above the switch made it spin differently, with the weight bouncing on and getting dampened by the switch leaf. The weight is about an inch high and with a strong light on the assembly, I could see a one inch discoloration on the target switch rod just below the switch, making me think it was originally there. At that height, the switch activates with any target movement; lower the weight on the rod will permit some movement without activating the switch, up to the point where about an inch lower will allow the ball to slide under the target and not activate the switch without a full target spin. I think several Gottlieb EMs had some type of spinning target, wonder if there is consensus on how sensitive they were set when new?

My 300 has the weight on the bottom of the switch.

I can’t check my machine at the moment, but I’d like to figure out how to keep the ball from getting stuck on the spinner when there’s a “slow roll” from the top of the field towards the bottom

I found this other pinside thread interesting with respect to alternative ways that Gottlieb machines hooked up the spinner linkage over time. 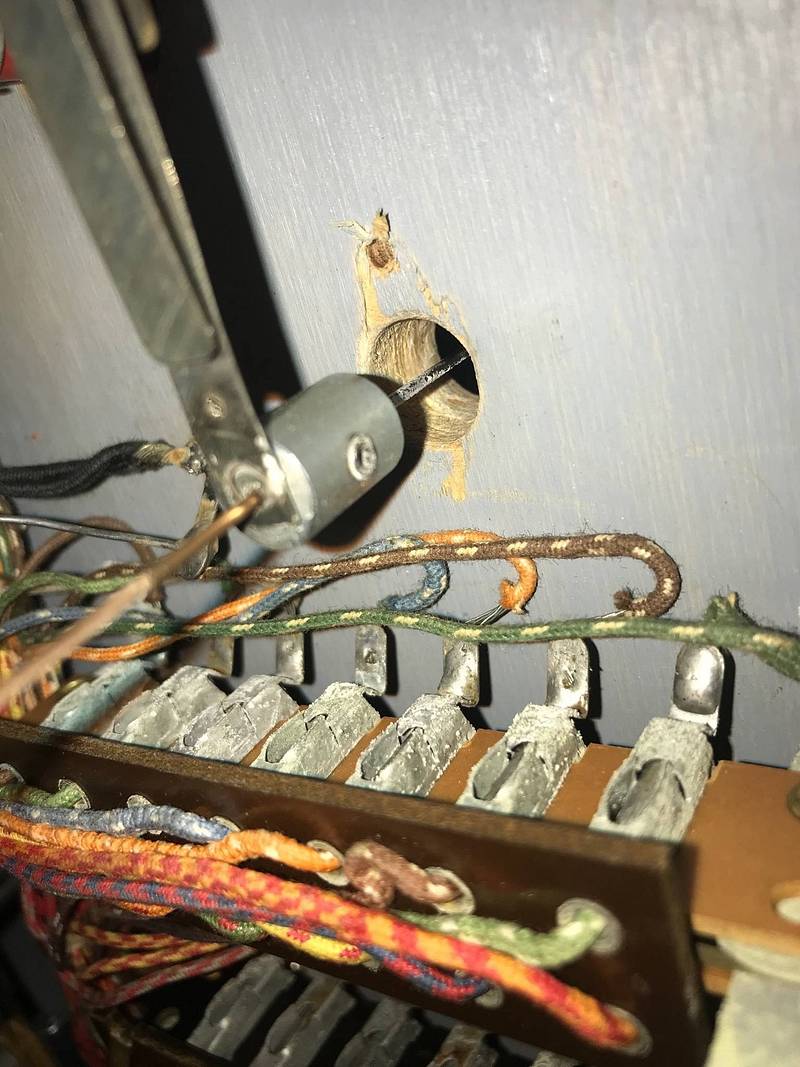 Seems that either version works, but the 'below' version is still weird. The long backing blade is there but it doesn't appear to be used at all. So maybe they used that version to get a longer spin, without the extra tension added each rotation by the backing blade. (?)

I always found it interesting that Gottlieb officially called this feature a "swinging target", whereas Willams called it a "spinner" because Williams had a different feature they called a "swinging target". That swinging target was found on machines like Heat Wave, Riverboat, Swinger/Funfest, etc and basically consisted of a standup target that used a motor to oscillate the target back & forth, thus requiring shot timing to hit it.

I got started with Williams EM machines and recall being very puzzled the first few times I heard someone refer to a (Gottlieb) swinging target because I couldn't find anything resembling what I was picturing in my mind from my Williams machines. 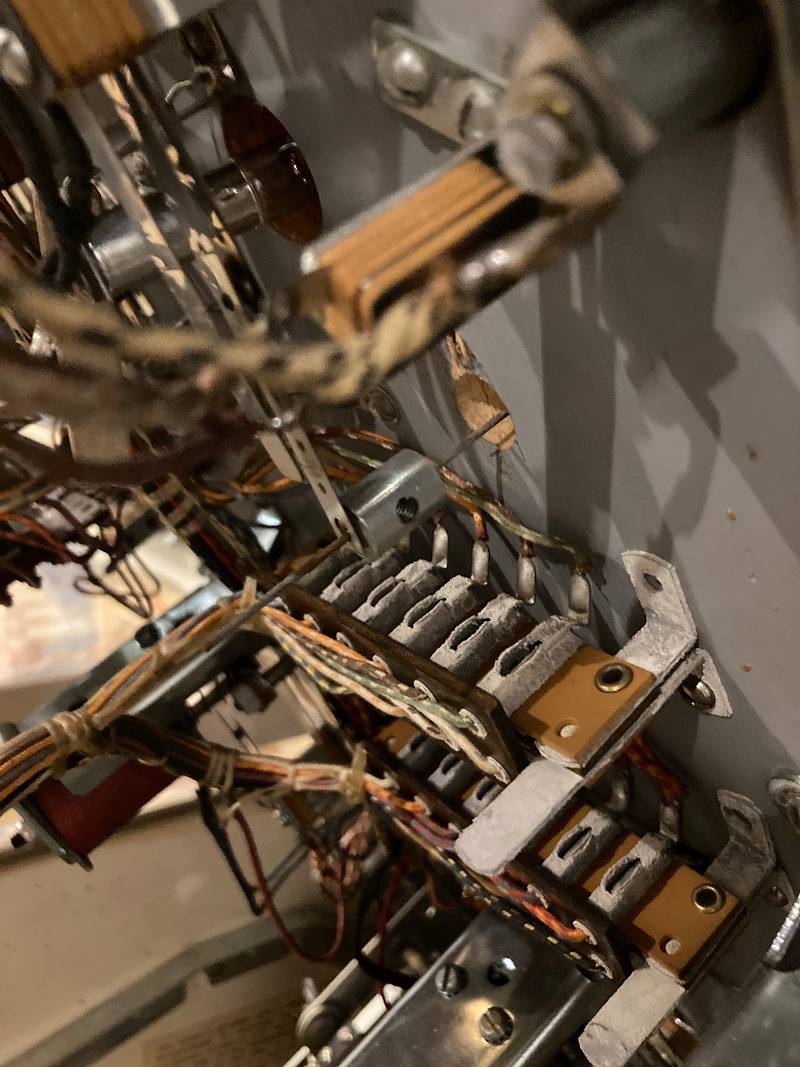 Because of the technology behind the spinner (that’s what I’m calling it) it does not matter if this switch is normally open or normally closed.

My game came like this too. I switched the weight to the bottom for a better spin.

Any exit from the pop bumper area will not trigger a turn of the wheel. A complete rotation of the spinner is needed to advance the wheel

Having tried it both above and below, you definitely get more spin from below. And looking at the two pictures from jasonspoint28 and Gotemwill, it looks like their target rods also have the same discoloration about the size of the weight just below the switch. But unless more people weigh in, its looking like most have the weight above the switch.

Having tried it both above and below, you definitely get more spin from below. And looking at the two pictures from jasonspoint28 and Gotemwill, it looks like their target rods also have the same discoloration about the size of the weight just below the switch. But unless more people weigh in, its looking like most have the weight above the switch.

I’ll have to switch mine and give it a try. I always thought mine worked pretty well, but maybe it can be better.

Let me know what you think. I like the additional action of it spinning faster and longer, and the yellow advance lights and scoring seems to keep up on my Ship Ahoy. One drawback of a longer spin is that the spinner needs to stop before the machine awards 500 or 5000 points when the spin light is lit, and if the ball is moving fast enough to activate a rollover switch before the spinner stops, the rollover points may be lost.

I agree
It seems like the weight was added to prevent a long spin on machines that had a spin and spot feature or used a capacitor delay relay that prevented other scores from happening until the relay released or the score for the spin feature was given.

So wait a sec.... in the 'below' version the switch is being closed by the rod and weight, but in the 'above' version the weight is only allowing the switch to close from it's own tension? Is that correct? If it is, the first version seems like a more reliable switch closure especially for one opening and closing so fast. (?)

So wait a sec.... in the 'below' version the switch is being closed by the rod and weight, but in the 'above' version the weight is only allowing the switch to close from it's own tension? Is that correct? If it is, the first version seems like a more reliable switch closure especially for one opening and closing so fast. (?)

The weight being below is much more forgiving.

I am new to this, but have already learned that these machines get so many field modifications for repairs that you can't assume anything is factory correct just because it works. All I know is that after trying it multiple ways, I prefer the weight on the bottom, positioned just below the switch so the ball can not pass under the spinner without activating the circuit. Does anyone know for sure how the factory set it?

Am I seeing things or does that first pic show the switch point(s) is missing?

I'm a little confused by which version is the 'above' or 'below' since it's under the pf and the pics are sideways, so...

the version that lifts off of the switch allowing it to close by itself looks like you need to dial in both the actuated switch blade and the backing blade, so neither one pushes up on the rod and leaning the target to one side. And adjusting the switch for good closure and enough gap. The other version seems more foolproof as far as adjusting it. 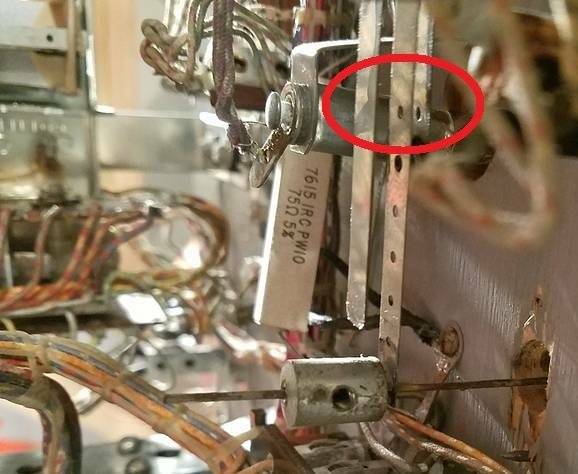 You’re not seeing things, that is how it looks in that pic but the switch points are fine. Good spot.

So this brings me full circle to question where the weight was located and how the switch was adjusted when the machine left Gottlieb? I am tempted to try adjusting the “above” version switch to normally closed to see how much it affects the spinner response, but in the end believe the maximum impact would just make it play like the “below” version. 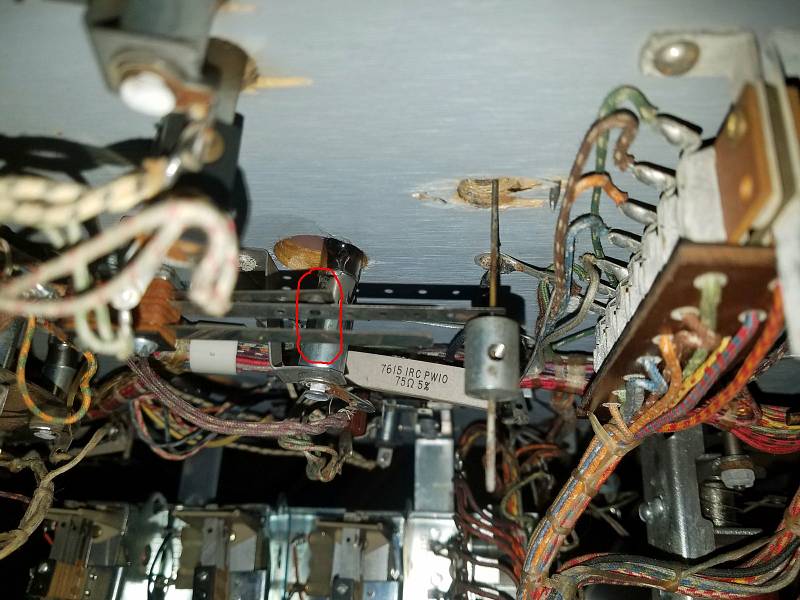 Here's how Gottlieb showed one in their '78 catalog. Doesn't really help much. That one uses two switches that close alternately, similar to a Gottlieb rollunder. 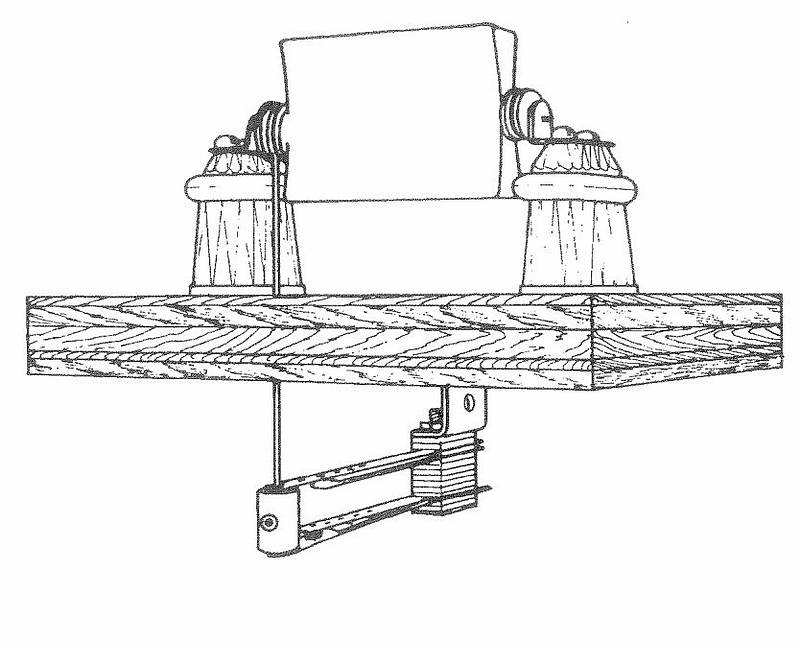 I bought the Gottlieb 1978 Parts Catalog Volume P from PBR and read it like a novel. While it has a lot of very useful information, I also felt it left a lot out by showing only selected assemblies, playfields, part lists, etc. I wondered if there were other volumes?

Based on the post from kangourou, I looked at the playfield of all the 1970’s Gottlieb EMs, found 15 (Pro Football, Jungle, Super Soccer, 300, Top Score, Buccaneer, Ship Ahoy, Surf Champ, Surfer, Golden Arrow, Grid Iron, Eye of the Tiger, Dragon, Rock Star, Blue Note) with spinning targets and looked up their pictures on Pinside and IPDB. By some odd coincidence, Ship Ahoy and Buccaneer had the best under playfield pics, 11 of the other 13 machines either had no under playfield pics, the switch assembly was obscured by other components or the resolution was too poor to make out. Golden Arrow and Surf Champ had their weights above the switch. Short of anyone else weighing in, I am at a dead end.

Another thought I had was to send a short questionnaire via PinsideMail to the 54 Ship Ahoy and 150 Buccaneer owners asking how theirs is configured and compile the results. I am new to Pinside and not yet sure of the etiquette. The Community Rules and PinsideMail rules do not prohibit a bulk messaging poll, but wanted to check first in case it is not an appropriate thing to do here. It does not look like PinsideMail can message owner groups, so assume I would need to send 203 messages. 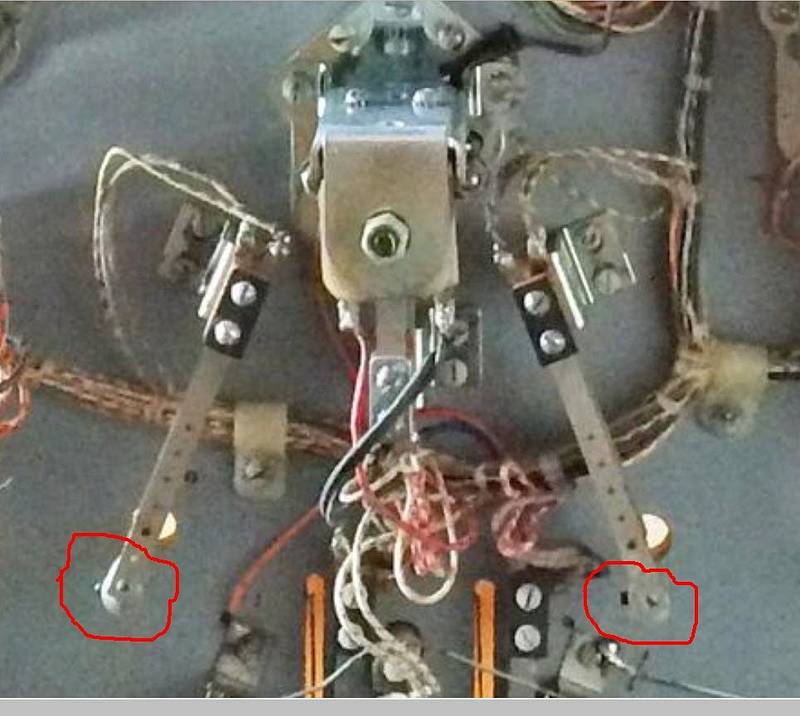 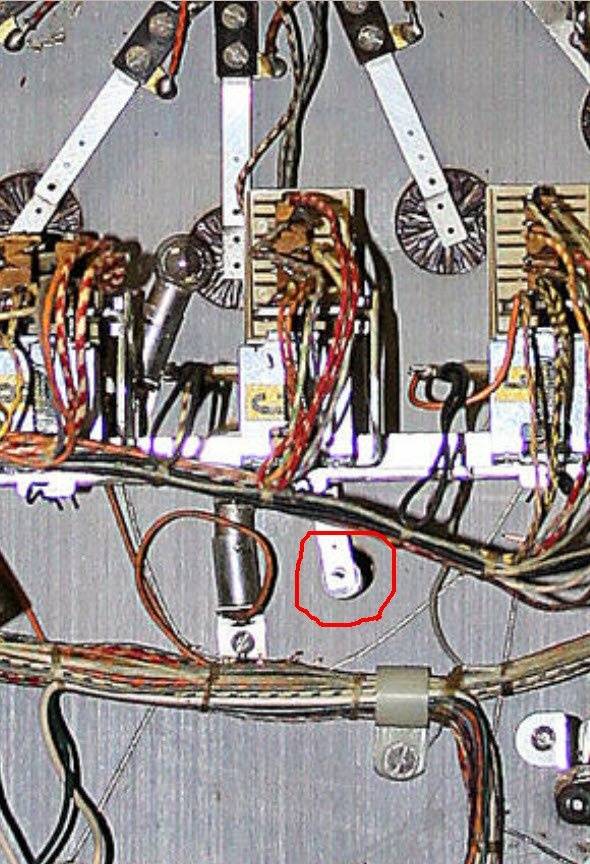