I've been working on fixing up a Gottlieb

Rock for a friend for the past month. The machine was in rough shape. When I got it, a bunch of fuses were blown, the outhole, 4 and 5 bank drop target solenoids were dead, and the knocker was stuck on, the game would lock up, etc.

I've worked through all those issues -- rebuilt a lot of the driver board and replaced Z30 on the control board.

Everything is working well now except for the 10,000 lamps - L47 and L51. During attract mode (and gameplay) these lights should alternate. I verified on a real game at Pinfest last week.

The behavior I'm seeing is strange. Sometimes when I turn on the game L47 will be on, other times L51 will be on. During attract mode, the light will look like it wants to alternate (ie, just a hint of dimming) but is on solid. Ocassionally during game play, (very rarely) the lamps will toggle.

Using a logic probe, here is what I'm seeing on Z12 during the lamp test:

I was all set to replace Z12 74175N, until I followed the test at: https://www.pinwiki.com/wiki/index.php?title=General#Testing_an_integrated_circuit

All the values are within the tolerances, and match Z11, etc.

Anyone ever see this issue before?

Using your meter on the output pins of the chip tests its output transistors. While this can identify faults with the chip, good readings don't tell you what's happening upstream within the chip.

Since both the 4Q and /4Q outputs are struggling to change, it says the predrive transistor circuit in the chip for flip-flop 4 is likely suspect.

In your shoes I would still replace the chip.

Since both the 4Q and /4Q outputs are struggling to change, it says the predrive transistor circuit in the chip for flip-flop 4 is likely suspect. In your shoes I would still replace the chip.

Thank you very much. I will give it a try!

Quench - Just wanted to give a quick update. USPS and Marco let me down, so it took way too long to get the chip. 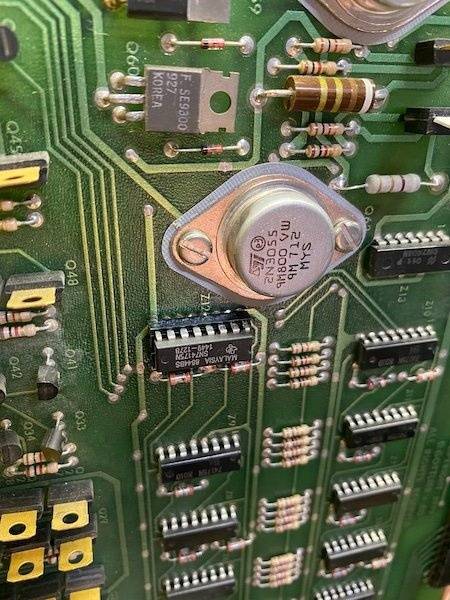 Great, and thanks for the update!