I purchased this in a package deal and was told by the owner it was built for a Gottlieb family member. I'm no EM guy and know nothing about them. After doing a bit of research I can only find these made as a woodgrail. This one is a regular cabinet with metal side rails and lock bar.
Does anyone know anything about this?
Thanks. 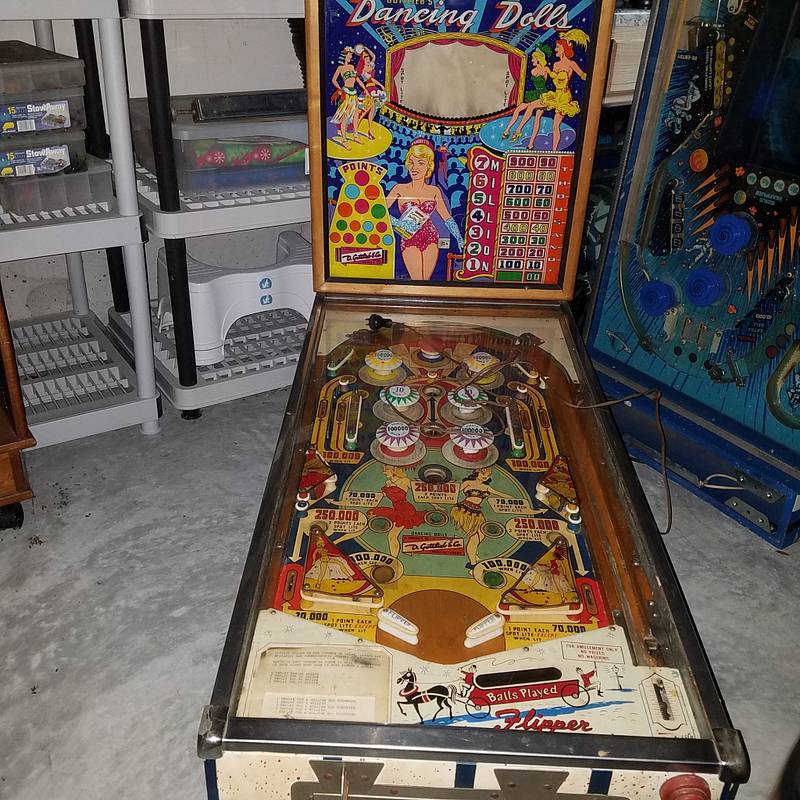 Can you show a picture of each entire side of the backbox and cabinet, and the full front, to show the artwork?

Look for a small serial number stamped into the cabinet front, or maybe elsewhere.

Where did the owner hear what he told you? How long had he owned this? How did it get from the Gottlieb family owner to him?

Does the cabinet and head artwork match? I have had a few machines where someone has switched the cabinet out.

There supposedly was a modified "Dancing Dolls" produced by Gottlieb (according to the ipdb). It was an experimental add-a-ball machine.
Oddly, your machine has starburst bumper caps on it which came out much later.
I've seen some woodrail games dropped into metal rail cabinets before, but if this is the real deal, you might have something there. 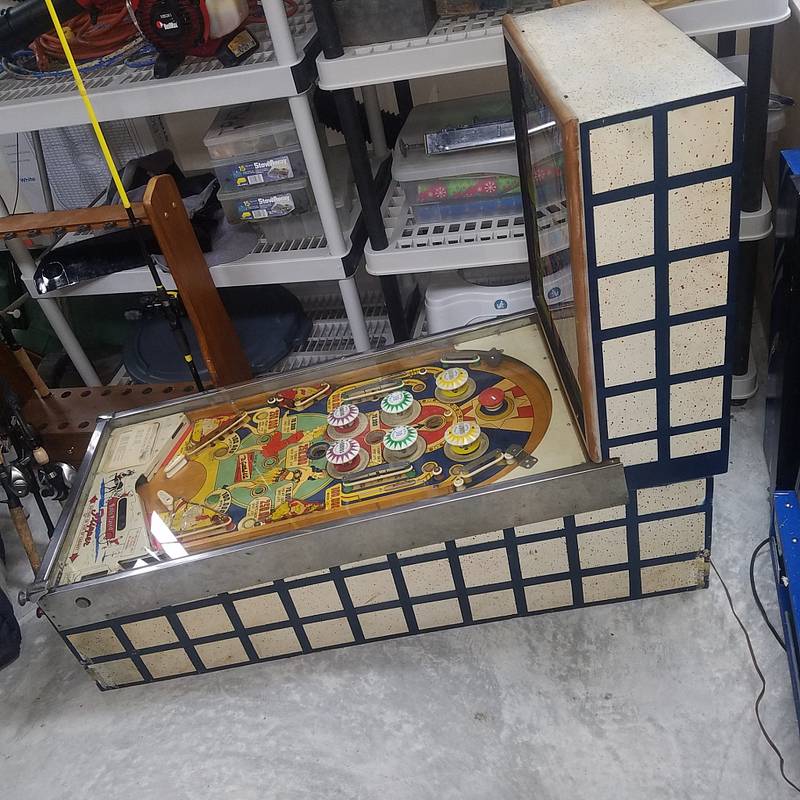 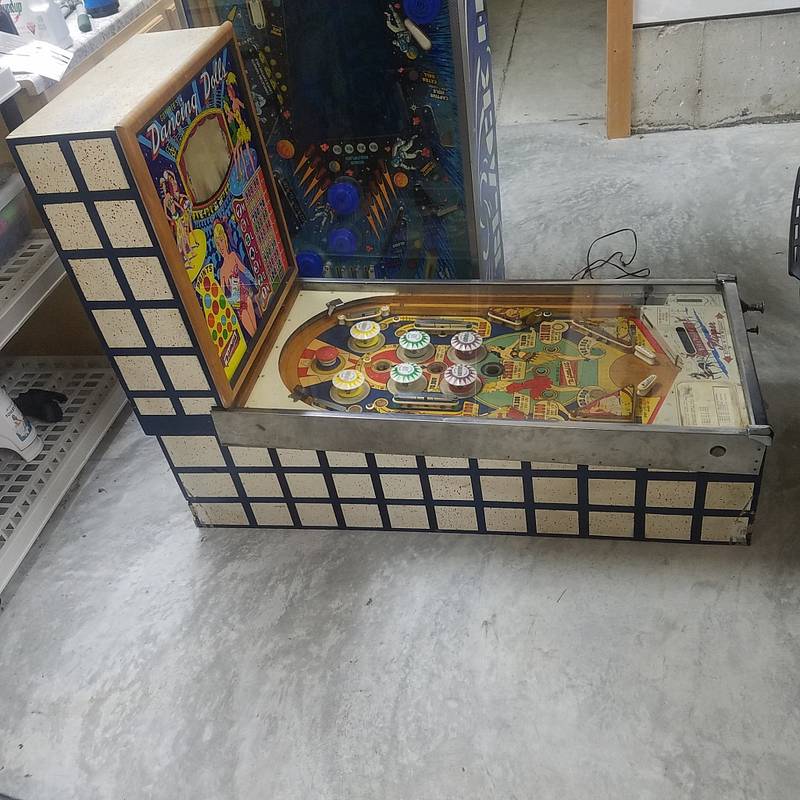 The pop caps look clean and white like they have been replaced.
The serial number on the front of cabinet is 29754 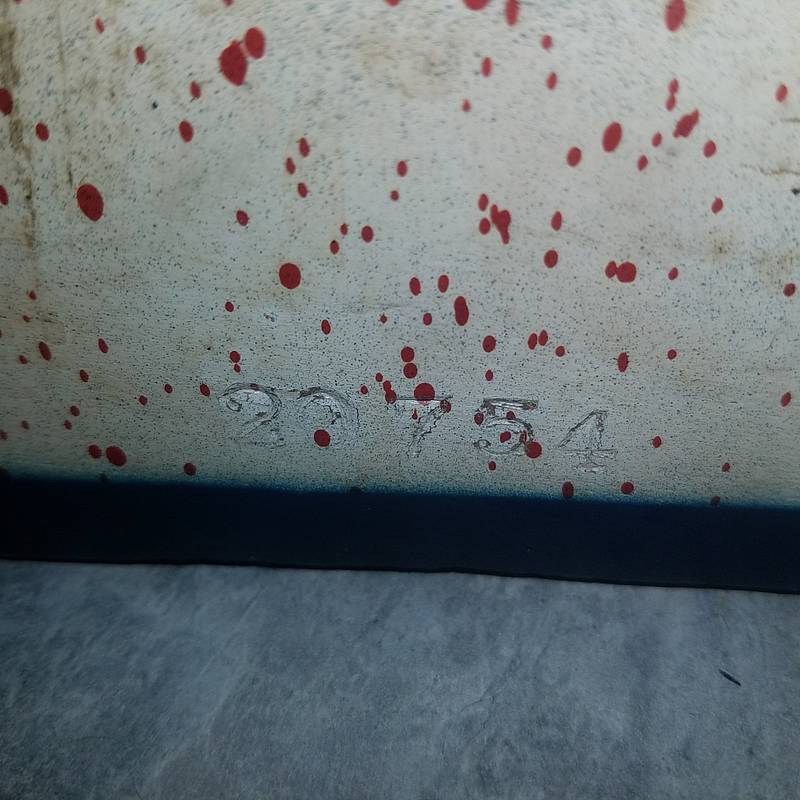 I dont know how long he owned it, I didn't ask.

I found some info about Gottlieb changing over from woodrail to metal during production of the pin. It also talks about some being made with different cabinet art.
It's all on IPDB 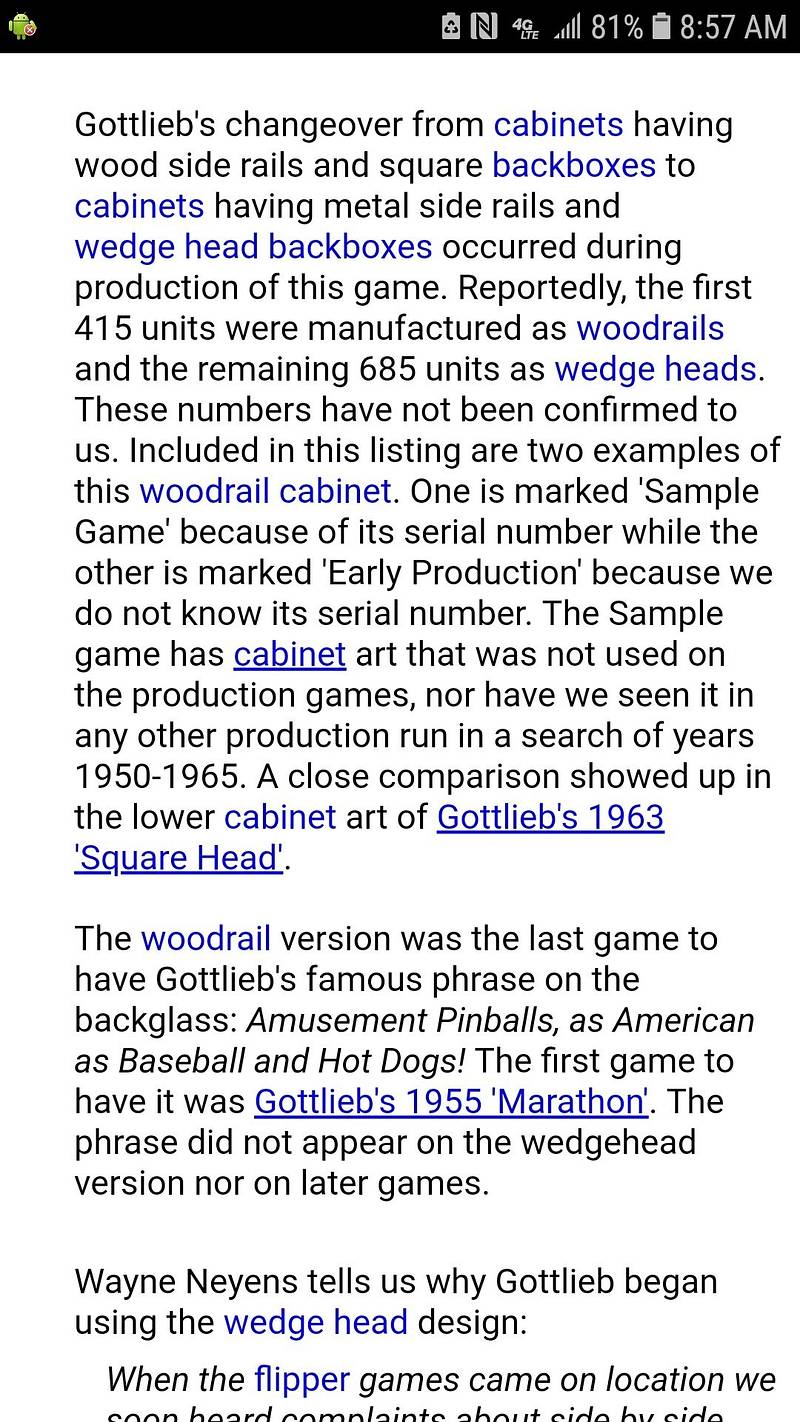 I believe the material you are quoting refers to "Flipper", and not "Dancing Dolls". "Flipper" was the first wedgehead, first production add-a-ball game, and the first Gottlieb metal rail game. I've seen several in their original woodrail cabinets, and the cabinet artwork is similar to "Square Head" as is stated in the article you're quoting.

It could also be that your lower cabinet is actually a woodrail cabinet that had an aftermarket metal rail kit installed. The way the woodrailed lightbox is installed suggests that the lower box is a modified woodrail cabinet.
I've seen these metal rails tacked onto some of the later woodrail titles. It was likely done by operators in an effort to "modernize" their older stock once the metal rails games started appearing.
The cabinet paint and serial number don't appear to be factory original, but obviously were done long ago.

Ok thanks I must have read it wrong.
Either way just looking to sell it if you and anyone you know wants it.
I'm not an EM guy.

Ok thanks I must have read it wrong.
Either way just looking to sell it if you and anyone you know wants it.
I'm not an EM guy.

Nonetheless, a great find. I wish I were closer. BTW, "Dancing Dolls" was the last Gottlieb game to use lamp display scoring. All EMs to follow used score reels.

The pop caps look clean and white like they have been replaced.

Probably another attempt to modernize the look of the game. This suggests that the game may have been operated into the mid sixties or later.

Thanks for all the great info jrpinball

I'll get it up for sale in the Marketplace

Elevatorman, are you gone now? Did I miss you by only a few minutes?

I searched for your serial number 29754 on the IPSND.net and the closest I found was 29755 for Gottlieb's 1960 Kewpie Doll which came out a few months after Dancing Doll:

So, I'd say you have a Kewpie Doll lower cabinet.

Here is a picture of the Kewpie Doll cabinet side, a woodrail:

Interestingly, the 1960 game Flipper, where production switched from wood rail to metal rail, was the next game to come out after Kewpie Doll.

Gee, in support of the former owner's story, if this was Gottlieb's experimentation for a new metal side rail, it fits that they'd do it on a game closely preceding Flipper. But, why wouldn't they just do it to an empty cabinet? Or, if they wanted to see how it would look in general, why not just use the fully equipped Kewpie Doll production game that would already be inside that 29754 cabinet? Why insert a Dancing Doll playfield (and backbox innards) into a Kewpie Doll cabinet? Three production games came out in the few months between Dancing Dolls and Kewpie Doll: Captain Kidd, Spot-A-Card, and Melody Lane. Why Dancing Dolls?

Well, maybe the Gottlieb executive who took this home to his kids preferred the game Dancing Dolls.

These are speculations. I'd like to hear the details from the former owner, but maybe that opportunity has passed?

The Gottlieb production metal rails curve around the flipper button. Your rails do not curve but have a straight edge at this end, and they each are nailed down at this end with three nails that, to my eye, do not have symmetry when you compare one side to the other. Is this operator's installation imperfection, or factory experimentation?

Can you post a picture of the full cabinet front? Also, do the inside walls of your backbox have any paper tags affixed to them, and what do these tags say, and how are they affixed?

Sorry I was away for a bit hosting a party.
I'll look into it soon and get pics.
Either way whatever it is I'm just looking to sell it anyway as it was just sitting in a garage collecting dust.

When did Gottlieb stop stamping the game title initials after the serial number? My '57 "Royal Flush" still had "RF" stamped at the end of it's serial number.

I basically paid 600 bucks for it with the package deal of stuff I bought. I had to buy all or nothing. I'll have to stand it on legs and see if it works.
Was that too steep?

I basically paid 600 bucks for it with the package deal of stuff I bought. I had to buy all or nothing. I'll have to stand it on legs and see if it works.
Was that too steep?