Baseball which was a complete mess, except surprisingly for the play field. Got it working, except for some scoring issues, then did all the cosmetic repair - refurbish. Down to two issues.

Run scoring: the first, second, and third base lock relays were seriously gunked up, and out of wack. Have them mostly working except for the occasional stubbornly sticking third base relay. And a semi random problem which I think is related to the base runner unit. Will eventually get the third base relay dialed in. But the other problem, I have no clue. I think there is either a serious problem in the run unit, or the discs are out of alignment. When the top roll over switches are triggered, it is supposed to score 50 points, and lock the appropriate base runner relay in the on base position. Depending on how the base runner unit discs are aligned, the lock relay either works fine - or as the 50 points are scoring on the reel, the unlock side of the relay pulses 5 times, resulting in the relay not locking in the base runner on position. Have tried realigning the discs with no success so far. Also, and I think related to this problem, base runner positions are not correct a fair amount of the time, and triggering a double, triple, or home run does not score runs for the runners ahead of the "new" runner. ie: A home run with bases loaded scores 1 run, and not even that sometimes. Pics of the unit attached.

Notes: Have schematic, and all other original game paperwork as far as I can tell. Nothing gives real insight into how the run unit is supposed to function.

Hundreds / Thousands scoring issue: When the game is supposed to score 100 points, sometimes it scores 1000 instead. The 1000 point relay doesn't engage, the 1000 point reel just fires when the 100 point is supposed to fire. This is most common when the pop bumpers are lit for 100 points and very oddly are directly triggered by a ball. When I trigger the pop's by touching the skirt with a finger, scores fine. When a ball triggers it, sometimes scores 100 and sometimes 1000. My guess is there is a switch just slightly out of alignment in the 100 point reel. Or it has something to do with the ball triggering the point contact for a shorter time than when I use a finger. Have tried adjusting the switches below the pop, and in the pop relay, and in the 100 point reel, with no affect. And btw, no surprise to anyone here, these decagon reels are a pita.

Thanks in advance for any help. 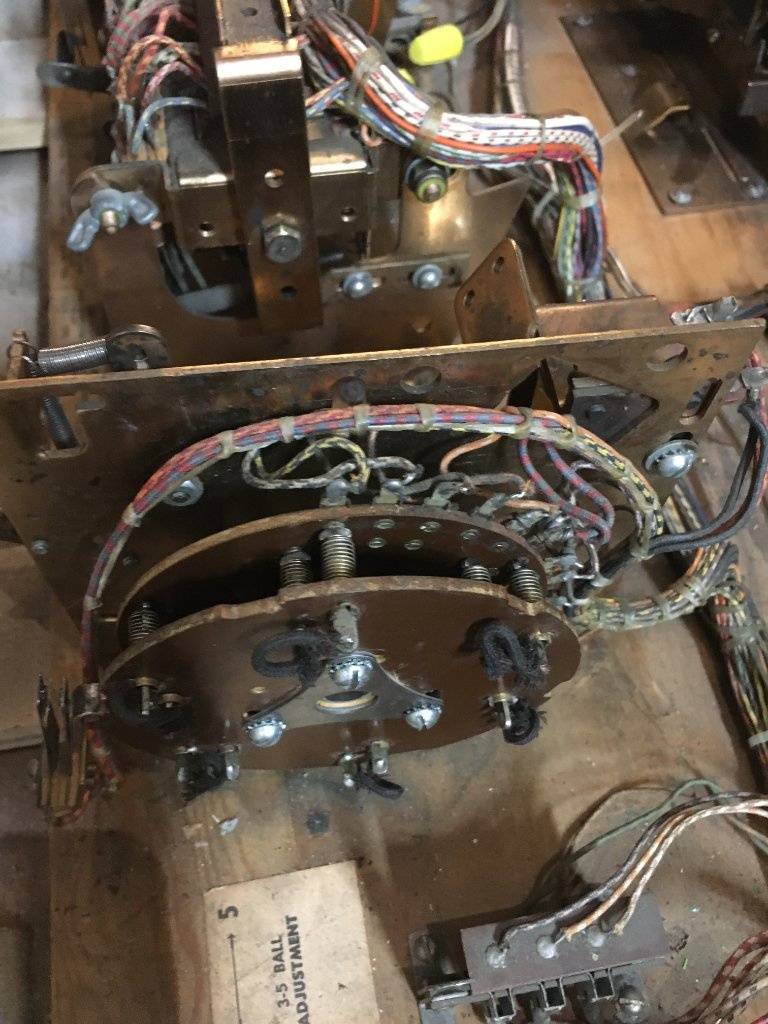 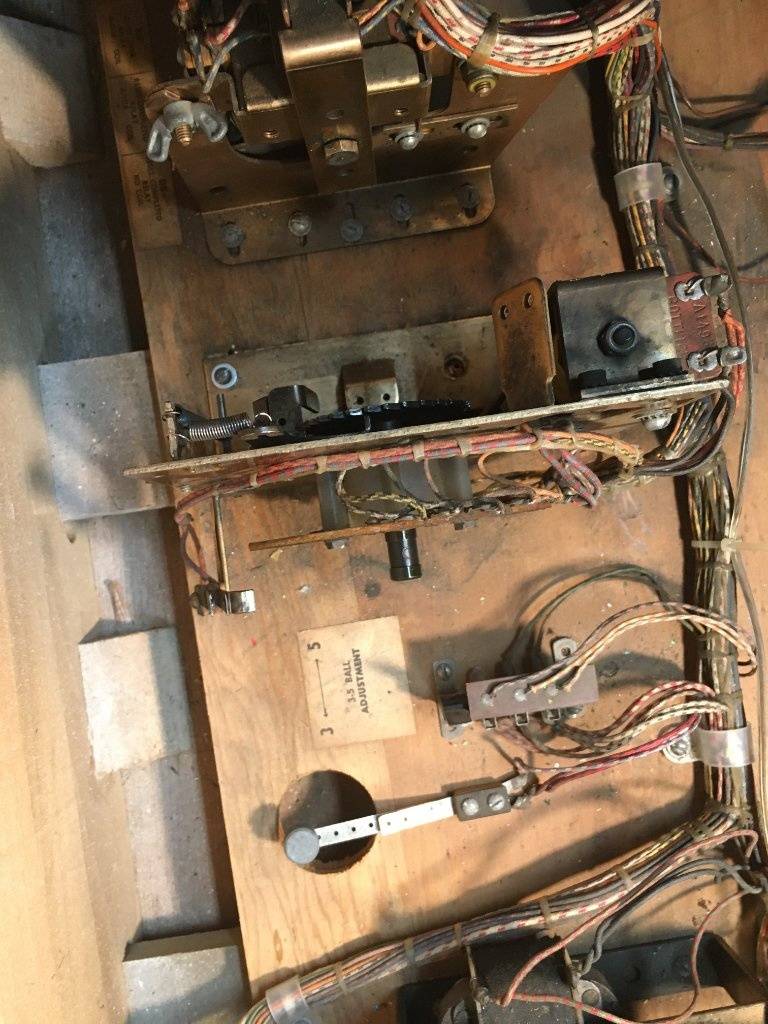 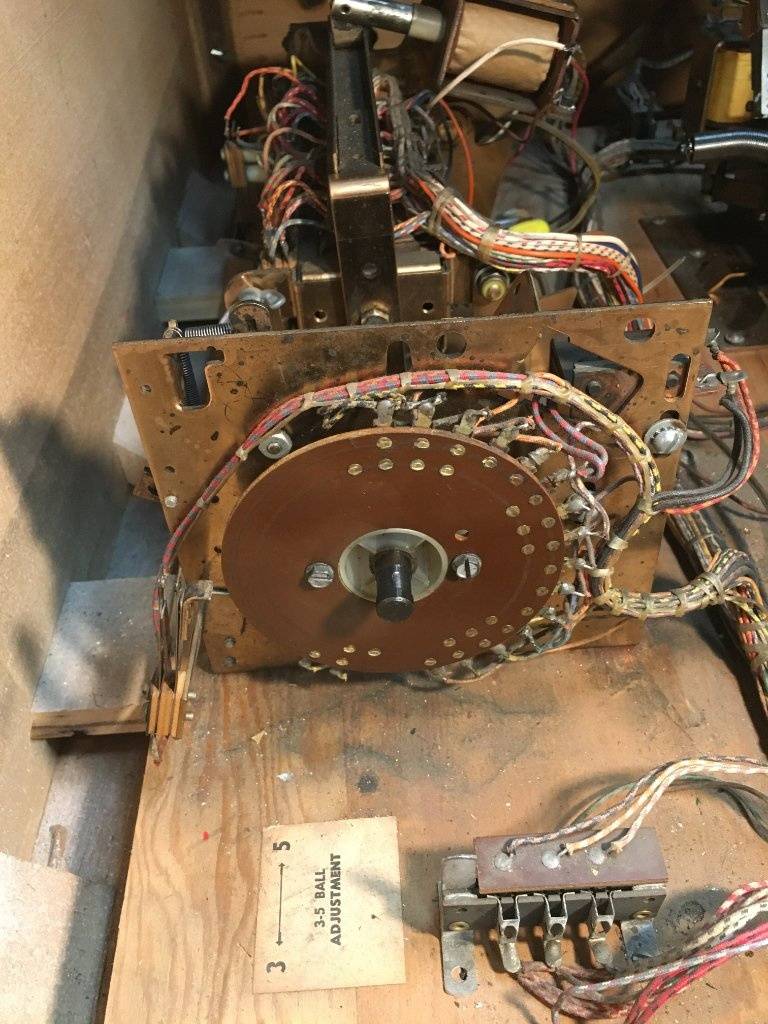 Update: suspected some of the scoring problem was too short or weak an electrical impulse to the 100 pt relay or score reel. High tapped the machine and problem resolved. Of course this didn’t solve the actual problem. But should I really care?

Bumping this: second issue solved. Really stuck on run scoring problem and could use a little or maybe a lot of Pinside help.

High tapping may be compensating for a poor connection in the 100 point scoring circuit or mechanical binding or friction. It might fix the problem but might also be driving the game harder than it needs to be.

The run scoring circuitry is fairly elaborate with a lot of moving parts. This explanation is based on the Play Ball schematic which may differ slightly from yours.

There are three interlock relays (A, B & C) that keep track of where the base runners are. There are also four relays for the four different hits (E/Single, D/Double, T/Triple, H/Home Run). When you get a hit the corresponding relay for that hit, and all of the lower hits all fire together. So a Double for example will fire both the D/Double and E/Single relays.

The first four positions of the Hit Unit stepper correspond to the four bases. To figure out the number of runs to be awarded for a hit the bases have to be evaluated one at a time and in reverse order to get the right answer. So the first position (before the first step is taken) evaluates any runs scored from third base. If there's a man on third base (C relay) and the hit is a Single or anything higher, one run scores. Then the Hit Unit takes a step and looks at 2nd base. There if there's a man on second (B relay) and the hit is a double or anything higher another run scores. The next two steps check 1st base, and then Home Run. Any time a run scores the Hit Unit completes the circuit to the F/Run relay which fires the Runs score reels.

The Man on 1st (A), 2nd (B) and 3rd (C) interlock relays have to go through a similar computation to figure out whether or not there is a base runner on base after a hit. To further complicate things the A, B and C relays are hard to get adjusted properly once out of alignment and are subject to becoming magnetized and misbehaving even if the circuit is working properly.

Sorting through this will take some time so be prepared to walk away and take multiple runs at it.

Thank you thank you thank you. This exactly the explanation I was looking for and need, as while over the 4 years I have been working on pins, my schematic reading skills have improved, trying to figure out the set of electrical paths you describe from the schematic, was seriously hurting my brain.

Performed a number of tests so far, and yes the score motor always runs. And the A, B, and C, latching relays are almost as fun to get right as the score reels. But have two of three performing reliably, and think I am narrowing in on getting third base relay working well soon.

Now with your info, can run the tests you recommend. Already know that none of the runs score reliably. The closest is 4 singles will score a run, but continued singles will score either 1 run, multiple runs (up to 3), or no runs. Home runs, will almost always score 1 run, regardless of how many runners on base. Now just have to go through the tests again in a more orderly fashion.

Based on your info, I am thinking maybe the problems are more in the single, double, triple, and home run relays. Rather than the hits unit or the A,B,C relays. Will see. Thank you again.

I'd recommend starting with experiments that use just a single base runner to reduce the number of variables. If you only get 2 runs for a grand slam for example you don't really know which two runners worked and which two didn't.

Something else you can try to better understand things is to disconnect the Score Motor at the service jack and then manually turn it after getting a 'hit' so you can watch the relays and steppers at a slower speed. Just be sure to always turn it 1/3 of a turn and return it to an index position. If you leave the Score Motor between index positions you'll never be able to sort out what did or didn't happen.

Thank you for help and suggestions. Key was that the hit unit was not always advancing 5 steps. Sometimes 1, or 2, or none. After chasing down the switches from start motor on, the last switch I checked, the hit unit switch (I forget the name of it, its late) that follows the disc and opens when it falls into a trough in the disc. It looked solidly closed, but was just making contact so as it rode the edge of the disc, it would lose connection randomly.

Then of course, the first and second base lock relays had issues and needed careful adjusting, testing, and readjusting (what a pita), and then the 100 point pop light switch on the second base relay stopped making contact after adjusting to get the runner working. But finally, all done. Played 6 games and worked flawlessly.

Not sure what part of the country you are in, but if ever in Sacramento CA or at Golden State Pin Fest. I owe you a beer or the beverage of your choice. 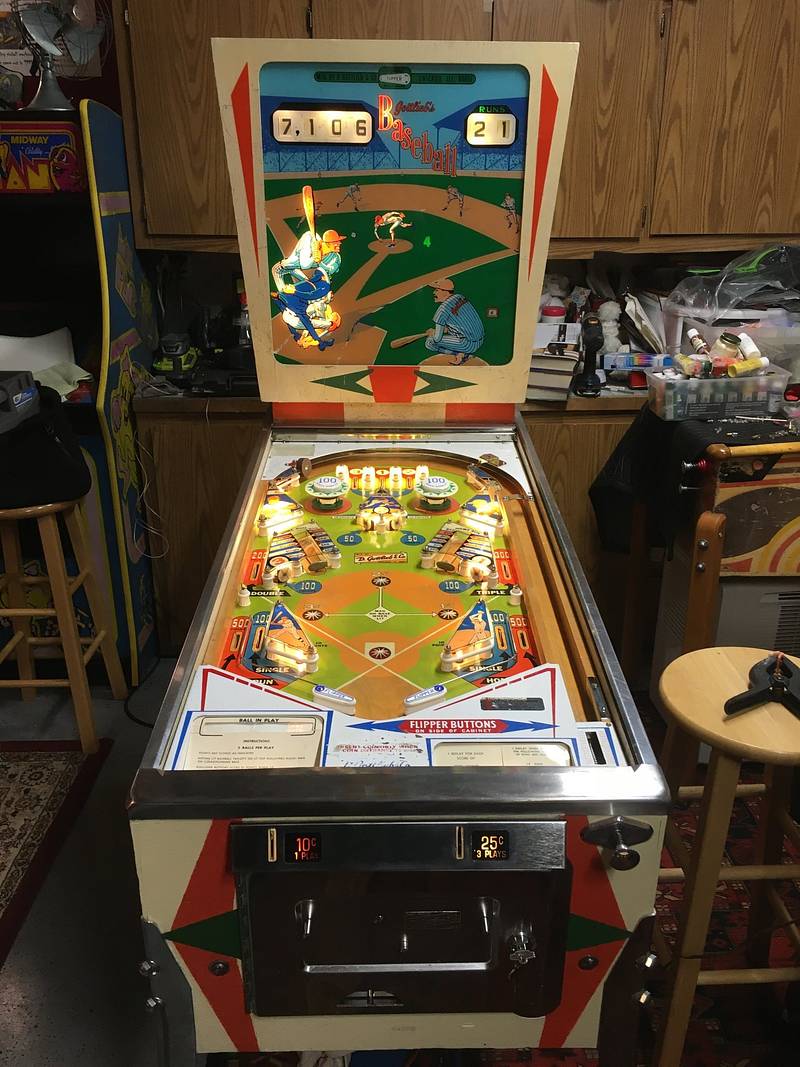 Any chance you bought that game from the Pacific Pinball Museum? If so, that’s my game! I owned it before they got it from me.

Any chance you bought that game from the Pacific Pinball Museum? If so, that’s my game! I owned it before they got it from me.

Thanks for asking, but no. I bought it in Sacramento from a man probably in his 30's who's dad had bought it for him as a teen. It also had a big hole, almost the size of the coin box in the bottom of the cabinet about where the coin box would sit.

Enjoyed this thread. I played Baseball a LOT in a ZAYRE department store in my home town of Alexandria VA.. l remember enjoying the game quite a bit. It doesn't get much love from a lot of EM folks, but I like it!

I'm glad you got it sorted out. The run scoring calculations are pretty elaborate and interesting. I find that the game can often do the math faster than I can.

I'd like to get to GSPF. I'm curious, do you think there would be any interest in an EM repair class at or near the show?

Thanks for asking, but no. I bought it in Sacramento from a man probably in his 30's who's dad had bought it for him as a teen. It also had a big hole, almost the size of the coin box in the bottom of the cabinet about where the coin box would sit.

Ah! No, wasn’t mine then - glad you got it sorted and fixed up!

I'm glad you got it sorted out. The run scoring calculations are pretty elaborate and interesting. I find that the game can often do the math faster than I can.
I'd like to get to GSPF. I'm curious, do you think there would be any interest in an EM repair class at or near the show?

If you do come out for it, please PM me ahead of time. And I for one would be interested in a class if can fit it into my schedule. Have some personal situations that might make it difficult this year to be there the entire weekend.

Enjoyed this thread. I played Baseball a LOT in a ZAYRE department store in my home town of Alexandria VA.. l remember enjoying the game quite a bit. It doesn't get much love from a lot of EM folks, but I like it!

Thanks. I played it as a kid at my local roller rink. Not sure if it is a keeper though, it is a bit of a love hate relationship with me. But always glad when I can bring a classic old game back from the dead, and this one was very close other than the play field.