I FINALLY DID IT!!!!!!!!!!!!!! Though I have some comments/questions. Read on.
First, let me back up.
My family has fallen in love with AIQ and so we're going to get one ... which in a way breaks my heart because we have to sell our GoT Pro. (Our first NIB!) In preparing for this transition, my son and I have been playing GoT frequently to try to set some high scores and hit some personal goals. My goal, of course, was to claim the Iron Throne. I've reached IT mode several times (lost count but probably between 5-10) but never made it through all the castles.
I'd never looked up any info or watched any tutorials, knowing I'd eventually get there on my own and wanting to experience it myself for the first time. (If you're like me in that way, and haven't looked it up either, then STOP READING NOW because I'm going to spoil it.)
Well tonight, I FINALLY DID IT and ... to be honest, it was REALLY disappointing. Let me explain.
I was playing as Targaryen (see my previous posts about the difficulty of reaching Iron Throne on a Pro -- I've only ever beaten Drogon ONCE on my Pro). I was on fire (pun intended), and had picked up two extra balls during ball 1. By the first extra ball, I'd reached Iron Throne mode and kept crushing it, claiming four of the castles. On the second extra ball, I got through one more, leaving two castles to go. After a much-needed breather, my son played his first ball, then I stepped up again for ball 2. Beat the sixth castle, and our excitement was through the roof! Ball 2 was still alive, and I then methodically worked my way through the seventh castle -- and claimed it! Didn't know what to expect, but things kept going, so I looked up and saw now we were trying to take The Twins.
Ok, I'll keep going ... got em. Next up was Qarth. Hit one or two shots for it, but drained one of the two balls on the table -- so back down to one ball, Iron Throne mode is over, back to normal play. Our excitement -- at its absolute peak, hearts racing -- turned to shock and blank stares.
That was it.
No fanfare or celebratory music.
No special dialogue or congratulations.
Nothing. It was just another mode that ended.
Adding further insult to our disappointment, the Iron Throne insert on the playfield didn't even stay lit (like Hand of the King does). It was clear I had won, as all the house lights had gone out and I was obviously 'starting over'. After ball 2 ended (beat a house or two), I pulled up a rulesheet summary to confirm it, and sure enough it mentions the 'victory laps' after taking all seven castles, and 'resetting' things after you're back down to one ball.
I went through the motions of playing ball 3, trying to rack up some more points -- it still wasn't my HSTD, believe it or not -- and didn't do much on ball 3. I may have lost my groove or concentration due to my disappointment.
I've had this game for three years and I FINALLY beat it, and the game did absolutely nothing memorable to celebrate it.
Granted, it was a wonderful experience with my son, and we still shared many a celebratory high-five and I'll definitely cherish that forever. But still.
** If there are any game coders reading along here in this thread, please keep this in mind for future games. If a player goes through all that to scratch and claw and climb their way through all those modes, there should be SOMETHING to reward you at the end before it 'starts over'. **
For GoT, for example, here's an idea of how it could have been done: you've beaten all seven castles, now you're in victory laps. Once you're back down to one ball, instead of just abruptly ending IT mode and starting over, it should light the center ramp (like when HotK or IT are lit) for one final shot -- you put it up there one last time, the lock holds it, and it plays a special celebratory animation / song / dialogue / etc., allowing you to savor your victory & conquest. When the celebration ends, it releases the ball, and THEN you start over.
Don't get me wrong, I still love this game and I'm still sad to sell it, but that lack of victorious 'ending' really stung.
FWIW, here were my scores during Iron Throne and overall. As I mentioned above, this was still only my second highest score to date; my GC score is 9,633,839,410 ... it was a game during which I had major PF multipliers and was absolutely crushing Wall Multiball, with MANY cycles of jackpots and super jackpots.
<sigh>
[quoted image][quoted image]

I totally agree, maybe Dwight can add something that gives it a more wow effect for beating it.

So GOT sounds good with an external woofer? Never thought to add one to it.

Thanks,
I ordered a flipper fidelity set, it’s easier to get here in Germany.
I already turn down insert and flasher brightness to 100, it’s still intense when playing in dark. Thought gb was exhausting for my eyes, but this one tops it.

Ok will try. Thank you

Is there a protector available for the castle plastic. I heard that it can break easily

Ok will try. Thank you
Is there a protector available for the castle plastic. I heard that it can break easily

Mine hasn’t broke in like 5-6k plays. Not sure if there’s a protector or not.

Mine hasn’t broke in like 5-6k plays. Not sure if there’s a protector or not.

The front side of the castle on mine and every one i have seen has impacts.
On mine i covered it with stickers because of the price of a new plastic. You can only buy the whole set....
I marked the impacts in the picture. 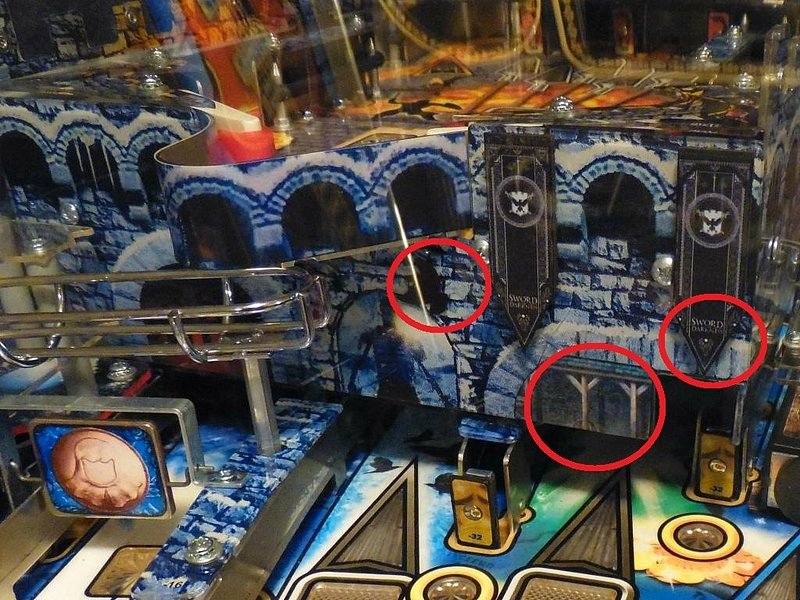 Got the fidelity speakers today. What a difference, sound really good now.

Is it normal that the gi flicker when pressing the flipper button ?

Yeah, that's because Stern decided to have the GI driver on the 8 coil node board use the same (supervised) ground as the coils do. If you are willing to solder on the node board, you can bridge coil ground and logic ground to fix the GI flickering, but by doing that you would loose the current sensing on the coils too. Which imho is much more important..

Yeah, that's because Stern decided to have the GI driver on the 8 coil node board use the same (supervised) ground as the coils do. If you are willing to solder on the node board, you can bridge coil ground and logic ground to fix the GI flickering, but by doing that you would loose the current sensing on the coils too. Which imho is much more important..

Ok good to know that it’s normal. Is
There somewhere a how to do it for this ?

my got didnt keep the sound level. Everytime i boot up the game, i have to adjust it again. Is that normal on spike 1? or is it maybe the lithium battery ?

Ok, i just ordered a new battery. Hope that fix it

Battery wasn’t the problem, I had a bad sd card. I installed a new one and now everything’s fine again

I just found an adjustment that make playing in the dark more joyable and didn’t need to turn down gi and flasher brightness.

This game is so great, really like the way you can choice the strategy. Cant believe that I didn’t spend attention to it all the years. 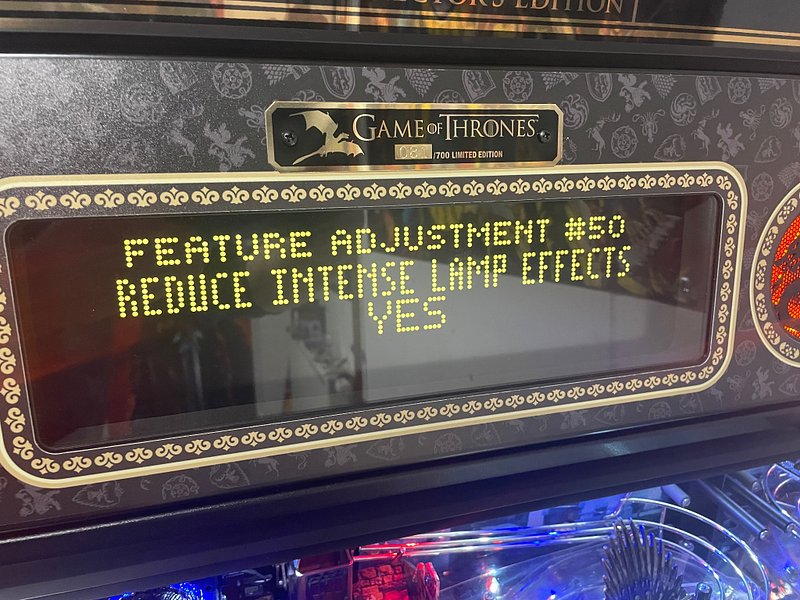 Great game that will always be underrated!!!

Great game that will always be underrated!!!

Agreed, but that's exactly what I love about it. The playfield stays out of the way (especially on Pro, which I prefer) and lets the rules do the heavy lifting. No fancy mechs or elaborate toys or complicated ball paths: just a handful of shots that you need to practice, and a deep ruleset with tons of strategy to keep it interesting.

I was surprised how fast and how nice the shoots are. Also the miniplayfield is well integrated. I can’t stop playing it.

This page was printed from https://pinside.com/pinball/forum/topic/got-kicks-ass/page/142 and we tried optimising it for printing. Some page elements may have been deliberately hidden.