I've been told August or September. So bored of waiting I've bought other games inbetween.

me too, just bought a MET premium to hold me over. dammit. LOL

You guy are going to love your premiums,I have owned about every dmd game ever made and around 15 to 20 nib sterns and gble/ premium is so dam much fun,I have been playing the pro at mbrew and marvins for months and have spent a ton of money so I know the pro quite well,but the premium/le is so much better,the right ramp is super smooth and very fun,the ecto goggles are just way cool to see in action,I wish there were better rules for it and the magna slings are better than you can imagine and with a little adjusting they are plenty sensitive and so cool,do I have to say how much fun the subway ball lock ramp is, along with art and sound package and the moving slimmer with the new switch that works, I will say this is sterns most fun game and one of the most fun game I have ever played by any manufacture,

Hang in there,your games will ship and then you will have nothing to look forward to

Hang in there,your games will ship and then you will have nothing to look forward to

Patiently waiting for my GB LE and then I'll be looking forward to Alien LE.

"end of july" is the best I heard. I'm expecting September

When we were staring at speculation threads in November / December '15, had someone told me it would be Fall '2016 before the premium of this title landed with customers, I would have bet you nearly anything that you were dead-wrong. In fact, I would have thought GB would have been 'old hat' by now and the mob staring unblinkingly waiting on the next title. Yet, here we are. GB Hype is still Hype, not all of the 500 LE's have been shipped, last factory tour showed Star Treks, Metallica, a few other titles but no GB Premium or 2nd Wave GB Pro.

It seems like 3 weeks from Line to Truck is a fair estimate.
Last estimate I've gotten is "August", which I've been conditioned at this point to think means August 31st, rather than August 1st. (Hopefully sooner!)

I hope Stern is able to get whatever the (supply? quality?) issues are worked out and get that big-ass factory humming, soon.
At least we have a few other games to keep us busy while we wait...

Even September would be fine with me if it meant the insert issues are resolved. I want it right more than I want it fast.

Paid in full over a month ago, no word yet.

GB LE back on the line this week after parts shortages (I'm assuming playfields), so at least two weeks of that before they get to Premiums, assuming they don't run into more bad playfields again. So probably the end of August for Premiums to start rolling out, at the earliest.

As Stern are refusing to acknowledge the playfield issues with the LE, how many people have or are considering cancelling their premium orders?

There's been no guarantee given that these machines wont be from the same batch!

I cancelled, not worth the risk.

Considering as well, hoping I don't have to.

I cancelled my LE.

I just read the Ghosting thread and I am not touching NIB until they fix their issues.

I was ready to pay extra for an LE to get something special, not something flawed. I ordered a Full Throttle LE from Melissa at CoinTaker instead.

As Stern are refusing to acknowledge the playfield issues with the LE, how many people have or are considering cancelling their premium orders?
I'm getting close....
There's been no guarantee given that these machines wont be from the same batch!

I don't see how Stern can guarantee or even address anything publicly on this ongoing issue now. I think it will take a long time before they even understand what the root problem is (insert material change? clearcoat change? process change? cure time change? who knows?).

Essentially, if you're buying a GB LE you should be comfortable with the idea of swapping the playfield yourself since when you get the ghosting, you're not getting a populated exchange. Based on what's gone down so far, at best you get a playfield to swap yourself, which is kind of sad for an $8500 machine. I was ticked when I had to do one for a new ~$3500 simpsons back in the day.

Yea "TOLD" but I'll be golfing too

Where's Vid? Got to be a way to fix ghosting inserts.

I'm definitely interested, but will wait until these issues have been sorted out. Currently, I'm looking at modern games made prior to this change of manufacturing. The way I see it, there is plenty of time to pick up a nice GB premium in the future.

I informed my distributor today that I wanted to cancel or delay until the ghosting was resolved. Enough orders get canceled and dimple gate will have to get a better response.

Today I asked my distributor not to fill my premium order until I say so. I'm just watching for reports of ghosting hopefully to taper off but no luck so far.

It's sad because this is such an awesome game. I'd really like to know what's actually happened and what the solution is or will be.

What is the change in manufacturing you guys are referring too?

There was a supposed "pause" in LE manufacturing in the later half of July, and that the LE's are being made again this week.

I'm very curious to see if LE's made in August have the ghosting issue or not. That's going to determine whether or not I cancel my Premium order. I'm going to take it right up to the edge before canceling, because I want this so bad.

Bump Air-Pinball,me as well! Also,i kinda hated it when MrBellman sold his LE cause the LEDs blinded him!!

Bump Air-Pinball,me as well! Also,i kinda hated it when MrBellman sold his LE cause the LEDs blinded him!!

I'd sell an LE too, because that green is God-awful ugly! Thank God the Premium is so nice!

I informed my distributor today that I wanted to cancel or delay until the ghosting was resolved. Enough orders get canceled and dimple gate will have to get a better response.

I have a premium on order. Nothing in my previous purchases with Stern leads me believe they won't make it right for those that have already shipped and fix it for those that haven't. Can't wait to get my game and Stern has my confidence on this one.

Stern has my confidence on this one.

That's funny, because your avatar looks scared - like it can barely stand to look.

I know I am so disappointed but crack kills.

I like your confidence, Visi0n. I also have a Premium on order. I'm going to stay excited about its arrival. If the inserts ghost I'll ask Stern for help and take it from there. Hopefully they have a new approach to the current playfields and a solid solution for those that are experiencing issues with their current pin.

I also have on order. I'm a little more bummin about it. I'm still sticking at this point but..... I'm thinking things through. I admit I did look at the sale ads for another pinball.

For now, I am keeping my order. However I will postpone if Stern does not respond to this issue in a positive way, i.e., playfield swaps for affected machines. The size of this problem dictates they announce something soon or they will lose customers, at least this one.

Looks like the captive ball guide has been fixed on newer LE's. This bodes well for other tweaks on our Premiums. 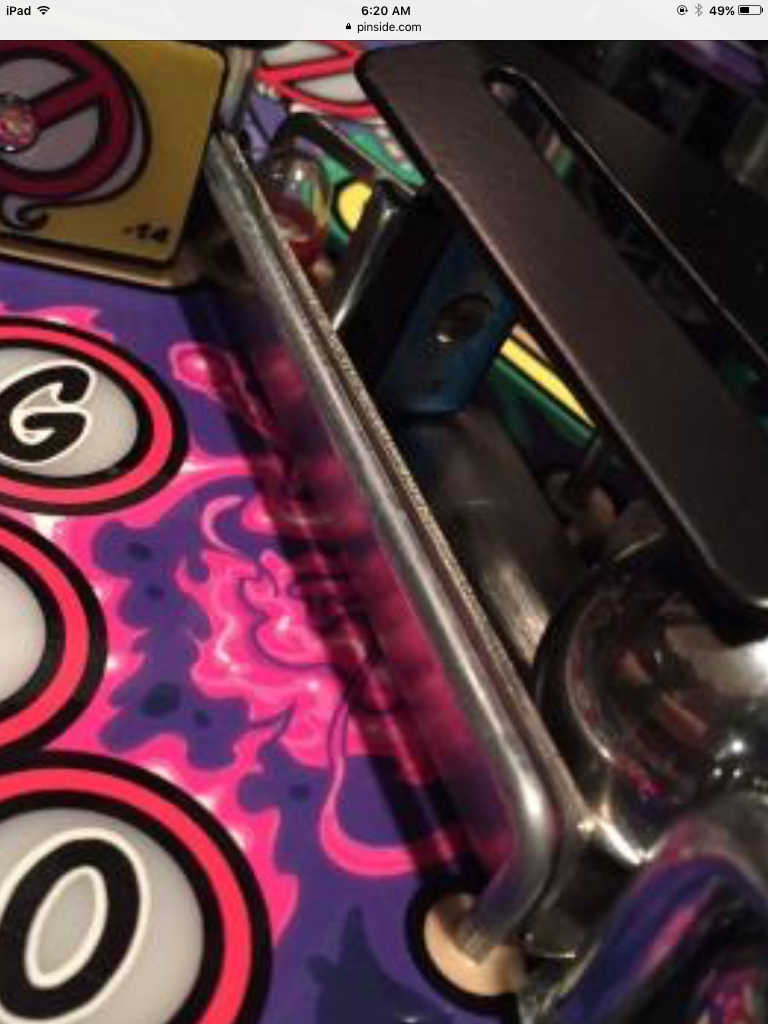 I have a good feeling that the premiums will be fine. I'm sticking with mine.

From another thread.....update from Gary Stern.

I'm hearing September now for my Premium.
Distributor was intentionally vague about when in September, So I penciled down Sept 32nd at 24:05:00.

I guess I'm sticking with my order also. There are other pins I want and I have almost pulled my order 3-4 times.

I have a good feeling that the premiums will be fine. I'm sticking with mine.

The premium at Logan arcade has ghosting, so no.

The premium at Logan arcade has ghosting, so no.

That was probably made in July or earlier. There was a test one at Rock Mountain over a month ago.

Those aren't indicative of the August run coming up.

That was probably made in July or earlier. There was a test one at Rock Mountain over a month ago.
Those aren't indicative of the August run coming up.

Keep telling yourself that.

Msch - I think you're trying to be helpful by alerting us of the potential but your last comment was a little much. Appreciate the input but if you're going to debbie down this entire thread, don't waste your time. We get your point.

Keep telling yourself that.

Nothing to tell myself.

So, unless you have pics of this "ghosting" Premium, and pics of it's manufacture date and playfield date being in August.......zip it.

UPDATE: just heard from my Dealer,(Gameroomguys),they are still in production of the LE's,and our premiums won't be out till mid September!