You're currently viewing posts by Pinsider Raaalph.
Click here to go back to viewing the entire thread.

it's far from a real company, just a dude in his spare time building boards but sadly has no bussiness sense
Loves the taking money part, but utterly useless at actually sending out a product.

I think you’re on the wrong track. The picture on fb shows a completely different situation.
That amount of devices is far from hobby. I even doubt I have seen this amount anywhere else. 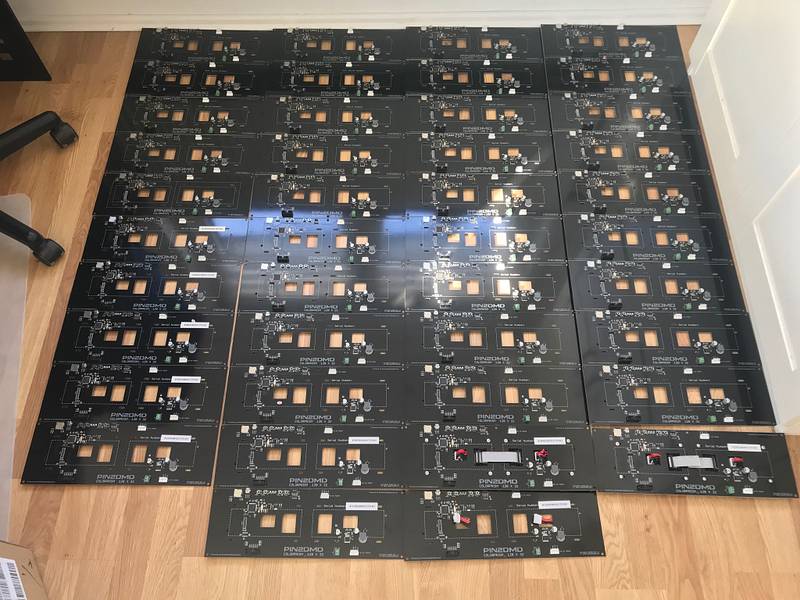 I dont have facebook, can you maybe ask him when he ships these new dmds?

Within a very few days and some are already shipped as stated there.

You still don’t get it.

You’d better concentrate on your own stuff instead of telling people such stories.

I think you only fear your competition and want to distract people from your own well known problems and your imposibility to finish even one single product.
Let us see if GGS will come up faster with their holomod than you.
I heard some rumors that after finsihing open orders it will be the next project.

Jeez seriously its not hard to make 70 of those things in fact its very easy! They don't even write the firmware ffs and just copy pin2dmd hardware. Basically order parts and assemble / test / ship. Its really not that hard!

Considering pin2dmds you might be right. But the shop offers much more than pin2dmds and it’s almost all handmade stuff.

&nbsp;
It will be interesting, here you have a link to the official German forum, the lair of this gang of criminals. There you have tons of claims, from people who have also been scammed, you can see that the story is always the same, even to give fake DHL tracking numbers.
https://www.flippermarkt.de/community/forum/threads/german-gaming-supplies.212115/
https://www.flippermarkt.de/community/forum/threads/german-gaming-supplies-keine-antwort-auf-mails-pm.190017/
&nbsp;
If you search more online, you will find the same type of complaints in other forums, including in another of their official forums:
http://vpuniverse.com/forums/topic/3574-an-order-to-german-gaming-supplies/?tab=comments#comment-39260
&nbsp;
What I can assure you is that the THREE Germans are involved:
1.- The band boss, the one who copies, plagiarizes, STEALS SOURCE CODE and hacks competitors' hardware.
2.- The one who SCAMS people by keeping their money and sending nothing,
3.- And the one who paints games to attract victims.
&nbsp;
PS: steve45 has nothing to do with this gang of criminals. He always seemed like a good person, although he shouldn't have the friendships he has, because he lends himself to being related to criminal activities as well.

You’re wasting so much time searching for evidence and content and shady practices and other bullshit... wouldn’t it be more effective to concentrate on programming and finishing your own products?

Do you have any proof for these accusations ? As far as I remember I only reported my own experience with him.
What I really don´t like is people bashing others just for the fun of it, without beeing directly affected, which I think is what you did and do again. Maybe that is what you misinterpreted as defending him.

stop defending yourself, there's no reason and if there was they woulnd't understand or want to hear it.

i find it embarrassing that the loudest monkeys are those personally not involved.

but lets see the other side... aren't those guys the ones being directly hit by sales and the pin2dmd project?
isn't pinballsp the one who ripped everything off he could get in his hands?
rgb.dmd
propietary rgb dmd panel solution by run-dmd clock creators (have a look at his early fb postings)
pin2dmd when it was opensource and replacing it with his own brand

isn't it even more a evidence of greed and envy to promise and promote a product within a few weeks without any particular knowledge how the product will actually work? how does it come there's no single evidence of the holo mod in working or at least in testing state?
didn't he ship 2 units to friends?
let's ask orlando from str pinball if he ever received a unit and how progress is?
wasn't he promoting himself as the big guy just laughing at the kids playing business?
wouldn't it be interesting to check his alter ego planeta9999 searching various forums for developers for both holo-mod and his, oh so mighty, dmdmk66 which lacks some essential hardware features according to lucky1?

wouldn't YOU not feel more ripped off by a fast shipping product that will at the end off the day NEVER EVER see the promised state of development and support?
this has been not only been the case once (dmdmk66) or twice( holo-mod)but at least 3 times!
check his fb page for other of his own "developments" and google them

I have seen such behavior only once at GGS, which was later publicly acknowledged and apologetically commented.

anyways, the more often you keep this thread on top, post in this derogatory manner, full of greed and envy
the more sympathy, traffic and, in the end SALES, you'll generate.

Mate, get a doctor... maybe a very good one... whats wrong with you???
Concentrate on your own stuff and your own lies... as shown by

Twister in your own thread.

This post was moderated 2 years ago: Report violations, don't respond to them

You're currently viewing posts by Pinsider Raaalph.
Click here to go back to viewing the entire thread.