"Get yourself a hotdog!"

Let's get a solid set of resources in one spot: What's the status of the following game-specific parts?

PLAYFIELDS:
http://www.planetarypinball.com (stocks them from Mirco)

PAINT CODES: (there are options)
https://pinside.com/pinball/forum/topic/funhouse-restore-chrome-and-mustard/page/2#post-2424502

[x] add to your favorites (do this now!)

First I've heard of it.

I used to be in it, but I handed in my resignation early this summer...

Next planned purchase MOF? I could temporarily join one.

I am doing a killer restore on my FH right now.

Love me some FH..

Yeah, I played about an hour ago. Such a classic.

Wish I could join the club but I need to find a FH first.

Wish I could join the club but I need to find a FH first.

I hear you. Unfortunately there are several other pins I'd like more than FH for the price it's asking these days. I'd need a miracle to get one.
-mof

Did anyone ever start up a FH club?
-mof

I think this is it

Unfortunately there are several other pins I'd like more than FH for the price it's asking these days.

Funhouse is my #1 target right now, but as MOF says, its asking price is a bit too high for a non DMD game IMO. One of these days I will bite the bullet.

It's getting a DMD

Hopefully becoming part of the crowd soon...taxes are done and its looking positive

Anyone know when the next run of repro playfields will be available?

Had one I restored a bunch of years ago CC'ed original PF, nice original cab, even airbrushed Rudy up all nice.
It was the nicest game in my collection, but it creeped out my wife and kids. When family and friends came over, no one ever played it, so I decided to sell it off. 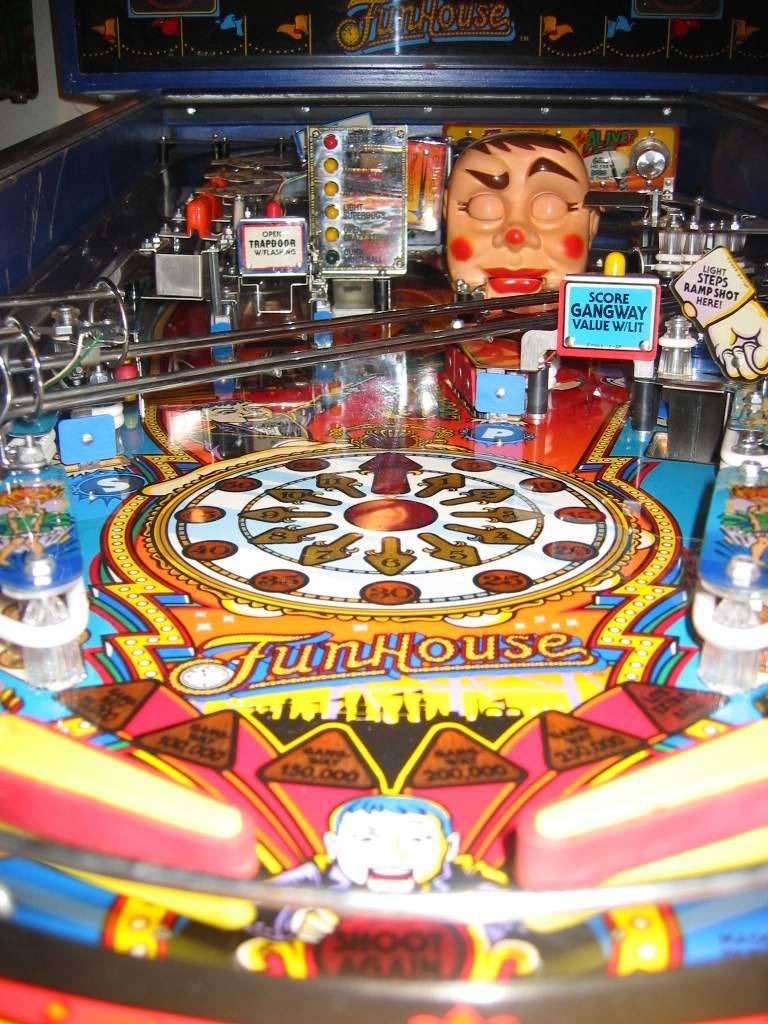 To me it's a flawless pin. Easy to understand yet hard to master. Great art, sound, player interaction ... A timeless masterpiece that will outlive most licensed themes hands down.

Not an owner, but a fan. Pat lawlor and larry demar hit one out of the park with funhouse. 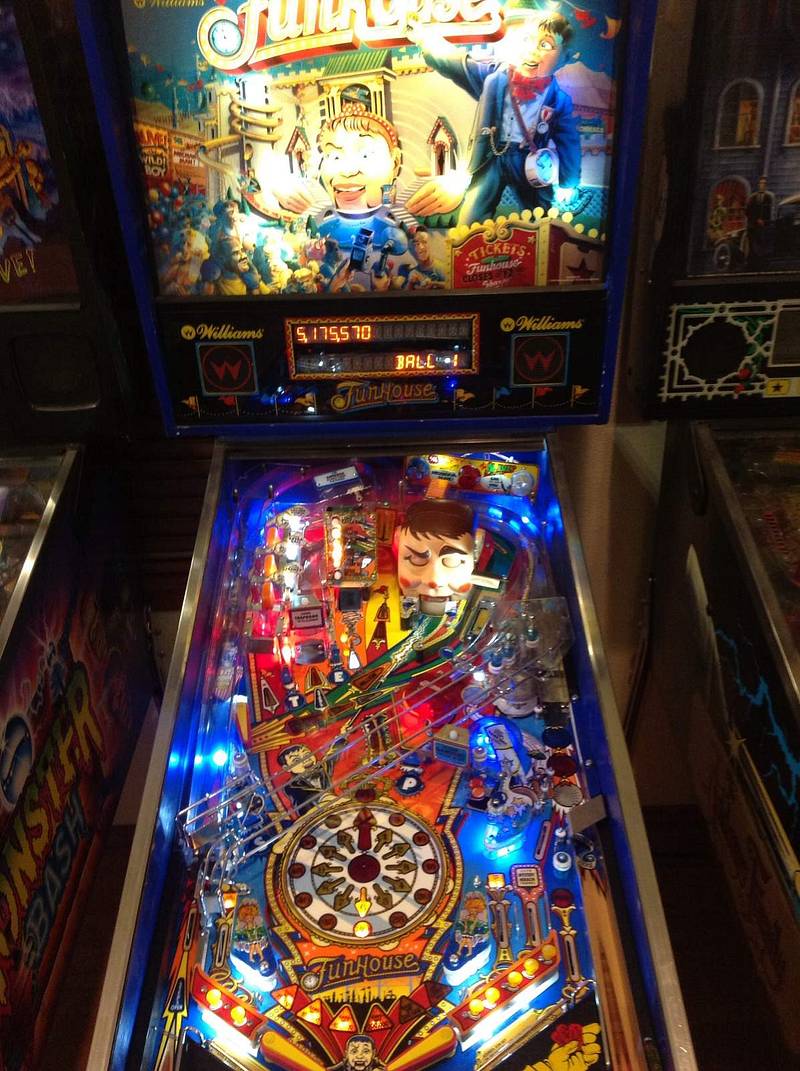 image.jpgI got 3 of them, 1 i restored and is in my game room and the other 2 i bought as projects. I've owned 4 of them. Great game, fun game, hard game. The second one i owned i bought from a guy who used it for the art scans and CAD files for CPR. I sold it to a friend that did a very nice restore job on it. The other 2 i was going to tackle some day and have been compiling parts and i have 1 new PF. Might entertain bringing one to the June Seattle pin show to sell. I do like the aftermarket pin score led for it, gets rid of a lot of heat and more compact. Plus adjustable brightness. Home roms are a neat addition i thought.

A couple of Funhouse money shots... 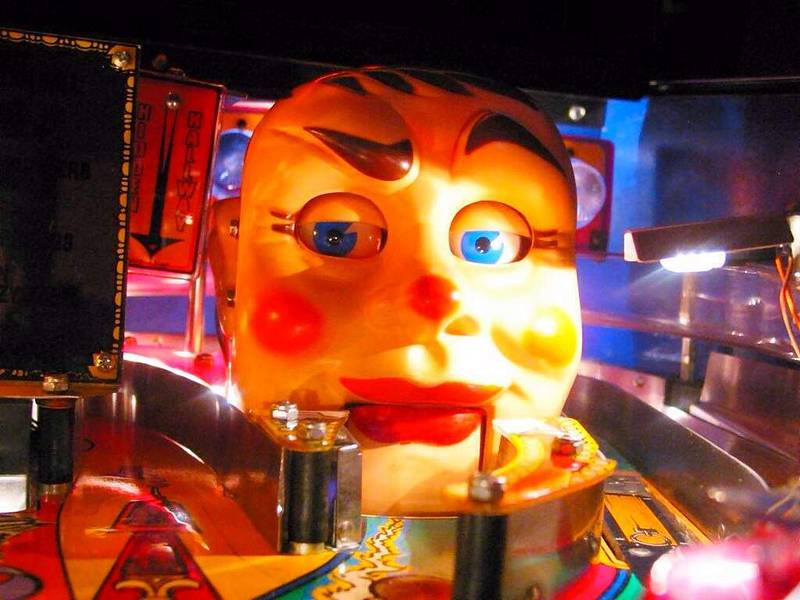 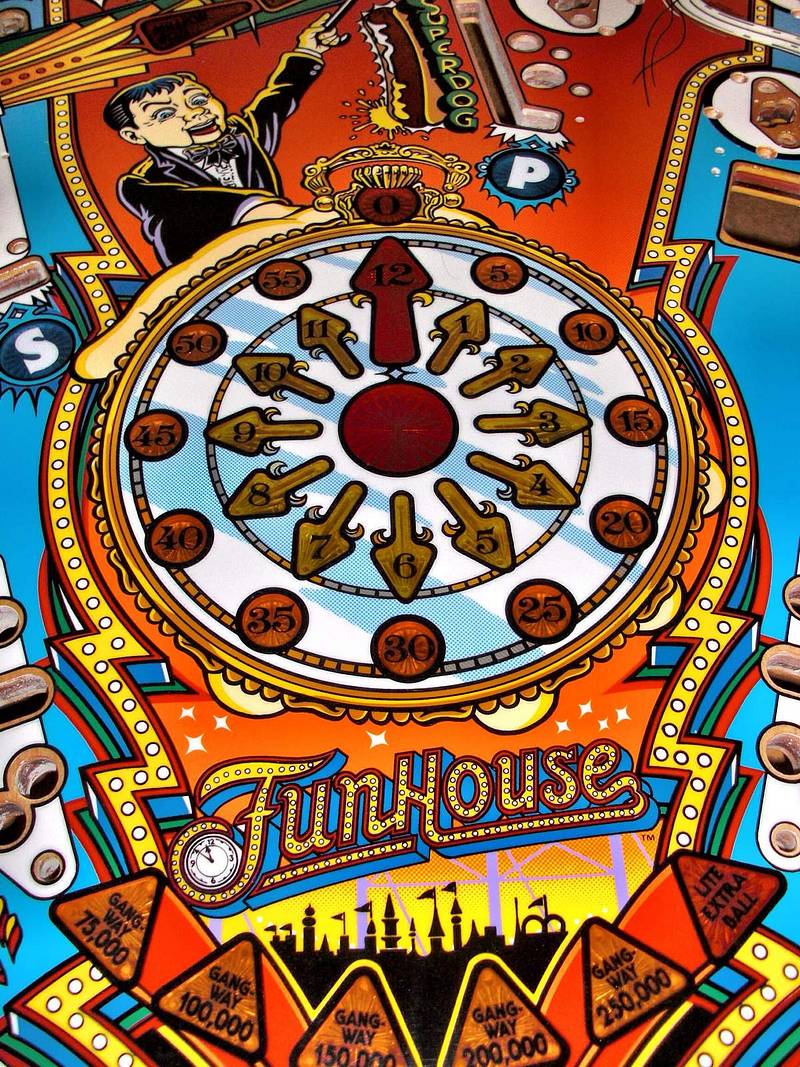 One I've always liked and finally got last Friday. My son and I have really been enjoying it. It's such a great total package. Sometimes everything just comes together.

Am installing a brand new playfield in a couple weeks! My favorite game from that era.

I was going to pick one up as my very first project pin, but it was missing Rudy,s head all together, is it possible to get his head from anyware???

I was going to pick one up as my very first project pin, but it was missing Rudy,s head all together, is it possible to get his head from anyware???

I was considering one as well that was missing Rudy's Head. From doing some homework it appears that the back of his head is not available. I passed on that one.

I enjoyed mine while I had it. Great game! 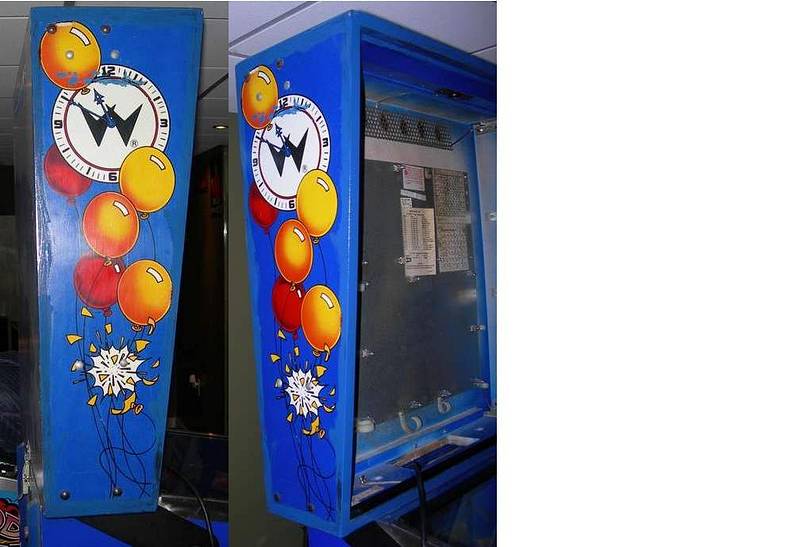 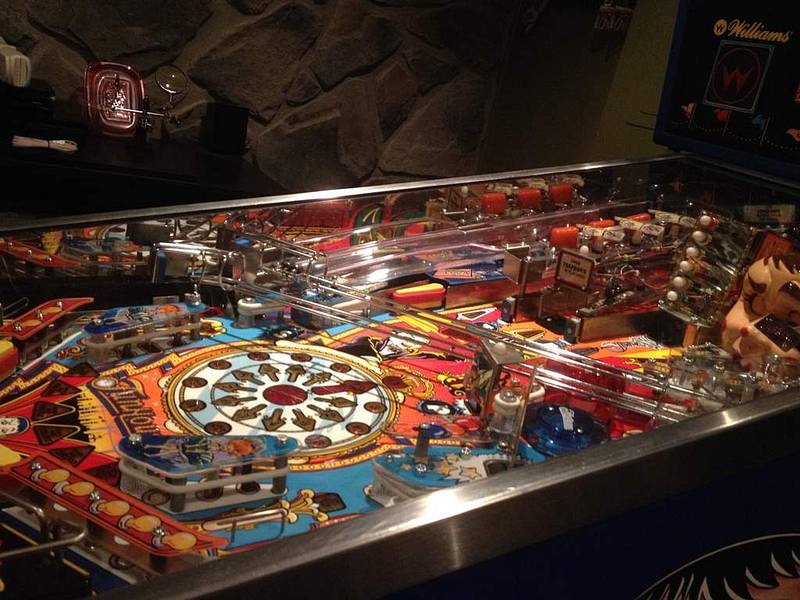 Got a question just recently rebuilt rudy. Everything got replaced inside also including the mouth gears and ball ejector solenoid. When rudy is watching me the solenoids make a hum type noise, seems to happen when the eyes are moving. but completley function as designed. So i wonder is this normal? Like i said the solenoids hum and I would rather not hear this.
Thanks Tom

I believe that's normal to some extent. Difficult to know without hearing how loud it is in person. I know with the glass off on RS and my FH it would do this too.

Got a question just recently rebuilt rudy. Everything got replaced inside also including the mouth gears and ball ejector solenoid. When rudy is watching me the solenoids make a hum type noise, seems to happen when the eyes are moving. but completley function as designed. So i wonder is this normal? Like i said the solenoids hum and I would rather not hear this.
Thanks Tom

The hum is normal. I have had my Funhouse for several years now with over 200 plays, and also have experienced the humming noise. No problems yet with Rudy.

Love my funhouse Rudy is strait up creeeeeeeeep awesome.

FH is definitely my third grail pin. Sure, I might buy something in between now and when I finally get one(like a Taxi, HS, HS2, BK, Pinbot, Comet, Cyclone, or other great classic), but a FH WILL join my permanent collection at some point. Hopefully this year, too!

Back in the days of the arcade, if there was one pin I played the piss out of the most(besides TAF), it was most definitely FH. Nothing like being taunted by Rudy!

got my funhouse from a local operator for $2800. had the playfield swapped, added leds, pinscore display, funhouse lamp shade etc. now 2.0 with dmd ? cant wait to hear more about it !!!

Funhouse was our second machine and it'll be one of the last to leave. Rudy may be creepy, but I love him!

Posted a question but got answer to question two days later from a vendor. Message still not posted due to new user restriction. Tried to remove unnecessary post to no avail. Sorry for the mess folks.

Um... Can I delete a post entered accidentally? (This one). I'm just a confused new user.

My first big restoration attempt. The machine worked well before I started, just hoping it still does after all the work! 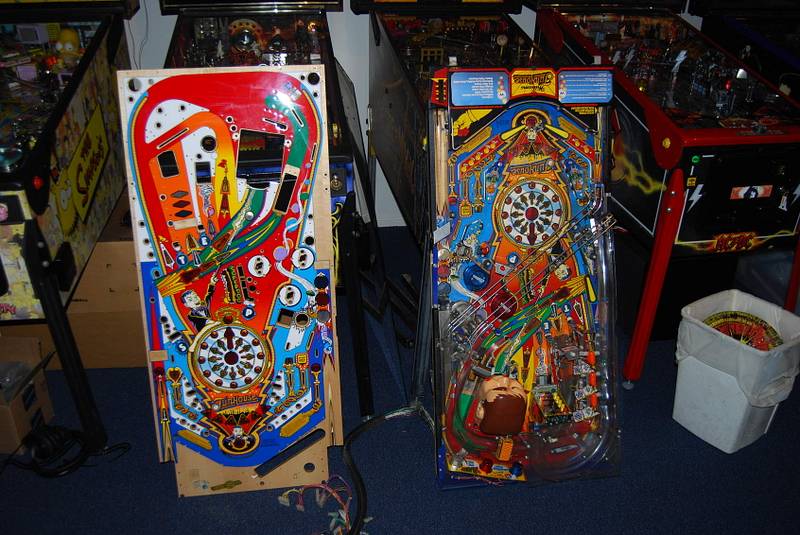 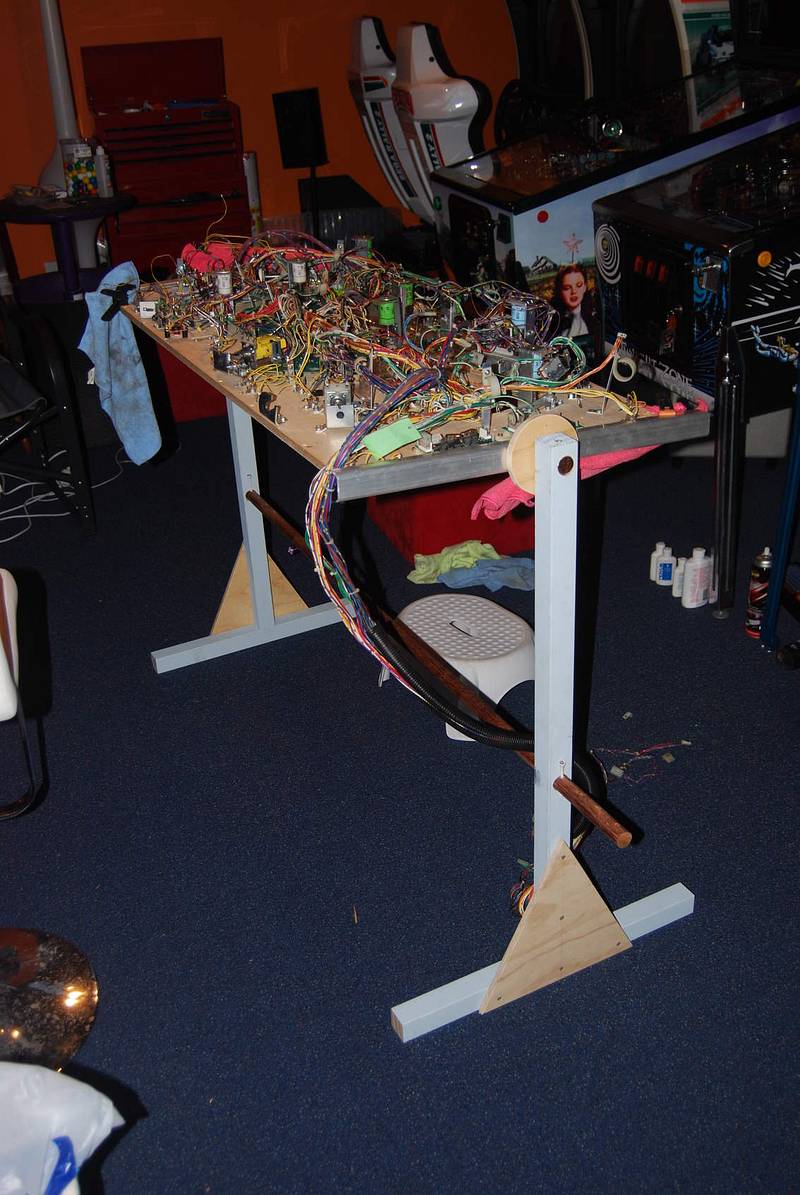 I'm going to powdercoat the legs, lockdown, siderails and hinges. Any ideas on colors? I've seen red, but didn't know if blue would be better.

I bought my FH quite by accident.

In 1994 I played a lot of Party Zone at a local arcade. I called operator and asked if he would sell it. He said yes for $1300. This was in early December 94'. I have 3 sons, so I decided that Party Zone pinball would be my/our (wifey too) only Christmas present to everybody at $1300.

We left town with family for Christmas week to return on Christmas day. I gave my neighbor $1300 cash, to have the game delivered in my garage a few days prior to Christmas. I kept calling because he didn't show up and the guy decided not to sell the "so cheap", in the 11th hour. We were devastated to explain to our young sons (twins at 8 and my oldest at 10) there was nothing for Christmas.

I got on the phone and called any/all Arcade Amusement places I could find from the yellows pages back then, no internet. One OP said he had a FH in his shop. I never knew what FH was or even heard of it. He assured me he felt it was superior to PZ. I was desperate and he delivered it 27th for $1300. We still have it (plus 30 others) and the rest is history!

Great story Kerry_Richard. You certainly got the better game! It was a Christmas miracle!

PArt of this club but mine is in bad need of shopping, missing some parts and a hot(dog) mess right now.

This was my second favorite pin in the arcade after Pinbot.

Funny ass thing happened the other day when I was playing, actually two funny things, and I've put a lot of games on this machine. I have no idea what the odds of this are, but curious if either of these has ever happened to anyone else.

So like 3 games in, somehow the ball ricocheted off something, became airborne, and actually landed right on the metal stairs ramp above. That very same game, a shot ricochets off the post to the right of Rudy's mouth, bounces up, and dents the SOB right in the nose. There is a very nice large dimple there now. I was going to fix it, but every time I see it, I laugh so it is staying like that. I will take picture later.

Today was a good day for me. 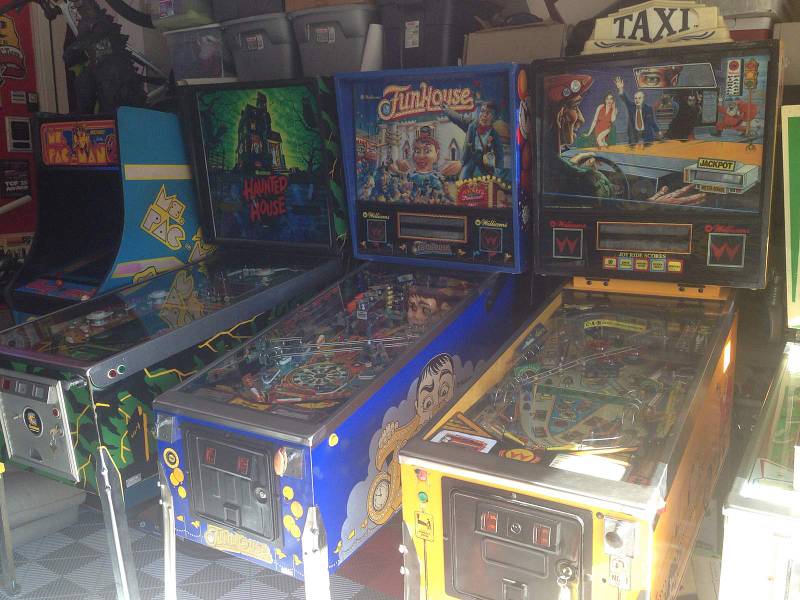 nice. Even better day when you turn them on!

Nice. That is what I call a very good day. Love FH. What is the going price for a nice FH? I've seen them go for $5k and up. You don't see many go for sale so not sure what's realistic.

Nice. That is what I call a very good day. Love FH. What is the going price for a nice FH? I've seen them go for $5k and up. You don't see many go for sale so not sure what's realistic.

Don't remember whether I officially joined but I'm in. Love this game, so much fun and an international active toy you really interact with-often means cursing Rudy out!

FH joined my collection summer '13. I took these pics for Cliffy and his color posts. This was a game sitting in a barn with water damage in King Salmon, AK. The PF was sent to Playfield Renovations and it is too bad they are not around anymore. My MM PF from them is just as gorgeous. This FH is from a friend's collection who also restored my T2. 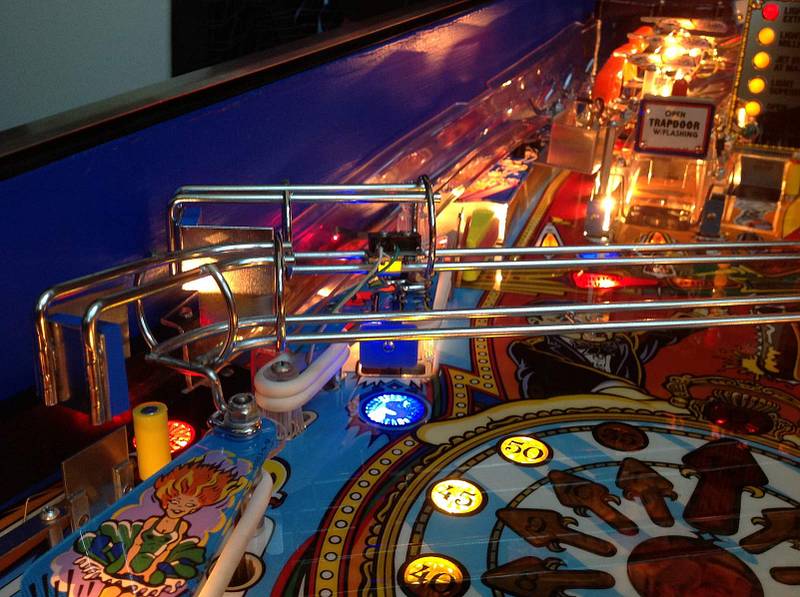 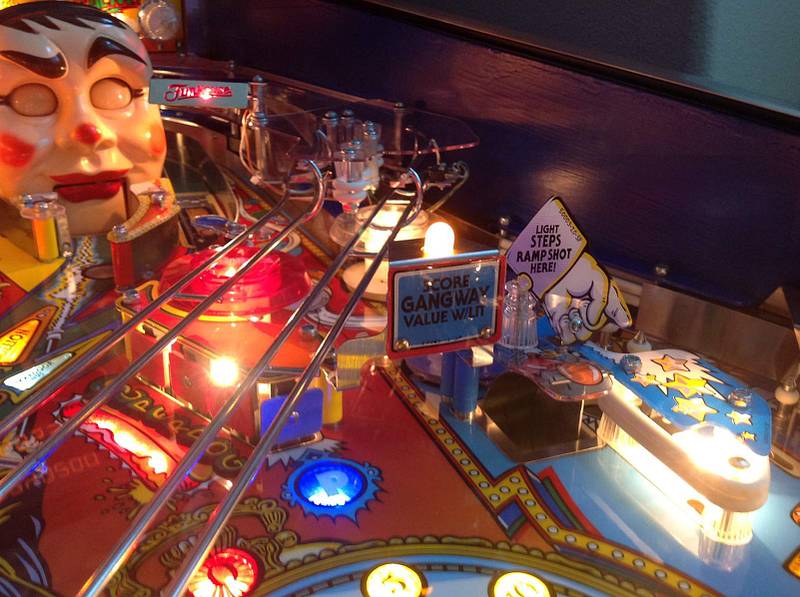 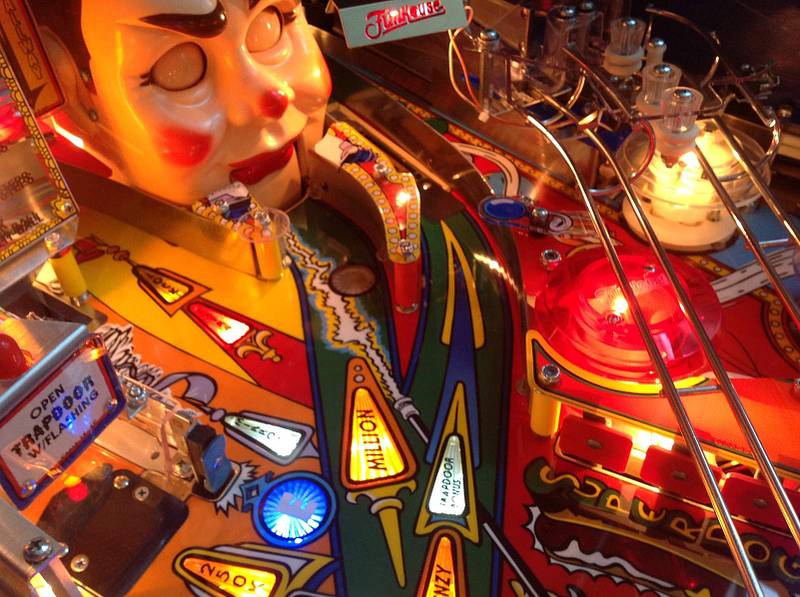 Here are some pics from my Funhouse:
http://www.pinballsupernova.com/funhouse%20present%20pinball%20picture%20collection.html

Here is the video of game play:

What are the best mods to do to the game? I am particularly interested in HOME ROMS and a TOPPER but have no idea about either.