This fall I'll be taking Fun With Pinball (https://www.FunWithPinball.com) on a road trip. The primary destination is Chicago where I'll set up the exhibit at Pinball Expo for the first time. If you're headed to Expo please stop by and say Hi.

To get to Expo I'll be driving round trip from Denver to Chicago in mid October. I hope to arrange stops along the way similar to Nic's North American Tour from a couple of years ago. I can offer EM pinball repair classes, workshops, guided EM repair days or just EM repairs to small groups or individuals. PM me if you'd like to arrange a visit of some kind.

(For those who don't know me, I post mostly in the EM tech help topics.)

Come down to Florida! There is a lot of EM love in south Florida!

I know Florida is a major detour, but Mr. Volta had a good time down here!

There is a lot of EM love in south Florida!

Good luck on your trip, Mark!

Come down to Florida! There is a lot of EM love in south Florida!

Probably not on this trip, but I'm open to suggestion. PM me if you have ideas.

Good luck on your trip, Mark!

There's been some interest in a stop near Lincoln, Nebraska. If you're in that area and might be interested in a repair class (https://pinside.com/pinball/forum/topic/em-pinball-repair-class) or a workshop or some EM repair help get in touch via PM or through the web site.

You should swing through Alaska. That's not too far out of the way is it?

Hey Mark! Best of luck on the mini-tour! Are you getting enough traction to fill in the stops along the way? I may have some contacts who could use your help if need be... just lemme know.

Shame to come so far north and then miss the greatest state of the union, Ohio!

Are you getting enough traction to fill in the stops along the way?

I think I need a new set of tires.

There's been a little interest which is nice but not a lot. I just don't have your star power. I'm more of the stealth guy flying under everyone's radar. Feel free to PM me if you have specific contacts.

There's an EM Pinball Repair class coming up in Lincoln, NE on 10/12/19. Limited space is available. The class description is at https://pinside.com/pinball/forum/topic/em-pinball-repair-class. PM me if you're interested.

A couple of folks have asked so I thought I'd post a short road trip epilogue.

I've taken the exhibit on the road before but hadn't tried to take as much without hauling a trailer. Even after a fair bit of planning it took several days to pack the car with more than should reasonably be expected to fit in it. After entirely removing the rear seats I finally managed to squeeze it all in apart from our baggage which rode along on the outside. 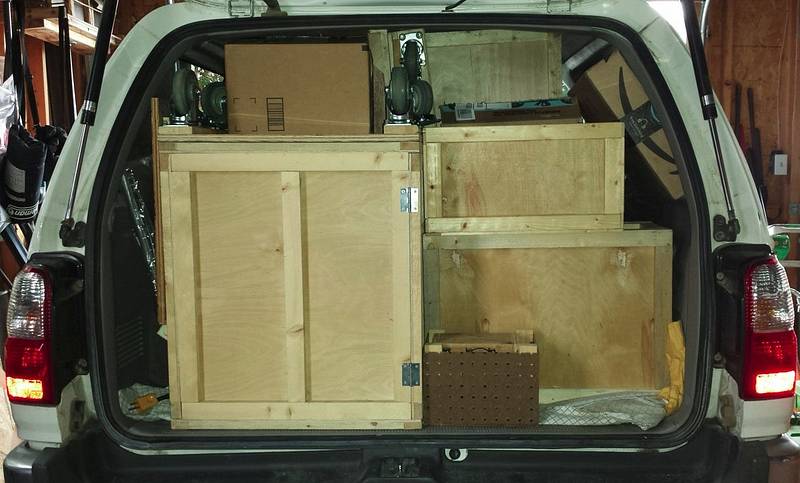 Packed full (resized).jpg
The first stop was in Nebraska to teach the EM Repair class to a small but enthusiastic group of collectors. The class typically takes two days but these guys wanted to squeeze it all in to one day and to bring their games to work on. So we rolled with it and combined the class with a hands on lab to sort through some of their game issues. It was a long day, breaking only for some yummy burgers, but I think we got through what they wanted to get through.

The next stop was with a collector in Illinois who has a nice variety of EMs, many of which needed a little love. We spent the day talking shop and getting several games up and running, again only stopping for some yummy burgers. I lost track but I think we got 4-5 games running by the end of the day.

The final stop was the 2019 Pinball Expo. Rob, David and their crew helped me move in to the small, relatively quiet room near the vendor hall where I set up for the weekend. For three days I had a steady stream of friendly folks wander through the exhibit. I met lots of folks, some from abroad, some whose names I recognized but had never met, and even a few who said that the exhibit was their favorite part of Expo. Thanks to everyone who stopped by and thanks Rob for the Spirit Award (https://pinside.com/pinball/forum/topic/official-2019-pinball-expo-thread/page/21#post-5268582).

But after a week and a half on the road and a couple of thousand miles driven with a car full of wooden crates it's nice to be home.

Finally, there's a chance that I'll be in Florida before long. If anyone in the area is interested in an EM Repair class PM me or reach me through my web site to see if we can put something together.

Recently used the flipper guide/video when rewiring some flipper coils, the explanation was fantastic.

For those who didn't get to see it in person Todd Tuckey of TNT Amusements put up a nice video of his visit to the exhibit at Pinball Expo 2019:

Mark spotted us in the hall..I had not gotten to any of the back rooms yet and he was starting to pack up too...fortunately, I was able to film this (on my cell phone of all things) but it came out pretty good and shows all of his amazing exhibits! Todd

That was so cool. Way before my time but love seeing how all the old stuff worked

Even though most new machines are running basically a pc as the processor these days all the pf mechs have not really changed, still all switches and coils.