This is my first pin and am just beginning to understand how they work. my machine works great, but does not award the bonus. you hit targets to light up ducks/numbers in a circle. Spinner targets advance a pointer and if the pointer land on a duck/number that is lighted you are to get a bonus based on what color indicator is lit up red, yellow, or green. when you collect the bonus the targets and ducks reset. On my machine the ducks lights up, the arrown goes around, but no matter where it lands nothing happens. can anyone point me in the right direction to get this awesome feature working? 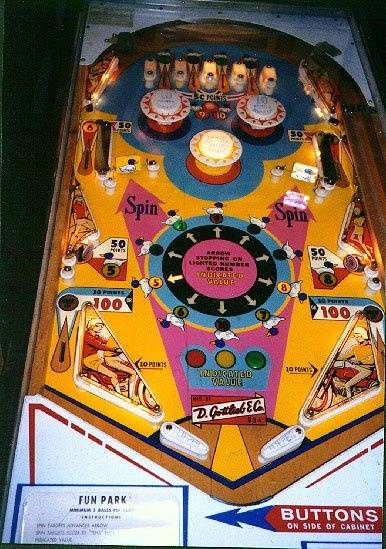 When a game needs to do something once a spinner has stopped, like award points, there's no good way to do that. You can tell that the spinner has stopped by looking at it but the game normally as no trigger that fires once the spinner stops. Instead the game has to wait a fixed period of time once it sees the spinner start and assume that the delay is long enough for the spinner to have stopped before taking the next steps. The way it does that is with a delay module (in the red box):

Fun Land Delay relay (resized).jpg
When either spinner starts turning it fires the B/Swing Target relay in the lower left. The B relay closes a switch in the upper right that sends power into the delay module. The capacitor starts charging and eventually builds up enough voltage to fire the A/Spin Delay relay after a brief pause. A switch on the A relay then fires the C/Spin Spotting relay (not shown) which should fire up the Score Motor and award whatever is due.

The delay module is usually assembled on a small jones plug and mounted near the relay it drives.

Fun Park may have the same relay names. But either way the process should be the same. You should see one relay fire when the spinner starts turning, another fire after a pause, and then a third relay firing and the Score Motor start tuning after the pause.

Nice game! I haven’t had the opportunity to play a Fun Land/Park yet, but always thought they looked fun (kinda like my Ship Ahoy with the wheel lights controlled by a spinner).

Sorry to say that I don’t have a whole lot of input for your problem though. Having the schematic would be a big help. If you don’t have one yet, get in touch with PBR (PinBall Resource, not Pabst Blue Ribbon, although a cool Pabst wouldn’t hurt).

See if you can find the relays that Mark is talking about, he’s a pretty sharp guy.