I did a playfield swap on EBD. Turned it on. Booted fine. Walked away for 10 minutes. Came back and smelled something burning, but no smoke and no obvious burned pieces.

Sound no longer works and GI fuse 20A blows as soon as I turn it on.

Am I looking at one problem or a host of problems? Its just weird that it was fine for 10 minutes or so.

From what I see: You have a 20 amp fuse blowing, and that is a lot of current. Most likely a direct short somewhere - a bad socket, a socket shorted against something else or something like that. No sound is likely a separate problem, as sound is generated in the backbox, a separate circuit from the GI. Solve one problem at a time and you should be fine.

Sound needs the G.I. ac functioning to work. I just had a call where the 20 amp fuse holder metal was very much discolored and needed to be replaced.

Not saying this is the OPs issue at hand.

Chad replied while I was scanning this...

Chad replied while I was scanning this...
[quoted image]

Ahh, didn't know that. Grabs gen illumination bus to make -5V rail. That changes things a bit, since the problem could be there. I'd probably disconnect that connector that feeds in, troubleshoot the GI (if still failing) then examine these few entry components before reconnecting.

Thanks all. I hope to get back to it tomorrow or Friday. Will report back when I find the issue. Cheers.

Did you pinch the ground strap in the head against one of the GI wires for the back glass? That's a nice dead short.

You accidentally shorted the GI when you put the game together. Make sure none of the GI braid wires are accidently sorted to the Switched Illumination bus wire or ground shorted.

I am going to pull the playfield tomorrow and put it back on the rotisserie.

Also discovered one pop bumper isn't firing. Switch is making contact. Does not fire in test mode, but light on SDB board (alltek) lights.

Have you checked the GI VAC from the transformer? It may have shorted internally?

Remove all plugs except for the main transformer to the power supply board and see if it blows?

Have you checked the GI bridge? It may have shorted internally?
Remove all plugs except for the main transformer to the power supply board and see if it blows, if it does I reckon it's the GI bridge.

Removed the plugs and the fuse did not blow. However, one terminal on J3 is all gooed up. Is that something that can be cleaned up, or is it in need of replacement? 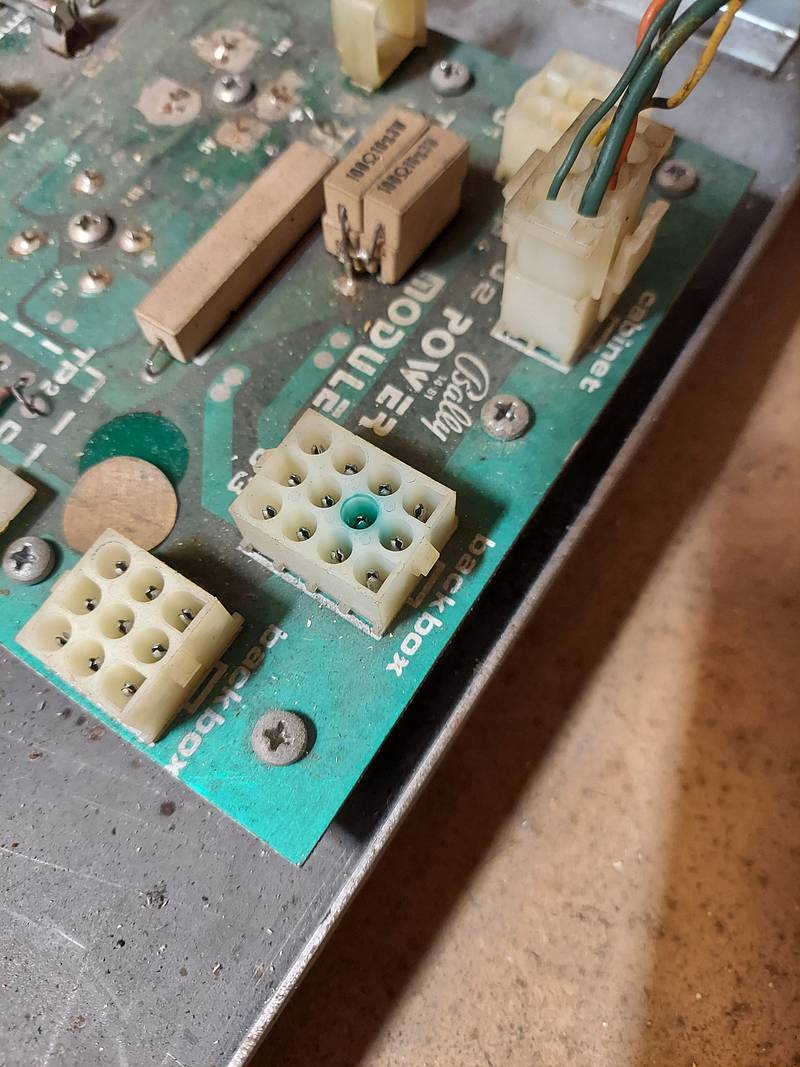 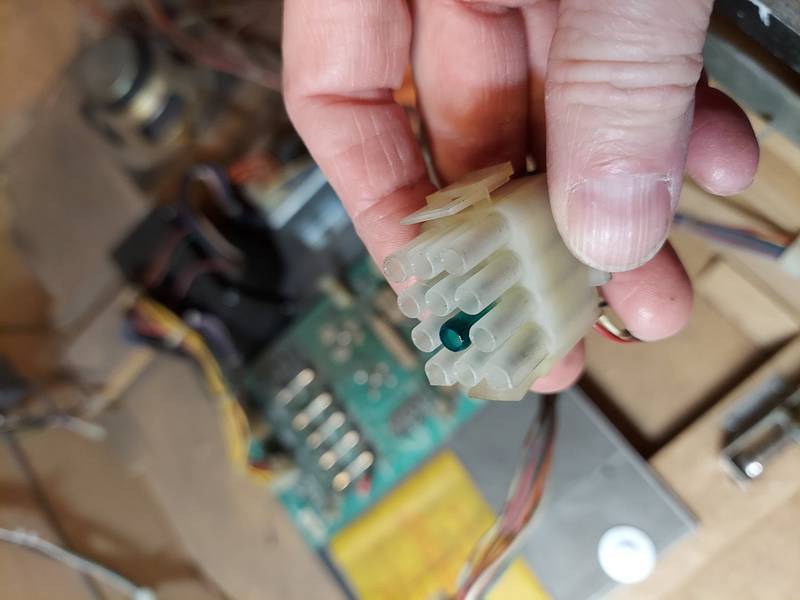 I must start with referring to the GI having a Bridge Rectifier related to it, my apologies, I was wrong and thinking of the Switched Illumination.

I have just had exactly the same thing in a Bally Vector, the green slime on one pin.

I believe it to be the 'breakdown' of the cable insulation itself.

I used a cotton bud with methylated spirits, an alcohol.

If you are unable to remove the pin that is.

And also a small stiff haired paint brush or baby screwdriver with a rag on it to get in and around the pin.

But, that won't be causing the fuse to blow, but still should be cleaned up IMO.

Also just my opinion, but I see the four 100ohm in parallel resistors to give you your 25ohms, I'd be swapping it out and the 600ohm and raising them off the board, but this isn't necessary for your game to work.

As your GI has proved good, I'd be plugging the connectors onto the power supply board one at a time to see what part of pinball is causing your 20A GI fuse to blow.

A pic of the reconditioned power supply 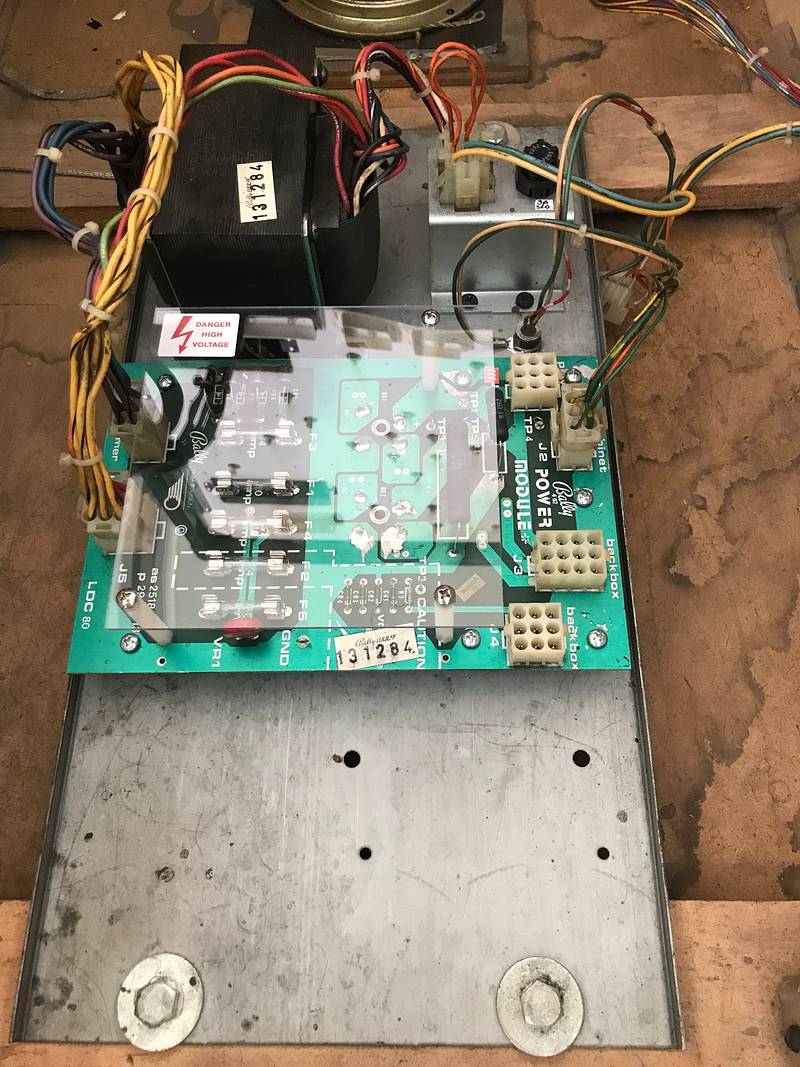 As your GI has proved good, I'd be plugging the connectors onto the power supply board one at a time to see what part of pinball is causing your 20A GI fuse to blow.
[quoted image]

It looks like it is J1, the playfield harness. That makes sense, since I just finished doing a playfield swap.

I will take another detailed look at my wiring under the playfield and then methodically go through each wire, using photos I took and the schematic.

Thanks for the green slime cleaning tip. I will give that a try.

Problem solved ! The G.I. lamp for the star rollover in the upper left of the playfield, had gotten smashed where both sides of the socket were contacting each other. Kind of a tight spot to put a lamp, imo, since the cabinet rail rests right next to it.

Also, is the 40,000 green insert lamp supposed to blink, like the others? Mine does not. Even in test mode.

Thanks all for your help!

well done, great to hear it's all sorted

Thanks for checking. I'll have to investigate and see if it's a bulb issue or light board.