I have a Duotron and an Outer Space in nice condition wrapped in my garage. I want to bring one inside and set it up. I've never played either and barely played any EM's in my life. The artwork between the two is a toss up, but I think I like the backglass on Outer Space better. Is one more fun than the other?

Play them both and decide forn yourself

And then learn to type properly. Lol.

Honestly, both are kinda “meh” games, but I’d give the edge to Outer Space. It has a fun spinner shot, and a nice clean shot to the vari target.

Duotron is too symmetrical, and I lose interest in it pretty quickly.

It's Outer Space in my book

Play them both and decide forn yourself

Thanks, but I didn't want to set both up because I don't have the room right now. I was hoping to get a nudge from someone to make up my mind.

I'd set up Outer Space (because of the vari-target and spinner), give it 2 months. If is gets boring, rotate Duotron in. Give that 2 months and then choose.

I agree on Duotron being an okay or 'meh' game, I didn't keep mine too long but it was decent. Outer Space looks like a better layout to me with the vari-target and spinner involved in the bonus, even though it is totally bonus and point-oriented with no sequences at all. I'm sure I've probably played one way back then in a bowling alley as a kid but too long ago to remember.

It's Outer Space in my book

Outer Space all the way, almost regret selling mine.

Hi herbertbsharp
at the time there were mostly 4-Player-Pins imported into Switzerland. In the (early to mid) 1970ies I have played many pins - have played Magnotron and Orbit - from around 2009 on I started to buy me my old darlings --- I do have an Orbit but not an Magnotron. Greetings Rolf

My vote is for Outer Space hands down. Played both back in the day. Had fun with OS but playing Magnotron/Duotron was like having a moderate leak in a tire, then watching it go flat.

I do like the artwork on both machines, but still prefer OS artwork better.

Duotron didn't even last 2 weeks in my house.

I vote Outer Space (not played) vs Duotron (own, play often) - the playfield seems to have a lot more going on. Once you master banging the captive ball back and forth without draining, Duotron is pretty easy to rack up points, except for lighting up the special which is damn near impossible unless you hit the A lane at the start of play.

It's been a great first game (not too much going on under the playfield so not bad to keep running) but I could see trading up at some point.

Duotron for me plays very posty,
i.e. ball always seems to hit the posts surrounding the spot targets or captive ball horseshoe.
Outer Space looks like it would be fun layout to play,
but was still disappointing to me when actually tried it.

No help on the spot targets, but I've gone back and forth with the captive ball. My game came set up with individual rings around posts, but when I ordered a ring kit, it came with a 4" rubber ring that wrapped completely around the captive ball island. Apparently this is the way it was designed (see flyer excerpt below). Definitely make the captive ball less posty, maybe too easy to hit.

You miss that satisfying click of ball-on-ball contact. But the larger captive island ring is a lot more springy for balls in upper playfield area.

I'm definitely in the fence, have set it up both ways, but I seem to have settled on the larger ring at this point. 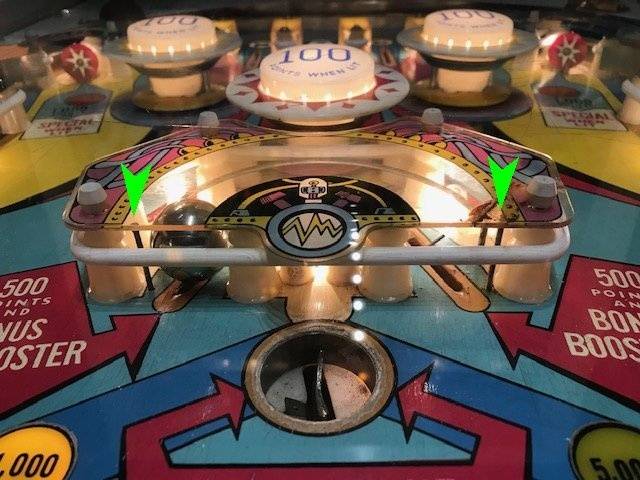 I bought and sold a Duotron in under a week. Such a boring game.

When I'd shopped my Magnotron (forgot it wasn't the 2 player I had) I assumed there were just the posts around the captive ball with no large ring. And now that I think of it that makes the shot not worth as much since the ball won't bounce back and forth as much (or at all) and rack up more bonus. Probably hurt my overall opinion of it.

Note to self: ‘Do not buy Duotron’.

Never played Duotron. But I have played Outer Space a lot. Probably one of my most played games. Always seems like I want to play it just one more time. That's the sign of a good machine.

When I'd shopped my Magnotron (forgot it wasn't the 2 player I had) I assumed there were just the posts around the captive ball with no large ring. And now that I think of it that makes the shot not worth as much since the ball won't bounce back and forth as much (or at all) and rack up more bonus. Probably hurt my overall opinion of it.

Think it's a timing thing, but bouncing back and forth (which does happen a lot) only scores 1x (3 bonus advances for 5-ball, 5 for 3-ball) - I was worried about a double score making the captive hole even more valuable, but I've never noticed that. As opposed to the upper kickers - where the ball does get hung up and score multiple times.

Still, it's pretty easy to hit the captive ball if one catches the ball, either shooting same side (left-left or right-right) or crossing over - so all it takes is 1-2 good balls to rack up a good score.