does your 2year old pinball ??? 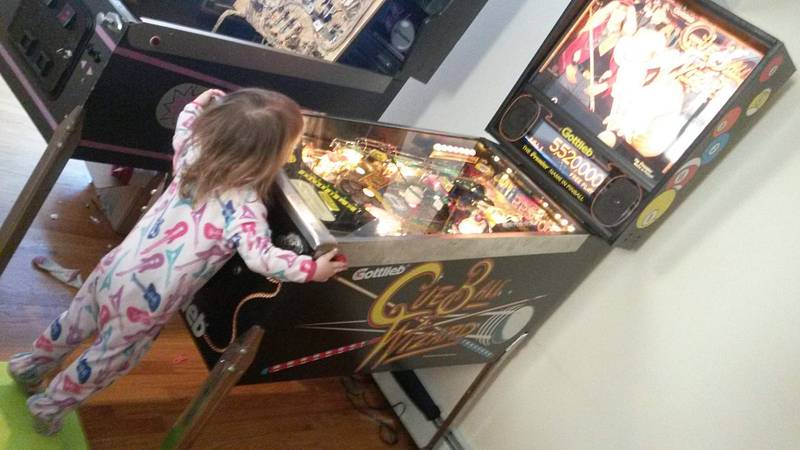 My little girl love pinball !!! No monkey flippers here either 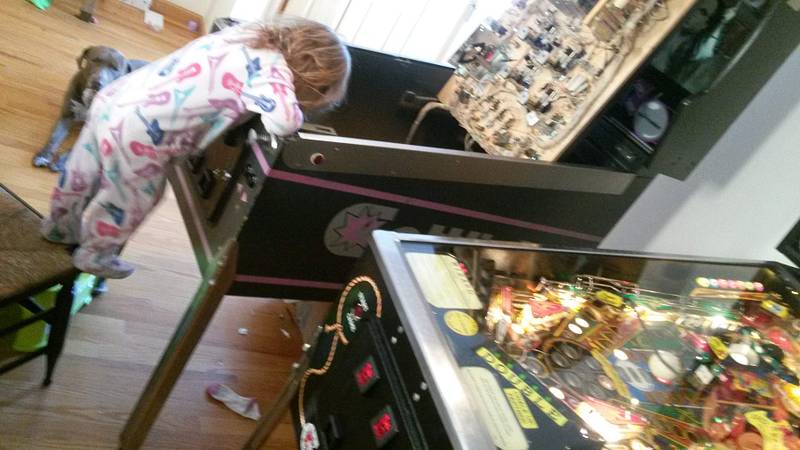 I did show him the service buttons and went into sound test on POTC, he had a blast with that.

My son has played ever since he was 4 and always wants to play ACDC, he's pretty good too, cradles the ball, gets multiball on his own. Just a hoot to play with him. 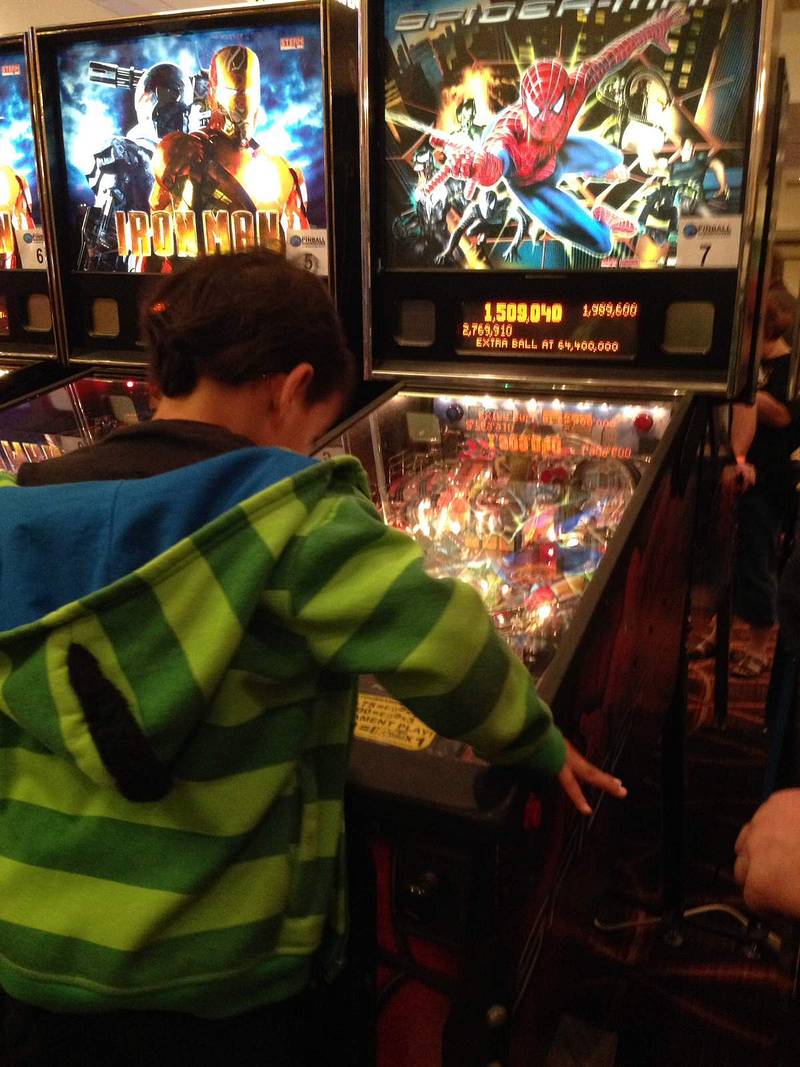 My boy has been around pinball since he was born (now 2yrs). He's getting better sorta. Never knew when to hit the flipper button before but is now following the ball and hitting pretty good. He gets distracted though by playfield toys, artwork, and the DMD sometimes and that's not helping. 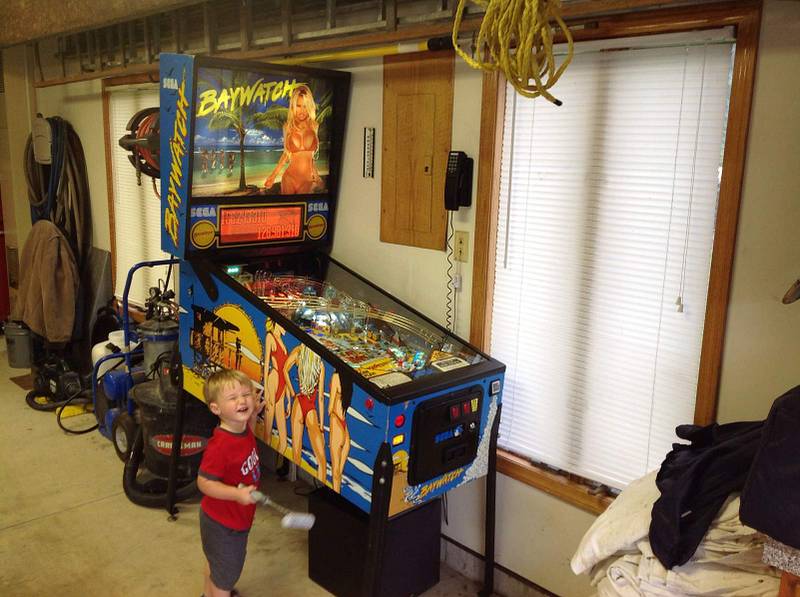 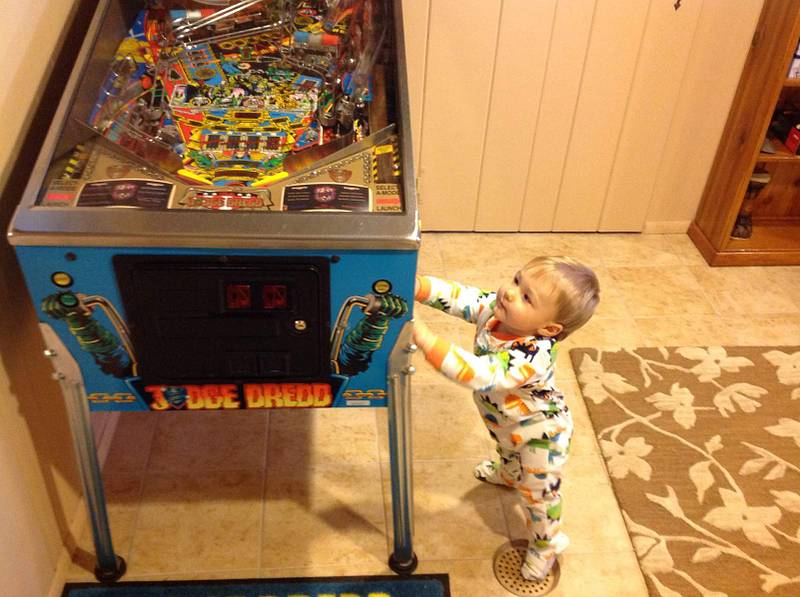 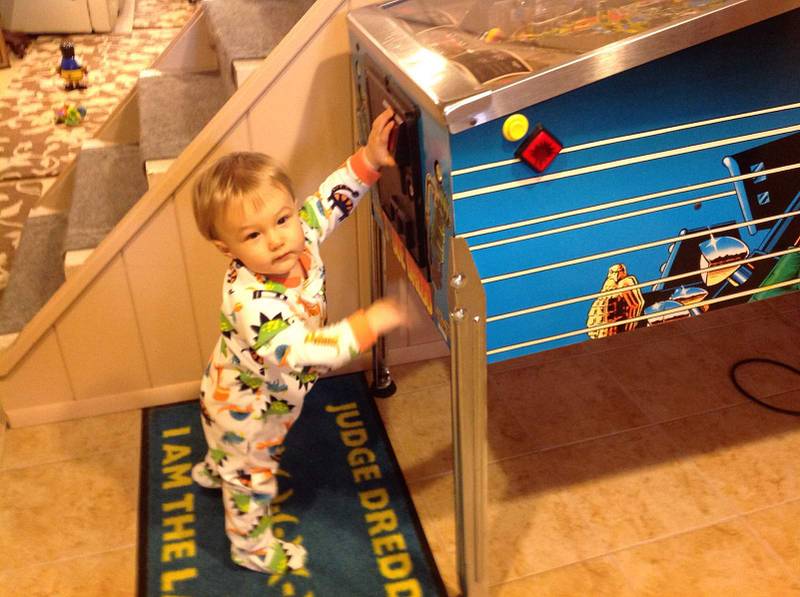 My son has played ever since he was 4 and always wants to play ACDC, he's pretty good too, cradles the ball, gets multiball on his own. Just a hoot to play with him. image.jpg (Click image to enlarge)

My 5 year old plays and isn't too bad. My 3 year will start games and press buttons but he doesn't really pay attention. My 11 month obviously isn't playing yet but she is fascinated by the lights. 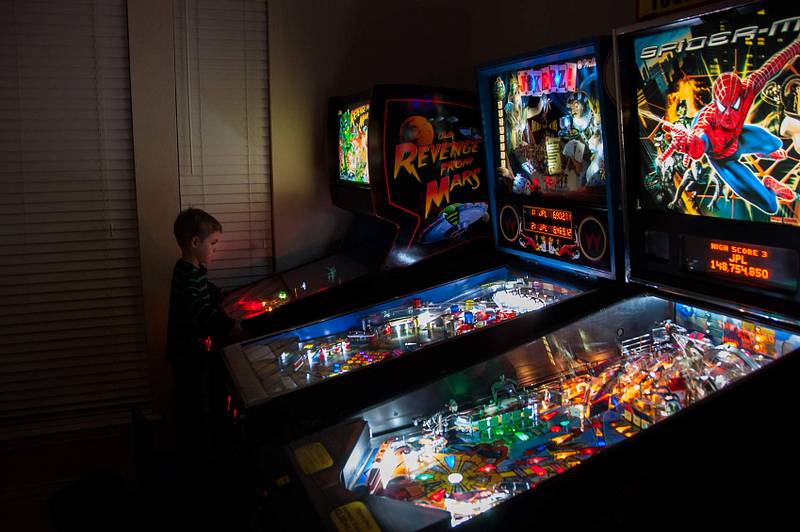 My daughter loves watching. She's 0, so no flippers for her, yet. 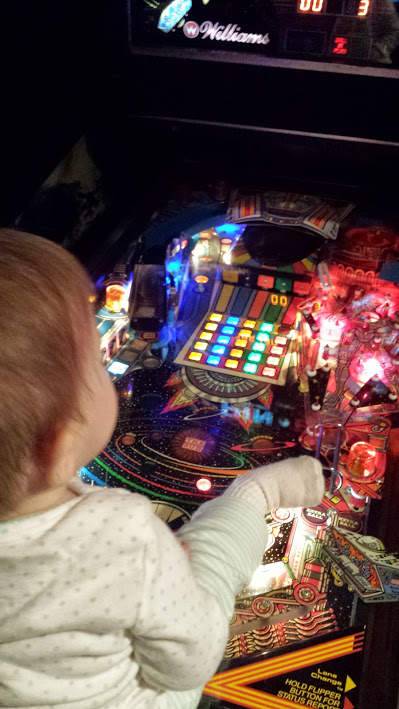 It's a work in progress. The 2 older ones are really not into it. This last one will be tho. She loves dr dude. I have it pretty colorful. She is 1. 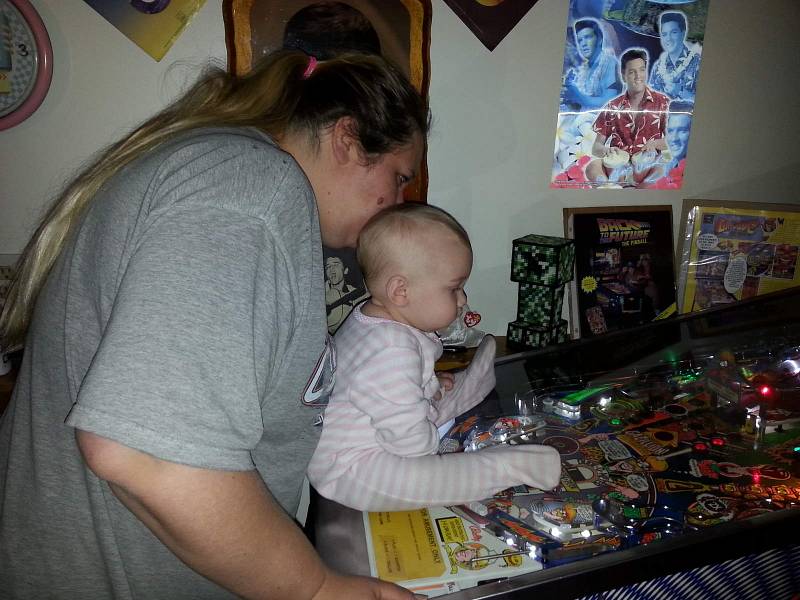 Nice to see the future in pinball.

My son is 18 now but has had no interest. For the last 9 or so years he has only played a handful of games.
When I had arcades on location he could not get enough of the star wars trilogy though.

I guess to some Call of Duty is better.

I have two of them - you want one? 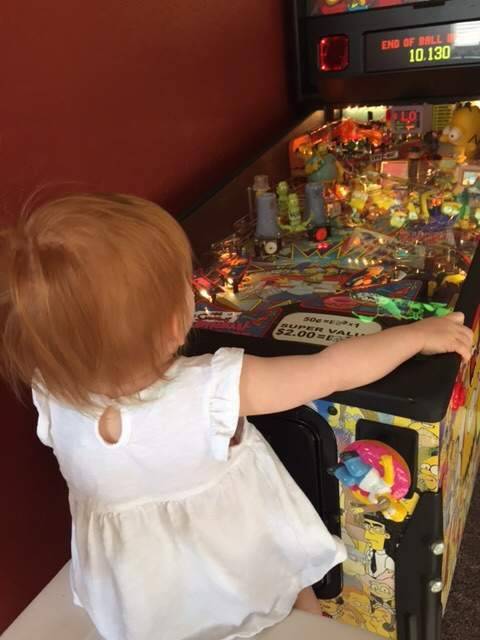 My boy was 2 years old when I bought my first pin (STTNG) and he played the crap out of it. He still loves when we find one out in the wild.

I did show him the service buttons and went into sound test on POTC, he had a blast with that.

I did that with my boy too, he especially loved the FGY sound bites. Every once in a while he does his best Stewie impression and says "You have smelly dog farts" and "Oh, oh, this here? This is just my package". Cracks me up every time. 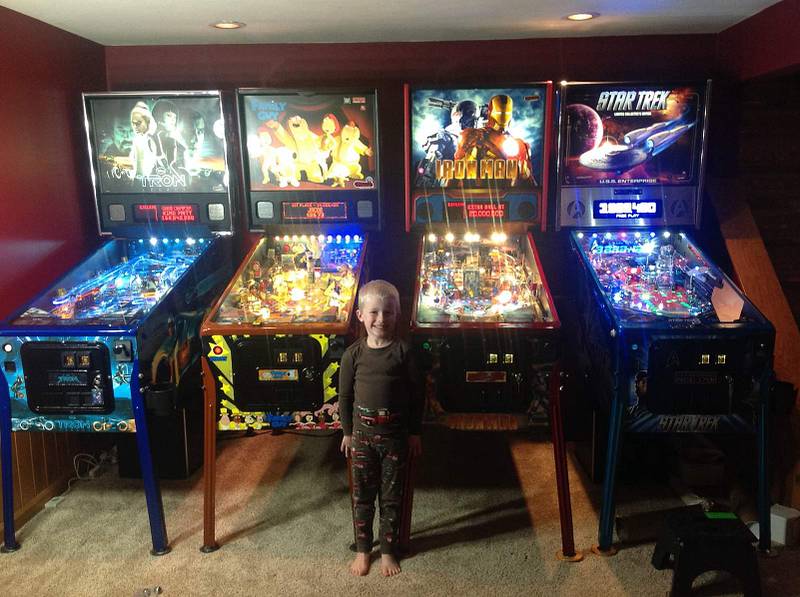 When my daughter was an infant I would play pinball with her in the baby bjorn. Now she is 2 1/2 and has her own pin (I bought her a ZIZZLE POTC for xmas). She told me that she would share with me. Her favorite game by far is WOZ, she always wants me to make the monkey get the ball. She is just now starting to be able to flip by herself but mostly just likes pressing the buttons or sitting on the stool in front of me when I play.

Yessssssss. My 2 yo son loves to "pretend" to turn them off and on by tapping the sides since he sees me kinda reach under them to do this. He's not able to handle a full plunge yet but can hit the flippers some.....yet his attention span has him on each machine about 2 mins until he's on to the next one. Ah well....he will get there 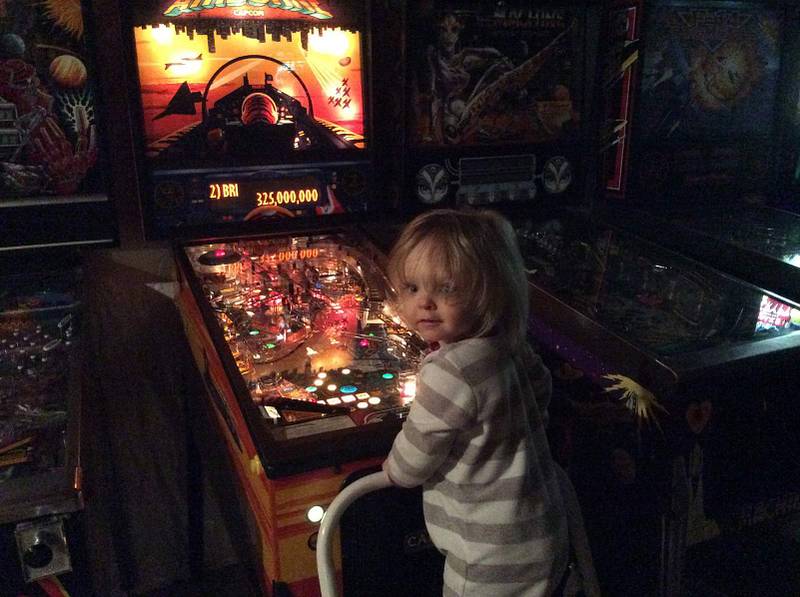 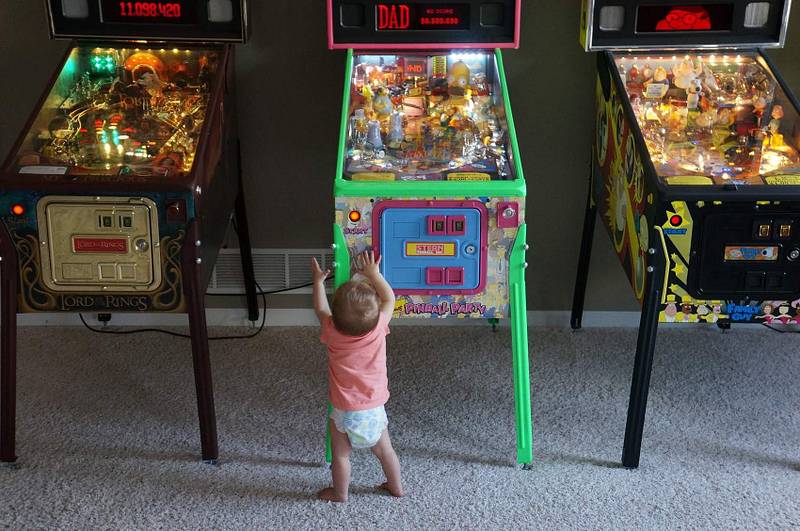 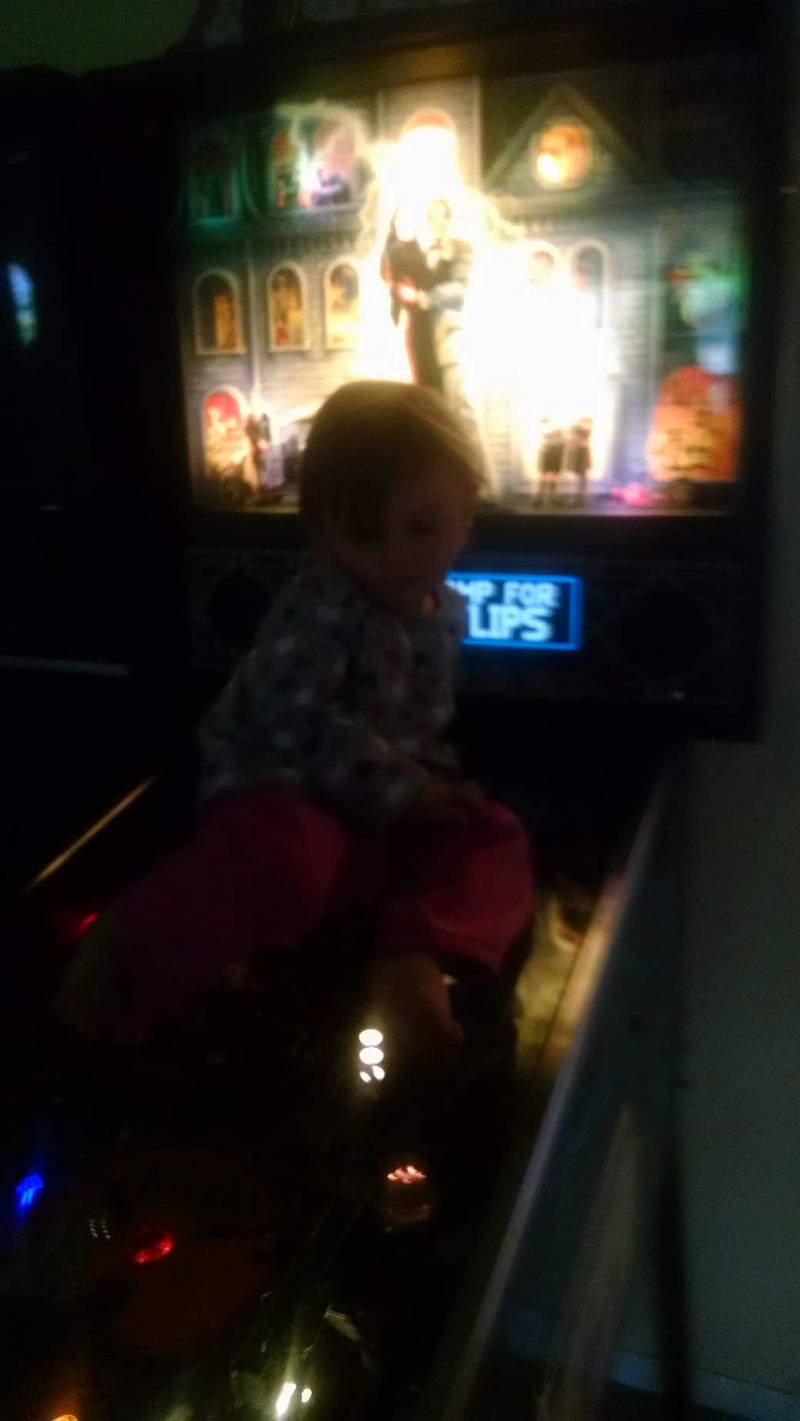 My niece is 3, she whacks the flipper button but doesn't follow the ball at all.

Cute kids. Miss those years. Mine are a bit older and more into video games. Right now my boys are playing some stupid free computer game. I don't get it. We even have better video games but they are more entertained by stupid, basic games. They rarely ask to play the pins and when they play it is not for long. We were at an arcade for hours yesterday with many pins but my boys barely touched them. My daughter was bored and kept asking to go home. How can you be a kid and bored at an arcade? Kids these days...

My Twins are 4 now. They started at about 2 to be able to sit on a stool and reach both flippers. My Daughter is better at watching the ball and flipping at the right time. My son, is still at the point where making the most noise is his goal. Therefore, Kings and Queens with "Instant Multiball" and the large Gong is probably his favorite.

EM drop target games seem to fit their skill level well right now. They seemed to really enjoy the "Clown game" when I had a Jumping Jack on the ground when I pulled it out to sell it. But the DMD games obviously provide a bit more rush to the senses but the speed seem to make them lose interest after only a couple of games. Even Eight Ball Deluxe is a bit too fast for their reflexes right now.

They probably put more overall time in on playing the 60 in 1 with Rally X being about the best suited for them right now. Although they seem to like to start the Donkey Kong series mostly because of the Gorilla!

Whereas they can play their Leap-pads or Mommy's iPad for hours if we let them.

My son in the image has been playing almost since he could speak. We were sitting at the table one night, and he suddenly turned to me and said PIH-BAH! I was trying to decipher what in the world he was saying as he got more and more agitated going "PIH-BAH, PIH BAH!!" Finally, I went, "Pinball?" and he nodded vigourously. He wanted to go downstairs to watch me play "Car tunnel pinball" (Viper Night Drivin'), so we did.

He now thinks that he owns my Mario Bros pinball machine, he's really good (last year, age 4, he legit got third place in the kids division at the Waun-A-Tournament), and he got a mini Teenage Mutant Ninja Turtles pinball machine, which he told me he'd bring to the Midwest Gaming Classic for others to play... if I paid him

I actually don't really encourage it either. The pins have been in a place that hasn't been easily accessible basically since he was born, so it requires a lot of clean up and stuff before he can play. I try to discourage, but he'll have none of it.

His most recent accomplishment - age 5, put his initials on BSD (!!) on his first play. With lightning flippers on it. 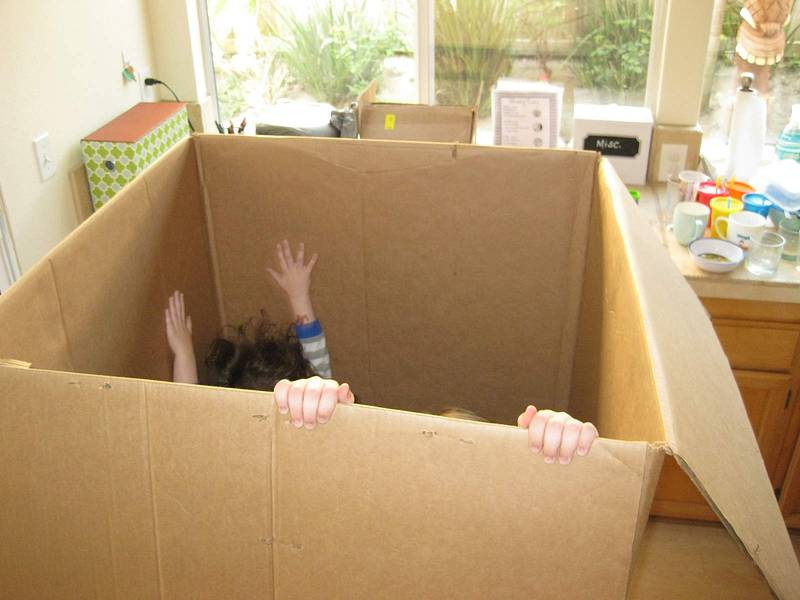 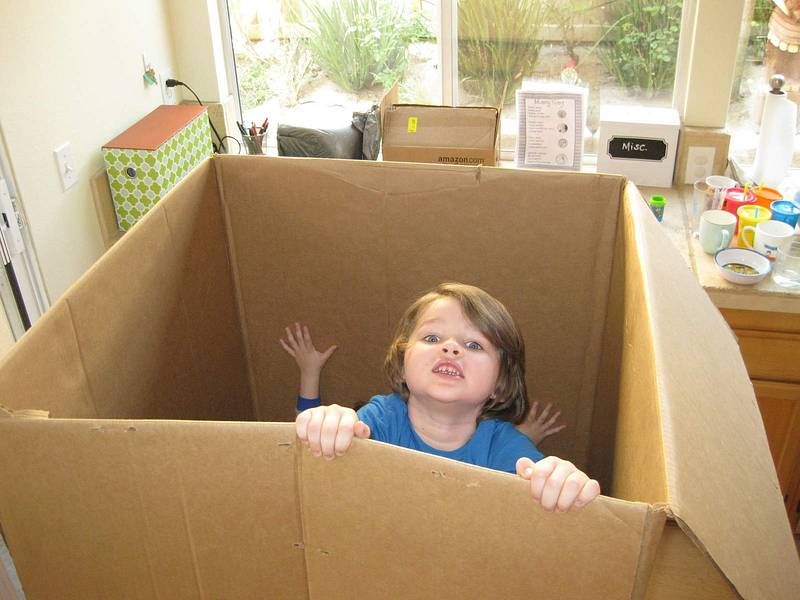 My GF's 8-year old grandson came down last week & ran to the pinball machine, so I started a game & proceeded to tell him how to play. He told me that he knows how to play & then proceeded to kick mine & my friends' asses.

My 21 month old boy loves the pinballs. He often asks me to play and finds it super exciting … for about 3 minutes.

He sits on a stool in front of the flippers and I let him plunge the balls. He's good at getting skill shots in Addams! But before long he just wants to get down and wreak havoc in the garage.

It will be great when we can reach both buttons and start having a proper go himself.

20 months old. Cant really reach both flippers but knows how to start a game, plunge the ball, and try to flip. 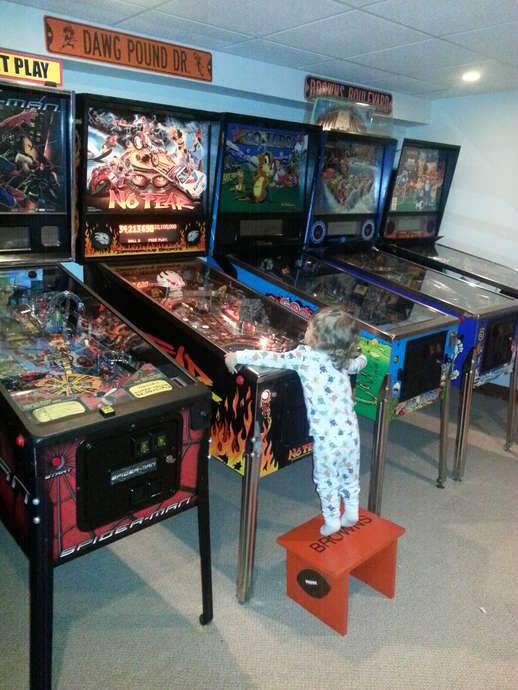 Haha Goatdan - I didn't know how to spell it until you did - "PIH-BAH!" My 2 year old loves it almost as much as my 12 year old. It sure does make it easier to find time to play when they want to play. I doubt it lasts forever but I'm enjoying it while it's here.

Nice to see the future in pinball.
My son is 18 now but has had no interest. For the last 9 or so years he has only played a handful of games.
When I had arcades on location he could not get enough of the Star Wars Trilogy though.
I guess to some Call of Duty is better.

I have been looking for a Star Wars Trilogy arcade game but the cabinet is too damn big. I want to buy one that the monitor is dead on and connect it to my living room plasma instead. I can throw all the rest of the guts of that machine in a pc cabinet just for safety.

Better believe it, hard to get him off playing once he starts. He's been flippin since about 20 months and is now 26 months. 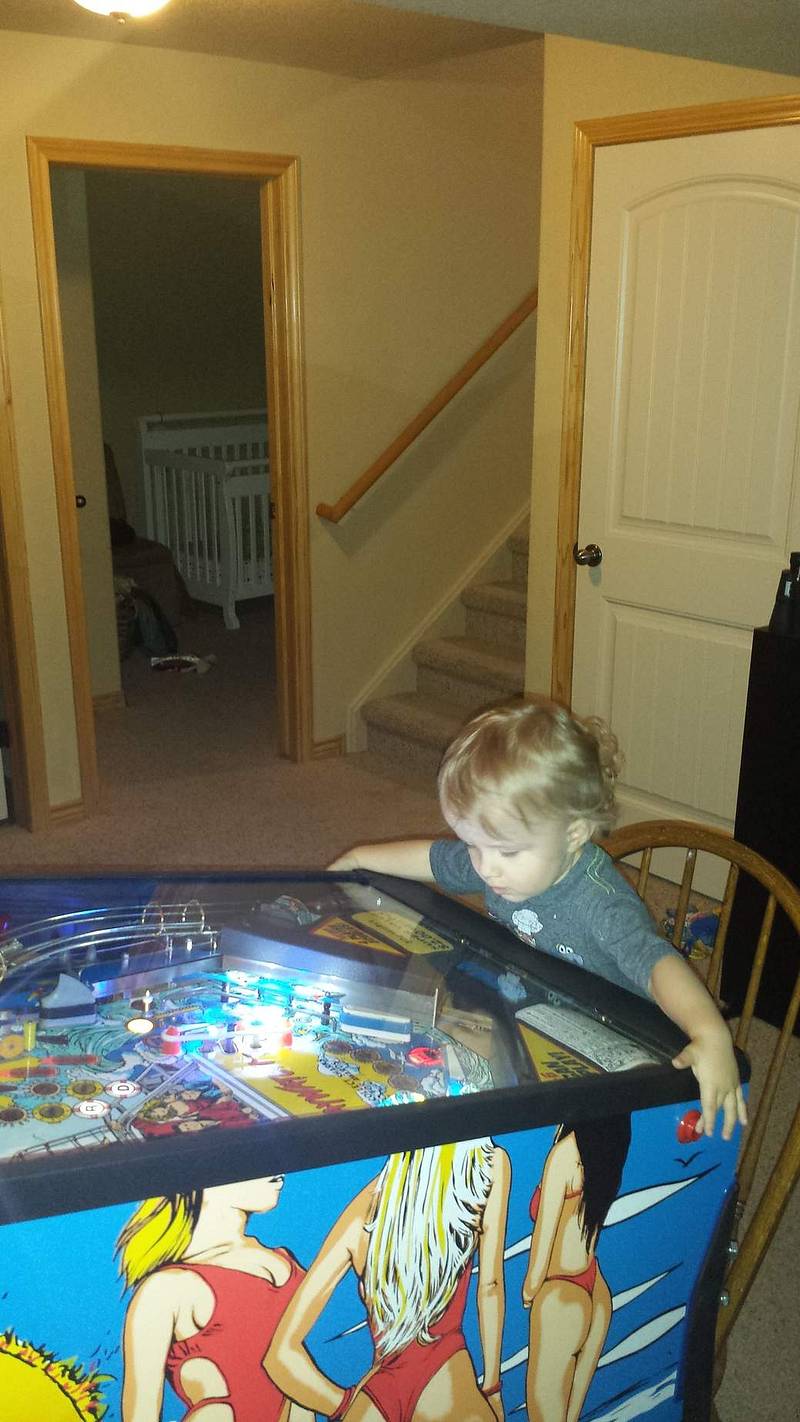 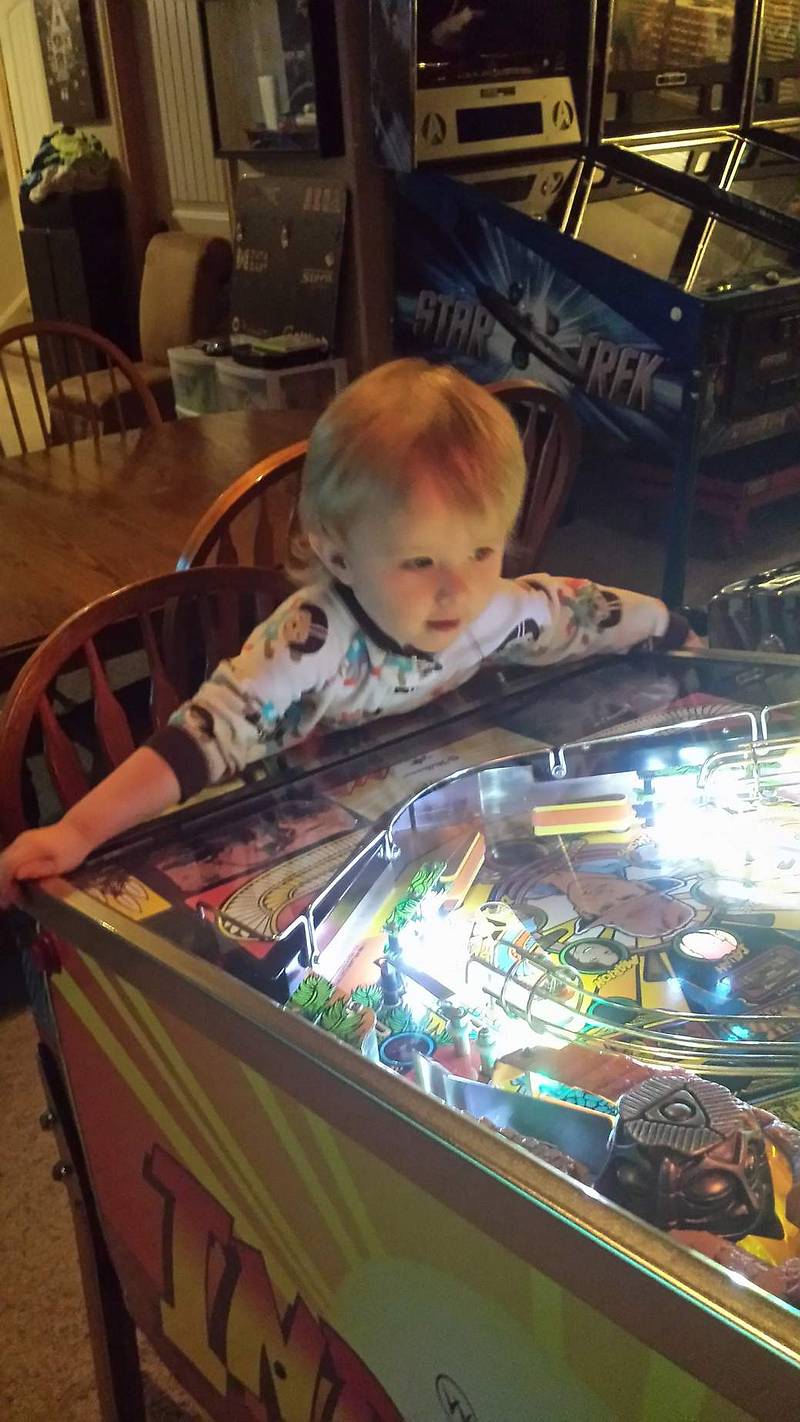 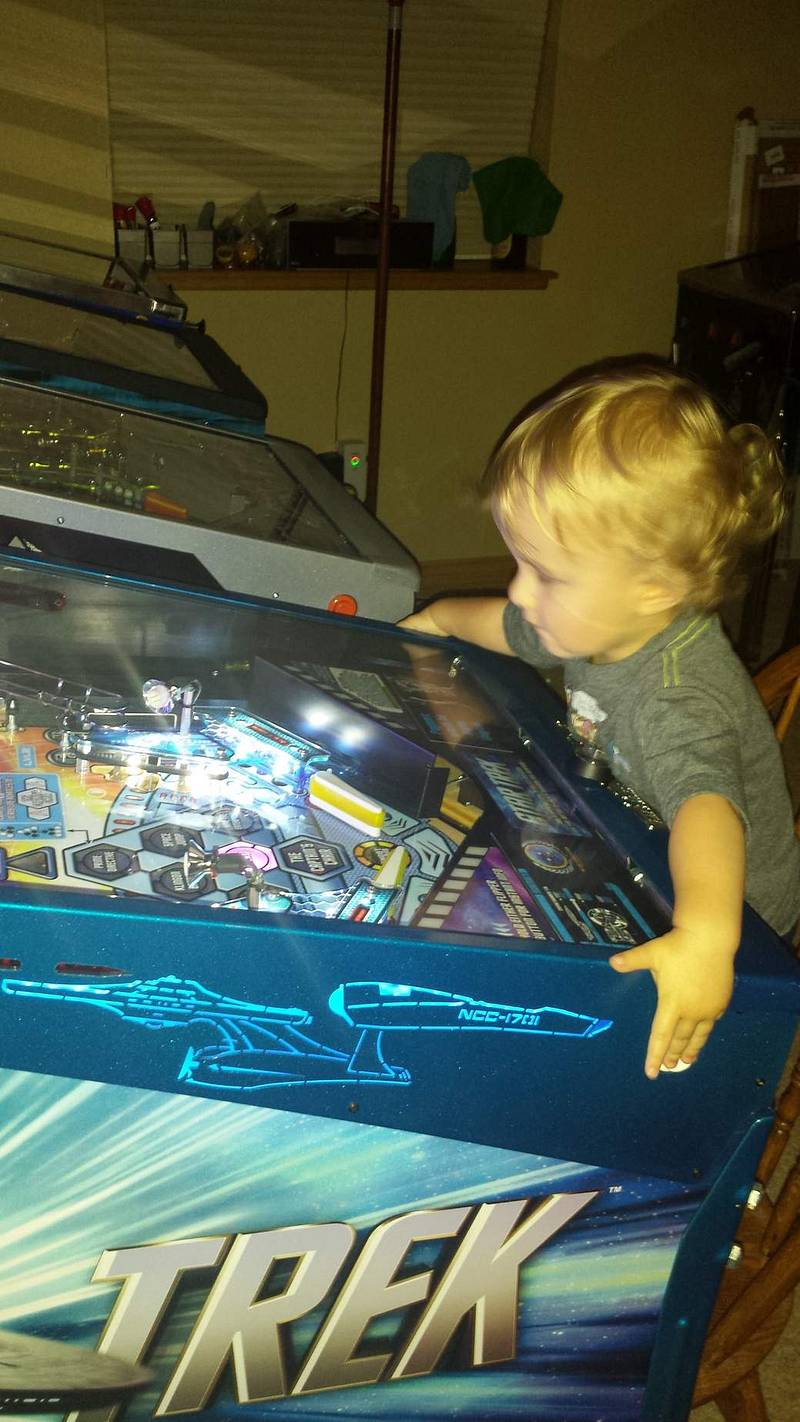 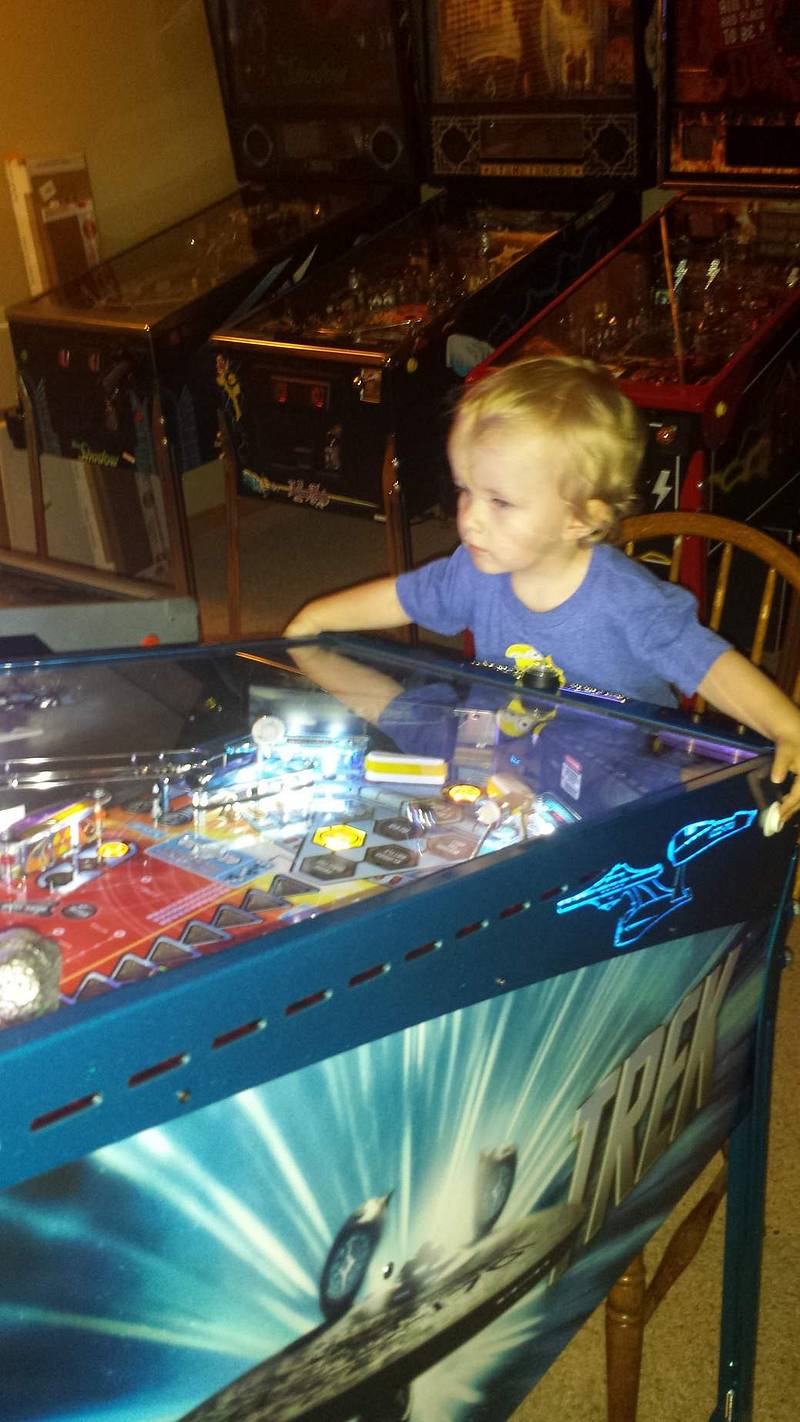