First, let me say this is not my idea - I've seen this mentioned a few times on here as a mod for Doctor Who, but I haven't see any really discussion on how to actually go about swapping out the factory TARDIS with a - in my opinion - nicer and more detailed one in the form of a donor USB TARDIS.

That said, I thought it may be helpful for others to see whats involved in the process and get an idea of whats involved. The overall process is not too difficult, but it's not a straight swap out. Basically you need to trim out the donor TARDIS to fit, solder on the wiring pigtail, and fabricate mounting points.

1) First, we need to break apart the donor USB box. There are 4 screws on the bottom and then it pops apart. The nice thing about the USB box is that the side panels actually come apart as well. There are two screws inside that attach two opposite panels, and the other two panels are held in by notches to the two screwed in ones.

The first thing I did was cut out the switch mechanism and speaker, leaving only the led in the roof. To get the speaker out, I used an xacto knife and carefully trimmed around the edges of the speaker to cut out the glue. I then glued in the remaining switch in the front door as here: 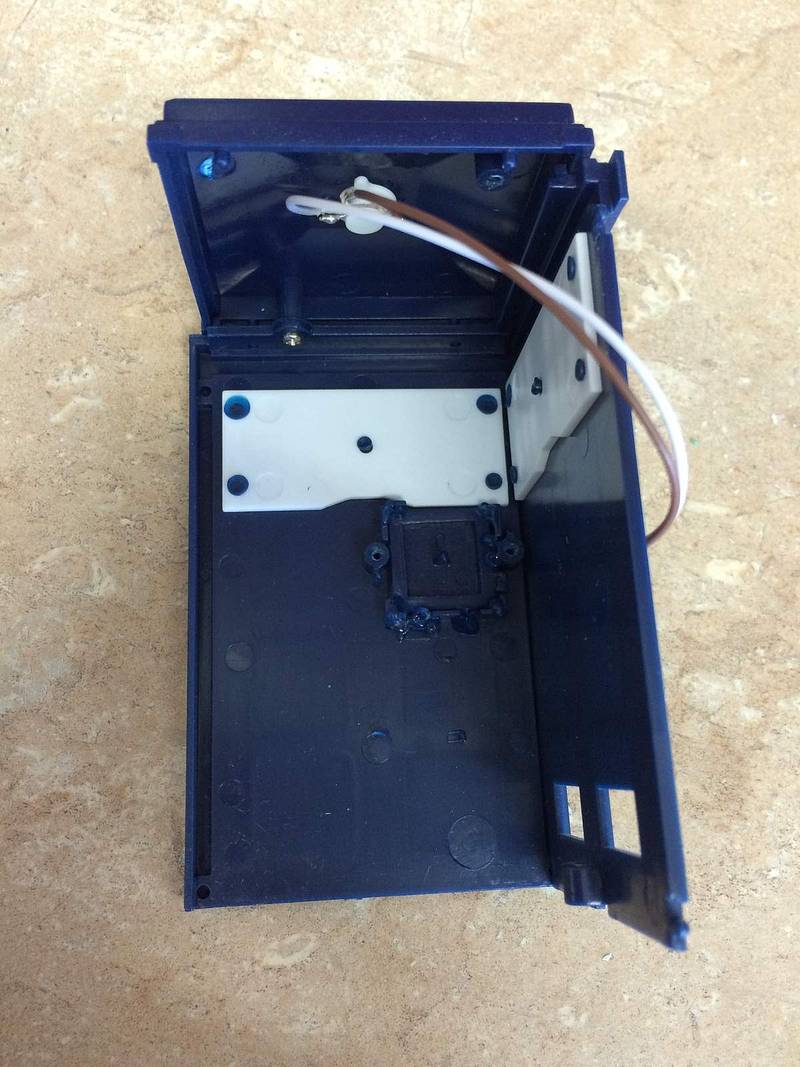 2) Next, I started the process the trimming the box panels to fit in the space on the play field. To get a general idea of what we need to do, here's the original TARDIS and the cutaway: 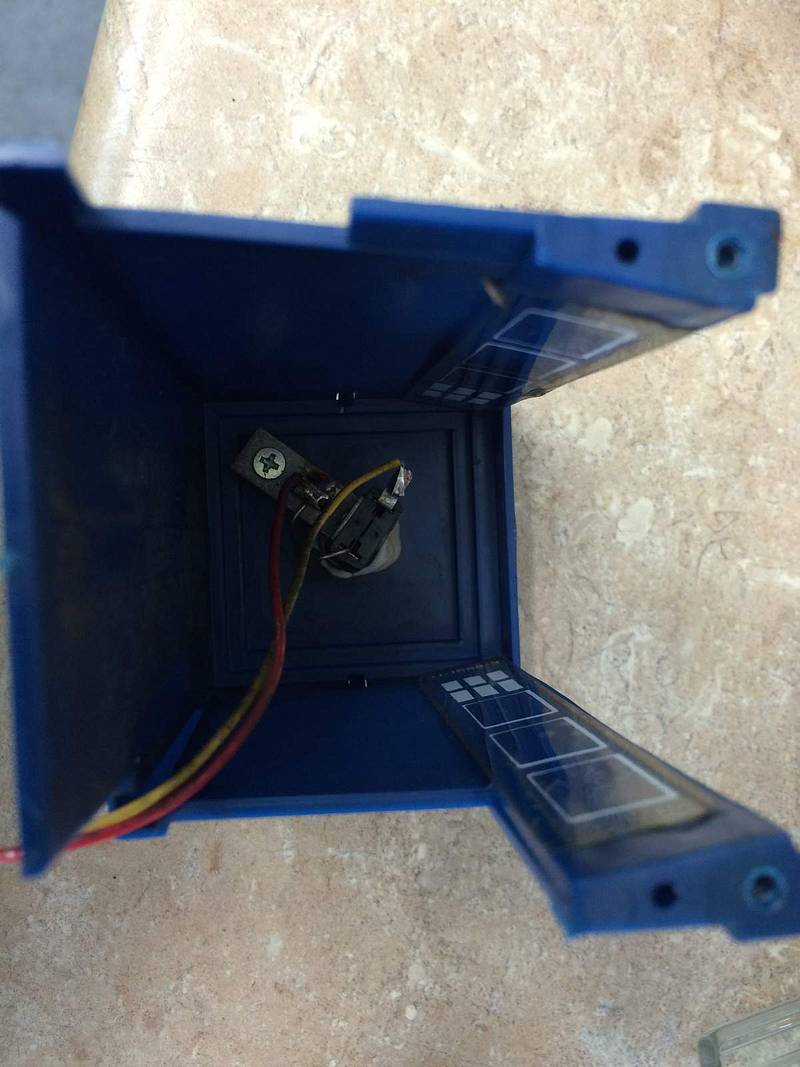 I started to trim out the back corner that is next to the side ramp. Note that the TARDIS actually sits on a slight angle, so that is why we only will be trimming a partial corner. What we need to do is take out about an 1 1/4 inch high piece. 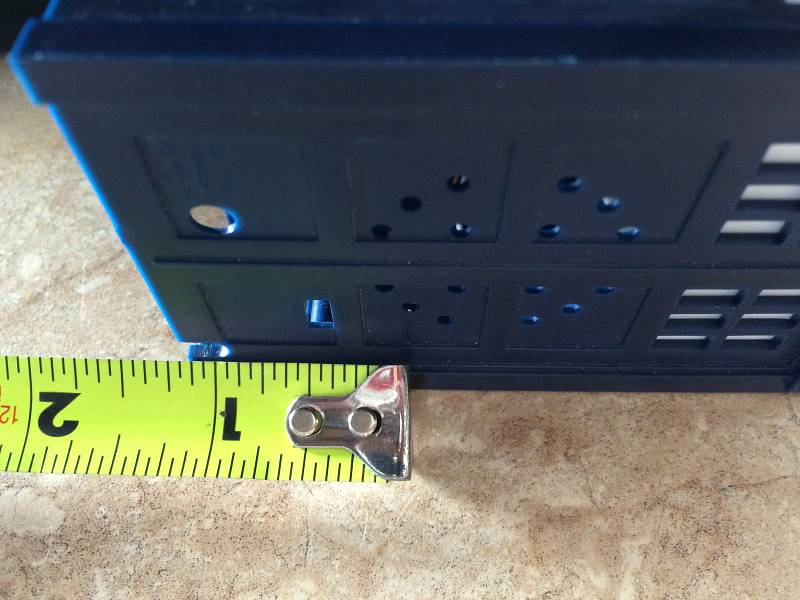 IMG_1525.jpg We also will need to notch out the back for the bend in the wire ramp. For the cuts, I used a large cutting wheel on a dremel tool to get a straight cut. This makes it easy to get long cuts, but the one bad thing is this will leave white marks on the cuts. To solve this, later on I used an old soldering iron and heated up the edges to sort of flame-polish the edges.

The final cuts on the back looks like this: 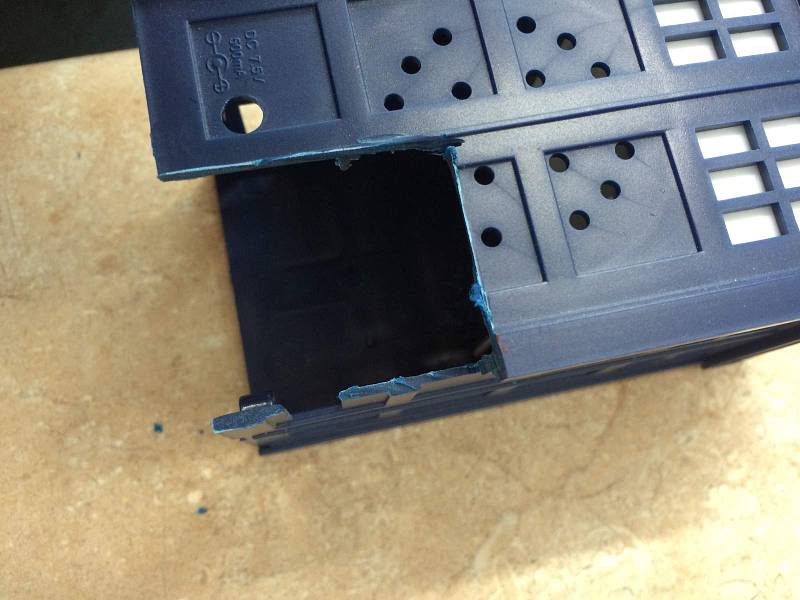 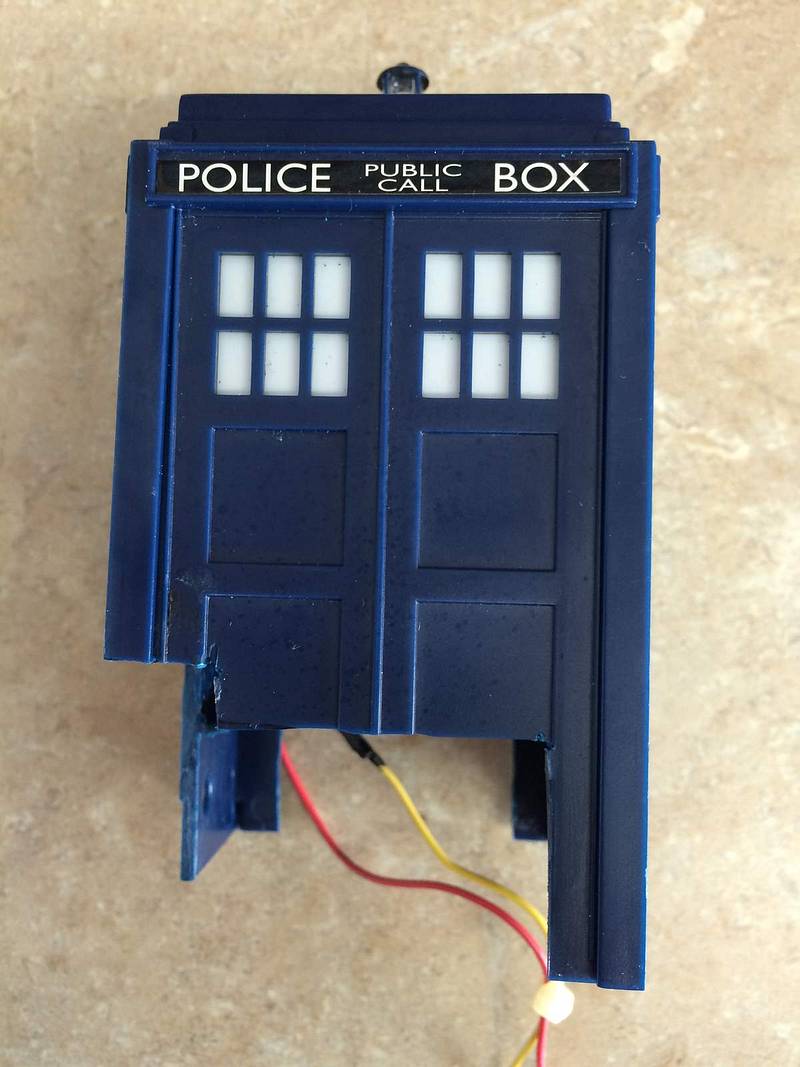 3) Now, on to the side that the wire ramp comes out of. Note that in the factory piece, they left the full panel open. I always though this looked cheap, and wanted to leave a bit more of the panel to give a stronger impression of the side of the TARDIS. To that end, I wanted trim away as little as possible. I measured using the wire ramp as a guide. This was the closest that I could trim, keeping some portion of the side windows and and leaving and arch. 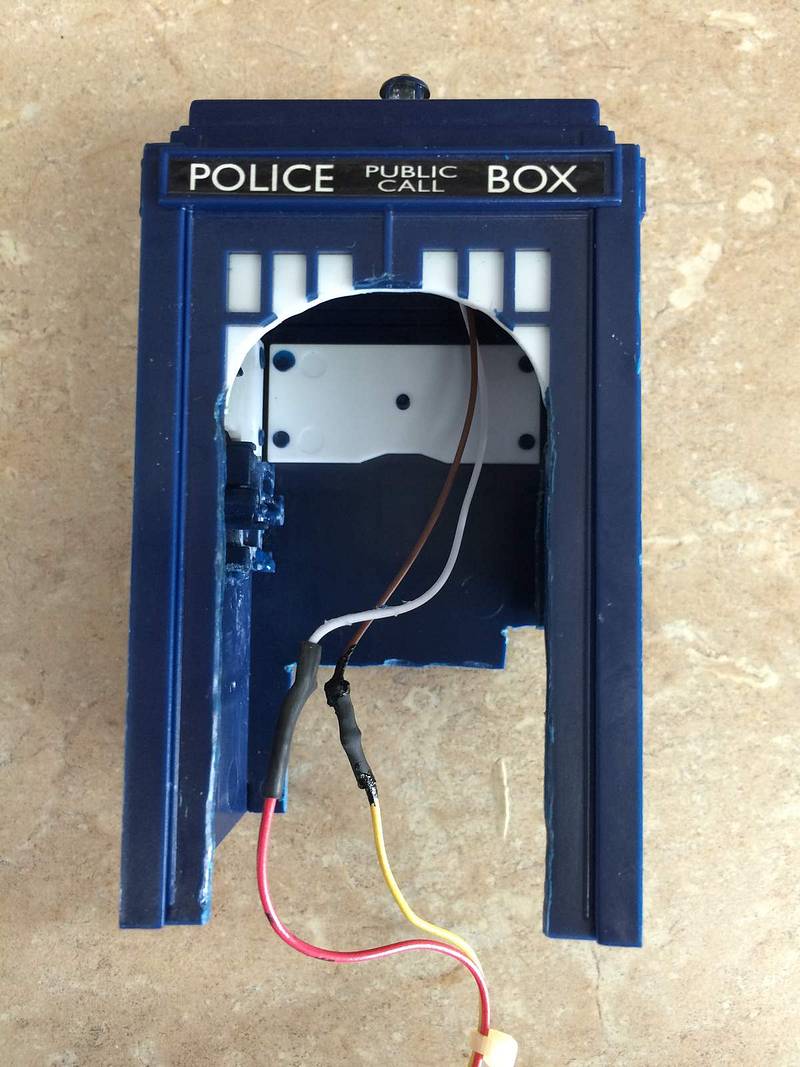 4) With regard to the LED, I cut off the plug from the original and soldered the old wires to the LED on the new TARDIS roof. For reference, yellow on the pigtail is brown on the USB box. One thing I learned was that the original wires in the USB TARDIS are small and lightly soldered, so while you're in there holding on the plug, I recommend removing and resoldering the USB wire leads connected to the LED light at the roof.

5) The last step is to fashion mounts for the new TARDIS. The original factory box is attached to the playfield by two metal brackets - you can see in the base of the factory box two screw holes. To get a point to screw into the new USB box, I cut two small pieces of white composite pvc board 1/4" thick by 3/4"x3/4" and glued each piece to the two corners at the bottom of the arch where there wire ramp runs. 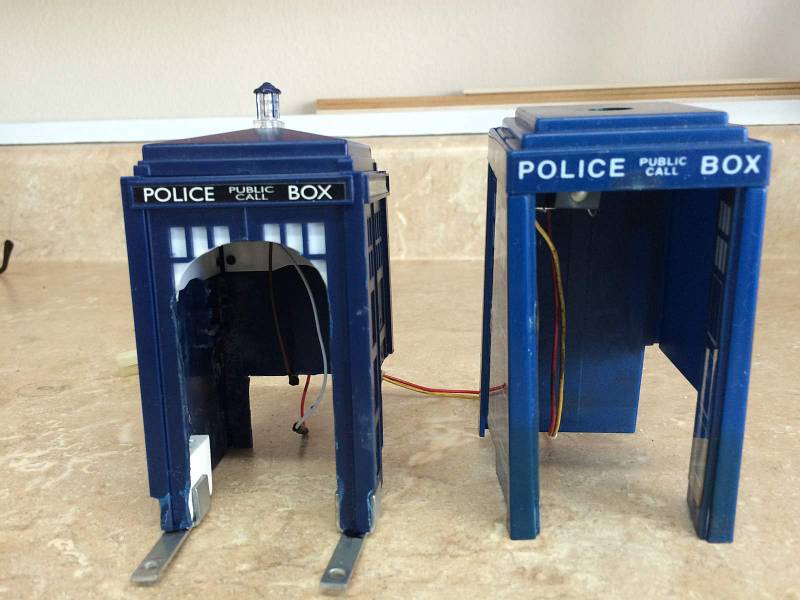 Here's some comparisons of the final project to the original. I really like the details in the new TARDIS, versus the stickers on the factory part: 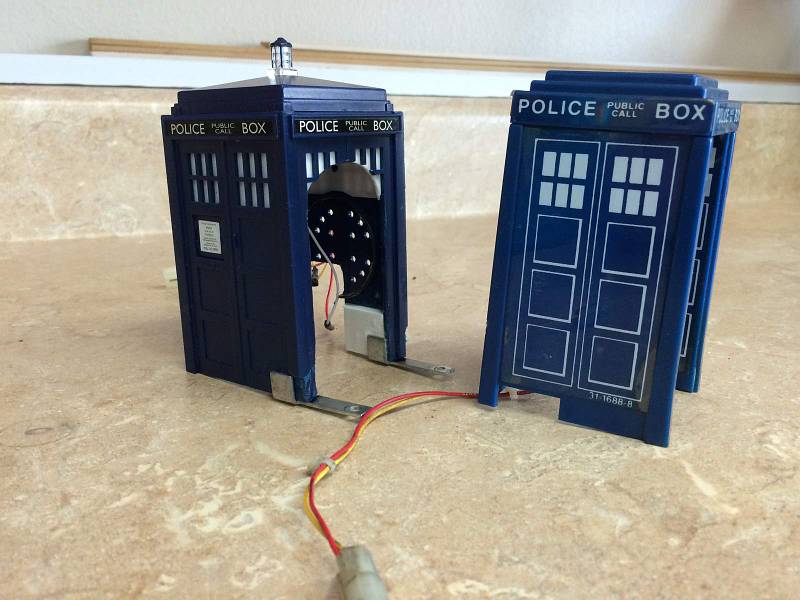 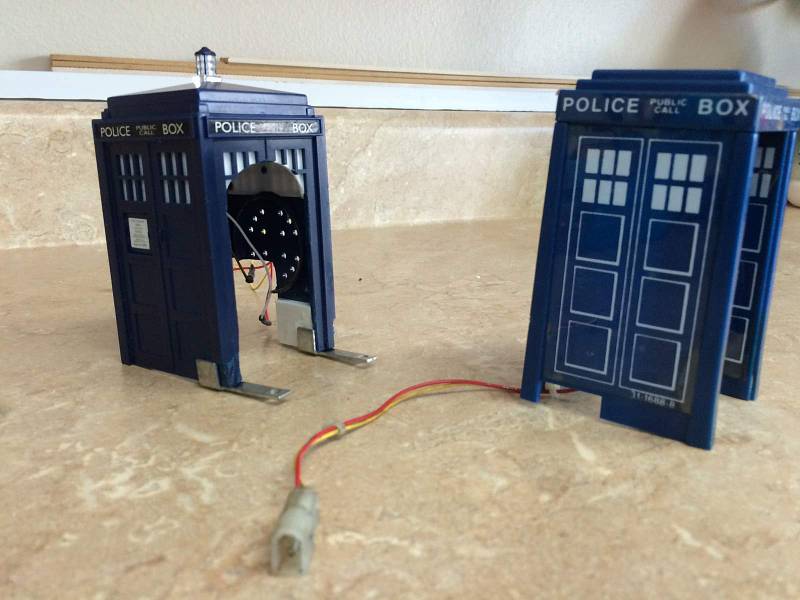 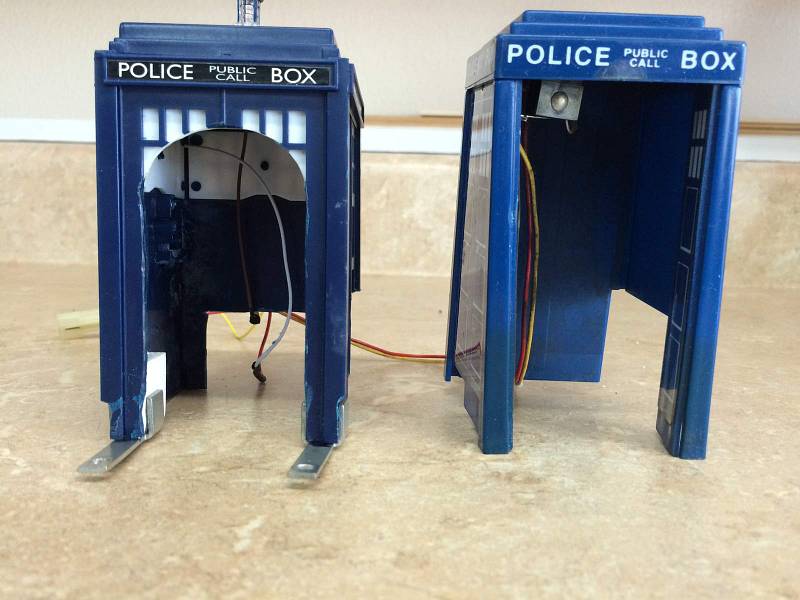 And thats it! Install and enjoy! 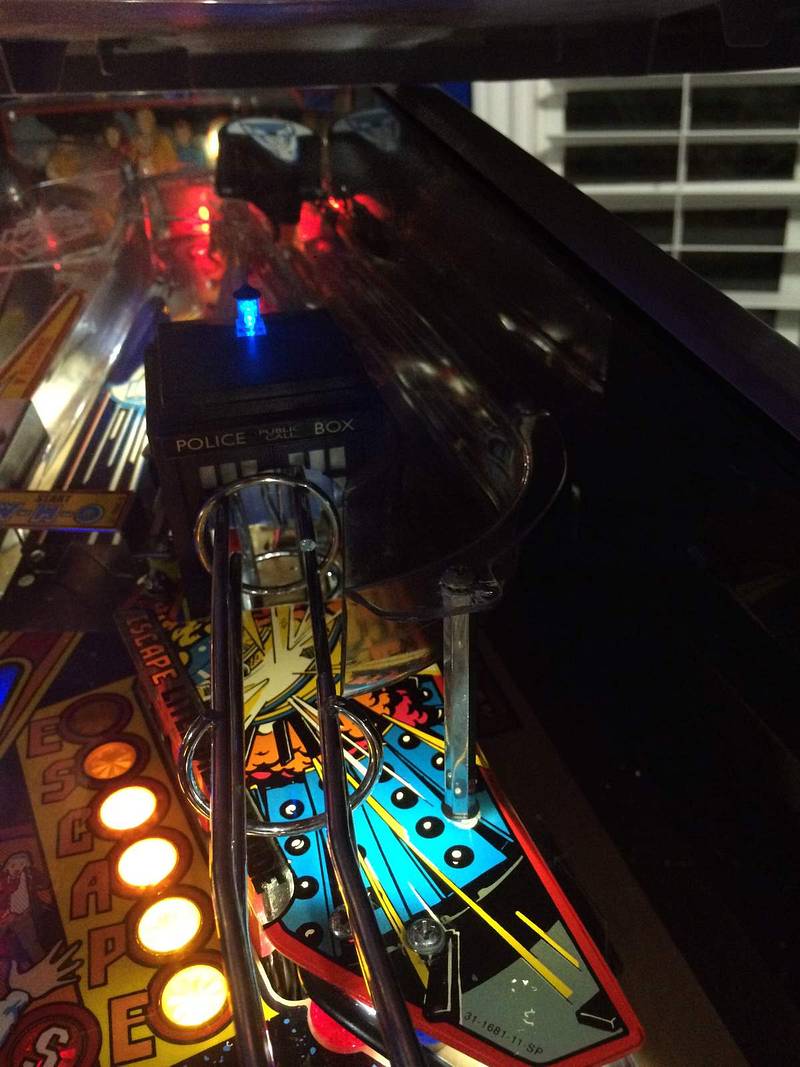 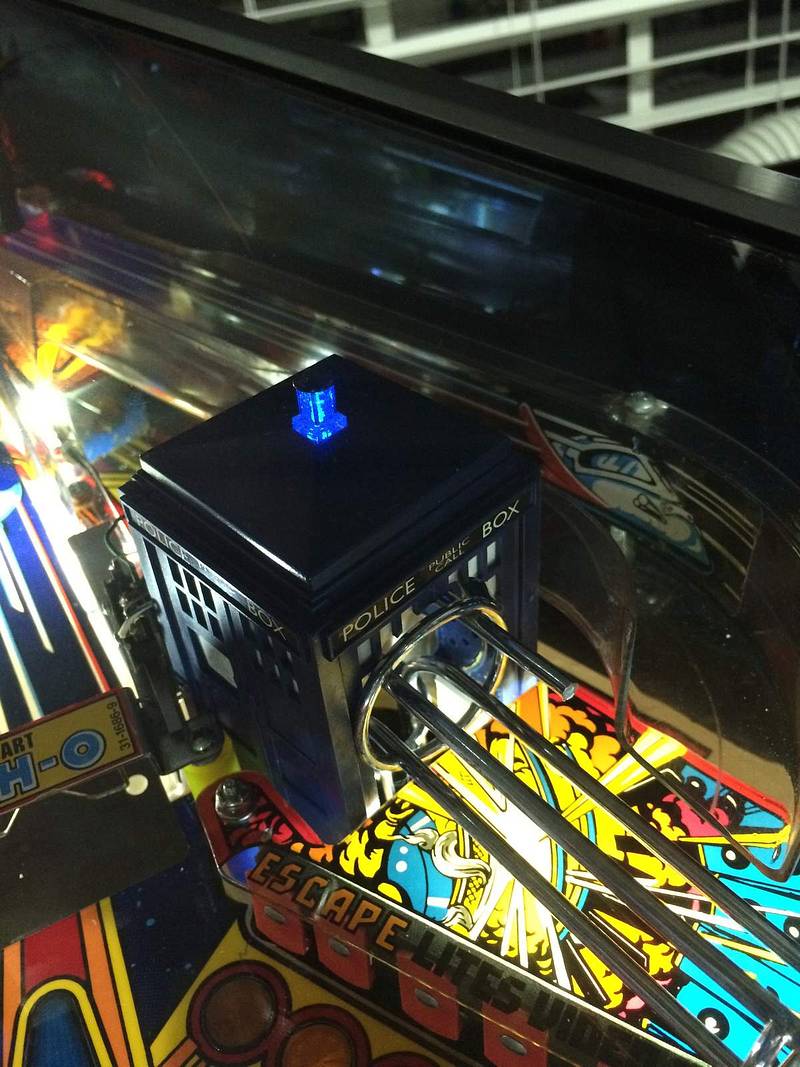 Sooo doing this. Thanks!

Thanks for the detailed instructions. I've had the USB Tardis for a while but haven't installed it yet. Maybe this will inspire me to actually do it!

Where do you get this USB one?

Hey Clnilsen, thanks for putting together these instructions! Very much appreciated. I followed them, but for some reason the light in my Tardis isn't lighting up. I think I have a slightly newer version of the USB hub than you do (see picture). Before modifying the USB Tardis, I verified that the light worked. I have also verified that I am getting electrical current all the way to the LED wires. I checked polarity too. Not sure what else to do. Any ideas guys? 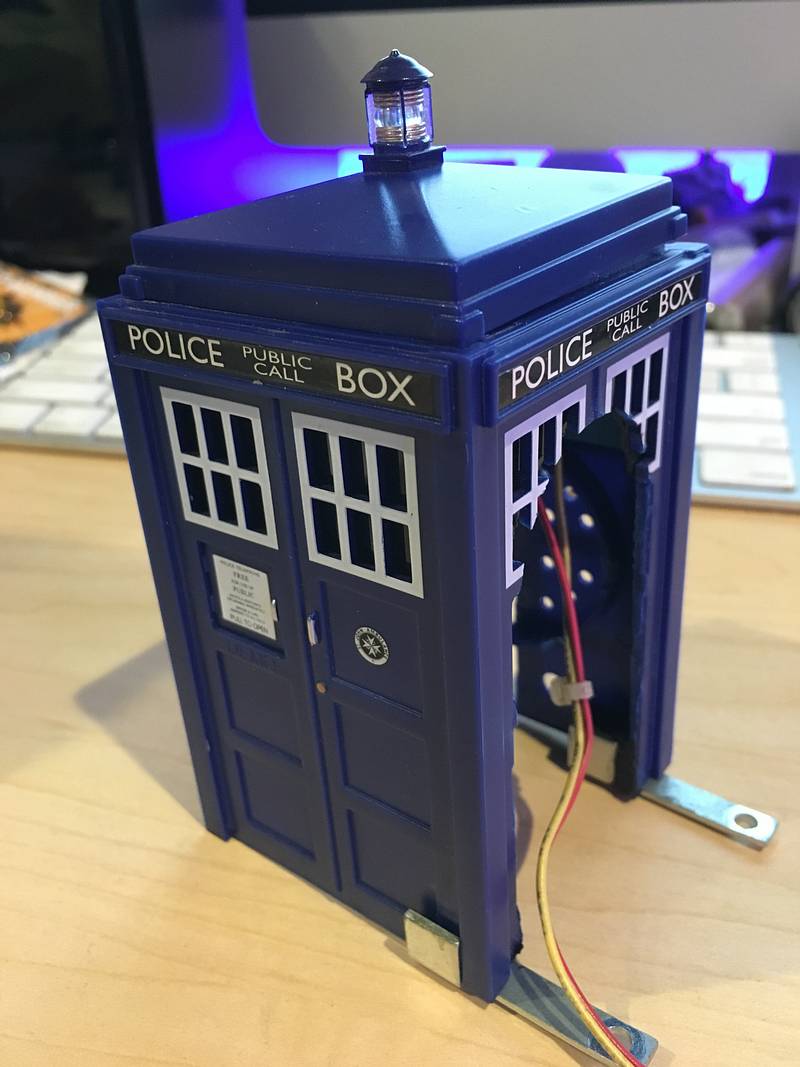 Where is the resistor in that circuit to the LED?

Perhaps the originator of the thread can provide some info if you PM him. Maybe there is a resistor that got removed when you prepped the USB Tardis for installation so a new resistor needs to be added in circuit with the LED? Might be some difference between your USB Tardis and the one the originator of the thread used, and if so he may be able to help you identify that.

Okay, thanks for the suggestion, I will PM him. I appreciate your ideas on this.

Hi all! Excited to see this thread alive again. I need to check mine, but I did not put in a resistor in line in mine, though catch86 is absolutely correct electrically. I'll try to check mine again this weekend to see if I missed it or what might be going on with mine to help out.

I thought you had to change the bulb over to a 12v, http://led-switch.com/3mm%20LED.htm

I'm working on modding one tonight. Having to stop because some glue needs to dry.

About the LED on top. I tried mine after adding the plug from the original TARDIS, and I had no light either. But I did have a blue LED in a 44 style case handy. I took it apart and attached it to the wires. That worked for me. I just need to glue it into place.

I have no pictures, but the light on the USB hub has a plastic clip inside that's very easy to remove. Then, you can take the light off the TARDIS to remove the original LED and set it back in place. Because of the size of the LED I'm going to replace it with, I'll have to glue the LED in place.

Ok, I found this in the "Doctor Who Owners Club.....Time Lords Welcome!". I thought I remembered something about this and I found:

Gave my Dr who some love Yesterday. I installed the USB Tardis. Here are some pics of the adventure. Sorry for the blurry picture. I didn't realize it did not turn out. Anyhow the pictures show what I had to do to get this installed. I also added a 470 ohm resistor to the mini LED that is in the Tardis. It took about 3 hours for me to complete this.

Great! Thanks Catch86! Much appreciated!

My son and I just finished doing our version. 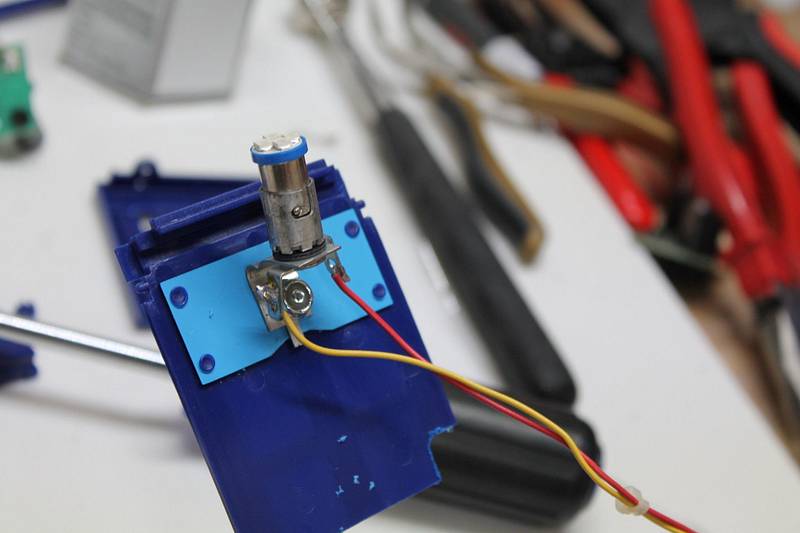 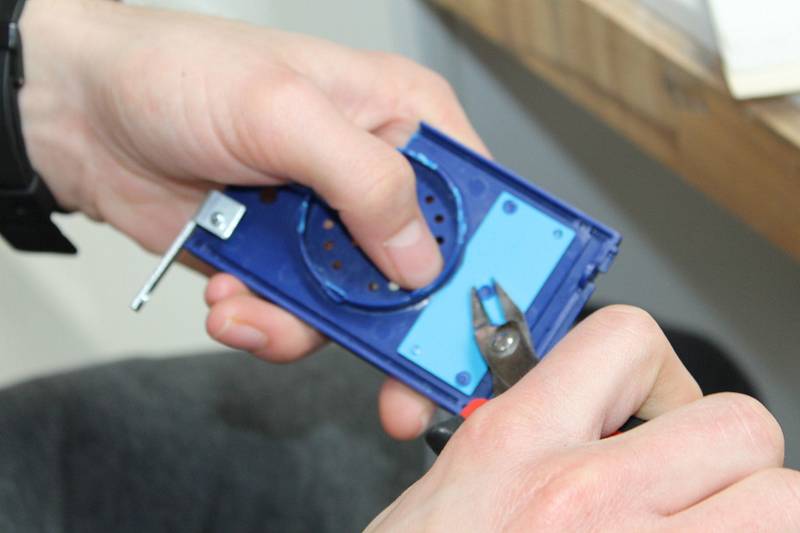 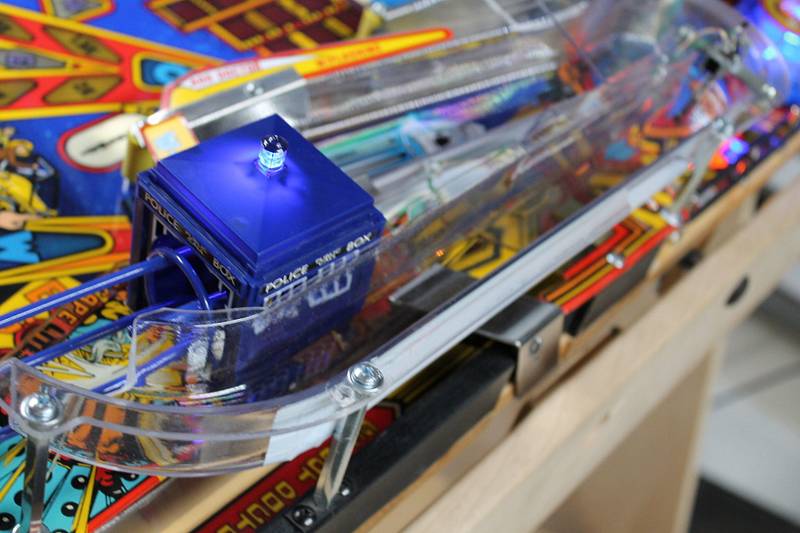 Nice job! Like the powder coated habitrail as well!