Do you restart your game after a bad 1st ball?

It’s your game do what you want.

I don't. Everyone has had that killer ball that seems to last forever. Besides I think it just makes it more challenging when you have a bad first ball.

"[bleep], what am I doing, I'm paying for this" -- from one of your location streams.

No way I can afford to do that . That would be like paying 3 dollars a game or in my case 6 dollars per minute .

On location recently: a fellow competitor and I found a (Stern) TMNT with a two player game, with ball 1 of player 1 having already been played/plunged. He takes player 2, I take player 1. I put up a new grand champion score with only two balls in play.

Crossing my fingers it wasn't the TMNT @ Einstein's in Richmond

Restarts are common in my gameroom. Especially when it comes to WOZ. 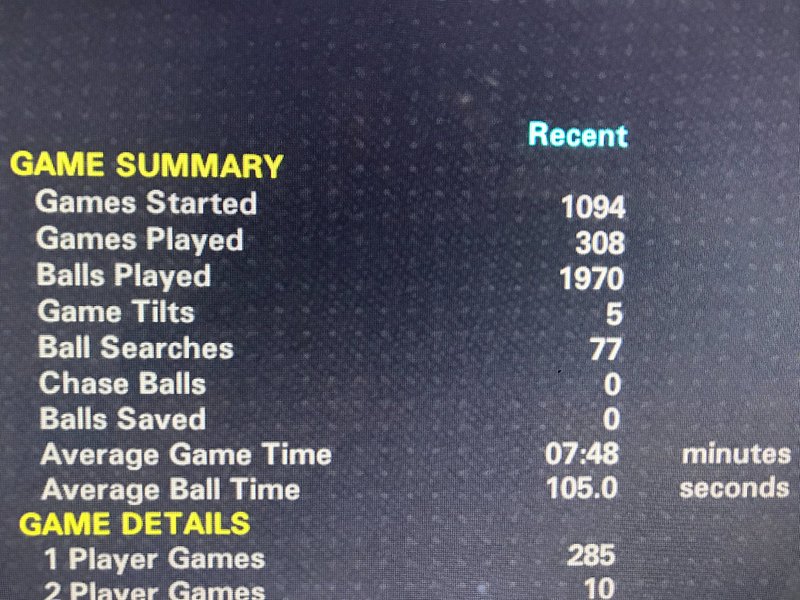 I would never restart.
Now I own TZ with L-3 code. I am considering it.

So many times I've had an awesome ball 1. Then drain drain drain. (Yep extra ball too). And I've put some of my best scores ever up on a great ball 3 run with bad first couple balls. I do not restart. Sometimes if it's a really bad game though I will just practice a specific shot or try a different strategy than i usually do.

Crossing my fingers it wasn't the TMNT @ Einstein's in Richmond

I wish it was. This was after (an attempt at) a tournament at Speedy's on Hempstead Road.

I look forward to eventually putting up a GC on TMNT at EinStein's in Richmond though. Great collection, but it's a bit of a drive.

Never...but definitely get discouraged when ball 1 drains quick. Every ball counts is my motto - always time for a comeback!!!

Here's an example of a really excellent game beginning with a disastrous ball 1 and a mediocre ball 2. It felt very satisfying kicking the machine's butt after those first two balls...

Yeah, but imagine how much higher your score would’ve been if you had started over after ball 2?

I wish it was. This was after (an attempt at) a tournament at Speedy's on Hempstead Road.
I look forward to eventually putting up a GC on TMNT at EinStein's in Richmond though. Great collection, but it's a bit of a drive.

I say that because I have/had grand champion on it. Not a monster score, only like 33.5 million, but a gentleman that goes by "SPC WES" has been destroying high scores there so I don't have grand champ on as many machines anymore. I need to get back over there.

I think that there is actually a fairly definitive answer tot the question of whether or not you should restart after a bad first ball. It depends almost entirely on why you are playing though. Note that I over analyze things, I'm one of those people. If you think I'm over analyzing this you are correct.

If you are playing for enjoyment then restarting is going to go against that. I find just letting it ride and playing is more fun, so for everyone saying just play and enjoy you're not wrong.

BUT, if you are playing to achieve your best possible score and want to do it in the least amount of time, restarting after a bad first ball is going to push the probability that you have a best game in your favor.

I'm going to start with the axiom that the odds of your best score coming primarily from a single ball are smaller than the odds that they came from a game where two or more balls went well. You'll have the occasional outlier where a single ball goes so well that you can drain the other two and still get GC, but I think odds are that more than 50% of the time your personal best comes from a good game where 2 or more balls went well.
(If you disagree with this I'd like to hear why because it's the linchpin of my argument.)

There's a similar thing in speed running. Those guys do tens of thousands of attempts at their games and even though they could make a PB or WR with a bad opening it's way more efficient to restart if they get too far behind their best pace.

The only caveat here is that you have to know the code and be good at the game already. If you haven't played the later modes and you keep restarting before you get there you'll never learn the game. Maximizing your score would only be something you do once you're pretty good at the game and just trying to push your number up.