I bought a bunch of these years ago, and no matter what machine I try to use them in, they do not work. They cause random coil locks. Sometimes the machine will freak out for no reason. Settings change to random things. Last night I had it lock on about 4 or 5 coils randomly. Would lock and hold for a couple of seconds, then release. Others were locked on right away. Almost burned up 5 coils. Luckily I was paying attention.

these are 100% useless for Zaccaria.

I bought a bunch of Brinks chips back in the day. They work great, but you must have both ram chips socketed, as it uses both spots. But they are reliable. Pins are very fragile and it's very hard to remove them without breaking off a pin.

Looks like Pinball solutions has a one socket option now. I have not used these yet. 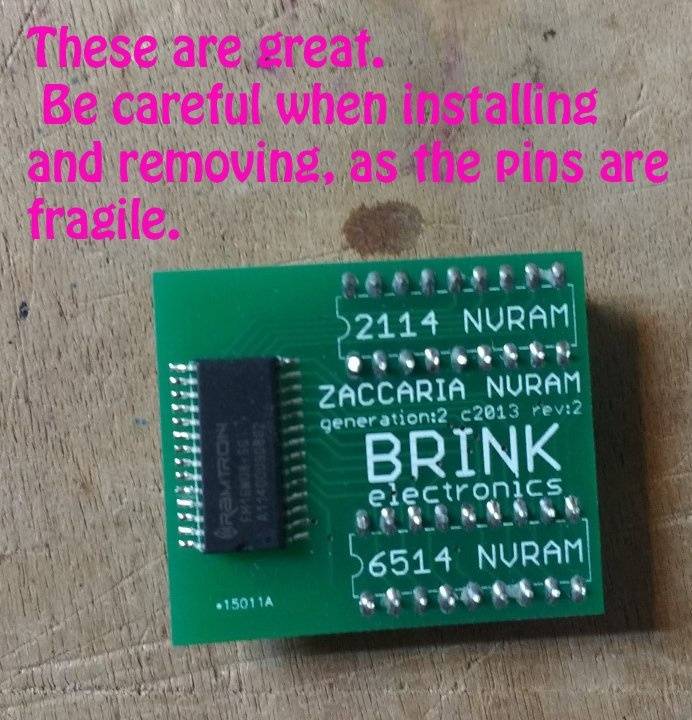 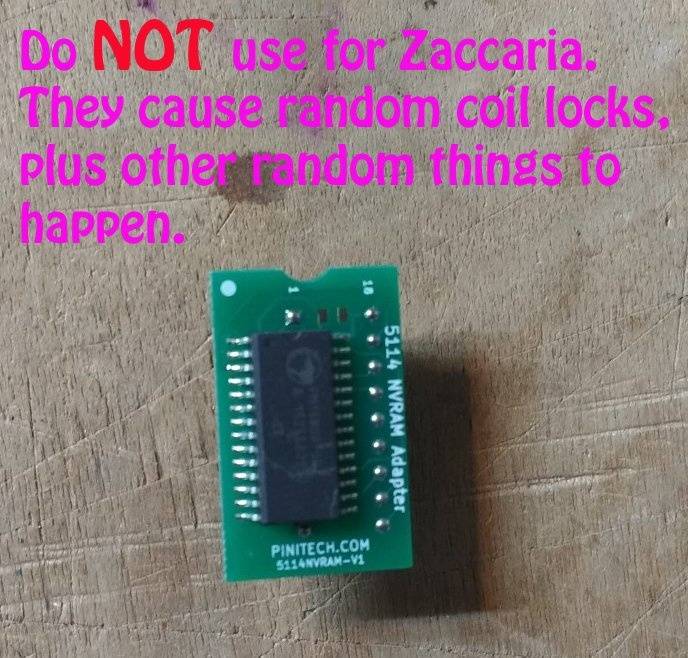 Sorry to hear about the issues! The Pinitech 5114 NVRAM is no longer listed as compatible with Zaccaria Gen2 as of 11 months ago when the first report of a possible incompatibility occurred in the Zaccaria thread linked below.

These modules were originally developed for use in arcade games & compatibility for Zaccaria Gen2 was based on what others had reported was working (ie. replace IC4 only since that's where the battery-backed data was stored). I had not looked at the MPU schematic in detail at the time, nor did I have a Zaccaria machine to test in. So it appears I was premature in listing it as compatible with Zaccaria Gen2's in that configuration without first-hand experience.

At this point, I'd actually recommend anyone wanting to upgrade their Zaccaria Gen2 game use a dual 5114 NVRAM Module.

On Zaccaria Gen2 machines, both RAMs at IC4 and IC5 are working together as a single unit. Specifically the data lines. The RAMs share address lines, write enable, chip enable, etc.. but data lines are separate. Bits are being written to both RAMs. It's usually not a good idea in computer systems to have mismatched speed or brand RAM being used when they're functioning as a single unit. Zaccaria Gen2 RAM circuit is similar to the Stern MPU-200 circuit in that it's using two RAMs to function as one, and anyone who's ever had mismatched or slow speed 5101's in a Stern MPU-200 game knows what kind of issues can happen.

Some additional response is in this thread:
https://pinside.com/pinball/forum/topic/zaccaria-pinball-owners-club-all-welcome/page/43#post-5889831

Despite others having mentioned not having experienced issues with other brand single 5114 NVRAM used *just* in the IC4 position, while leaving IC5 as an original 2114/6514, I wouldn't be surprised to hear about some issues at some point. But that's just my opinion & based on the technical aspects of how the RAM circuit is being used.

For anyone that bought a Pinitech 5114 NVRAM for use in your Zaccaria Gen2 game -- if you're experiencing issues, contact me via PM. I'll gather some info from you to match up your order & we can figure out return of the module(s) you have and get you a store credit or some type of refund.

yes, brinks setup is duel and uses both sockets. I have had 1 bad one that will not hold settings, but the rest I have installed have worked flawless. Have 3 that have broken pins, because they are very fragile and do not like to come back out once installed.

I missed that you retracted the Zaccaria compatibility. I did buy these quite awhile ago. Just finally got around to trying to use them.