NVRAM Help - Did I kill my machine trying to install NVRAM?

You're currently viewing posts by Pinsider pinlink.
Click here to go back to viewing the entire thread.

I'm so confused. I just installed NVRAM onto my system 11 game. Used 6116 just like the site says to. When I got it installed and turned the game on, the game started freaking out (Flahers were going off, F4 fuse on the driver board blows, and just flashes "U25 Ram Failure" on the display). so I quickly turned it off.

Did the NVRAM break my game? Why is the game now not working even with the original RAM re-installed? The game was working perfectly before installing the NVRAM. 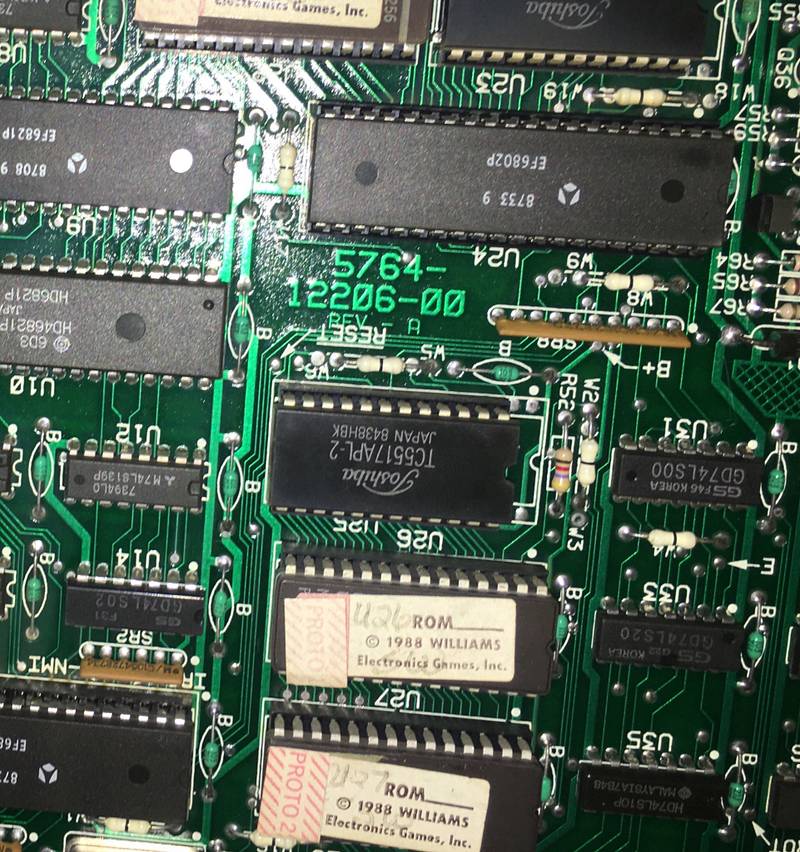 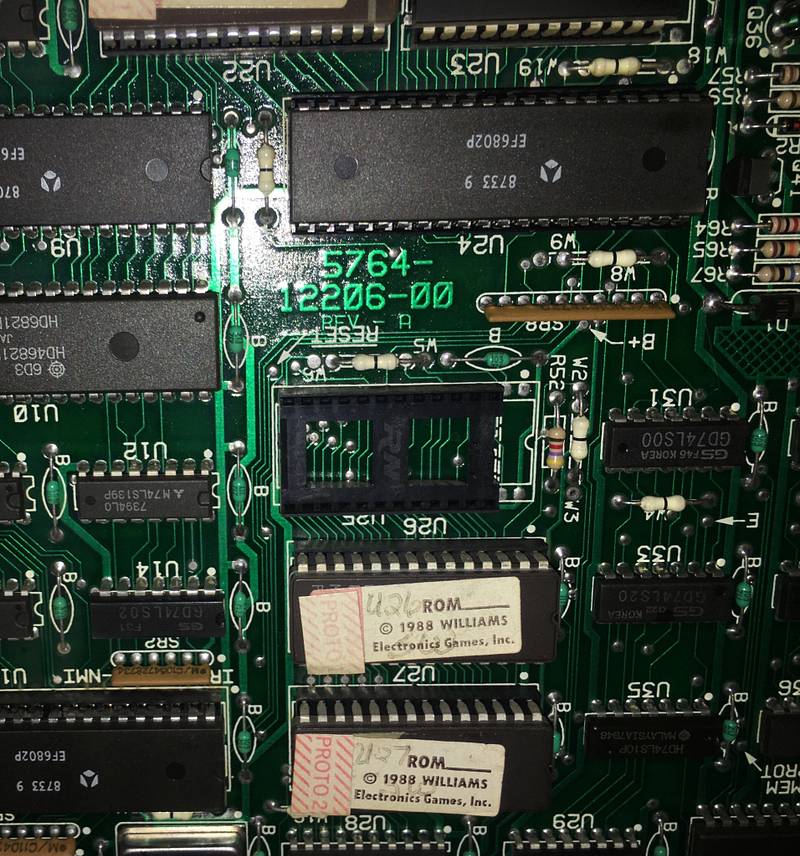 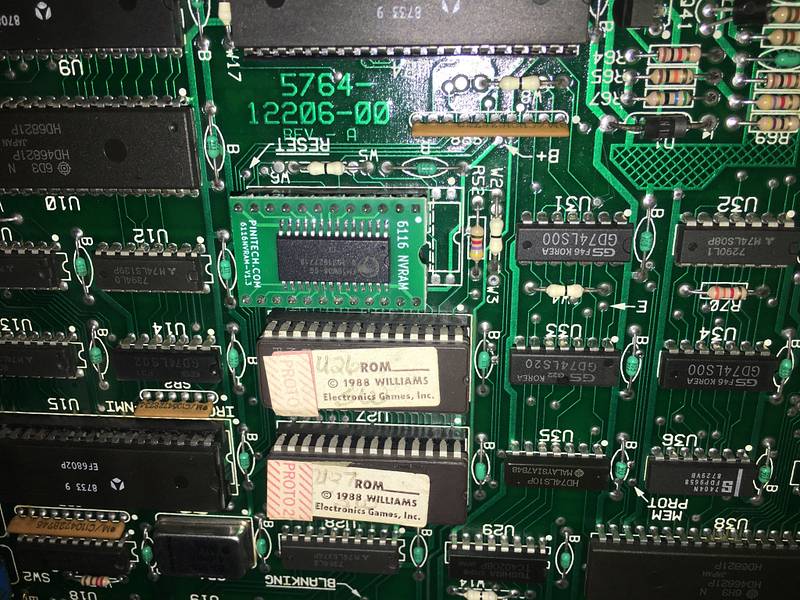 Was the socket already in place? And all you did was install the NVRAM?

Yes, and it was working before I installed the NVRAM. Only "issue" is that there was no battery holder so it would never hold settings/highscores/etc. and I had to go through the menu everytime I powered the game on. This is why I ordered the NVRAM.

So why did this break my game? Any ideas on what the solution is here? I mean, do I need to install a battery pack??? I really thought the NVRAM was going to fix all my issues, turns out it made them a lot worse, now I can't even play the game.

Any ideas on what to look at here? why installing NVRAM would cause the flashers to all flash quickly and cause F4 To blow? And shouldn't NVRAM fix any U25 RAM errors?

No. Sometimes there just happen to be coincidences.
U25 now may be a suspect failure now. Can you reseat your U26 and U27 ROMs?
Also, next to test 5volts on the MPU. Can you measure at TP2, which is between U21 and U21 sound ROMs on the right side.

Thanks. Ok reseated the roms but no change

Thanks for the help so far. The socket looks like it was installed perfectly but what you're saying makes sense I guess. I'm still not understanding why the NVRAM doesn't work in the game. I guess it could be the socket...

Now I'm not sure which ram to install once I replace the socket. The NVRAM worries me that the same thing will happen again. Here is a pic of the current socket 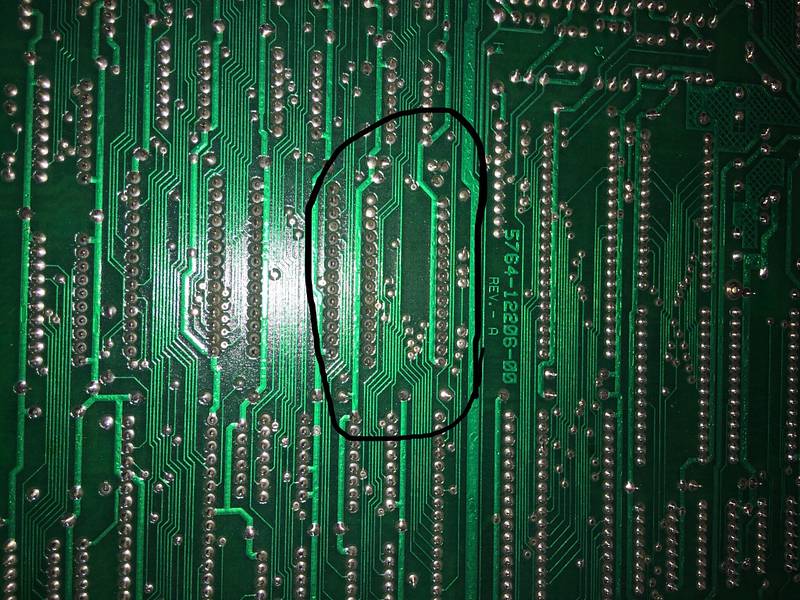 Pinwiki claims that surface mount nvram (of which the pinitech version definitely is... pretty obviously!) doesn't have issues with diode D1 causing too much voltage drop for the nvram to 'unlock'. You can put the NVram back in and jumper around diode D1 temporarily and see if it fixes the nvram issue.

Hmm, I see that now on pinwiki:

"It has been documented that some variants of DIP NVRAM may need to have diode D1 replaced with a jumper or jumped around the diode, in order for the game to boot successfully. D1, a 1n5817 diode, has a very low forward voltage drop (about 0.2 volts) vs. the normal 0.4-0.6 volts most other diodes have. If replacing U25 with the memory RAM, some memory RAM will not unlock and allow writes until the voltage is 4.8 volts or so. The 1n5817 D1 diode is just enough to prevent some memory RAMs from allowing writes. To solve this, solder a jumper wire around the D1 terminals, or remove D1 entirely and replace with a jumper. Surface mounted NVRAM on an adapter board is not susceptible to this problem."

Perhaps I should try this before replacing the socket..?

You can test this by checking continuity from the back side of the board U25 pin 1 solder connection to the pin 1 on the RAM/NVRAM (of whichever is installed), then pin 2, etc. This will show whether each pin is making connection in the IC socket.

Nice! Ok, I just did this test and can confirm there is continuity from the NVRAM pins to the back side of the board solder points....so... The socket is good I think.

ok guys, I think I may be on to something here (at least I hope so).

If you look at where the U25 socket is installed there are 7 solder points underneath where the RAM sits. It appears that one of these solder points (indicated by the red arrow in pic below), may have a broken trace. 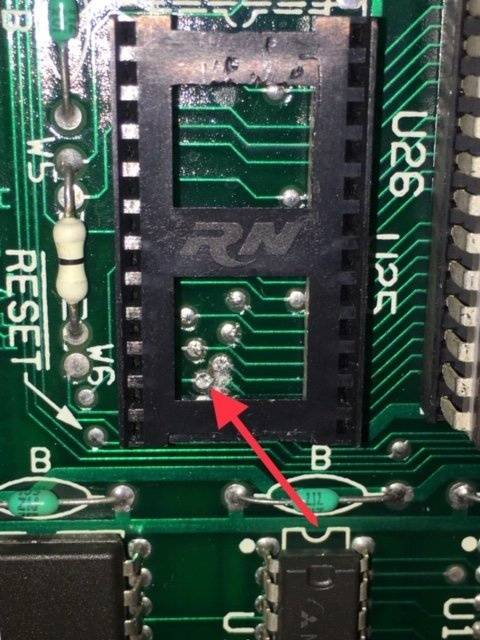 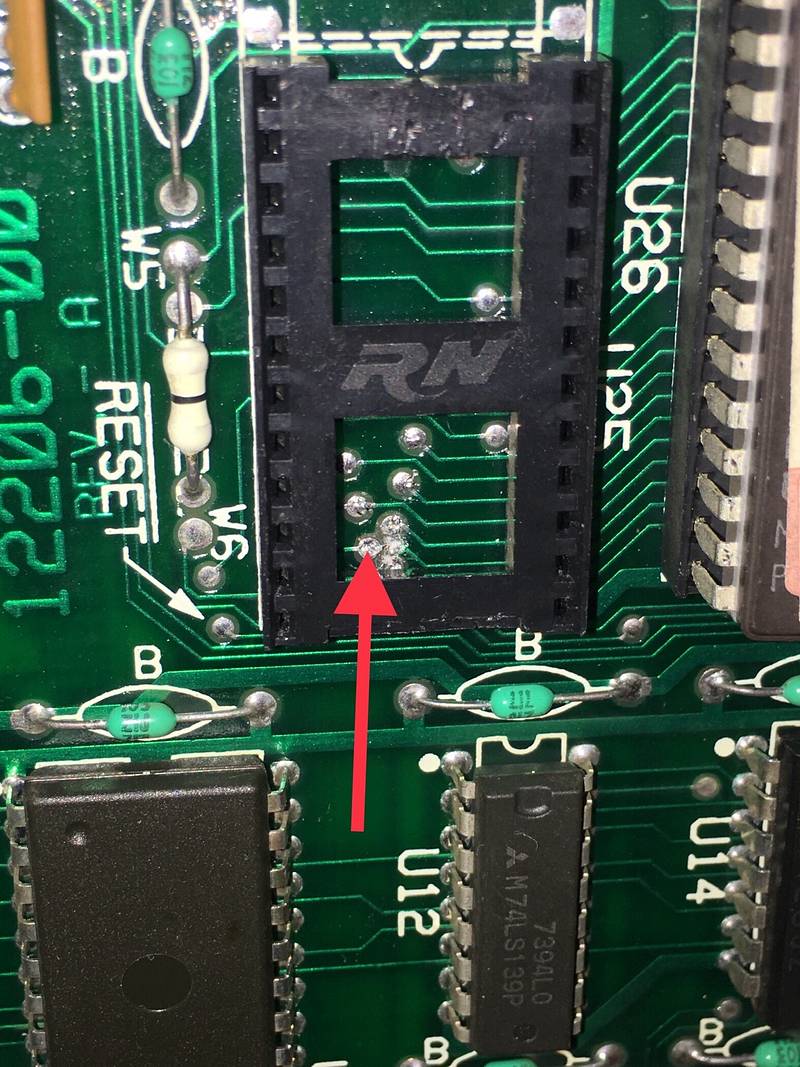 Can someone please tell me if there should be continuity between these two points in the picture? If so, Could I just add a jumper to these points (indicated in blue)? 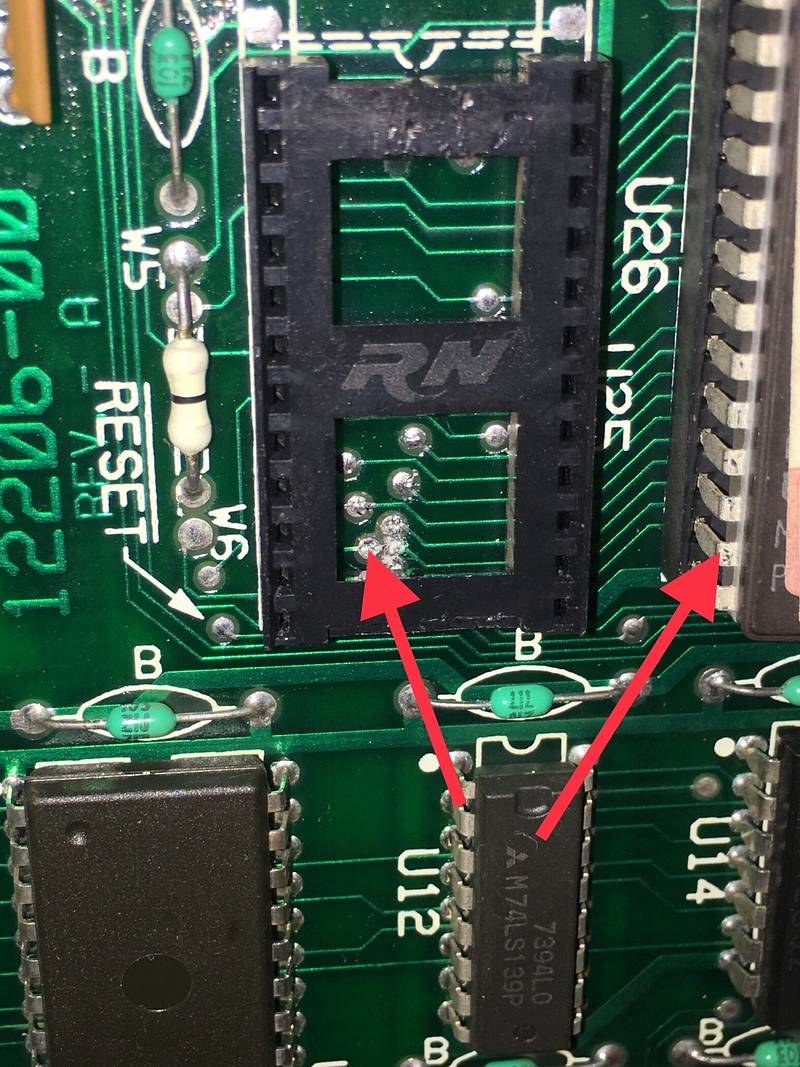 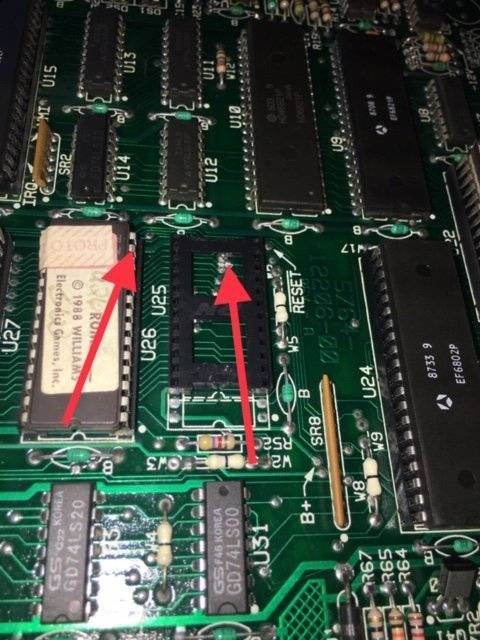 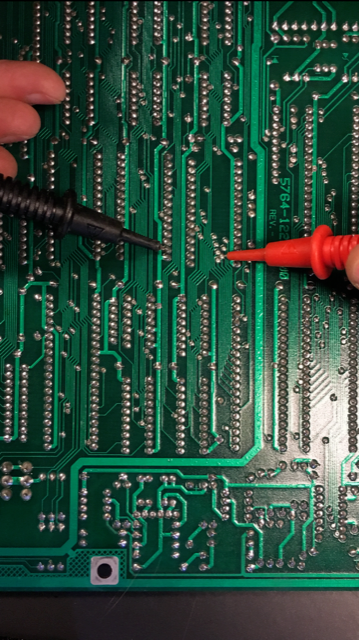 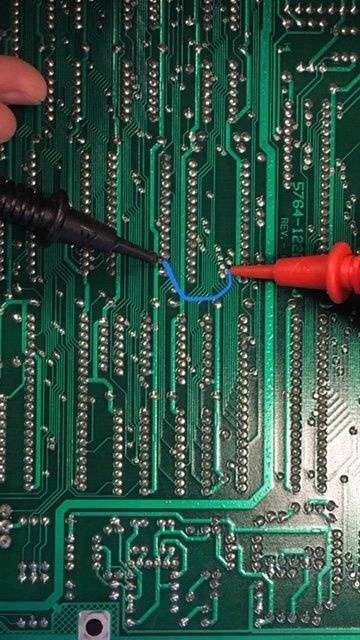 Ok I tested for continuity between these two chips/legs and these are my results. Blue is continuity, red is none. So that has to be my problem right? Just want to confirm before I add a jumper and put it back in the game to test. 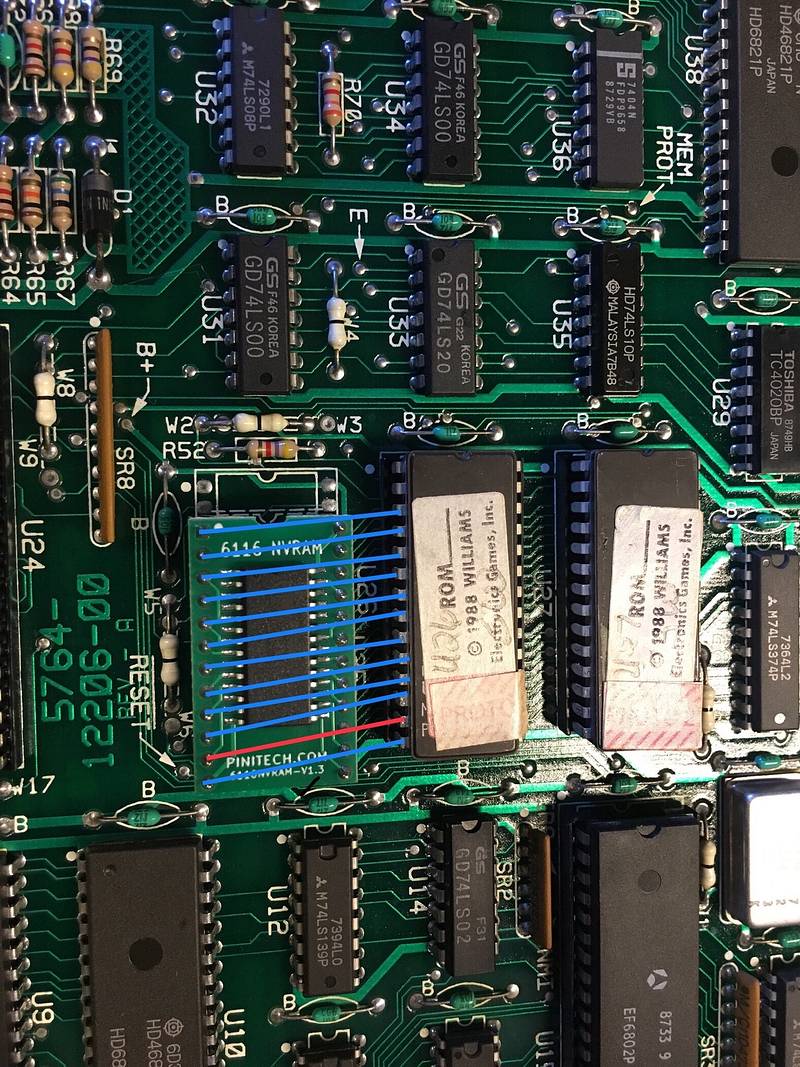 FIXED! Thanks everyone for your help.

You're currently viewing posts by Pinsider pinlink.
Click here to go back to viewing the entire thread.