Dialed In Owners and Fans Club

23 key posts have been marked in this topic, showing the first 10 items.

Post #1151 Adjusting the kickback Posted by pinstadium (3 years ago)

Post #8154 This is a dialed in club thread, everyone please stay on topic and take any bickering to PM. Friendly reminder. Posted by kcZ (2 years ago)

Show all 23 key posts in the index 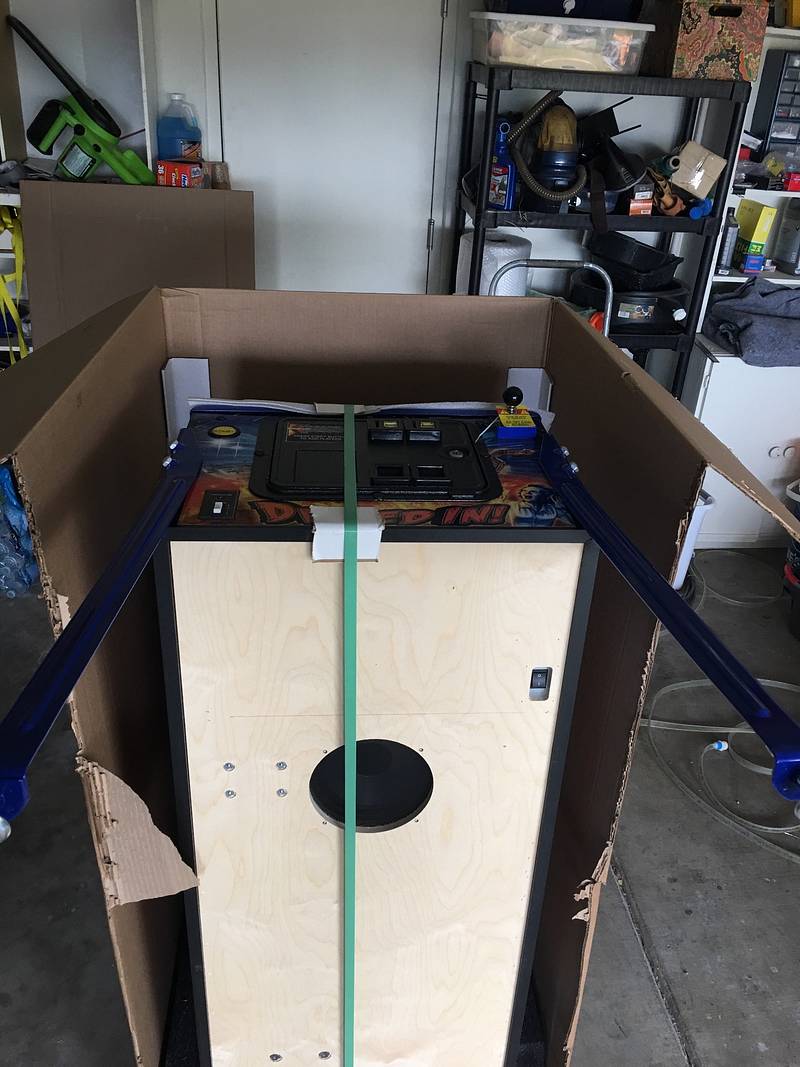 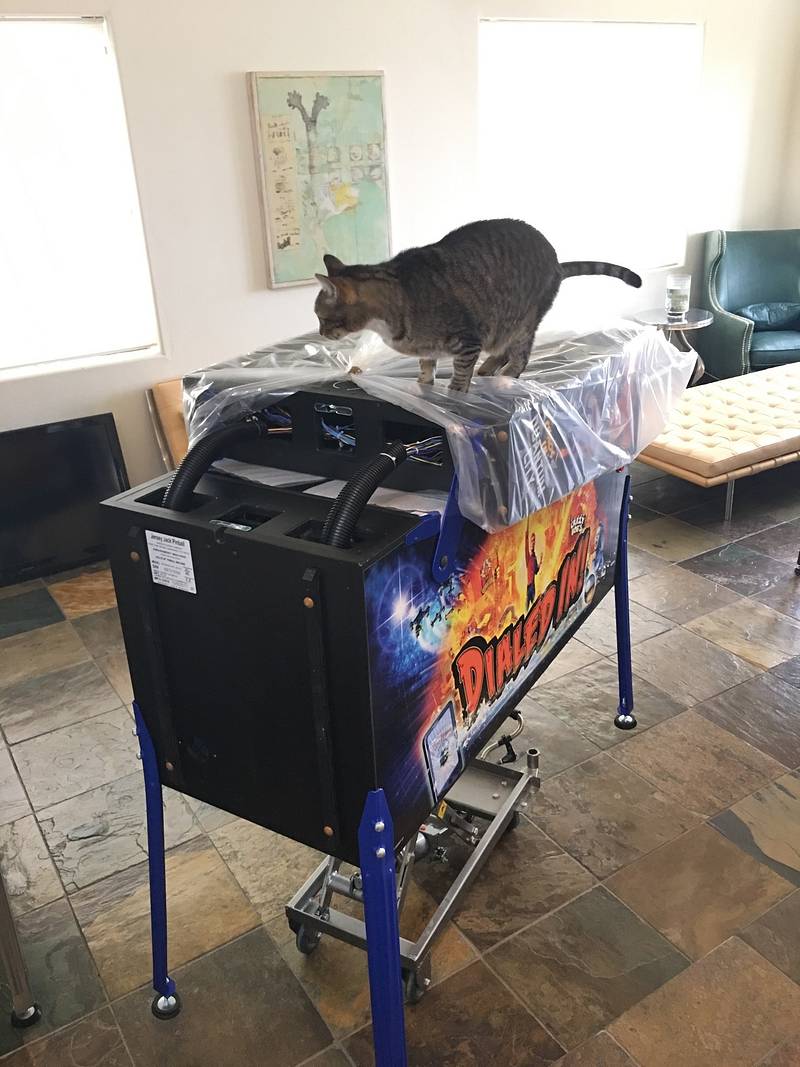 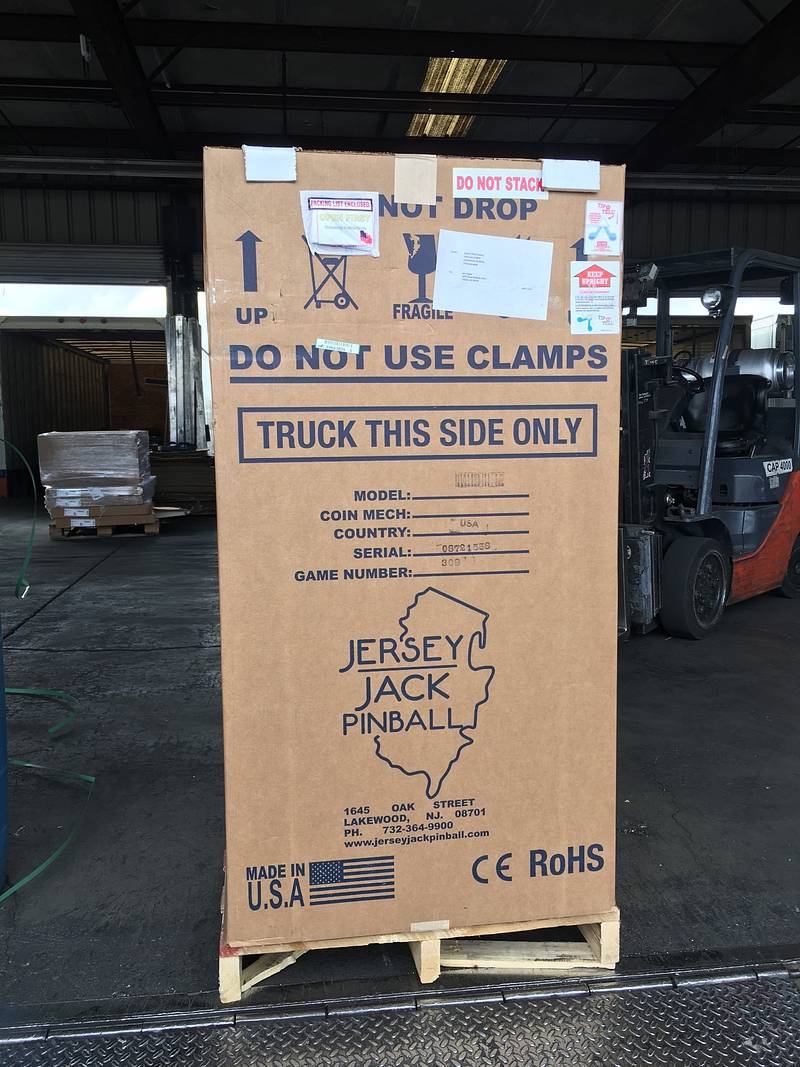 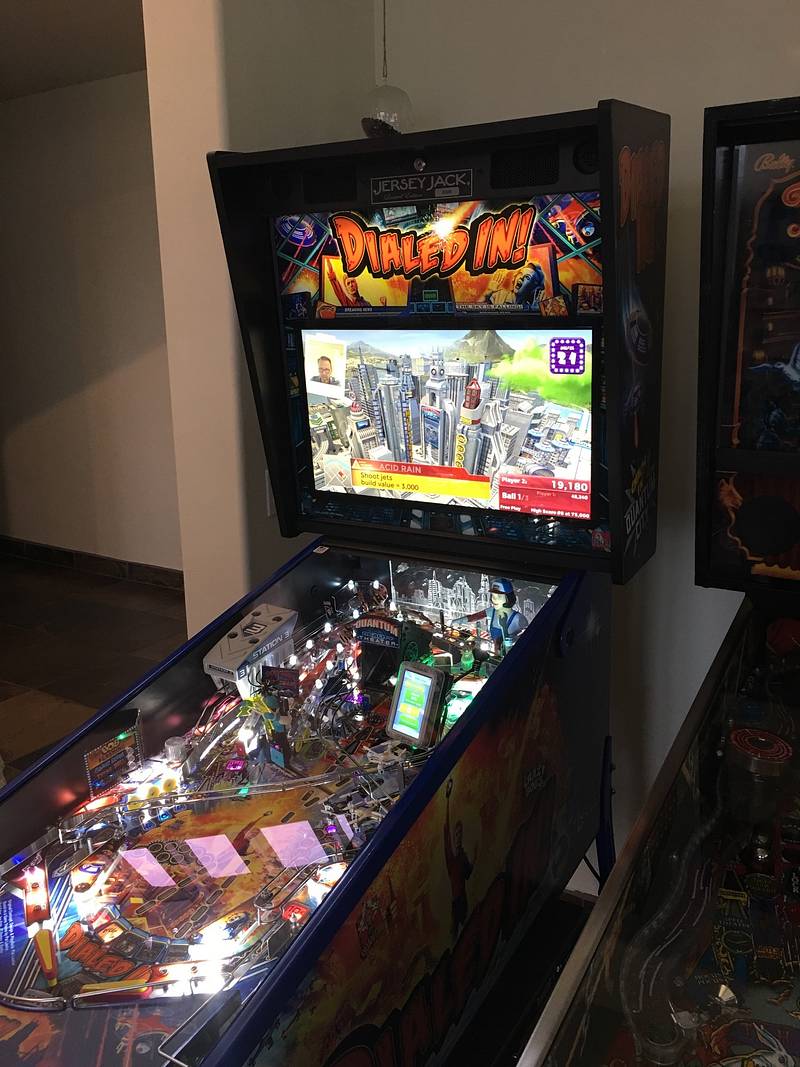 Just realized I'm missing the shaker during game play. Works in test. Is there a setting that I'm missing or is it infrequently used in the game?

Its used a fair amount.... maybe turn it up a little?

Yep -- turned up a bit and noticed it. Just too engaged in the gameplay with the first few games.

JJP still aren't setting the trap door up correctly after all the reports? .

With so many reports, it did make finding the problem (and solution) pretty easy.

Has anyone had a problem with the screen on the phone go black/off during game play. I've noticed that mine will flicker off for a second or two and then come back on, and then sometimes go completely black (or off). It comes back on if I reboot the game or if I unplug and plug back in the power to the phone screen (from under the playfield). I've checked the video connectors at the PC and on the phone, and they are screwed in tight. I don't recall seeing anything about that in this thread and I'll send a support ticket to JJP, but figure someone here may know what the problem is. 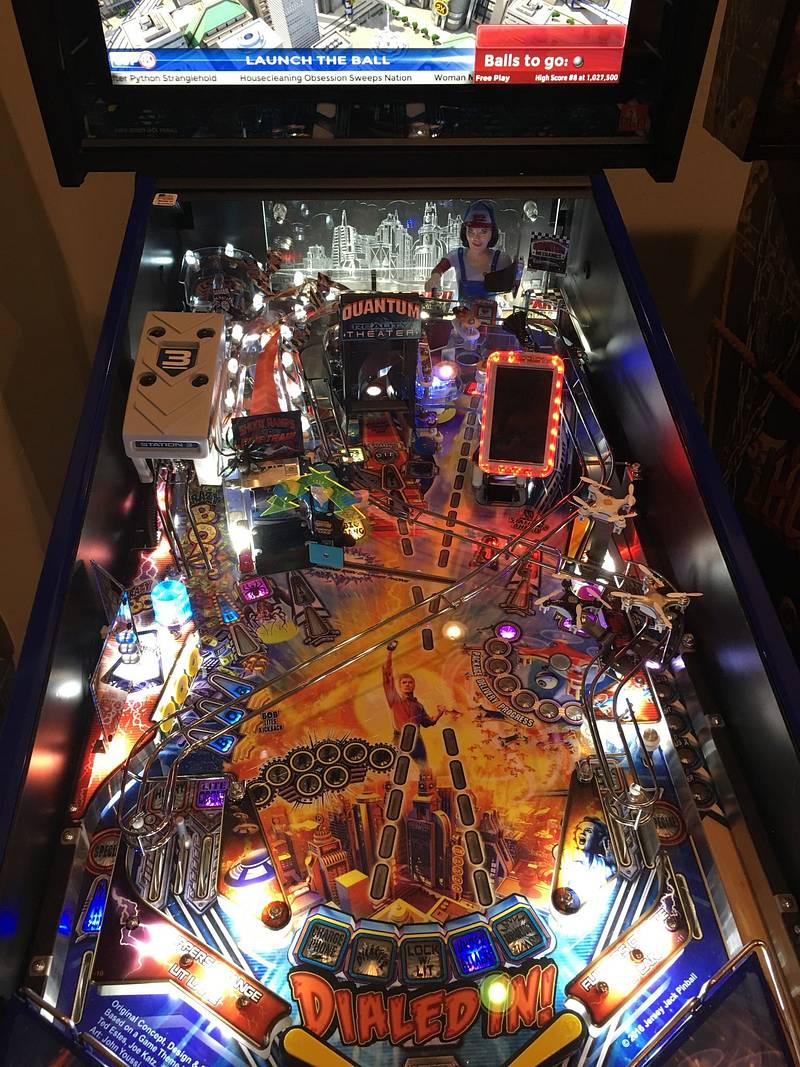 Update on my phone. My game is 2 weeks old and the phone has been having progressively worse problems. First it was blinking off, then shutting off, then losing a color channel (making the screen appear pink), and now always flickering, changing colors, or shutting off when balls hit the posts or VUK. Between the problem getting progressively worse and the screen shutting off when balls cause vibrations close to the phone, it definitely appears problem with one or more connections in the phone. I took it apart, reflowed the solder on all the headers going to the display board, and reseated all the connections. No improvements (might be a SMD component on the screen board). I had filed a ticket, but after 10 days called JPP support. I spoke to Frank and he was excellent and will be sending a replacement phone. It would take a week or two before the have phones to ship and I'll keep people posted.

One thing that bugged me about DI was the lack of light on for the backglass. The sides especially were completely unlit and had some nice art. I added in some cool white LED strips to the monitor brackets and another set below the stock ones on the computer case. I really like how it came out. In the photos, my camera overexposed the before (you can tell by the color of the sky), so the added LED strips really make the top pop. Also, I really like how the art on the sides of the monitor now is visible. 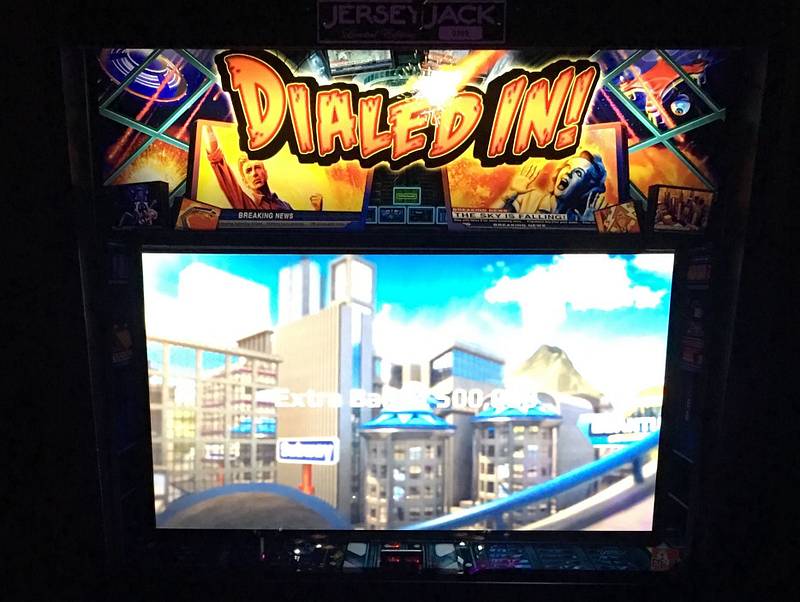 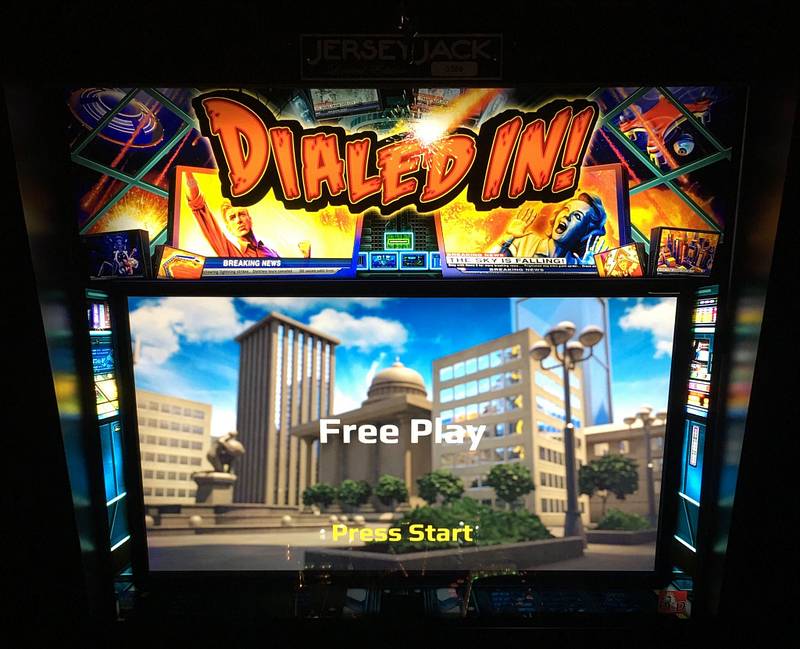 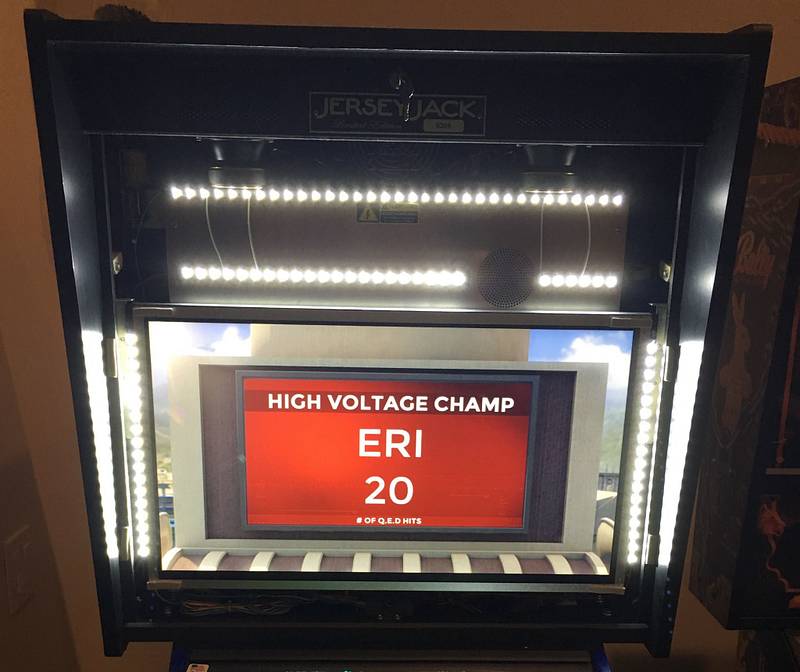 The sides are nice. We have an rgb version for the backbox.
» YouTube video

That is nice. I'm working on a Pinduino version to interact with gameplay, but this was easy to build with parts I have around. A $5 roll of 5050 cool white LEDs goes a long way. . .

Where did you get power for the strips?

Same source as the LED strip that is there. I made a y-splitter for the ones on the sides and just pulled the power down for the second strip on the computer case. The LEDs are all 12V. Here is a link to get a 5M roll for less than $5: https://www.aliexpress.com/item/5M-3528-LED-Waterproof-Strip-Light-300-LED-DC-12V-Cool-White-Blue-Yellow-Red-Green/571468879.html

If people are interested, I can do a writeup on how to make this setup as DIY. Just quote this post and say "please do" -- three responses and I'll do it. 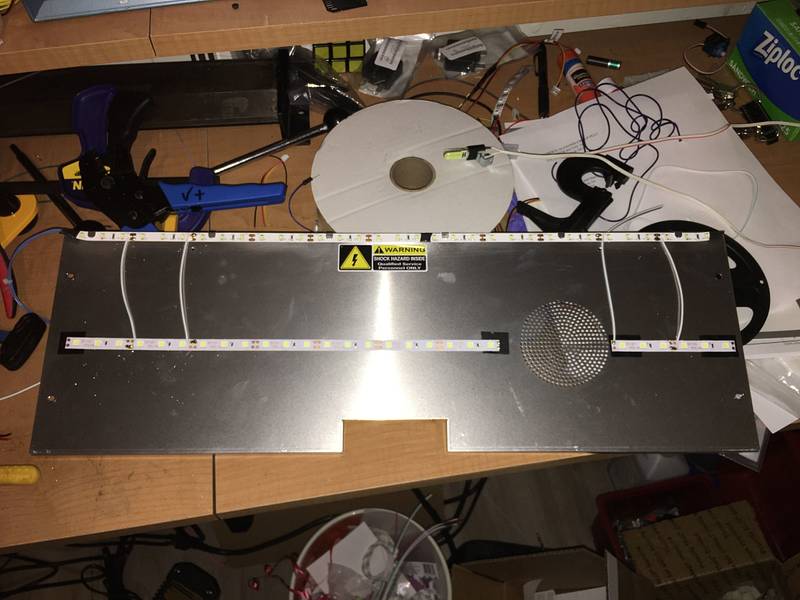 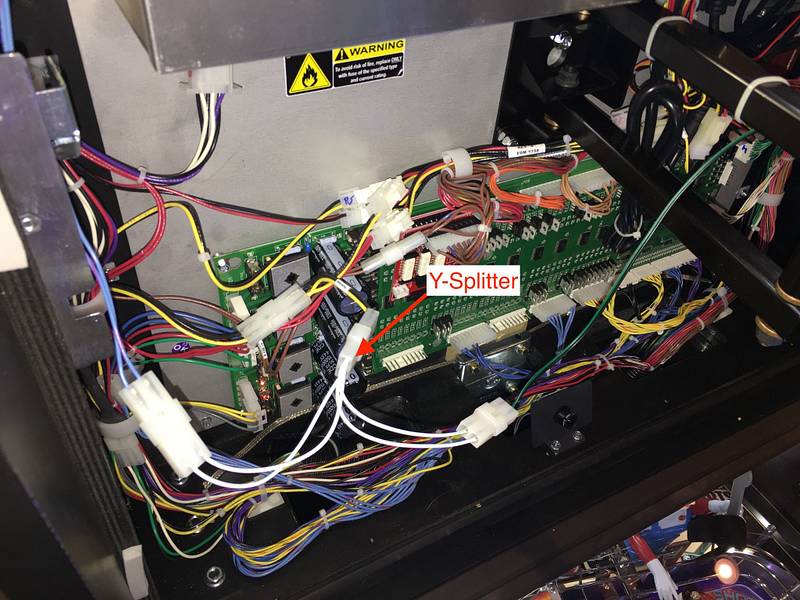 A couple of more photos of the setup for getting the sides lit. I ran the wires under the monitor to connect the two sides and over the top-left to the power. If anyone does this, make sure to cover the ends of the LEDs with heat-shrink tubing or put down electrical tape to prevent shorts against the metal of the monitor frame and computer case. 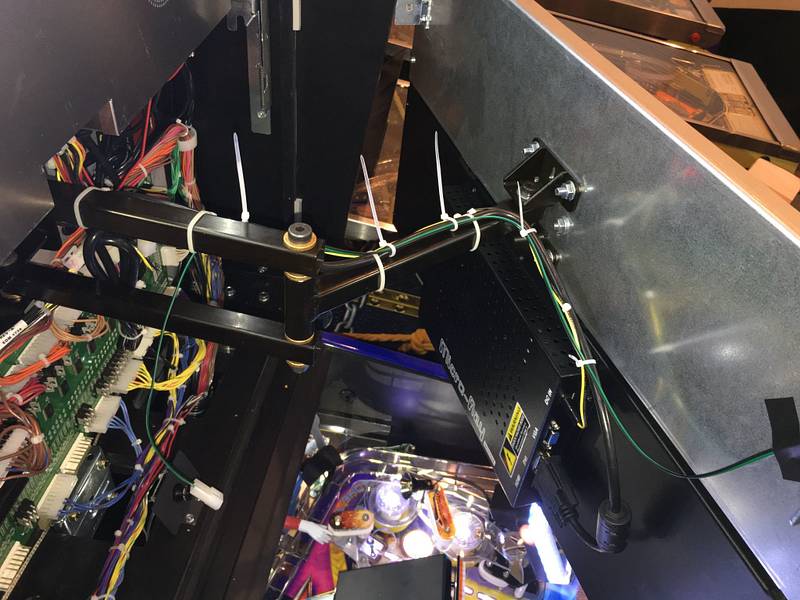 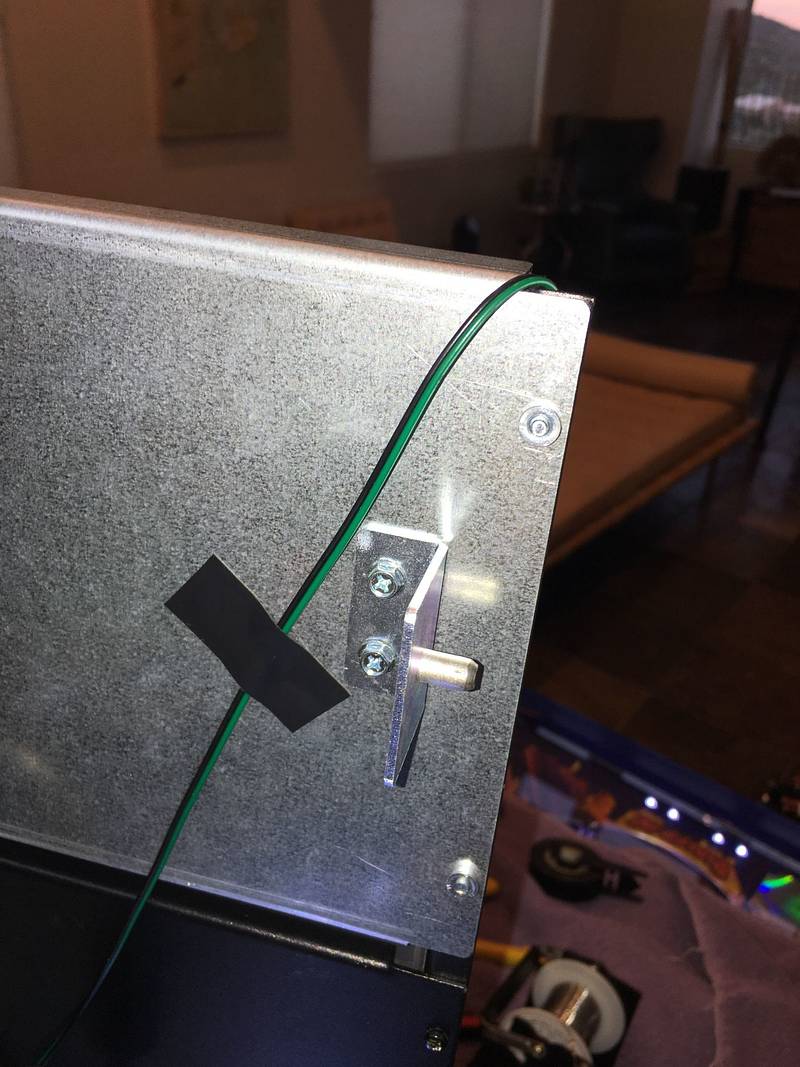 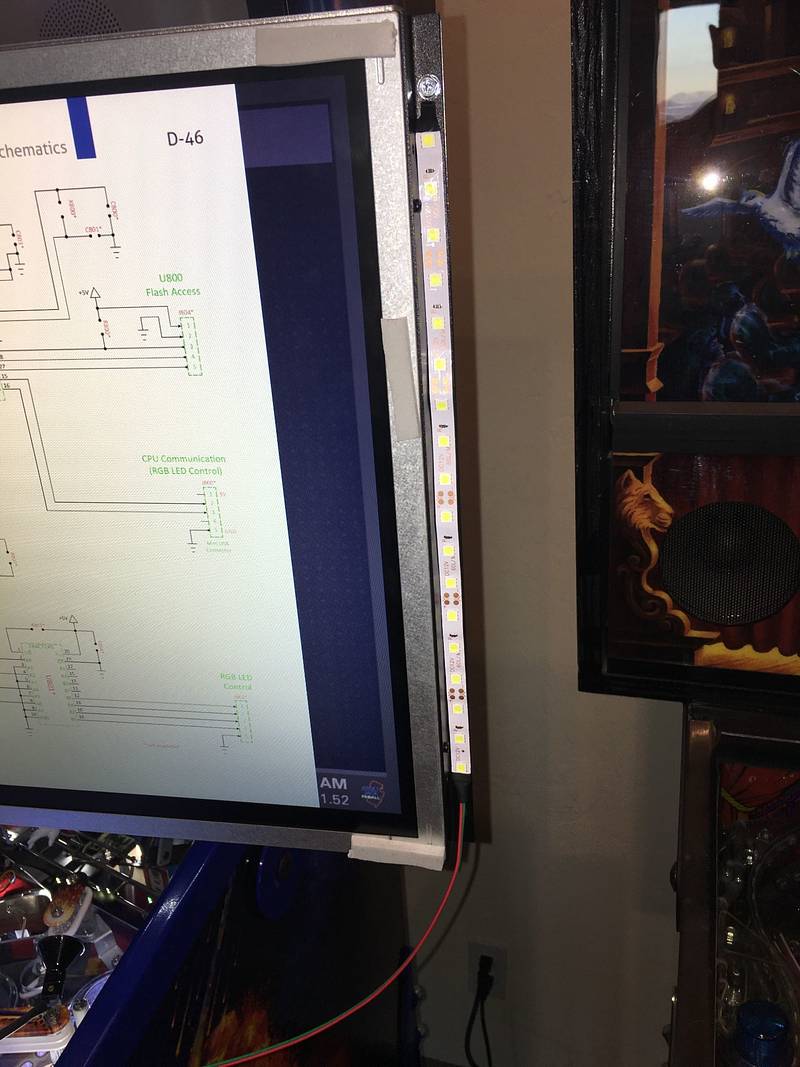 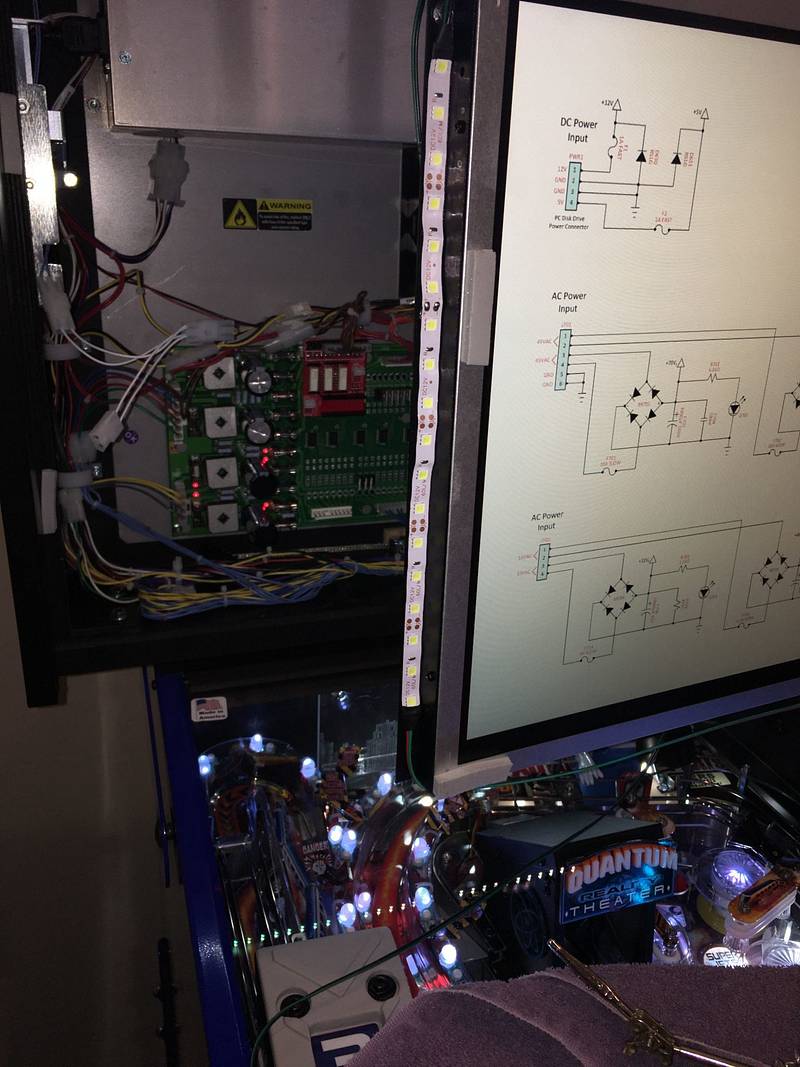 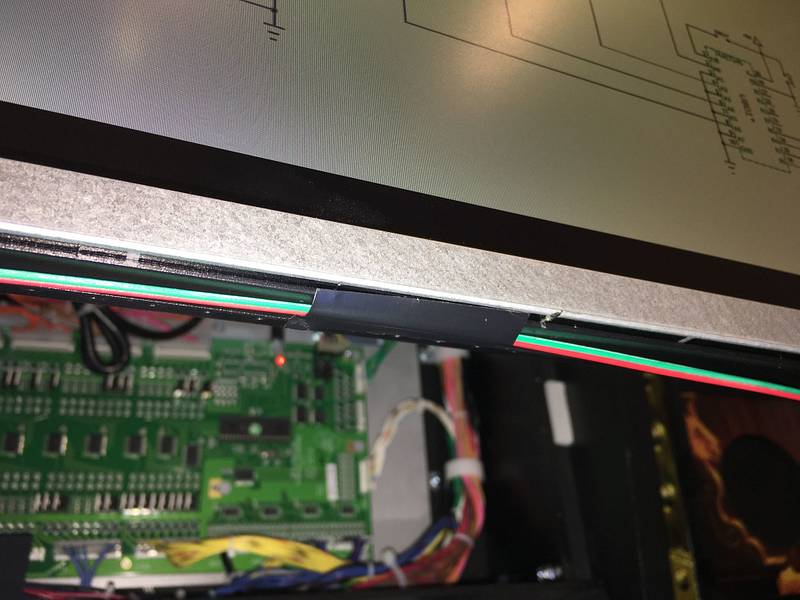 That looks sweet! Please do

That is three! Here is the guide: https://pinside.com/pinball/forum/topic/diy-guide-to-adding-backbox-lights-to-dialed-in

I know that this thread has been bombarded with cabinet side lighting (aka "Stadium") adverts, but I just posted another DIY guide to make it for Dialed In: https://pinside.com/pinball/forum/topic/diy-cabinet-side-aka-stadium-lighting.

This video shows it in action using a Pinduino to drive lighting effects, but it can easily be done with any type of LED strips. 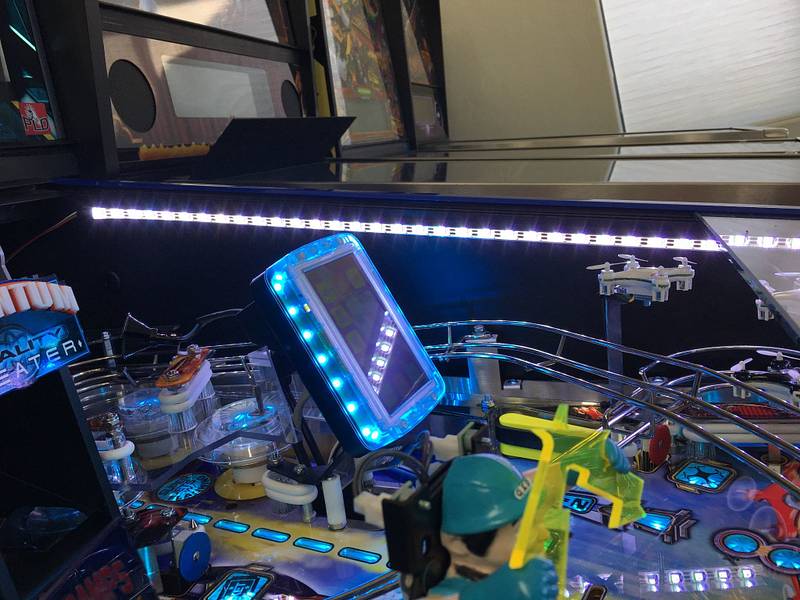 I'm sure the extra lighting is great. Thanks for posting.
For anyone who doesn't have the game, I'll say this...DI has an excellent light show and needs nothing else (to me). I can't remember a better display of color and effects on any of the pins I've owned throughout the years.
Either way, you can't lose with this pin.

I agree 100% The lighting on DI is superb (especially when compared to WoZ). One of the motivations behind this was testing how the Pinduino works with JJP games (which it did without any problems). The other was finding a good place to drive some lights with the Pinduino. I was thinking about doing the ramps for non LE owners, but it is a lot of work to access that ramp. Also, I really wanted to show people how easy it was to do cabinet side lighting. If anyone is interested in interactive lighting for the ramp in DI, just let me know.

Often times during a mode when I hit the theatre as need it, it constantly releases straight down the middle and drains.
Any fix for this? Under the test menu I increased and decreased the delay but it still happens.

I decreased the power of the phone scoop power and it now consistently feeds the right flipper. You might want to give that a try.

Just finished installing the backbox lights. Thanks lyonsden for the idea and great instructions. Looks great! I also added some on the bottom. I attached them to the monitor so there was no need to add a quick disconnect.

I'm not sure what I'd prefer, just complaining.
It just seems too easy. The lock automatically lights after the first mode, then when you lock it through normal gameplay, the phone is no longer accessible to modes. I'm always feeling like I need to get that multiball out of the way in order to progress through the rest of the game. There's no avoiding it. The multiball is fun, but it's awarded so early in the game play, every game, that it almost becomes a chore.

I completely agree. If you don't stack a mode with multiball or have a sim card to collect, it just feels like there is nothing to do in multiball. You can get some point, but it is one hell of a grind to get the jackpots up in value. Much different feeling that in TZ, where you are collecting a serious jackpot, then have a lot of fun getting it relit at the camera, then collect another serious jackpot. Also, the increase in jackpot value shoot ramps and/or orbits makes it more fun.

Dialed in multiballs are just blah. It would be great if there was a good reason to collect all of them for minimal points other than to relight them for slightly more minimal points.

check_switch_26 -- this is just a small critique on an otherwise superb and wonderful set of code you've developed for the game. If nothing changed in the code, I'd still be happy.

One idea is that after collecting the three jacks, the side ramp jackpot gets lit for a 5-10x rather than a 2x jackpot. If any of the regular jacks are lit, the side ramp collects 2x.

Another would be that the side is 5-10x when lit, but only relights after the three normal jacks are collected.

And a final idea: there is a progress meter on the screen for escaping from DIE Corp agents. As you collect jacks (or perhaps some combination of shots), you make progress on an escape . If you escape, you get some mega points or light a shot for mega points..

Finally made it to Armageddon for the first. Doubled my previous GC score. Such a rush! Unfortunately, didn't finish collecting my sim cards so Showdown is still waiting for me. 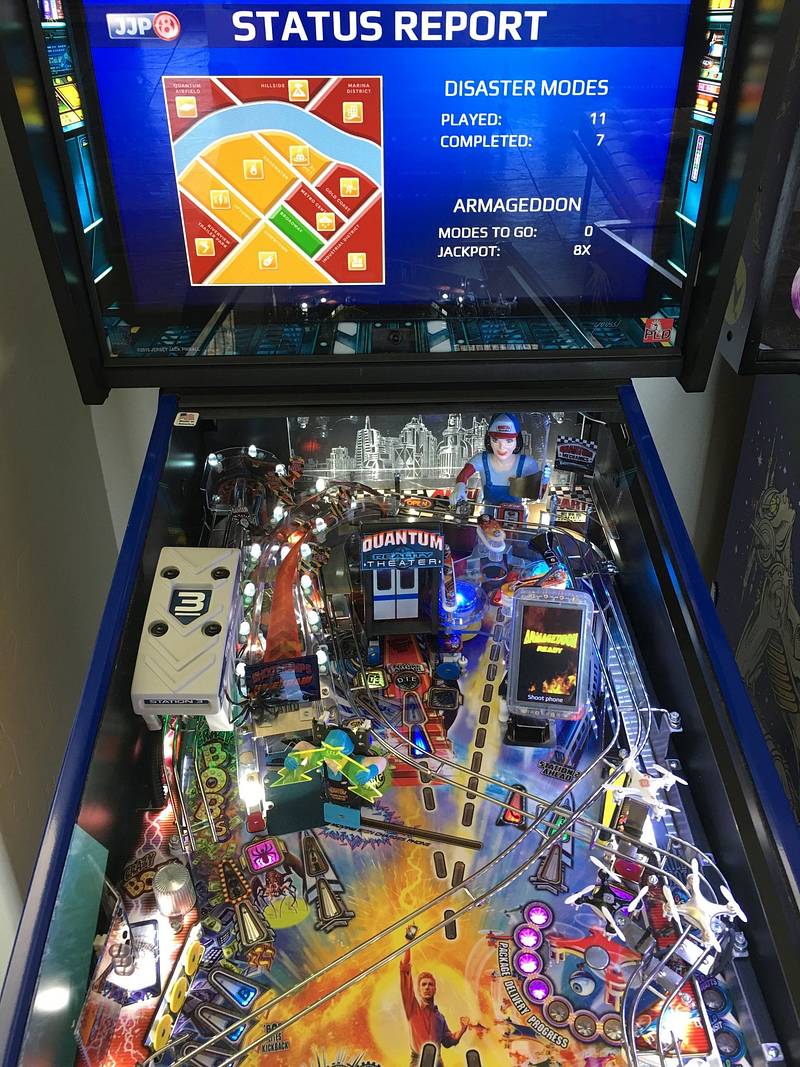 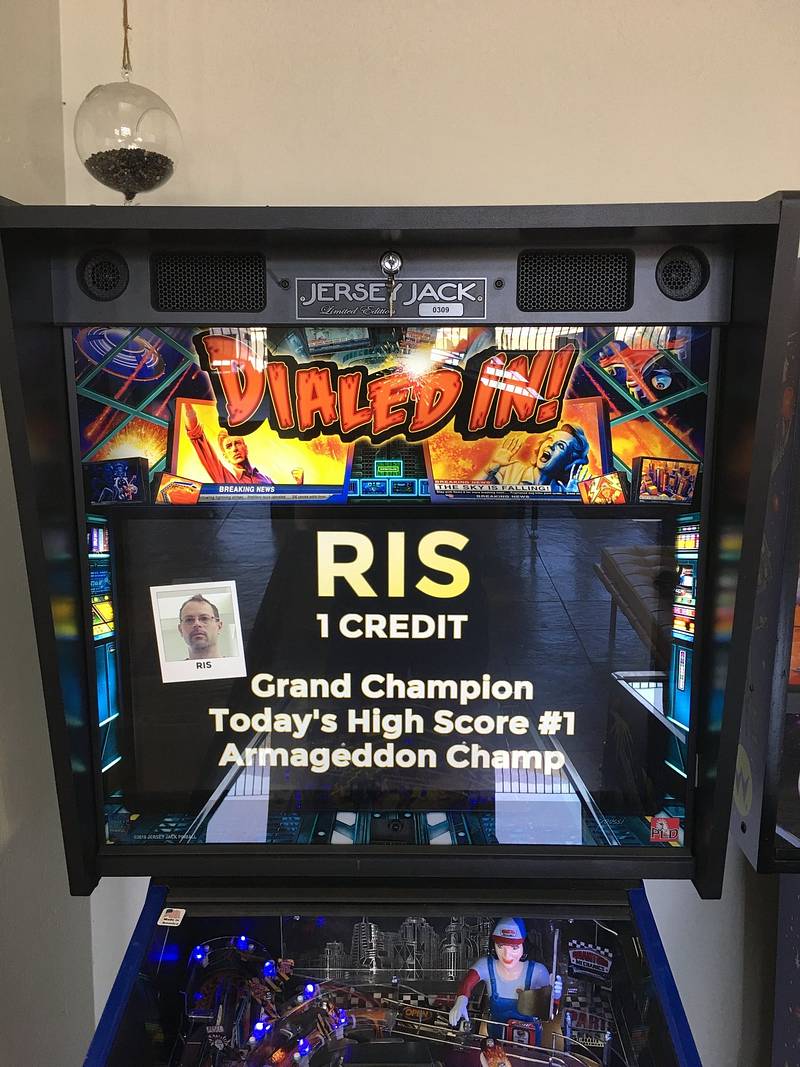 Got error switch 11 left loop made stuck open.
See picture..the opto is out if the holder..
Arent they glued or soldered in place ? I can move it around touching the wire from below the playfield. Have to disassemble the ramp to reach this..[quoted image]

I believe the opto LEDs and receivers are held in a plastic bracket with a “lid” to keep them in place. The lid probably feel off yours and is somewhere in your game. I had the same problem with a couple of optos under my playfield. However, they were easy to get to and I ended up holding them in place with a piece of electrical tape (though hot glue should work too.)