You're currently viewing posts by Pinsider noflip95.
Click here to go back to viewing the entire thread.

You're probably still losing one of the sound lines somewhere along the way.

Yes there is one command line missing, and I can tell you which one.

On SYS80/80A the S1..S8 sound signals are driven by the MPU board (and the drivers board - replacing the Z13/7404 on it, was a good way).
But the additionnal S16 signal was not original planned, and Gottlieb use a lamp to drive this one. On the schematic you can see that the S16 wire does not follow the same way than S1..S8.

The missing signal can come from several places:
- The sound board itself. The S16 entry stage use an intermediate LM193 (U24). It can be toasted, but that's extremely rare.
- The connectors. The S16 goes through several connectors before arriving at the sound board: A3J2 from the driver board, A12P4/J4 in the lightbox, and A6J1 on the sound board.
- The driver board. The S16 "sound" is basically the L9 "lamp" ! Thus, check if the Q10 transistor (MPS-A13) is burned or not.

Yes the problem can come from the driver (Q10 or latches 74175), or the sound card. Unfortunately, on the SYS 80A, Gotllieb has not planned a test for sounds (what a shame!). I had done a few years ago, a special ROM (2716) for tests, that played all the sounds of a SYS 80A, but I do not remember where I put the binary file!

There is a tip you can try, to identify if the sound board is able to play the voices correctly : force the S16 signal to the ground.

To force the S16 signal to 1, it should be forced to ground. Easy to do on the sound board : connect a wire (using a grip - or even with a temporary welded strap) between the two resistors R30 / R24 as shown : 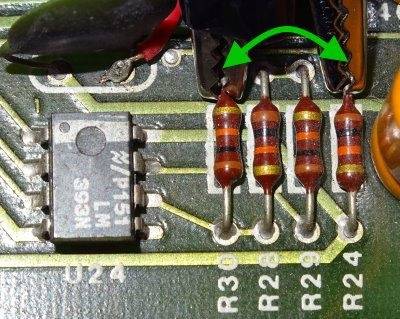 Test_S16 (resized).JPG
This will permanently drive the S16 to ground (set it to "1" logic level).
No risk to burn the Q10 (L9 output) as this one also drive a ground signal.

With S16 forced to ground, the message "FIRE" should be played twice (at start, and after ejecting the ball - and of course, another sound between them).

If you heard the "FIRE" voice, then this mean that the sound board works fine, and the problem is on the driver.
If not, then the culprit is the sound board.

Another stupid idea to verify : be sure that you have an U.S. Devil's Dare Game ROM

Because there is an export model, and this one use the simple "6530" sound board. The rules ares the same, but the sound commands are dedicated to this board.. and have only 16 sounds - and as far as I remember - the S16 signal is never active in this version.

Yes, the 74175 can be checked, in circuit, using a simple voltmeter

Indeed, most of the failures on the driver boards are due to the transistors, but it happens sometimes that it is the latches that are burned. It's more rare, but we've seen it on several boards.

It's a bit less than 1/10 s, but long enough to be detected by a voltmeter (digital).
Simple connect the voltmeter at pin 7 of Z3 (+) and pin 8 (-, or any ground place). At normal time, the voltage displayed should be about 0.00 and stable.
When starting, after the ball ejected the voice "FIRE" is played, and the voltmeter display should vary quickly (but noticeable). If not, the 74175 is burned.

Yes, here, about any technology can replace the "true antic TTL" 74175.
Sometimes these oldies are difficult to find.

On the driver board, there is absolutely no speed limitation, nor signal level problem.
If you can found them, the bests are the HCT (74HCT175) more modern, less consumption.
But a 74LS175 will works perfectly.

Testing the D2 inputs was a good idea, to be certain that the Z3 inputs are correct.

If all components have been replaced, I don't see were could be the issue on the driver board. May be a cutted track somewhere or a bad contact on a connector. Cleaning the J2 connector on the driver board, using an abrasive gum could help.
To be sure that the L9 signal is not interrupted : with an ohmeter, check directly from the output of Q10 (from the collector pin) and pin 5 of U24 (on the sound board). If there is a measure different from 0 ohm (or some ohms) the problem could be on the connectors.

Another possibilty, is that the Q10 - ECG 46 is deffective from the factory. This sometime happen with NOS components.

I don't know in what state are the pins on the J2 connector of the driver, but sometimes people charge the contact again by adding solder. It deforms the slats of the connector and it causes bad contacts.

The type/model of the components can't be the problem, using 74xx or 74LS make no difference. I've also check the characteristics of the ECG 46, and it's a good substitute of the MPS-A13.

You're currently viewing posts by Pinsider noflip95.
Click here to go back to viewing the entire thread.