I have a Charlies Angels - a GTB Sys1 from 1978. It was an early attempt by GTB to try out solid state technology and they made a more limited run of EM versions of the same game. The EMs are desirable because of there rarity, the SS maybe no so much. I remember back in the day the tv program was huge.

I've read that the rule set for the solid state version was a bit of a test to see how far they could push the then technology. So there's lots of what I would call if / then rules. eg hit bullseye target when 2x is lit to light 3x, a red drop target down changes the score value of a corresponding star roll over and so on. In reality it means the rule set is a bit bizarre and I think that helped limit the games popularity? It's not as straight forward as other early solid state rules are. A few shot limitations also are criticised - eg hard to back to the top rollovers. The left side orbit rarely makes it back up the H lane and shots to the right side often fail to make the lane rollovers. This is a shame because the lanes do a fair bit. H or I increase the white drop value and resets the white drops. If the bonus is over 11k then H lights the whites for extra ball and so on.

Now, the game I bought was a non working project, so I wasn't surprised that the mpu board is failed - age, abuse, Rockwell spider chips and so on. Repairing these isn't really an option, but Pascal and Wiumph replacement boards are available. These are good boards but maybe over capitalise the game as it's not that desirable. My particular game also needs the usual clean up and some cabinet repair, the back glass is ok but a fair way from perfect.

So it occurs to me I could convert the game to a home brew. Charlie's Angels becomes Dave's Angels. I've always wanted to try a home brew pin, and have ideas scratched out and a few themes to work on, but it's a huge task to go from a blank sheet of paper on your first diy pin - pf to lay out, rules to sort, artwork etc etc maybe it's too much, at least for me for my first attempt.

So I thought why not rip out the GTB electronics and replace it using MPF and OPP. I like the distributed model of OPP and the game is technically simple with just two bumpers, two slings and two drop banks, less than thirty switches and forty lamps - it's really an EM hiding under a solid state cloak.

The plan is to just replicate the original game rules initially and then maybe extend them.

Here's a few pictures of the game as I got it. Stay tuned, I'll update as I progress. 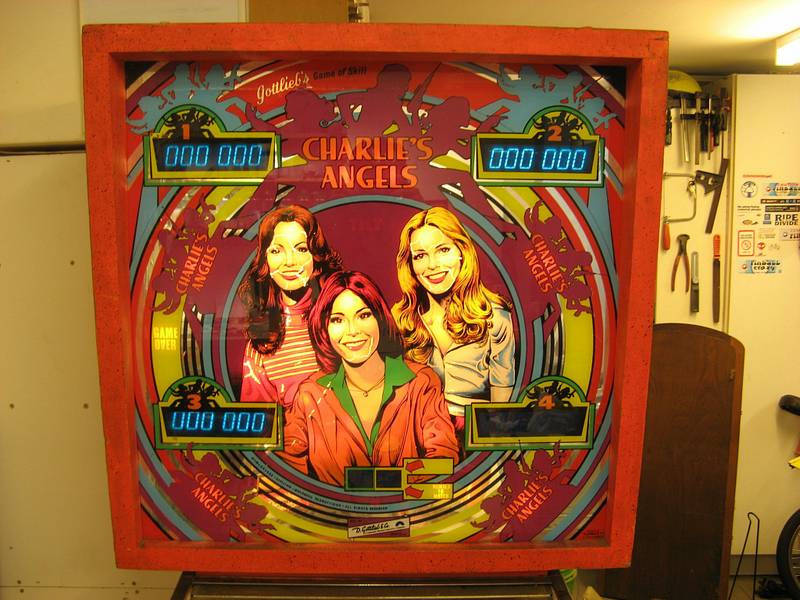 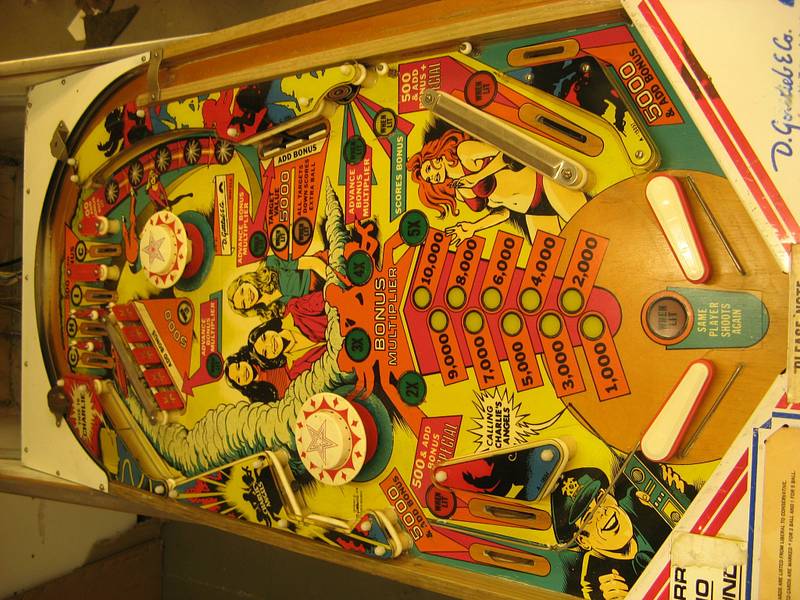 IMO, it's in nice shape cosmetically so I wouldn't change any of that. Overhaul the innards and make it play well, hopefully provide a way back to original gameplay as an option if you ever resell. Have fun with it!

Thanks wayout - It's certainly in too good condition to trash it and also in case I stuff it up or am unable to finish my conversion I plan to make everything easily reversible - most of the ideas for this I've got sorted out in my head and I'll explain as I proceed. Worst case is I have to install a replacement board and just end up with the standard game.

One of the great things about OPP is the cost - very cheap provided you are prepared to do a bit of work yourself. No problems for me and I'm happy to price my time at sweatshop labour rates!

For a few dollars I grabbed two STM32 "blue pill" and a St-Link V2 programmer. There's a bit fiddling, a lot of reading and learning to get it all to work, but in essence you download the OPP firmware into the STM32. This is done with the serial interface and then you can use the USB connection to load an OPP wing configuration. All this is talked about on the Pinballmakers.com website and there is a google group for MPF discussion. Both of these resources have proved very helpful. Ultimately the MPF game configuration will be loaded. lA couple of Pinside threads have helped and inspired too - have a read of "Tag Team" and "Dealers Choice" home brew builds.

For my setup the first STM32 will have a serial string of leds - these will replace the GTB controlled lamps and a switch matrix that will read the existing switches. This is build on a strip board and I used Jamma edge connectors so I can just plug the existing 1J6 and 1J7 switch matrix connectors - no need to hack the original wiring. GTB have a few switches outside of the matrix - slam tilt and outhole, so these are wired as direct inputs. The OPP wing that has the serial leds leaves the remaining inputs free, so two of these are used. It's not that pretty, but after loading the config I can test that the switches are readable, which they were. I'll add the power connectors and led interface control to this board. 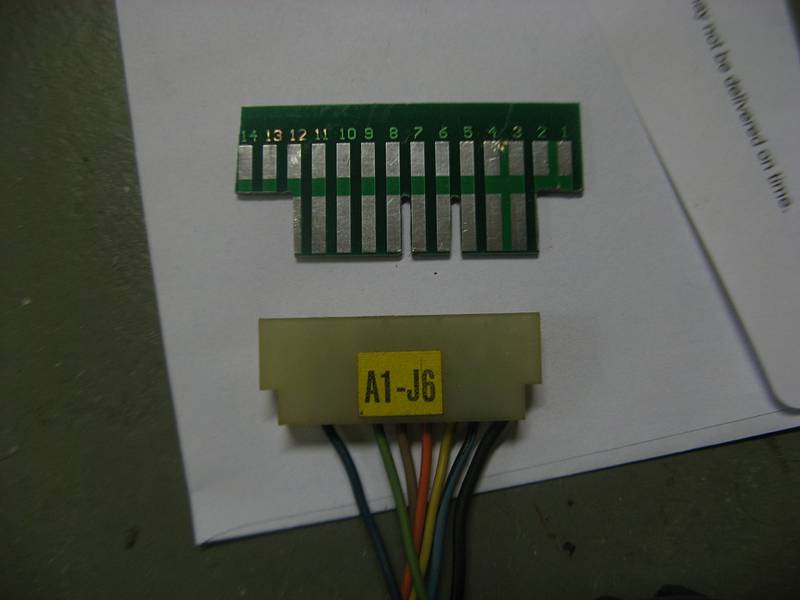 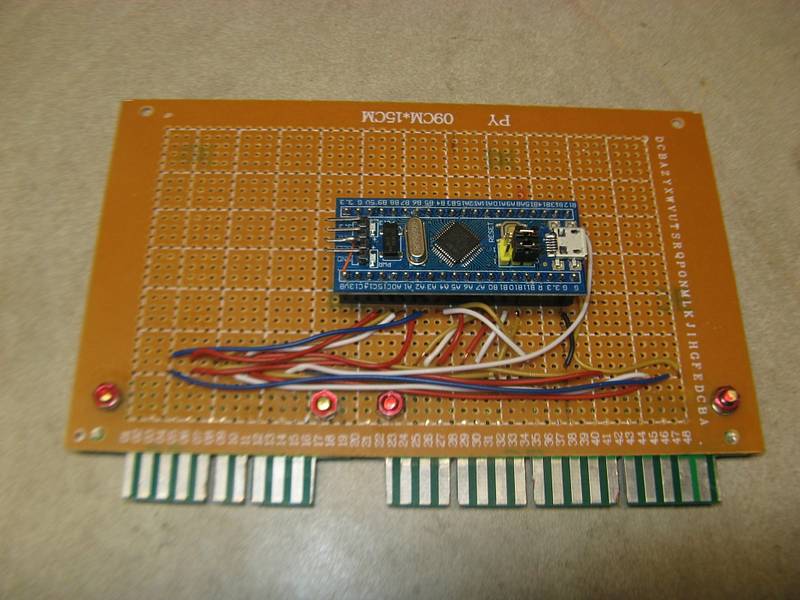 Good luck, my hats off to you. Keep sharing your progress. I would have liked to try a project like this as I have a lot of electronics hardware skills, but often fall short on programming. Just writing programs to run serial LEDs was a challenge, I bought a few Adafruit products to experiment with that type of thing. Dave's Angels - I like that. My name is Dave.