...
My big idea was to make a mounting plate/disk that all of these components mount to and then use a couple of screw slots that will allow rotation of the plate (with coil mount, ball saucer and arm mech) and a third screw hole to lock the plate in place once the shot is tuned. I'll have to take a look to see if I have the real estate to make this work but if so, this will be a game changer (literally).

Instead of a boring screw to lock it in place go all-the-way-out-crazy and have a controlled motor rotate the kick-out angle (random angle or angle set by current scoring/rule in effect); daum that would be aswesome sauce!

Lots of software and hardware tweaks to the table. I now have the saucers kicking the way that I want them to kick with the right saucer raking the MUG targets on occasion and the left kicking to the top of the table also on occasion. I have to say that because there is a lot of variability in how these things kick from ball to ball.

I did a bunch of work on the multiball code so that now there is a 10 second ball save with the start of multiball. I also now have a timed post raise/drop that occurs after every kick out of perdition to prevent cheap reentries of the lane.

I also added a 10 second ball save from the time that a ball is kicked from the trough. Since there aren't a lot of quick ways down after ball launch this probably won't be used very often but it is nice to have.

Lastly I added a slide in the attract mode that displays the high scores for the game along with titles for each score (like "Master of Crockery") and I made some changes to the high score entry routines.

Here's a short video tour of some of the new changes.

Soon you’ll have another source for video assets for your project.

On most tables you put a ball in a ball lock and if the mode is ready the ball locks and if multiball is achieved the ball ejects, simple. The base problem with the design of this table is that the multiball is fricken complicated.

I've also started making the CNC file for machining the final playfield. A BIG thank you to the Pinsider who has agreed to help me out with this!

Well today was the day that I've been putting off for a couple of weeks, the day where imagination meets reality. When I made the white board I used Onevox's playfield as a guide and fudged the locations of a few elements of the playfield to make everything fit. Today I had to make these liberties match the harsh cold reality of CAD.

After hours of work in VCarve I now have most of the layout done. I'll come back at it again to finish off and then I'll go through and double check to make sure that I've got all of the locations correct. Although I'm not going to make the tool paths I couldn't help but run a simulation to see how the playfield is progressing. 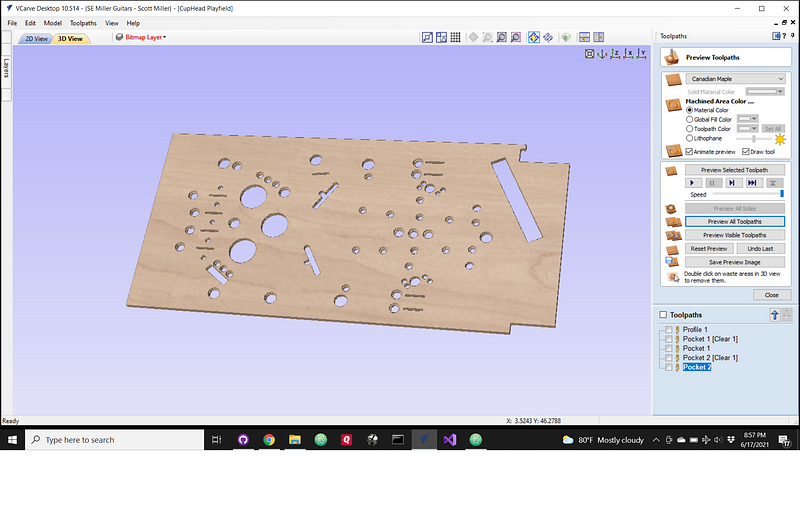 VCarve is pretty slick, I especially appreciate the snap to center feature that makes it easy to find the center point of a line for layout work. Of lot of convenience that is best appreciated by those of us who grew up with T squares...