Corvette or Nascar. Which one would you chose ?

I have a Corvette which is awaiting a full shop job if I ever can find the time.. I haven't even turned it on and I won't as it's poor, dirty current state will not do it justice coming to a decision.

I now have a shot at getting a Nascar from Stern... I only want one racing themed pinball machine in my collection. I therefore have a problem

Would you keep Corvette and skip Nascar.....? What are your opinions and which game is better than the other and why ? Nascar is Pat Lawlor, Corvette is George Gomez. I think they are both awesome designers..

Thanks for any advice.. Pros and cons

How about another wrinkle, have you tried Indy 500?

I think it's a great game.

At the moment nascar is worth just over half of what Corvette is. Corvette is IMO a longer lasting game. NASCAR can be fun for a while, but you either like nascar or cheap priced sterns.

Corvette by a mile. I500 is great as well. Both machines have color dmds available

Corvette is a super fun game, my kids and I loved it and regret selling it. Corvette all the way.

Corvette just a fabulous machine. Just completed a full shop on mine which was similar to what you describe with your machine. Well worth it & it is now my favourite machine. 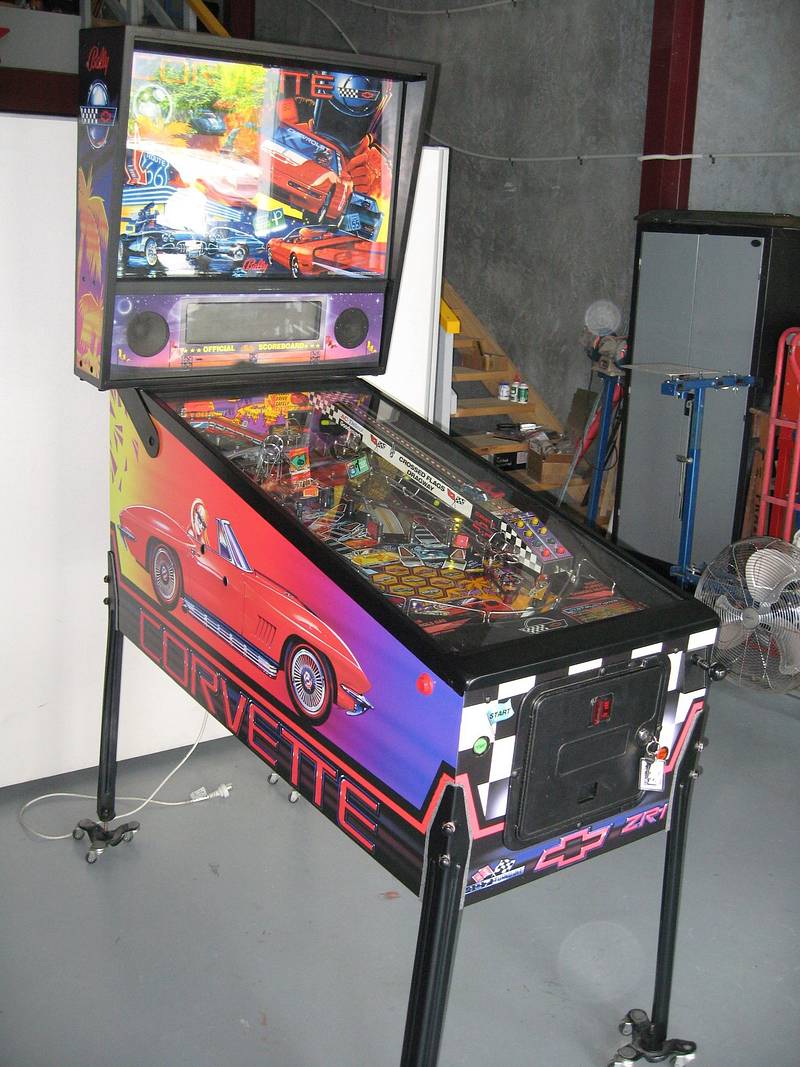 I own Corvette & I500. I've played Nascar. Not even close in game play and quality.

Even though I own Corvette, I think NASCAR is the better game play-wise.

Both seem to have better themes than what they have come up with lately for sure.

Corvette was my first non EM to shop out. I found it fine to shop & to resolve a few 'mechanical' issues.

I think what happens is this..... When you're playing an unfamiliar machine that has problems, isn't set up right or has the P.F angle off, the entire jury in the player's brain mercilessly strikes down hard. The game is being prevented to shine, impress and show the player it's true 100% self.. Meanwhile the first-timer playing, subconsiously already has decided that it is a bad machine. I've seen it at times, standing next to players calling out the verdict. One guy would never ever play Dr.Who again because the elevating mini playfield wasn't working.. He simply didn't know about it going up/down and that there were many undiscovered features he'd never see. He rightfully thought it was boring and passed quick judgement.. (I know, Dr.Who with a static mini p.f would be awfully boring). I guess the mind quickly wants to come to conclusion and there is where giving games a second try in another location or "letting the game grow" can reverse the whole thing..

This is just what I think and has nothing to do with your opinion as you surely know both two games more than well enough.... Though a malfunctioning bad behaving game is annoying as hell. With the bad experience fresh in memory, stepping up to the same game next time elsewhere, the machine is pretty low on the nutrition chain

. It could also mean a pleasant surprise.

Thanks for all input guys... Interesting polarized views. It seems Corvette has the "official upper hand" but each to their own of course. I will just have to see, the guy wants $2100 for the Nascar which is in great condition. Perhaps I buy it and keep both of them afterall... Nascar would have to be pretty awful if my half dead Corvette would compete with it in a head-to-head fun-factor shootout.

You guys not in favour of Nascar, would this then be Lawlor's least successfull title ?

Matt I'm kind of looking for a project corvette, if your close and wanted to sell.

Matt I'm kind of looking for a project corvette, if your close and wanted to sell.

Am on the other side of earth...

For the right price ? ? NASCAR is not that bad.

Both seem to have better themes than what they have come up with lately for sure.

I'm surprised you didn't chime in with Struggle Buggies.

I really enjoyed shopping out my dirty as hell, busted up Corvette.

I enjoy playing it even more now that it all works. The drag race modes in Corvette, the mini games, lots of interesting shots... it's a solid game. Not the best, but solid.

NASCAR feels like a 1 trick pony in comparison, but I've only played it a dozen or so times. It just never pulled me in. But for $2100 I'd buy it without a second thought.

I know you are not looking for new options but Mustang by stern is a fun shooting game. No color dmd as of yet but give it time. Sooner or later I'm sure they will release it. This game deserves more credit. Theme restricted this title to a small audience. Get over that and it is a fun little pin to shoot. Much more modern then Nascar, Indy or corvette. In my opinion. Find one and try it out.

NASCAR is a pretty good game and I’d give 2100 right now for one, but Corvette is the better game IMO.

I have a lot more fun when I play Corvette out of the two choices. NASCAR is fine, but Corvette is fun.

Corvette by a mile. I500 is great as well. Both machines have color dmds available

Am on the other side of earth...

I've owned both. Corvette has a better layout but it suffers from clunky ramps. NASCAR to me is a better game, it's fun. I agree Indy500 beats both.

I have owned Corvette, and it was in SOLID shape. While it has the "cool" factor, I would honestly pick Nascar over it. When that engine breaks on Corvette, people seem to be halted dead in their tracks on how to fix it. Corvette has a super sweet look to it, but Nascar - to me - was just more fun. It's the new Johnny Mnemonic: if you can look past the theme, there is a lot of fun to be had. If I could snag one for $2100, I wouldn't really think twice about it - especially down here in the Florida Panhandle. I'd have to padlock Nascar down while AFM, TAF, BSD, and CFTBL I wouldn't be able to give away to home invaders. Corvette definitely has the cooler toys (IMHO) and a more polished look, but Nascar is just FUN.

To me it is Mustang over I500 over Corvette over Nascar.
But a Nascar for $2100 is definitely worth picking up.

I’ve owned both and I like nascar a lot more than corvette. Granted, while corvette has some cool features I thought the ramps felt clunky as well. NASCAR is pretty cheesy but fun.

Nascar for me! Don't watch Nascar on the tube but the game is fun.

nascar. own (ed) both (corvette is gone, nascar stayed). corvette is multiball over and over. nascar has more things to do. if you have the car assembly adjusted correct and all switches in the game working correct, its a great game. they were shipped with switch issues and many switches went bad fairly fast. dealt with this issue on several nascars. after replacing about 8 to 10 microswitches, all is well. also, rebuilding (replacing) all switches on the car assembly is a must and using a couple different styles instead of the stock ones called for..

To me it is Mustang over I500 over Corvette over Nascar.

This. I enjoy playing automotive themed games and Mustang is the most fun (especially a Premium/LE with the Power Shift gameplay feature) and a VERY underrated game on Pinside.

In consideration of the OP's question, I'd pick Corvette over NASCAR as I prefer its theme and more exciting gameplay.

Corvette over Nascar all day long. Corvette has that one more game feel to it.

I've always wanted one so I'm obviously biased. I sure wouldn't turn down a NASCAR for $2100 though.