- the first is that the face of the panel appears to be a glossy black in between the discreet 4096 LEDs and they catch a lot of both ambient light as well as anything that is thrown off of the playfield (like the sling spotlights that are directed up field towards the back box)
- the second is that the LEDs themselves do not have any sort of diffuser on them, but rather a crystal clear window. if they had a milky-white diffuser, it would eliminate a lot of harshness that people are talking about (however, I have not seen any P2.5 panels that have something like this (see image below) 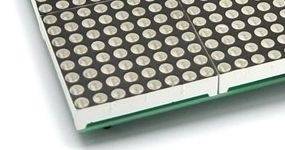 this semi-outdoor effect means that it's more like a DOTS mini mode, rather than the DOTS or DOTS XL modes that are selectable options on the LCD ColorDMD panels.

How far does the LCD Color DMD stick up over the edge of a LOTR speaker panel?? I just finished making and installing a LED Backbox light panel and hadn't taken that into account as my next and final mod on the LOTR is a Color DMD.....

yeah, it's all a matter of personal taste.

with the LCD panels, you have those options available and the games with video footage (iron man, avatar, ac/dc, transformers, etc...) all tend to be much more readable with either dots XL or pixel mode

while I prefer the look of the LED panels for the dot animations, I think that the games that have digitized film footage look better with the LCD panels using either the dots XL or square dot mode (which reduces, but does not eliminate the black or [dead] space between the dots

kind of an unfair comparison. yes, the LED panel is going to look darker without any power running to it due to the nature of the display. however, once you power it up, you will get no "true" blacks, but rather a dark gray from the glow of the display. the unlit LEDs will remain that way, unlit

it all comes down to personal preference and if you want to be able to change the way your display looks (8-bit, square dots, dots XL), then definitely get the LCD panel

I need your support. I received my LCD Color DMD today and it didn't arrive in the condition I expected. I'm not sure if it was damaged in transit or if Canada Customs damaged it during their inspection. I've reached out to ColorDMD for their support and I am awaiting their reply. Can someone please send me a photo of how the ribbon cable is connected and I will try to reconnect it myself, if at all possible...Pictures are enclosed.[quoted image][quoted image]

can you provide another photo of the connector where it came off of the LCD panel? it's hard to tell from the 2 photos if the connector was broken or the relief tab just came unglued from the ribbon cable.