You're currently viewing posts by Pinsider goatdan.
Click here to go back to viewing the entire thread.

I'm looking at potentially starting to change over some of my games to ColorDMDs soon - I'm finally starting to set up the gameroom at the new house. When I do, I have recently seen that ColorDMD is starting to sell color LED boards... and they said they would have a further announcement about this at Expo.

From what I can see on their web site, Tommy is the only game that currently has an option about which set to use. Does anyone know more about what is going on with this option? Is the "traditional" ColorDMD the way to go? Does the LED version give any bonuses (other than the $30 cheaper price tag)? Not sure what to go with when I decide, and I can't seem to find much info on it either!

Thanks everyone, good to know! For those who have modified DE games, how difficult is it to do? I'm probably going to make myself a list and start going through it one by one

Here is a pic of the Tommy with the colorDMD LCD installed.

So, is it a case of you take down the speaker panel before opening up the backbox? Just trying to figure out how this all works, and I don't have a bunch to compare to physically here. All of this input is super appreciated

I might end up starting with one of each and then swap them around to see what looks best in what. They tend to hold their value from what I have seen, so it shouldn't be like I'm losing a bunch of money if I opt to not use one or the other.

On the LCD yes as the top of screen blocks the door from opening ! It's a minor issue that you get used to!

Is this for all games, or just the DE ones?

Since I already had the camera and everything setup I figured why not post one in DotsXL mode too?

I was apparently one of the 14 people that looked through these so far, and just gotta say THANKS! This is SUPER helpful to me!

I *think* that LCD looks a little bit better to me, although I'm not positive on that yet... Having said that, before this video, I still had no idea!

I was another one of the 14 that looked at all of them. I was more interested in dots vs. dots xl. I saw the LED vs. LCD at the Chicago Expo booth, and I like the LCD better. The LEDs are too "pointedly bright". Small bright pinpoint lights with a lot of black space around them - I didn't like that. I purchased the LCD and just received my ColorDMD order today for my ACDCPrem. Hopefully I get time this weekend or next to install it and put the right software download on it. From the videos it looks like I want to find the dots XL setting. Thanks for showing the comparisons on the same machine.

Yeah, from what I saw I agree that the DotsXL seemed like the way to go for me too. I haven't yet bit the bullet, as I will probably be stupid and want to buy like 10 at the exact same time, but my DM is starting to outgas...

I need to get the walls down in the basement and start making more machines appear...

I'm not the horse's mouth, but I started the thread so...

I ended up buying (so far) one of each. LED in STTNG and LCD in Metallica. Having said that, I have been working with a collection of games that has about 10 color DMDs now on a regular basis and in short...

I think the LED looks more "correct" in the older games. It looks like how their DMDs looked, and the four color thing makes them feel just about right.

The newer Stern games I always thought their DMDs looked like they couldn't handle whatever the art was supposed to be. The LCD allows you to smooth that and make it seem more like how I would expect it to be, honestly.

I'm an LED guy now. Cheaper, smaller, easier to install, looks better, and more durable (I've seen the LCDs cracked in shipping).
I think upscaling is dumb 100% of the time so not an issue for me. If you prefer your DMD animations bastardized into blobs the LCD is your only choice.

Curious, do you feel this way on the newer Sterns? I feel like they have built it DMD animations that have been pre-bastardized into blobs, and some of the LCD smoothing modes help them look somewhat better. For sure those games with rendered animation I think look FAR better.

I've started this discussion because I want to add a color dmd to my Ghostbusters premium , but I'm having trouble deciding which is right for me.
Your comments and input a greatly appreciated.

I have been slowly converting the fleet of games in my basement to ColorDMD, and I also have a Ghostbusters Premium. I think I've said the same thing in here before, but for me personally I have found an easy way to choose (since I started this thread, actually!

Older DMD games used only four shades of DMD color. For those, the LED looks absolutely outstanding as they do a great job separating the colors and displaying everything. I have LEDs in games like Popeye, WWFRR and STTNG and I think they look great.

I work with some older games with LCDs in them on a regular basis - DM and JD are the two coming to mind. To me, the LCD makes them a bit more washed out.

Later, and I don't know exactly when the splits happened, Stern figured out how to run a ton of shade variation in the DMDs. In some cases, like Spider-Man, I think this led to the DMDs looking pretty bad as they used actual film stuff but with red. The LCD versions of the color DMD handle variations in color significantly better in my opinion, perhaps because they lack the color intensity of the LED or whatever, but I find that in all cases, they look better in the Stern games with multiple shades.

These are also the only games that I find work decently with the different dot modes - but even without, I have seen LEDs in them and I don't think they look as good.

I have ColorDMD LCDs in Ghostbusters Premium, Metallica and Iron Man and I wouldn't change those. I also work with some newer games on a regular basis, and almost all of them have Color DMDs (or they get them when they blow their original DMDs) and the LCD ones in all of them look great. Spider-Man, Family Guy, Tron all look good like that.

The one game that comes to mind that I would lean toward changing it is South Park. South Park works really well with the LCD smoothing effects to look even more South-Park-ish than the original, even though I believe that it's earlier than the multi-shade cut off of my rule

Five pics to show. You can see how many more colors there are in the Ghostbusters one specifically compared to the Popeye two. I realized this as I snapped these photos - the fact the dots are larger with more colors is, I think, the reason I like it more with the GB one as an LCD. It blends the colors a bit more.

Now, I should also state, your milage may vary, but I know my preference now is very strong. 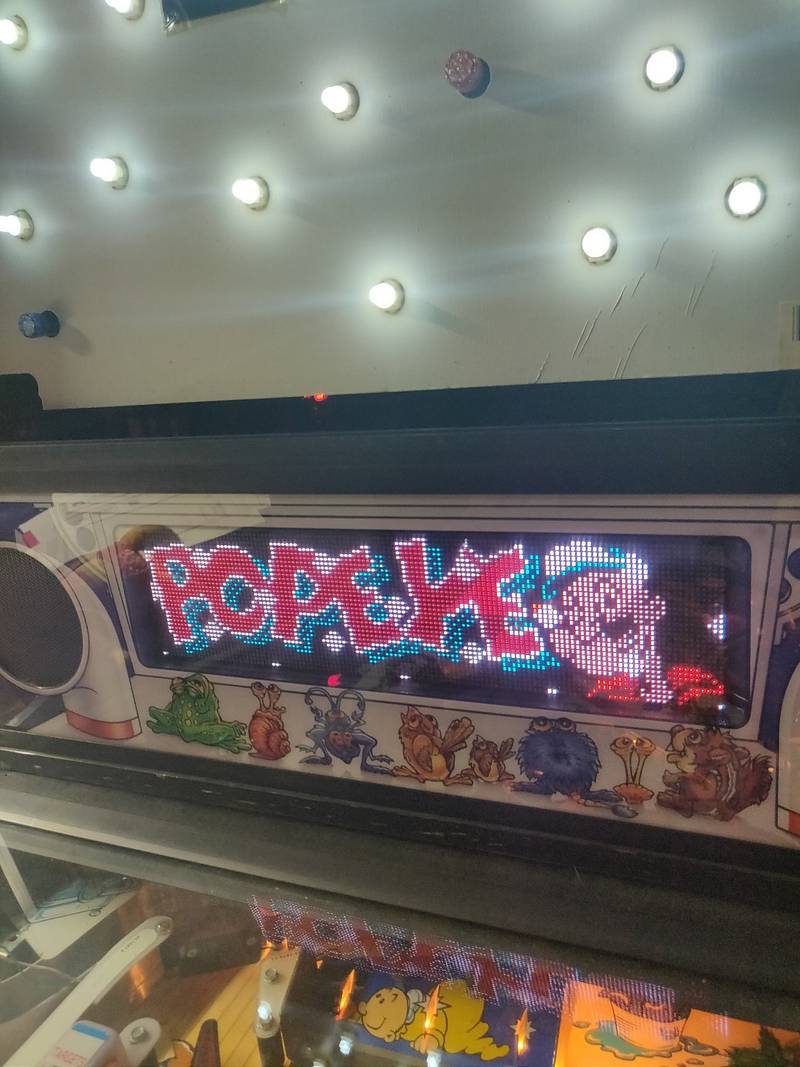 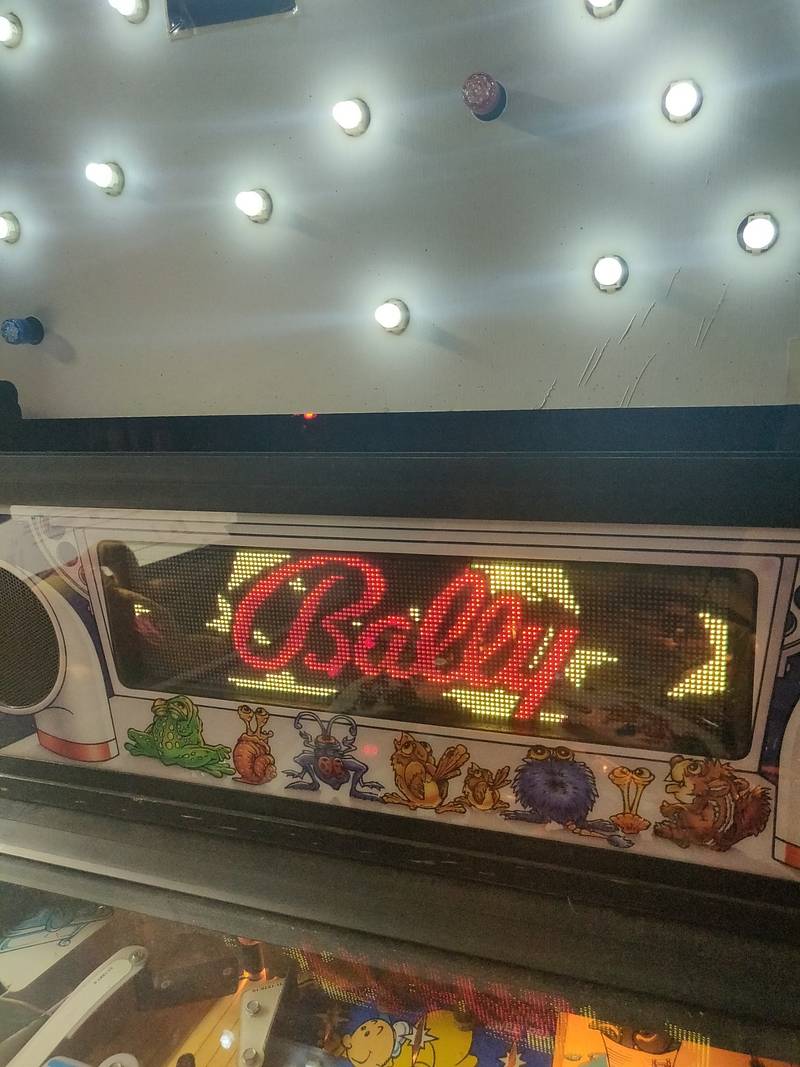 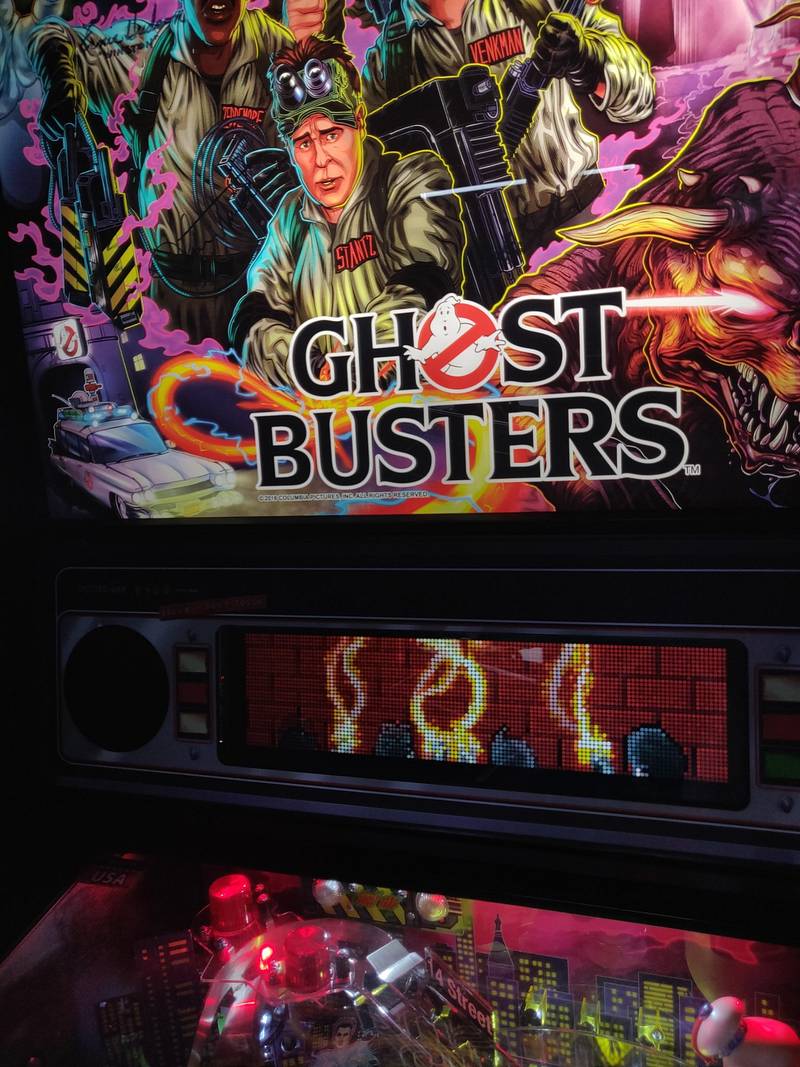 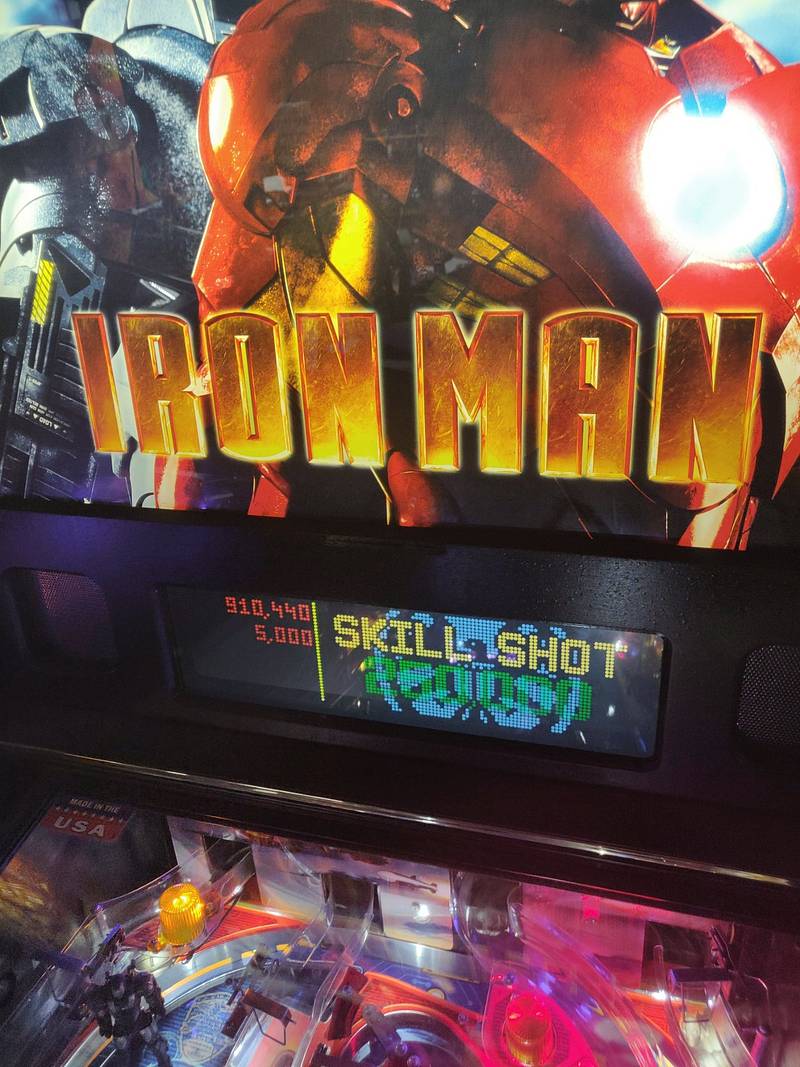 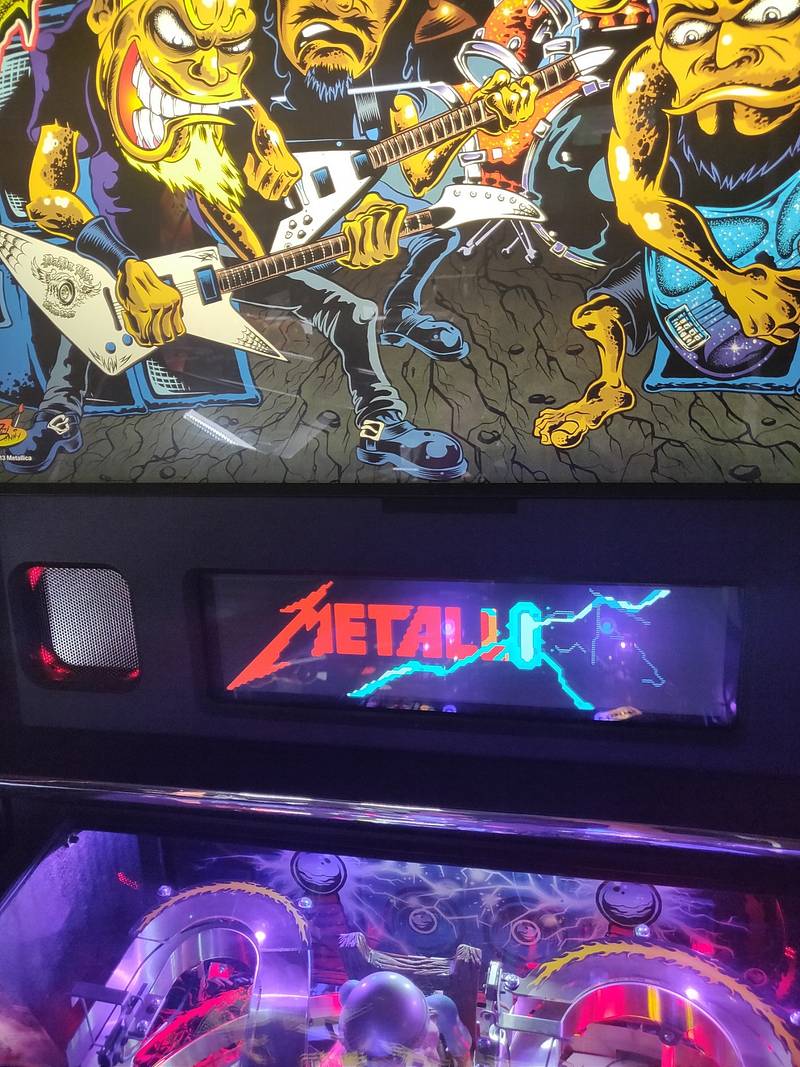 What the heck. Close ups too.. I think this shows what I mean. 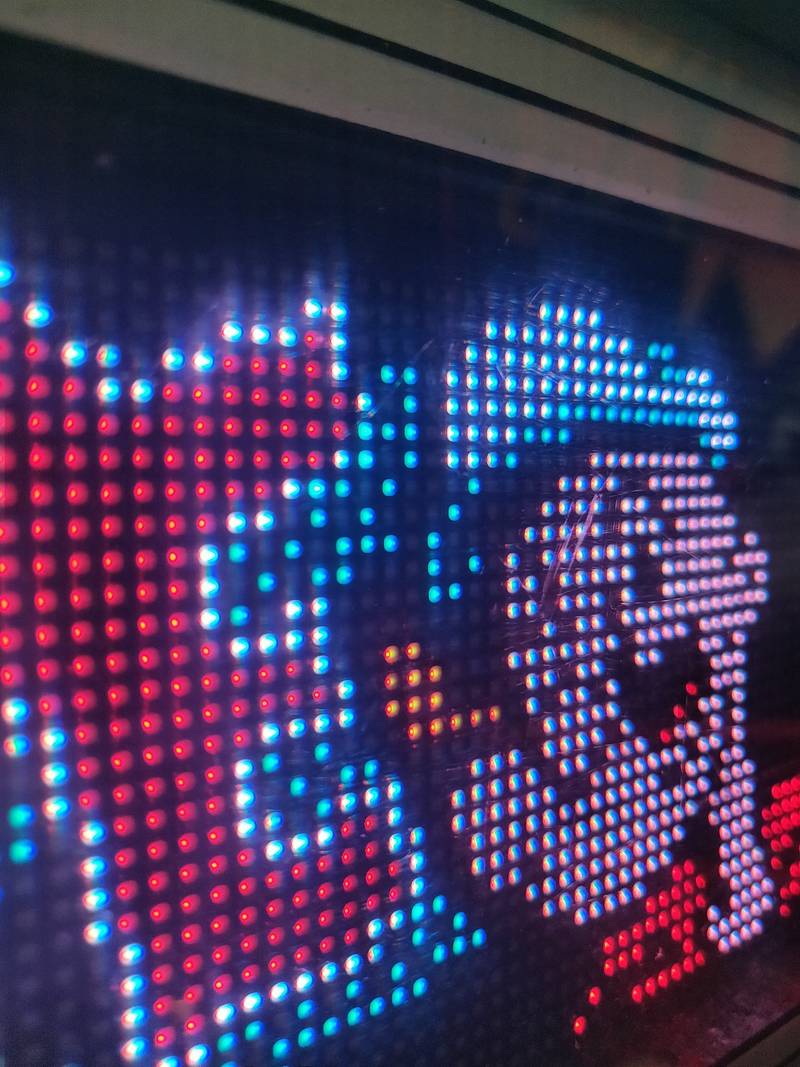 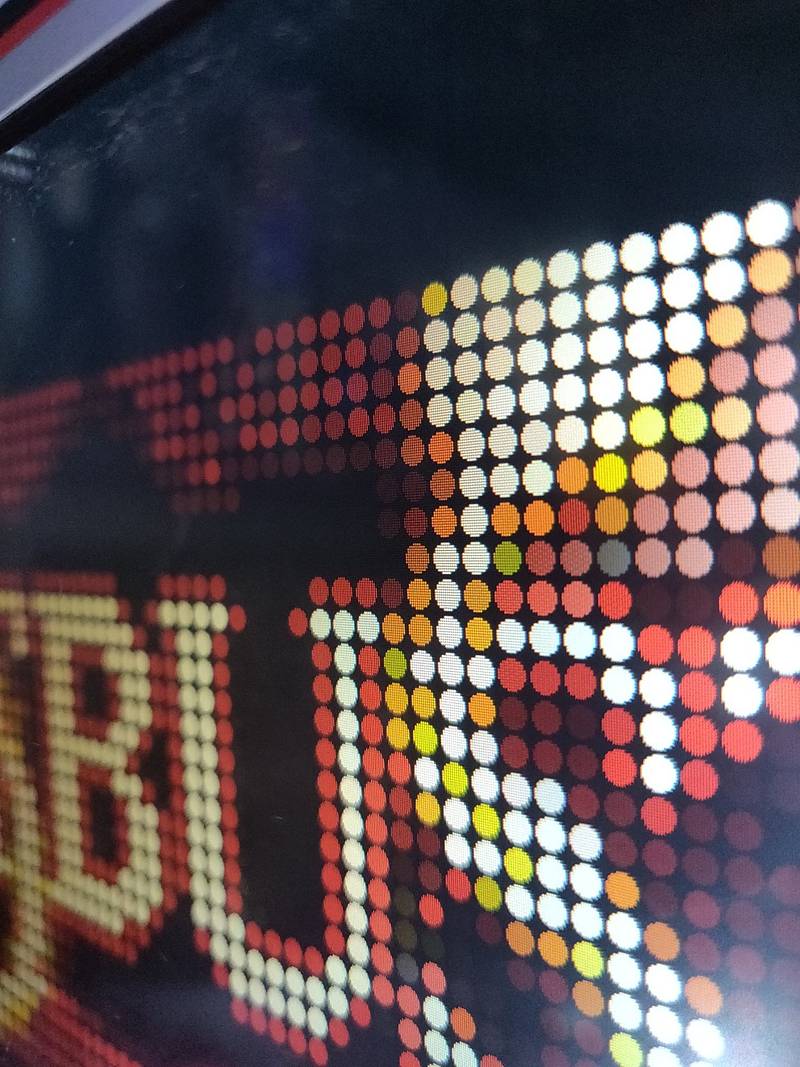 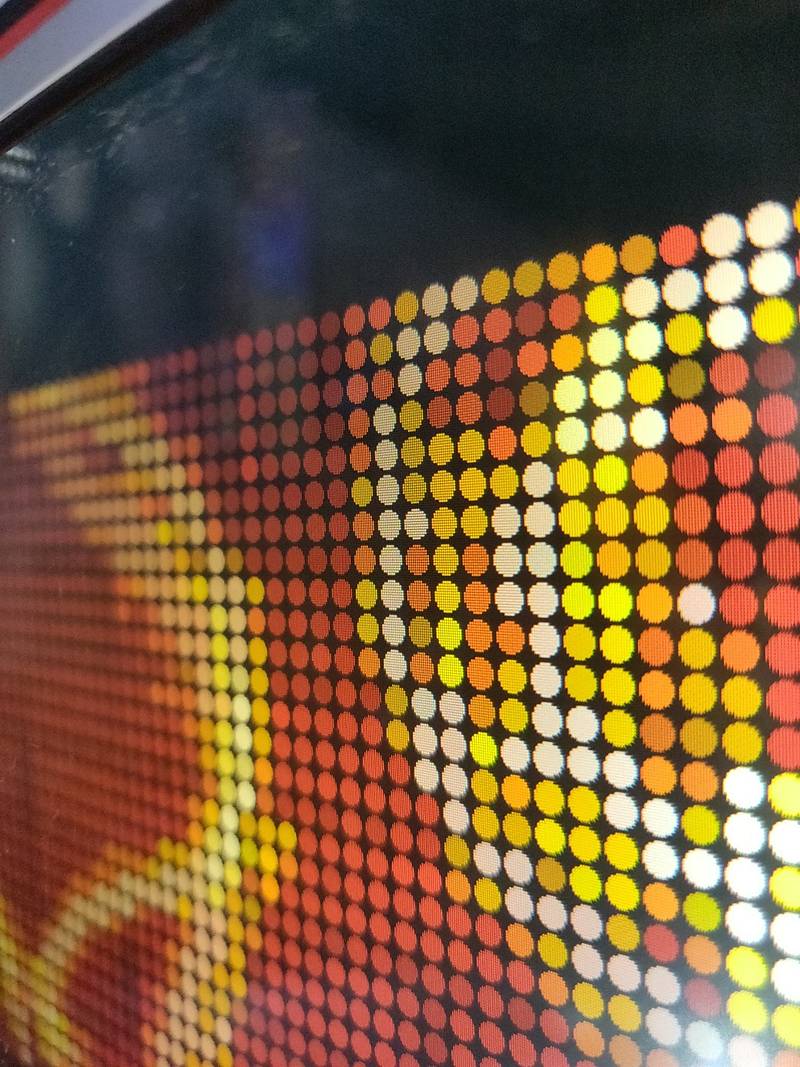 Those all look fantastic, well, except for Metallica (not a fan of "hi-rez" mode).

I like hi rez on Metallica, South Park and Family Fuy. Beyond those three, it's the simulated dots for me on the lcds.

@goatdan I'm pulling the trigger for a LCD ColorDmd for my Metallica premium...should I also get the Gasket for glare? (As I read here is important for a game like Ghostbusters? Or is it not necessary?)
Thank you!!!

Sorry for missing this before. All my games come with whatever is standard for them. I've bought them all as show deals. So, I think, no gaskets.

You're currently viewing posts by Pinsider goatdan.
Click here to go back to viewing the entire thread.