When i first started with em pinballs it was with Bally Bingos. I found a playfield did it up and with the help of JOOP ( cannot remember his second name) I created a playable machine with over 50 different bally bingo games with. lcd tv displaying the different backglasses. So i decided to create a multi pinball machine, one cabinet into which i can install either flying carpet, duotron, bally bingo and maybe my chicago coin fiesta. The orginal solution was based on freetronic arduino shield with 6 mosfets, this worked great for flying carpet but not enough for duotron, so along comes cobrapin pinball controller, great. First converted the orginal gottlieb code to run on the stm32 using the arduino ide first set of test worked great. My solution uses on the stm32 as the game controller and the other board drives the pop bumpers, chimes, score reels etc. I have retained my seperate flipper controller but use a cobra pin aux board, just finish initial test will wire up and further test in the next day or so.
first picture orginal followed by the 2 cobrapin pinball controllers
I have kept my orginal wiring as i really like jones plugs far far better than those JST / Molex types. 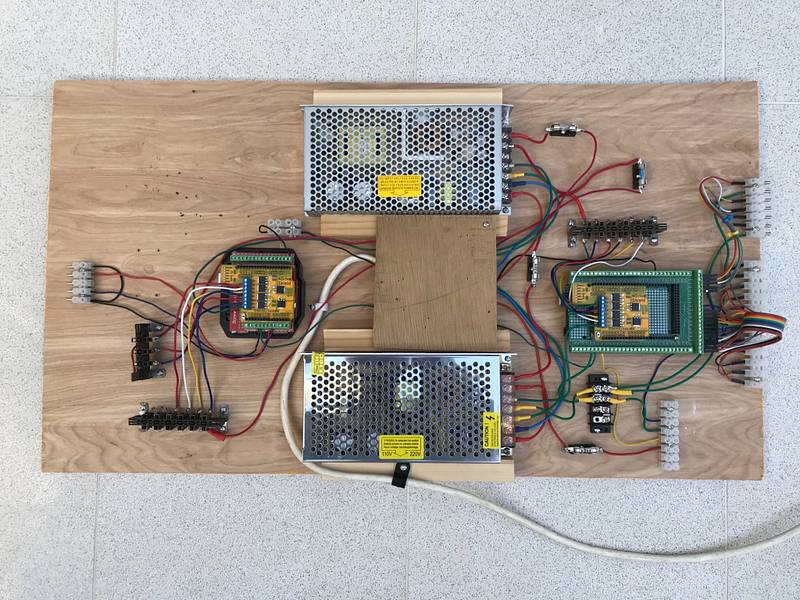 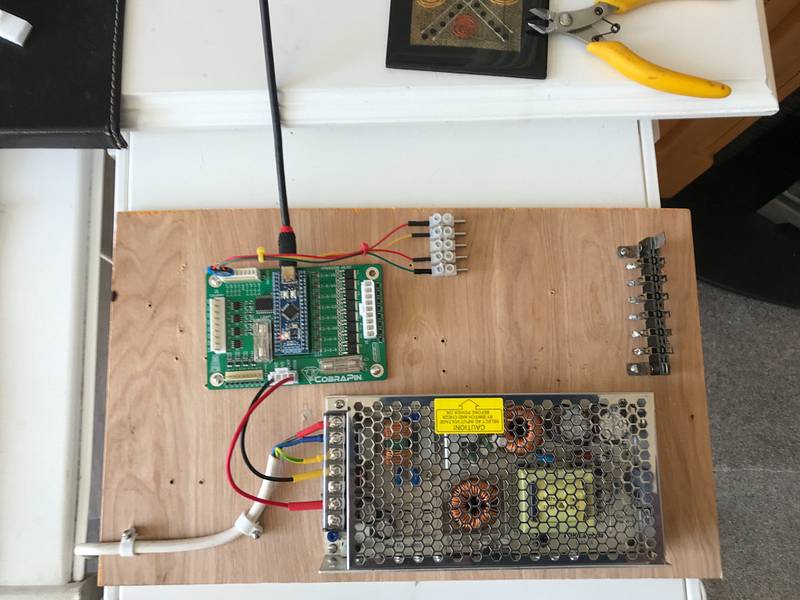 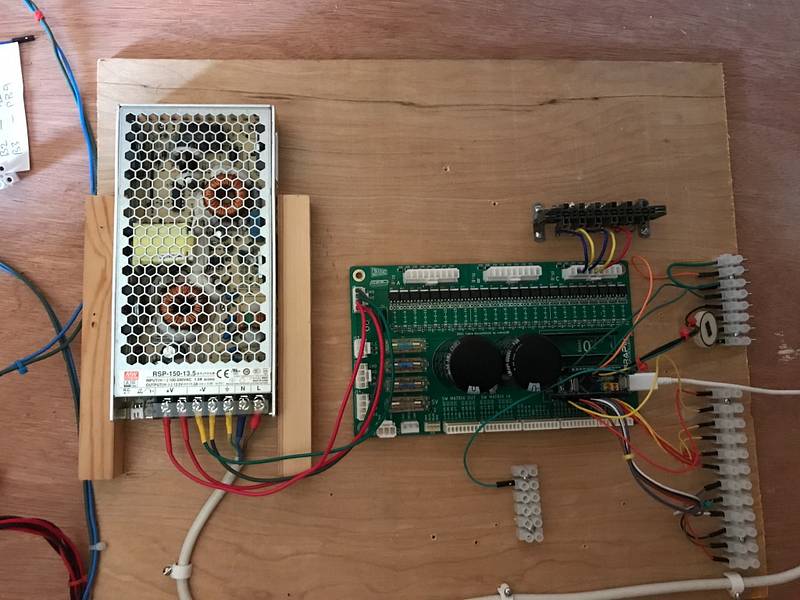 Update
Bit behind schedule but thats OK hope things will speed up. The cobrapin aux board now controls my flippers on Flying Carpet see attached. Flipper coils are from later gottlieb machines but i wanted a higher second coil resistance rather than the less than 10 ohms from the orginal. Using a 25 volt psu so plenty force on initial flip just adjusted the power down a bit. great to have so much control via psu and PWM settings. For the keen eye you will notice no EOS, i use 2 drivers per coil. I hate those tiny connectors so a temp solution using the arduino / raspberry fly leads, bring back proper connectors i luv jones plugs. I have used the stm32 as supplied by cobrapin no real problems except the dammed stm32duino bootstrap grabs the pb10 and pb11 pins. So as you have gathered i am using my orginal arduino code slight mod for pins on the stm32's. Next update in a day or 2 should be the main board finished wiring 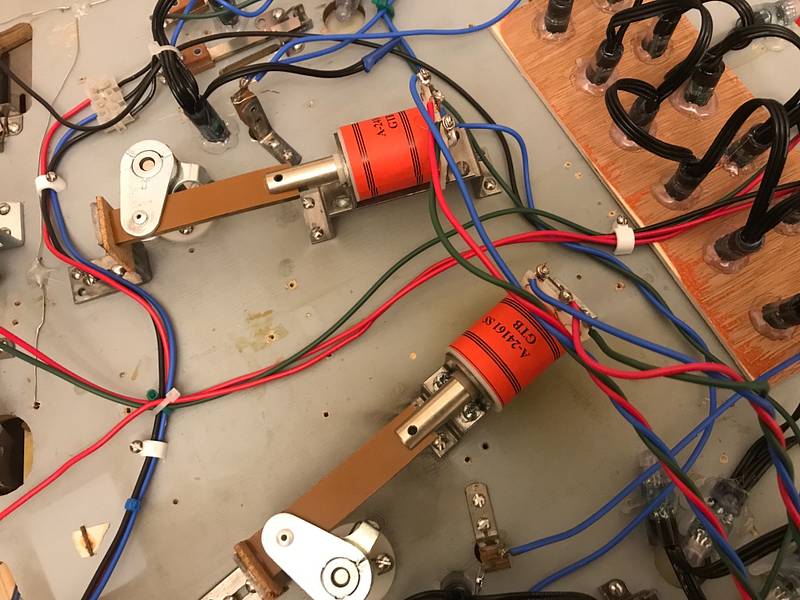 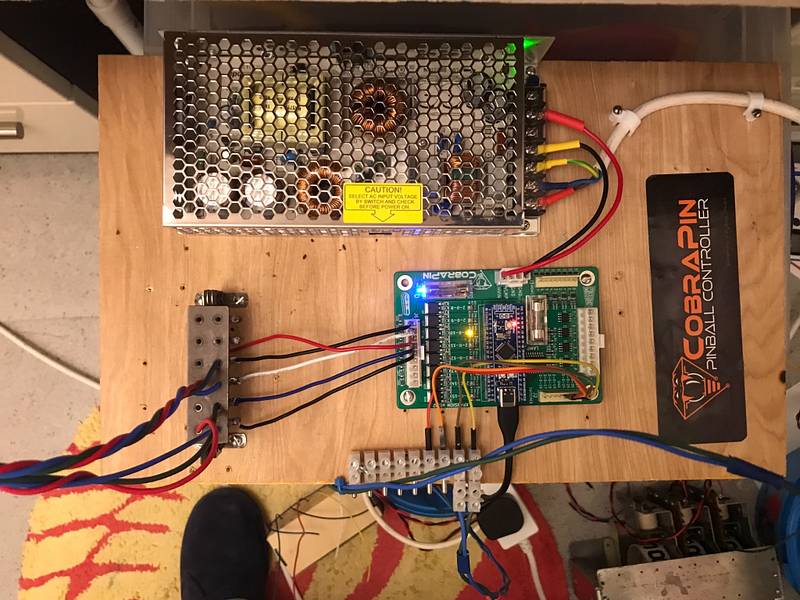 Update
Sitting in the garden sun shining what else could a man what? A fully working cobrapin controller pinball machine Oh to wish. Looks very like the cobrapin controller is now in its final layout just have the score reel coils and the knocker to wire up and test then into the cabinet it goes. The current cabinet is a home build, but i have a proper gottlieb cabinet and wedgehead which i have stripped ready to paint. Not sure about colours since i will have a flying carpet, duotron and a ball bingo that can be installed, the flying carpet will have a really backglass while the duotron and bally bingo will use my lcd tv and driven by a pc. Note i have used a battery backup so pulling the plug does no damage, machine closes down OK. Did some quite major reallocation of the software thinking ahead untill i get the duotron wiring completed. Had some niggly little led problems untill i noticed that it had a floating earth silly me. One interesting sideline when a pop bumper fires i have 3 coils firing at the same time score reel, pop bumper and the chime, when they all fired at the same time the score reel would sometimes not switch off strange i thought, so tried the old arduino mega solution and everything ok, but wait i had a 5 millisecond delay between the coils firing so tried it and all ok, not the solution i want, changed the firing times from 50 ms to 40 mills for the chime and 55 for the score reels and guess what all ok now, so switching them off at different times works well, well, well.
I am going to take some pictures and maybe a youtube video. Believe or not i have never posted a youtube video before. Again thanks to all off the guys and girls who have saved pinballs from wall art or even worse in the rubbish bin. (we brits call stuff rubbish not garbage).

update
photo of completed main cobrapin controller board.Jones plugs wired and tested. Have bench tested board, all ok including the flipper control board, sorted some stm32duino issues connected with non pwm pins
Outstanding list comprising off:wire up relays, knocker, wire chimes to 3 pin jones plug, refurbish remaining score reels and on the playfield finishing led lights, print plastics and touch up playfield. Cabinet, finish stripping and paint. Not really that much then i can start on duotron although playfield is completly refurbished. 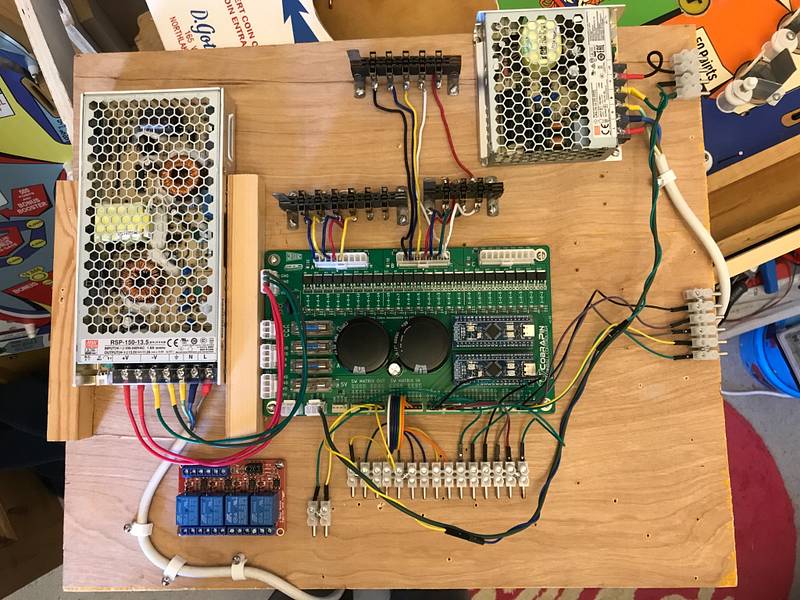 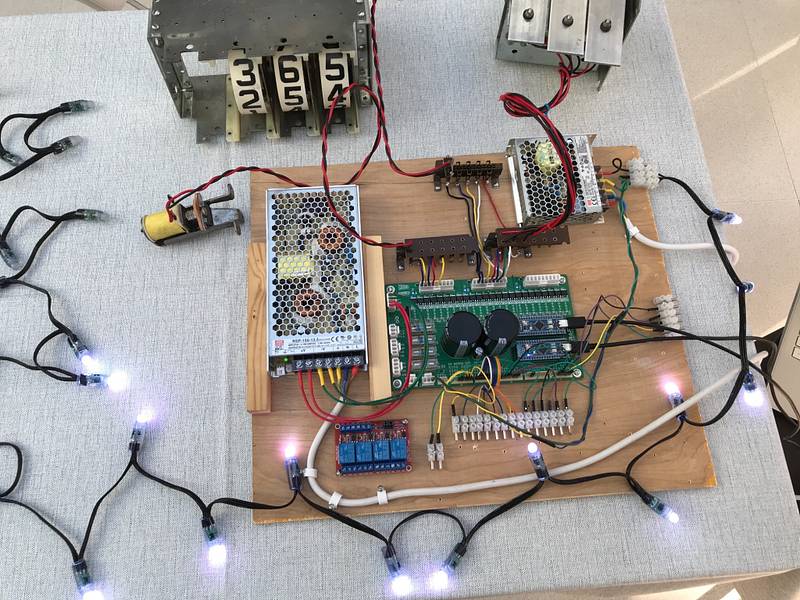 hi,
Flying Carpet is now FLYING. installed in home made cabinet, software seems to be ok now playing like it was when i used the freetronics and arduino config. Still cosmetic and a few more light bulbs to install. Biggest challenge is the plastics i need a good image for each of the plastics, i did use the orginal plastics as my templates for the new ones, all had splits and some were missing large pieces but my new scanned and laser cut ones seem to be ok fitted first time. Using my lcd tv setup still, starting the backbox painting soon have rigged up a painting booth so i hope it will not be too messy. Duotron next all the playfield artwork done looks great
Big thanks to the team that produced the Cobrapin pinball controller. Need to get some stickers. I am hoping to demo next year at one of the UK pinball events, will also show my brand new designed football (soccer) playfield, need to get started.

finished testing the diagnostic stuff for stuck switches and coils all ok. So next will be a video if i can master youtube. first one is of my attract mode all leds light in sequence then switch off not that entertaining but can maybe improve later. The second is an example of a switch stuck in this case it the E switch or target. Also you can see my homemade plastics awaiting the colour print which i have still to make. 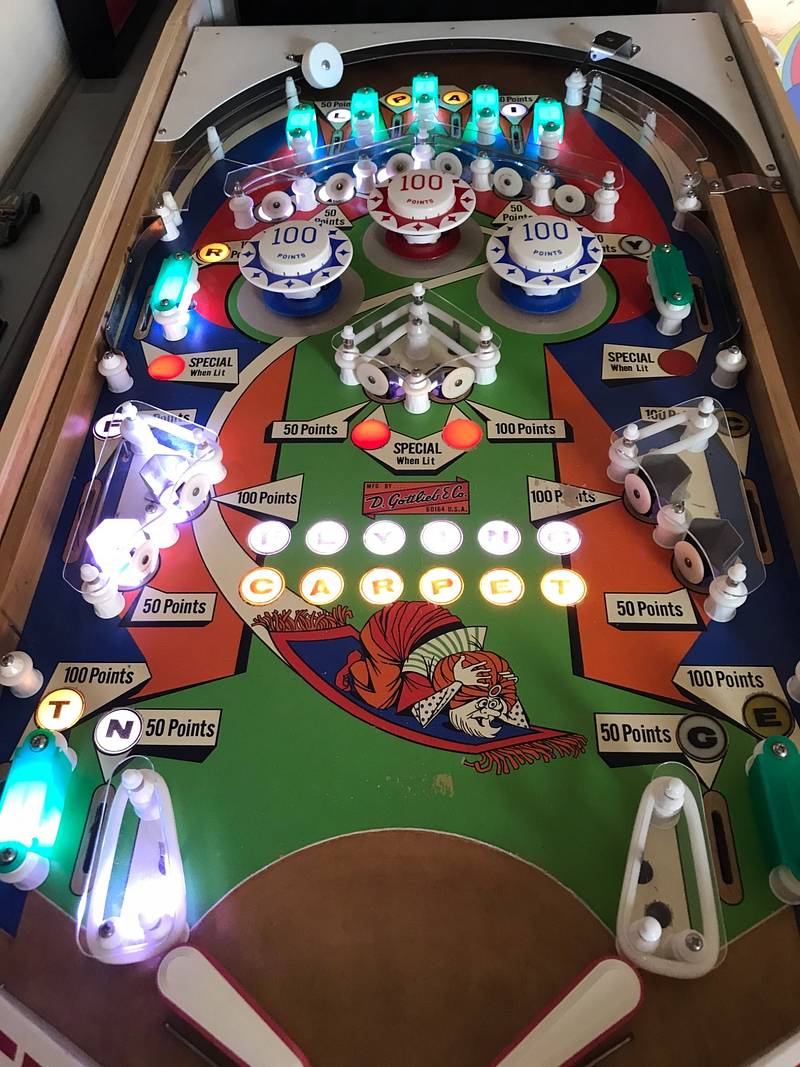 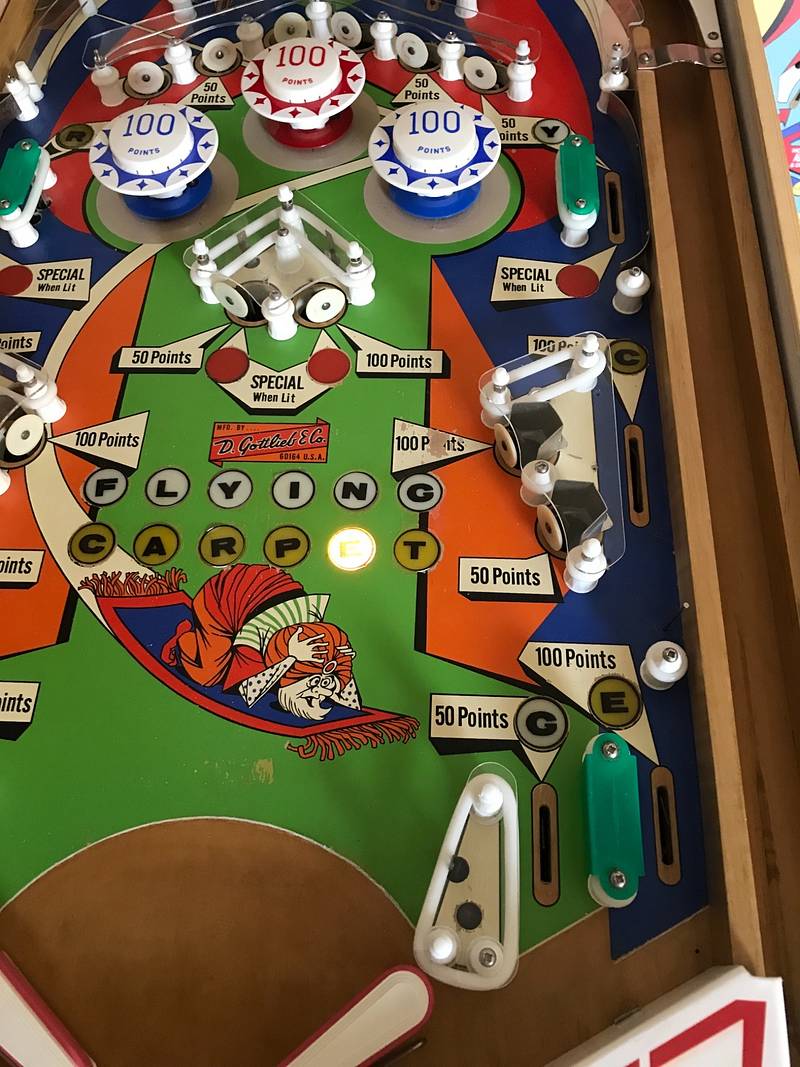 update
I have added the arduino code for cobrapin pinball controller for boards 0, 1 and aux board 2. Also the code to display flying carpet on an lcd tv with code running on a pc with the processing ide.
Stuff is on github
bjmclrn/Pinball
Any problems pm me

update
Flipper pin assignments sorted. PB0 and PB1 must be set as digital pins dont ask why they should be PWM. So now the flipper board can handle 4 sets of non EOS flippers. Still to finish code but will do that when i start my own pinball design. Must finish off my rockola world series and world fair jigsaw