If you're familiar with baseball you probably intuitively know where base runners end up after each base hit. But doing the computation with circuits is a little more complicated. Pitch and bat games often have base runners that mechanically move around the bases which is one way to solve the problem. Ed Krynski designed a series of games for Gottlieb in the early 1970s that kept track of base runners with circuits and lights. If you've ever played Baseball, Grand Slam, Playball or any of the other games you may have noticed how quickly the base runners have to change as you're playing.

The base runner circuit behind these games is a pretty clever and worthy of a little time if you want to boost your schematic chops. Here is a simplified view taken from Grand Slam: 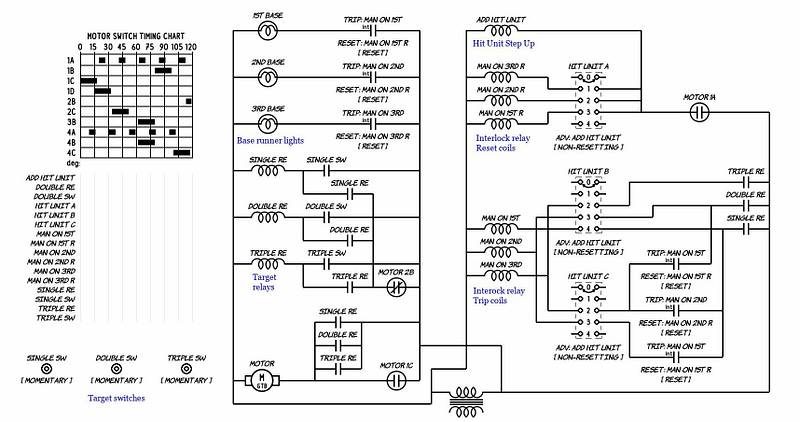 GrandSlamSch (resized).jpeg
I've animated this circuit and explained step by step how it works at:
https://www.funwithpinball.com/learn/gottlieb-grand-slam-base-runner-circuit-animation

Thanks for taking the time to break down and re-draw these circuits, Mark. I'm constantly impressed by the cleverness of these pinball engineers! It'll be fun to use your animated schematics to try to understand what's going on....thanks!

Wonderful break down of this Mark and great use of your animated schematics--thanks!

And I don't mean to hijack your thread, but Gottlieb wasn't so clever with their 1952 baseball themed machine Hit'N'Run. Like other woodrails of the era, replays on Hit'N'Run are won through a variety of means, including by scoring a number of runs. And like in baseball, runs are scored by advancing runners to home, but given the machine's circuitry, how runners advance (as I attempt to describe below) isn't completely in line with baseball's rules.

First of all, the backglass of Hit'N'Run exhibits runners on bases with lites; runners advance when a lit pop bumper is hit (these are lit by getting a ball in a trap hole that represents one of the four bases). This is all accomplished through the circuitry associated with a stepper unit that steps for each movement of a runner (for example, each time a lit pop bumper is hit). Every four steps of the stepper results in a run being scored (that is also exhibited on the backglass). ​However, given the circuitry of all this, only one runner can be on a base at any one time. And so although a runner advancing to first base can be considered to represent a base hit/single (or any other means by which advancing to first base is allowed--not going to list them all here!), subsequent advances to additional bases do not represent the result of a base hit (and so must represent one of the other plausible means to advance) given that when a runner advances from first to second, no runner then occupies first base (and same is true when runner advances from second to third and so on). The bumper caps do say, "1 BASE WHEN LIT," and so there's no specification about why the runner is advancing. This is all fine and follows baseball rules as long as the advancement of bases (except to first) aren't considered to have resulted from base hits/singles.

But here's the problem: The machine also features two roll overs on the sides of the playfield that score home runs. With no runners on base, a home run scores one run and this is accomplished via four steps of the associated stepper--lites representing the baserunner on the backglass move around the bases and the number of runs increases by one. This is baseball! But given how runners advance, you may already be guessing that home runs with runners on base on Hit'N'Run aren't the same as home runs with runners on base in baseball. Indeed, when a runner is on a base and a home run is made, the stepper advances four steps and so a run is scored but the runner advances back to the base that the runner was originally on.