Hello everyone,
I just picked up a Top Ten. This is my first pinball. It plays. But, it needs some care. I have schematics. But, I am looking for help with parts numbers, and a bulb list. I found rubber kits already.

I am also wondering about the switch on the record. I have noticed that it does not always register. Can anyone tell me about this switch? I am suspecting it is a hall effect type switch. But, I am not sure. I know you guys always say check out pinrepair. I haven't seen any switches like this on that site.

Pbresource will be your go to for EM parts, the bulbs should be 47's. Not familiar with title but check the switch contacts.

The switch doesn't have contacts.
edit: as far as I can tell. Which is why I suspect it is hall effect.

Spinning Post —
This is a circular, non-motorized plastic turntable that is inset into the playfield as part of its surface. On most games, two rubbered posts are affixed to its outer edge and 180 degrees apart from each other. This device remains static until a ball in play hits one of the posts, causing the turntable to turn on its axis either clockwise or counterclockwise and, in most cases, actuate switches under the playfield to score points and/or advance a bonus. Depending on the angle and force with which the ball hits either post, the turntable may turn only slightly, not at all, or spin several revolutions until it slows down on its own. The spinning surface may affect ball trajectory only slightly, as the ball is more affected by hitting the posts and deflecting away. Compare this feature to the Spinning Disc.
A variation of the above design, aerial spinning posts, uses no turntable. The two posts are attached by their tops, one to each end of an aerial support that spins around its central axis whenever the ball hits either post. Two examples to have this style are Playmatic's 1974 'Joker' and Premier's 1995 'Mario Andretti'.

A list of all games identified with this feature can be found here.

Info from IPDB, Top Ten included in this list.

Thank you. I do suspect I have a low voltage issue at the switch. When I manually trigger the switch there are times I can hear the scoring relay, however there is no score added. The voltage I am seeing is around 2.5v DC. I have not dug into this very deeply yet. I'd really like to understand how this switch works first.

I will try to get a good picture of it.

When I spin the record looking down from the top of the play field it almost looks like this maybe an optical switch. I’m not sure if that type of technology was used. Something inside the plate stack appears to trigger or “blink” as the plate attached to the spinner moves past the plate. 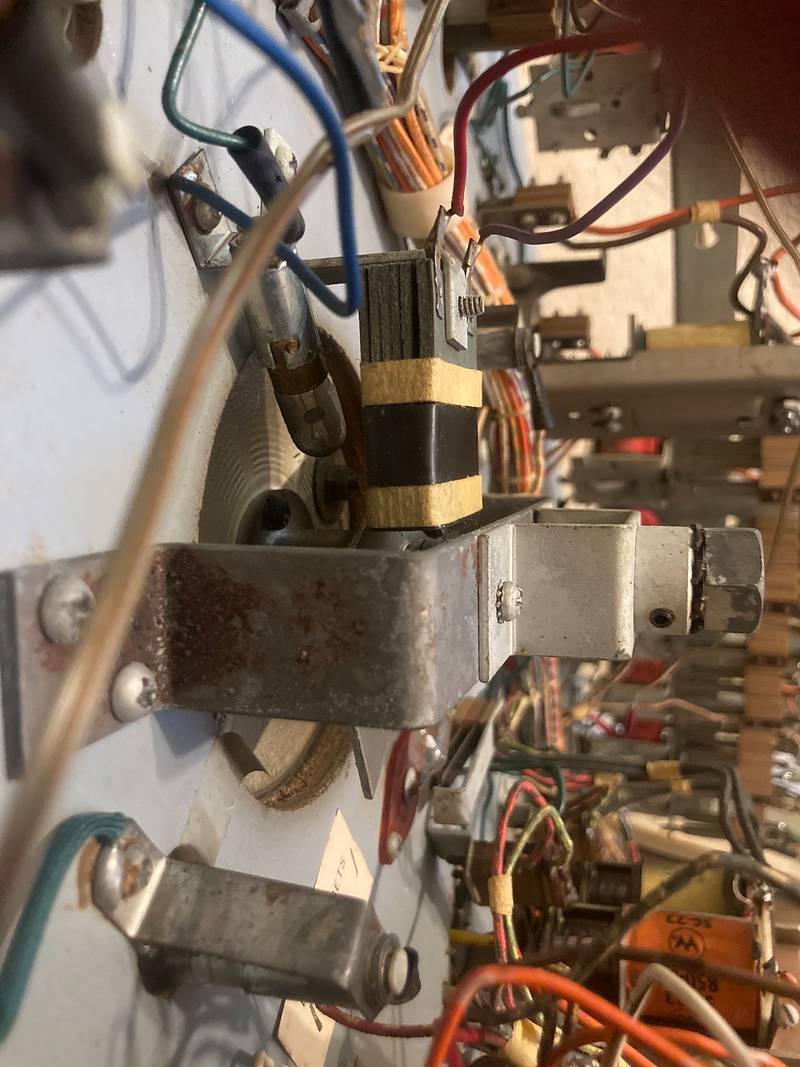 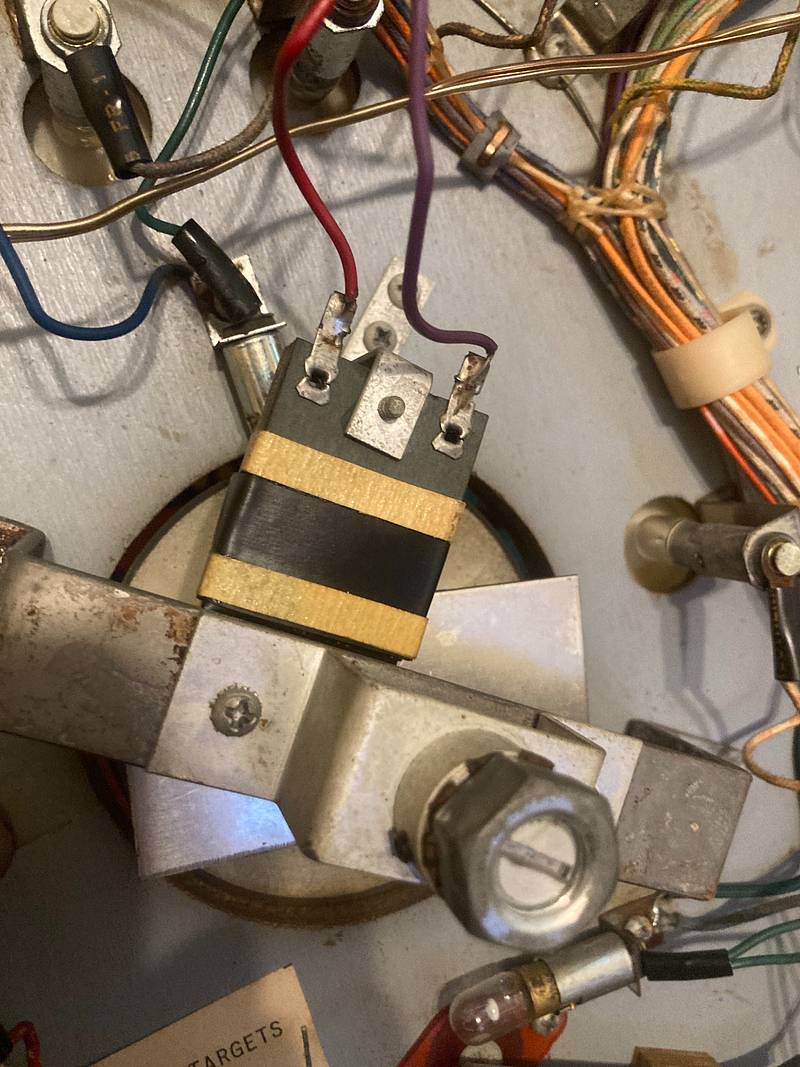 I have not seen this before and had a look at the schematics. Looks to be a 'Photo Cell' which is interesting. 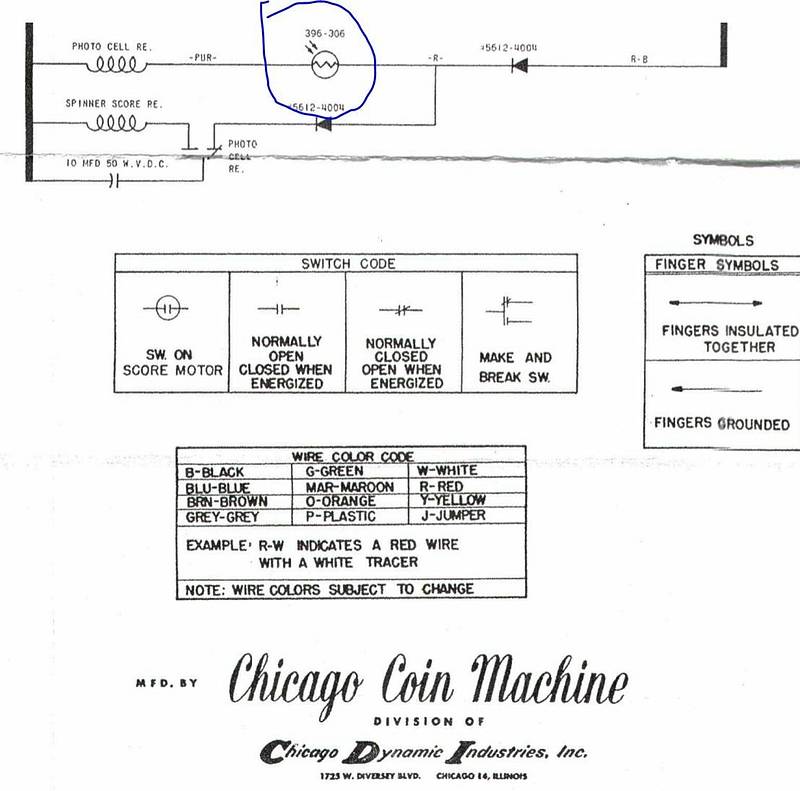 Very clever and interesting. I was surprised to find a transistor in an EM game (https://pinside.com/pinball/forum/topic/transistors-in-em-games). A photo cell is equally surprising.

the photocell lamp should be a #47.

when the bar is blocking the light, the photocell relay should lose power, so that's the simple test for operation.

the circuit is interesting:

1] photo cell relay unpowered, the 10mfd capacitor is charged up

2] photo cell relay powered, the capacitor is connected to the spinner score relay coil and that relay powers for as long as the charge in the cap lasts.

if your photo cell relay seems to behave reliably, the most likely problem (besides cruddy switch contacts) is the 10mfd capacitor. The diodes are all 1N4004's ... you can use 4007's if you have those.

the pacific pinball museum does have the manual. I uploaded it to ipdb ... until it shows up there, you can find it in https://bingo.cdyn.com/ppm/

Thank you for your help. I am glad you were able to confirm that it is a photo cell. This will give the information I need to hopefully dig in a little more. I have spent the last few hours learning about EoS switches, and trying to adjust those. As I have been playing the spinner appears to be counting more accurately. I am almost suspecting it may have been dirty.

Today is only my third day owning this thing. So I really don't have anything. I will add a few diodes to the list of parts that I will be looking for.

I will take some time tonight to read the manual! Thank you very much I am excited to see you were able to locate this for me.

This manual has led me to a few new questions.

What does the match adjust on page 1 do? In the schematics it appears to only turn on a light bulb.
I also do not understand the right chute, and low-score high score adjustment settings. What do these do?

Lastly, at the top of my backglass there are lights for 00-90. I am assuming these are controlled by the by the stepping unit on H1 of the schematics. When do these lights turn on? My game counts the 10s places accuretly, but I have not seen these lights work. Perhaps I am mistaken about their connection.

Ah Chigaco Coin Machine...
I thought this would be a top ten list of pins

match is winning a free credit if the last two digits of your score are the same as the two digits that light up on the backglass after the game is over.

the adjust plug for match is on/off, and it needs to be in the on side of the socket for the lights to turn on at game over.

internally, the match number is selected by the 00-90 unit, and that unit steps whenever either of two playfield rollover switches close. You don't see what two digit number it's selecting until the game is over, and it's a pretty good bet the numbers don't go in sequence so people couldn't count the number of rollover switch activations.

if you want to see the match number sequence, manually step the 00-90 unit after the game is over and watch the lights.

"chute" is referring to the coin chute(s). You may not have more than one, but a typical game had two and you could configure them to give different numbers of credits for a coin. Typically it'd be something like one chute is 10 cents and the other is 3 plays for a quarter in the USA.

high score adjust is winning free games for getting certain scores. It's also adjustable whether you get a credit for reaching a score or an extra ball. Below I'll just say credit to mean either.

the details of the score setting socket at the top of page 1 gives an example of putting the plug with the red wire into the 1000 position of the socket. That'll give you a credit at 31,000 or 131,000, depending on the position of the high-low score adjust plug.

Thank you again. Your response have given me some clarification. I would not understand that without your explanation. But, I’m starting to see how that logic works.

The unit is stepping properly. I did find one broken solder joint on the spider side of the board. And a wire that appears to go to no where. Needless to say the lights do not come on. But, based on my observations I would say your assumption is correct. You can count the Outlane triggers to predict the machines value.

Hopefully this week I can get this fixed.

it's probably not the outlane rollovers that step the 00-90 unit. I'd bet on ones at the top of the playfield since a ball almost certainly will go over ones that step the unit a few times in a game.

for the high score adjust, you plug multiple wires into the socket to get 2+ score levels that give credits. Often you only have the score card that's in the apron, so you configure it to match that unless you want to download/print repro cards (http://www.pinballrebel.com/pinball/cards/)

I say outlane roller because the first trigger in the schematic is the outlane relay. Am. I understanding that incorrectly?

I say outlane roller because the first trigger in the schematic is the outlane relay. Am. I understanding that incorrectly?

do you mean the outhole relay switch at schem 1E?

below is the circuit for stepping the 00-90 unit (powering the step up coil). Only thing in the circuit is "(2) playfield roll-over switches". You'd need to look at the rollover switches and see which ones have a green and grey-orange wires on a normally open switch.

Ah Chigaco Coin Machine...
I thought this would be a top ten list of pins

do you mean the outhole relay switch at schem 1E?
outlane = the side channels the ball can go down that end the ball in play
inlane = the channels next to the outlanes that return the ball to the flippers
below is the circuit for stepping the 00-90 unit (powering the step up coil). Only thing in the circuit is "(2) playfield roll-over switches". You'd need to look at the rollover switches and see which ones have a green and grey-orange wires on a normally open switch.
looks like the schematic shows the match number sequence the 00-90 unit produces - 00, 70, 20, 50, 90, 40, 10, 60, 30, 80.
[quoted image]

I was indeed referring to the circuit on 1E that begins with the outlane relay. I will look at the playfield for the wires.

It may not make the top 10 list. I wanted a pin that I could play, and learn to work on at the same time for a reasonable cost. This does in fact meet my requirements. So it is number 1 on my list

It may not make the top 10 list. I wanted a pin that I could play, and learn to work on at the same time for a reasonable cost. This does in fact meet my requirements. So it is number 1 on my list

That's all that matters, I totally get it. That being said, CC EMs are a bit tougher to learn on than those from WMS, GTB, Bally... just a bit different and not as much documentation on their circuitry; All the best.

Marcos has FJ-21-375/29-400 is this the same coil I need? My coils have loose or broken winding I will be replacing the flipper coils.

Currently, gotlieb coils are on the flippers. They are both weak. The left flipper low current circuit was open due to a broken winding.

I may be able to reuse this one. But, I do not believe it is the proper coil. Please don’t lecture me for cutting the wire. As you can see the insulation was pretty burned on the orange one anyway. And, I’m not an expert at soldering or desoldering. I intend to use this for practice. 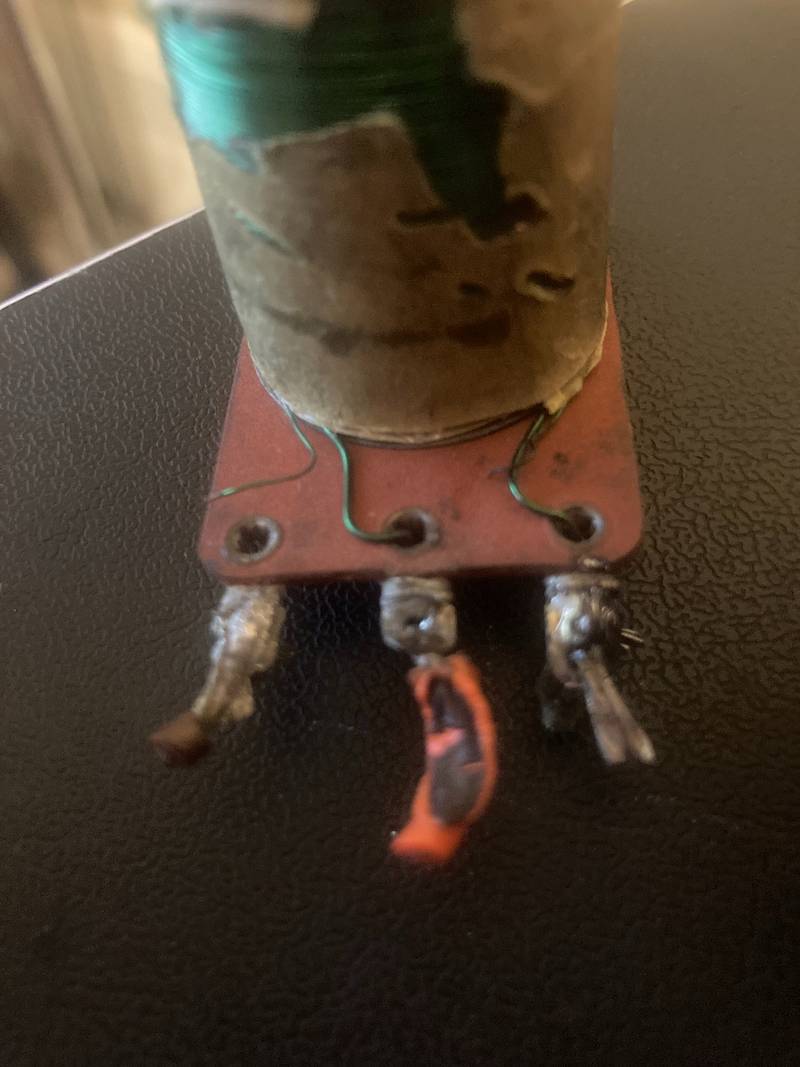