How about yours?
If I open the coin door, my cats appears nearby immediately... 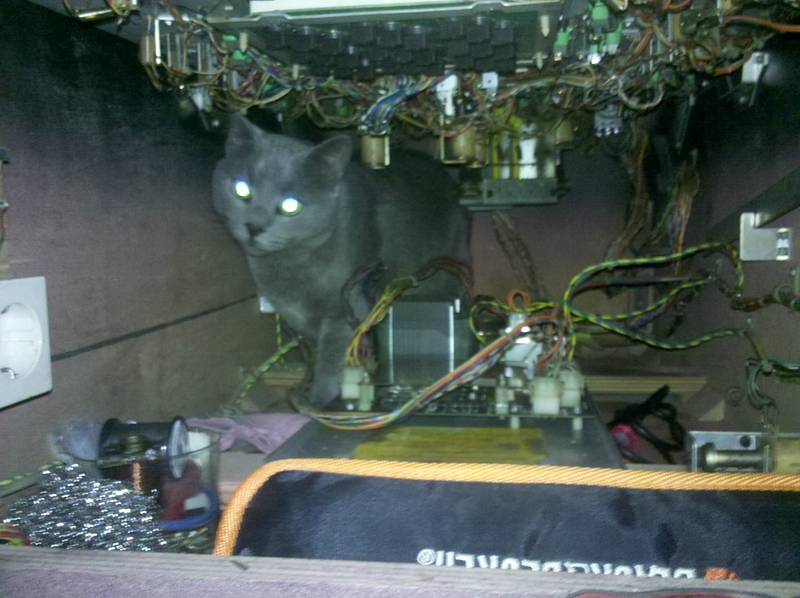 Nice! Put a rag around them and let them do the cleaning. 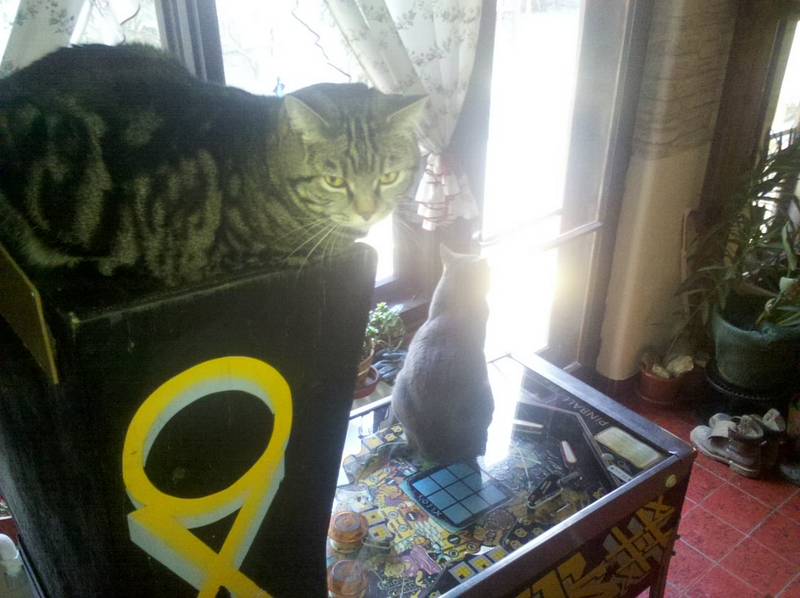 I wish I could have a picture of the first time the PF is lifted up and they jump into expecting the glass to be there.

And,of course the glass is always full with footprints...

LOL!!! There was a post on here before about cat toppers (I posted a pic of one of mine on MM complete with the glowing eyes!!)...I have 3, and they all like to sit in some form or fashion on them...The youngest actually loves to play his favorite is Cyclone, because of the clear curvy ramps...he also likes Taxi, and Bad Cats...Well really anything that he can get on the PF glass when you are playing and chase the ball around. He will be 3 in May, and he is starting to get lazy...but every once in awhile he gets the bug and will stand up on the legs of a pin and meow at me till I turn it on and play a game with him.

One other one loves to sit on the top like a topper, I think because that puts him higher than everyone else and he can keep an eye on everything going on... But pretty much anymore they are just good napping spots!!

As I type, 1 is on Comet sleeping on the PF glass, and 1 is on top of TF's I keep waiting for him to fall sound asleep and roll off the top...I will probably pee myself laughing at him when he does!!! 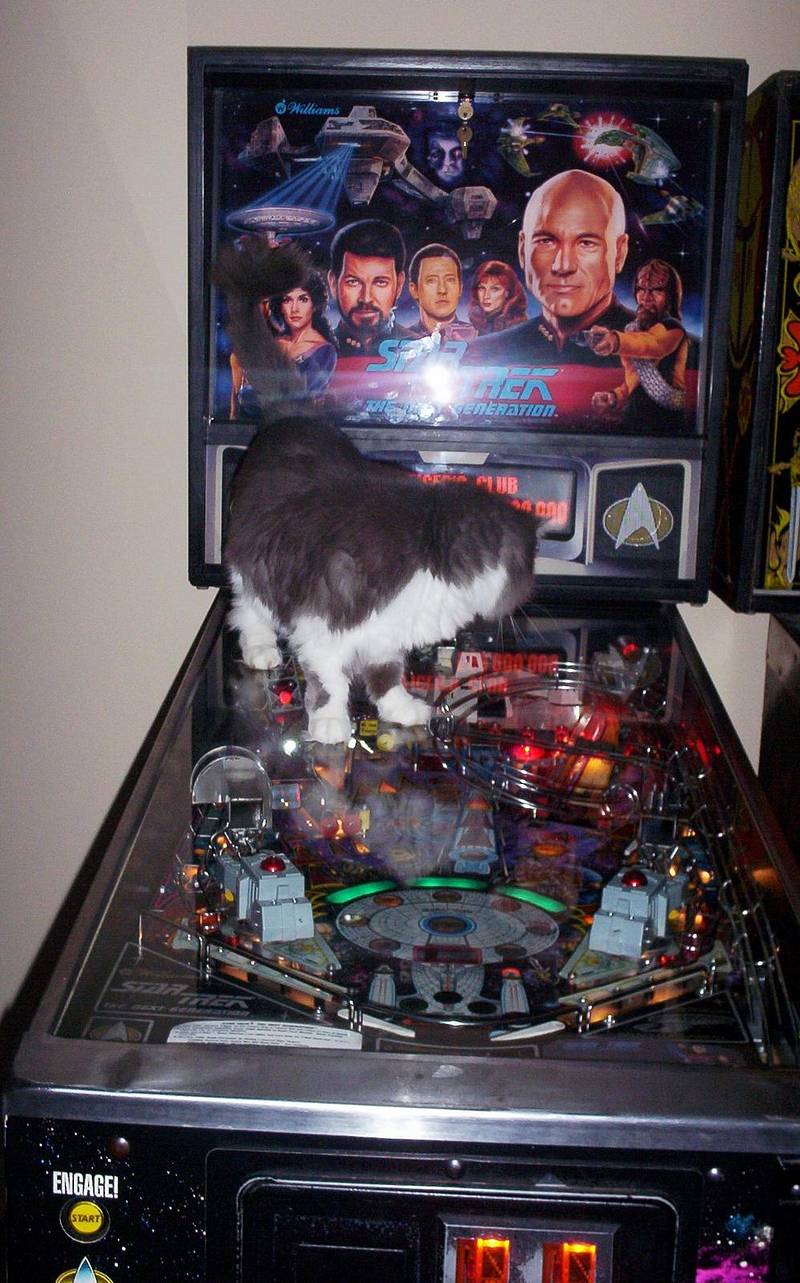 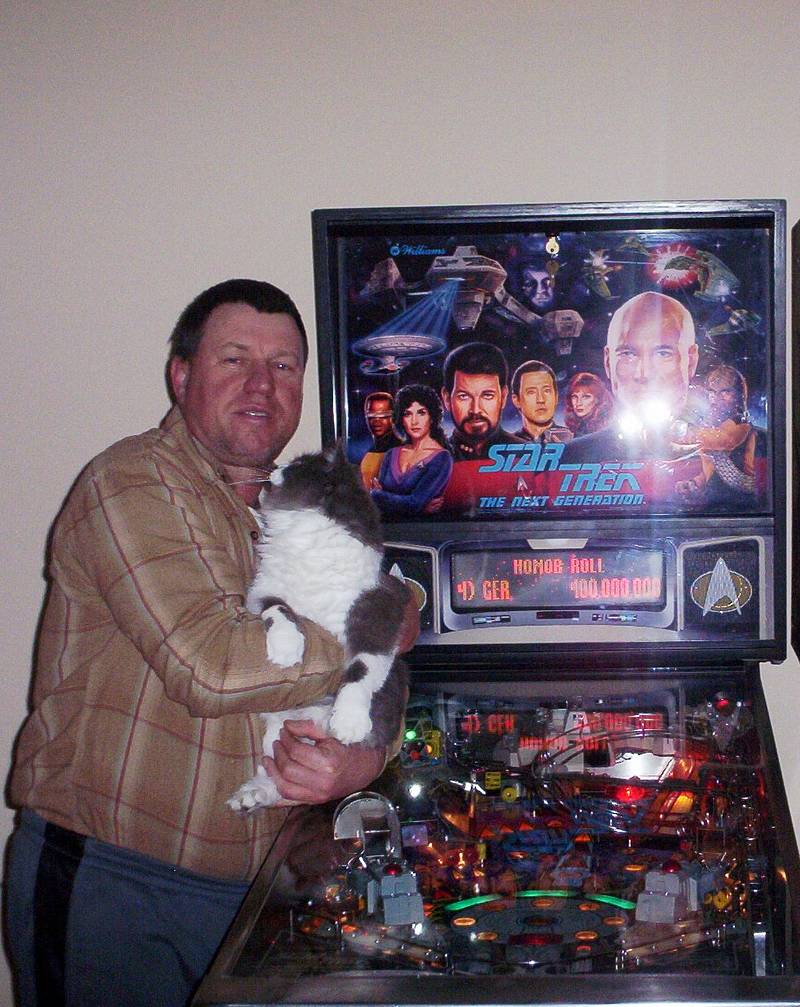 If I open the coin door, my cats appears nearby immediately... [

I know what you mean, if i have to do something and open either the coin door or playfield they are always jumping inside there. Im afraid they are going to pull a wire or something worse. stinkers

Nice cats!! Your machine is gettin a tan with all the sun it gets....ouch! Need some curtains or better location!!

Then post them,cats are always looks funny on pictures...
And yes,Butterfly, they like to be on the top... Playind the dictator fron there...

Thanks, Mojozone,but the camera is cheating... No direst sunligh touches the pinball...

Just i take a photo with a mobile...

My dog doesn't climb on my machines

Please don't let your cats get zapped inside the machine. They could short something and both your little kitty and your machine could be in trouble. The first time I was working on my machine, my cat jumped into the coin opening. I had to quickly get her out of there. Later she jumped up onto the playfield which scared the crap out of me, especially since it was a NIB that had hardly been played.
My cats have learned to not mess around too much when I am working on the machines. They just like to lay around near me.

Angyalpor, you should see some of the cats in America. They tend to be very large here.
I was watching a TV show about cat history, and they said as soon as cats were brought to America they got larger very quickly.

Fortunately for me, my two fur balls are medium-small at around 10 pounds. It is much easier to keep them healthy when they are not too heavy. I spend way more money on my cats and their health than I do on my own health.

Nice pusses!
Please don't let them go inside a powered up machine.

They give playfield toys a whole new meaning.
I used to always keep my bag of "catnip" locked in one of my machines.

Id really advise against letting your cat INSIDE your machine. Even if the machine if is off he could short something or discharge a capacitor then instead of a pin that smells like a bar its roast pussy cat. Ever see national lampoons christmas vacation?

I never let them to go inside,just sometimes I'm not too quick.

I'm afraid,they shocked,or lick a capacitator... Even the machine is turned off. When it's on,never let them go in! I don't like rosted cats...

Dcfan,they are 6 and 7 kilograms, and of course,pet doctor and food are more expensive,then my food...

Looool had a good laugh when you turned the game on...

Come to think of it this isn't a bad idea for a leftover cabinet. That's one fancy cathouse. I'm getting a new cabinet for my CFTBL. Kitty just might get a new home.

Come to think of it this isn't a bad idea for a leftover cabinet. That's one fancy cathouse. I'm getting a new cabinet for my CFTBL. Kitty just might get a new home.

Not cheap, but soooo trendy.

I have a Nudge it cabinet, that a friend gave me...and it is destined to be a cat house in its future!! His kitty has one just like it...It is custom for each kitty, and the BG is pictures of the kitty. It still lights up and everything...

IT is really cool...I need to get it out of storage and get it made... 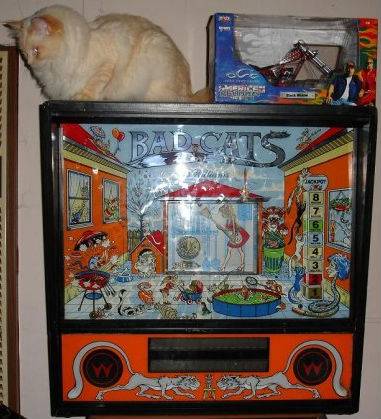 Nice! Put a rag around them and let them do the cleaning.

this made me LOL.

These Sega's are nice and warm, and those toppers are annoying anyhow 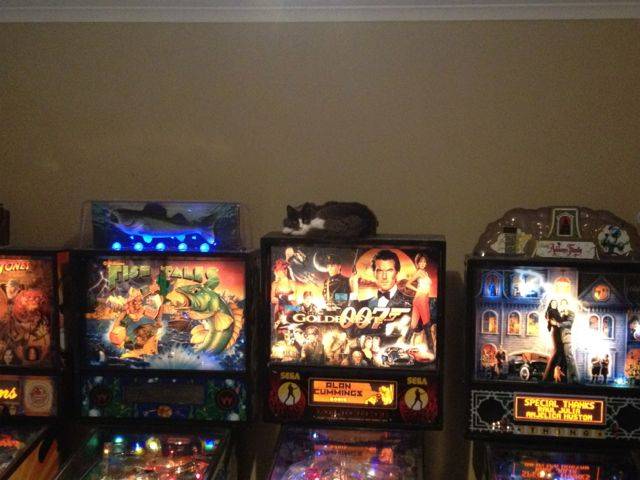 I see my cat is not the only one who likes the top of backbox. See Avatar picture.

I see my cat is not the only one who likes the top of backbox. See Avatar picture.

he having a good old snooze, looks comfy

This was a cat we used to have. The cat we have now couldn;t care less about the pins, LOL. 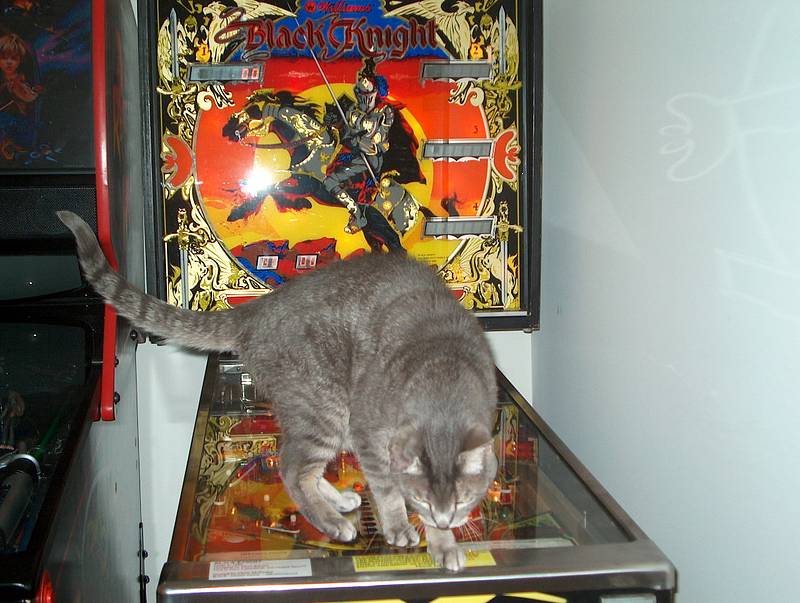 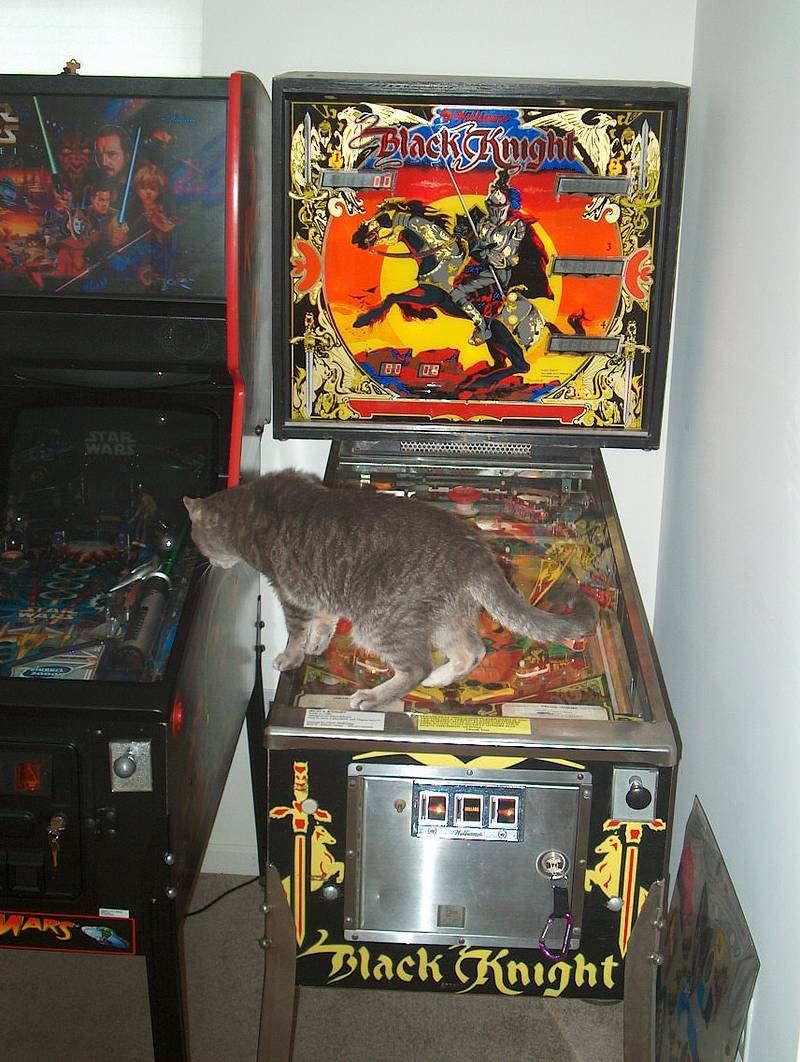 All 4 of my cats make appearances when opening the coindoor

They love the tops of my games also. No pictures yet of them in the act but here is a generic kitty pic.

Here's just one of many of my cat crawling in the pins pictures. This is Harvey inside of what I think is the EM. Charlies Angels machine. 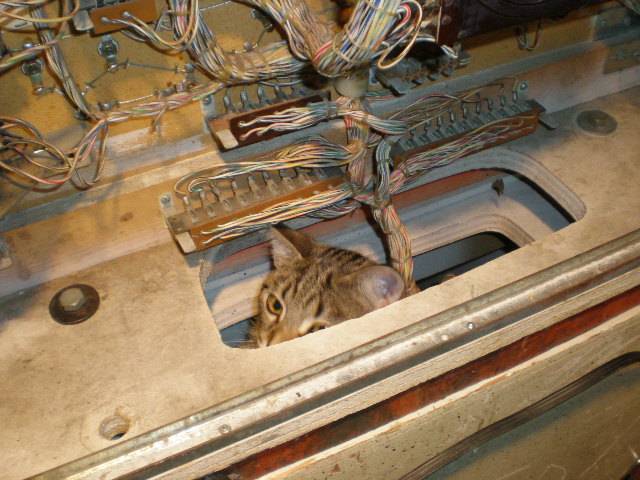 I was working on my Creech a year or two ago and all was fine and I turned the game on. Suddenly it was slam tilting and I opened the game to find out why. Suddenly, not one, but two of my young cats walk out of the machine. I had only had my back turned on the machine for 1-2 minutes earlier, but was apprently long enough for them to slip in.
I have one cat who every time she sees me open the coin door wants in. But I won't let her as I'm afraid she might mess something up or worse, become a fried cat!

If I am shopping a pin it is always unplugged so my cats and I don't get zapped.

All 4 of our cats are sneakers, so when I turn my back they always go for the coin door when they are open or if a head is off on an EM they will make their way into the Cabinet that way or just run a direct route and jump into the Cabinet when the Playfield is up.

I cut pieces of scrap wood in different sizes with handles to use as a block when the Head is off a machine I am working on for an extended period of time to keep the little buggers out as they share the arcade with the pins, or visa-versa according to them.

I do not let them get into a machine intentionally but if they are successful they sometimes leave behind a broken wire or a switch or two out of adjustment, but always plenty of fur to vacuum out which is a pain.

Here is a cricket team trying to move my fat cat

mine likes to play with the old flipper rubbers

The image is even to fat to load

My cat would get on top of a pinball machine, but he doesn't move much these days. 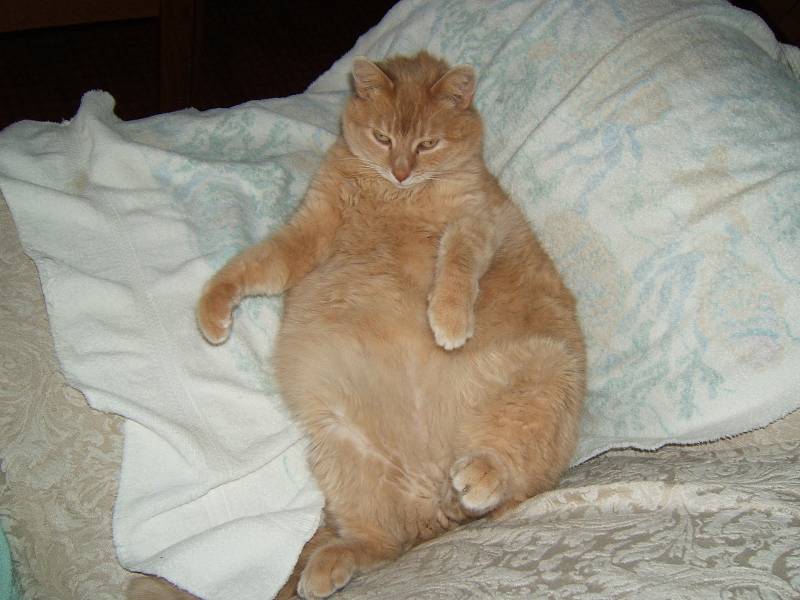 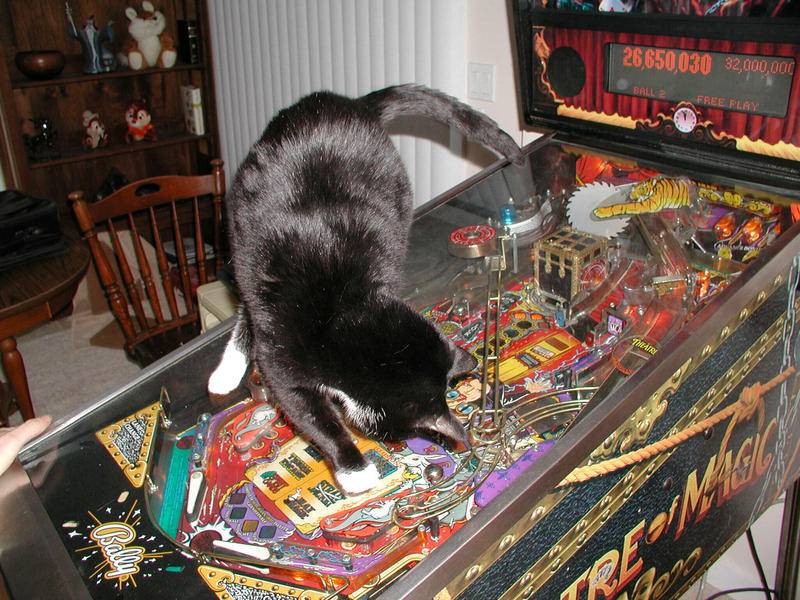 The first pic is so good, he is like so "busted". BTW you are not selling me on getting cats,dogs hanging out under my pins is bad enough. So happy they do not make pinball machines legs wood or I would be screwed.

I see I need to grab some pics of my cats on the machines. One almost always comes as soon as she hears me playing. Normally she like to sit on the one next to the one I'm playing and watch. Often she will end up right on the machine to catch a closer glimpse of the action.

I sold a Tomcat F-14 to the father of my brother's GF at the time.

Later on at his house he opened the coin door for a reason I can't recall. The dude left it open for some time, got sidetracked & later unknowingly closed it with his cat inside.

He then played several games with my bro. Once it was powered down they heard a noise, opened the coin door & the cat bolted out!

The cat does not like the pinball machine now.

I would imagine it was loud & insane in there with the flashing lights, speaker & metal parts slamming around while the machine was nudged.

It's a bonus the machine was a Tom Cat too 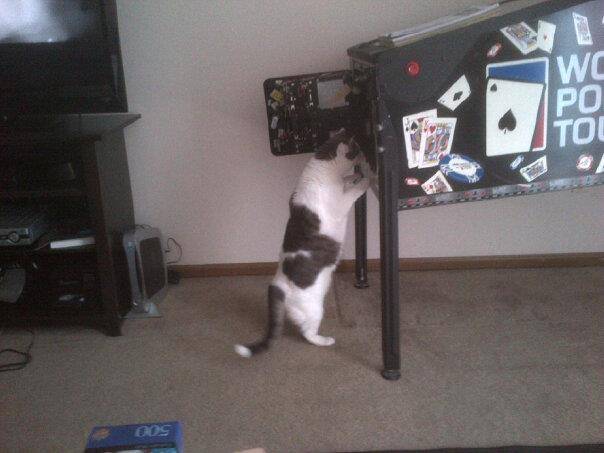 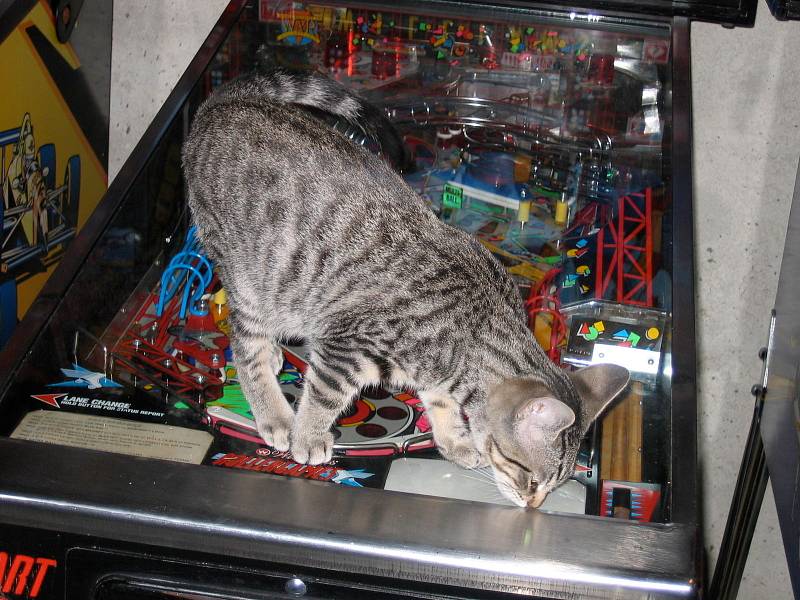 That looks like one of those pictures you'd see on ICanHasCheezeburger.com that would be captioned something like: "Don't Worry, I can fix this!".

these rules need to CHANGE! 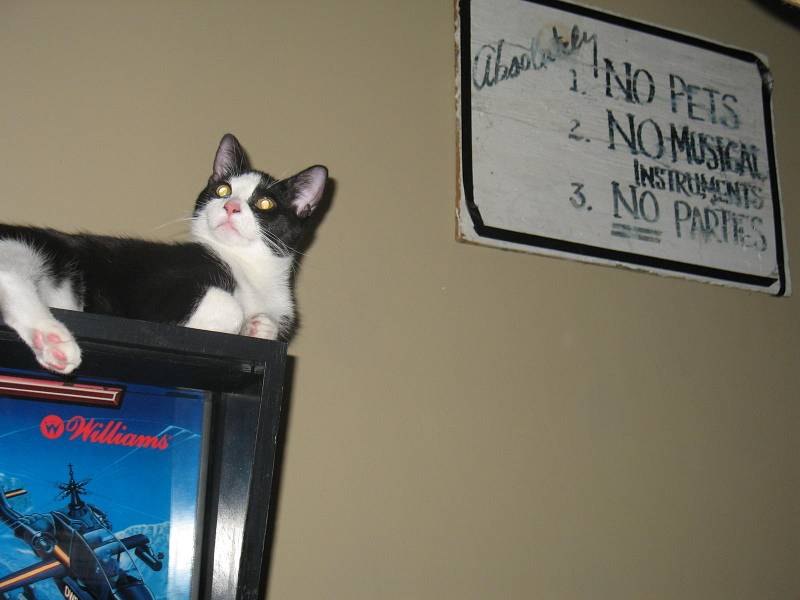