Can you recommend some games like Flash Gordon and BSD

These two games really butter my biscuits. Can you recommend any games that have a similar vibe? Long balls and deep rules can be tough for me. I like quick thrills!

I'd suggest Funhouse. Difficult and great humor. The wife would have 45 second games meanwhile bsd games were at least 2 min. Lol.

Fishtales would be a great choice also. Similar to bsd in locking balls during multiball but can have very short games.

If Flash Gordon is your jam I'd suggest Elektra if you can find one. Medusa would be another great choice.

Paragon. Learn to respect the gap.

Paragon. Learn to respect the gap.

Paragon is a truly great and misunderstood game. It is hard. It will teach you to post pass and tap pass.

Paragon is a truly great and misunderstood game. It is hard. It will teach you to post pass and tap pass.

It will test your reflexes.

If you can find a used Beatles, check it out. Fast and fun game.

If you can find one, "Godzilla" from Sega has a similar multi-ball stacking like BSD. That game has 5 different multi-balls to stack.

LOL,
I have FG and BSD next to each other.
For DMD games my take would be TNA, IM,Tron, Avatar, I500

The best of all time!

TWD, by far, the meanest of the bunch. 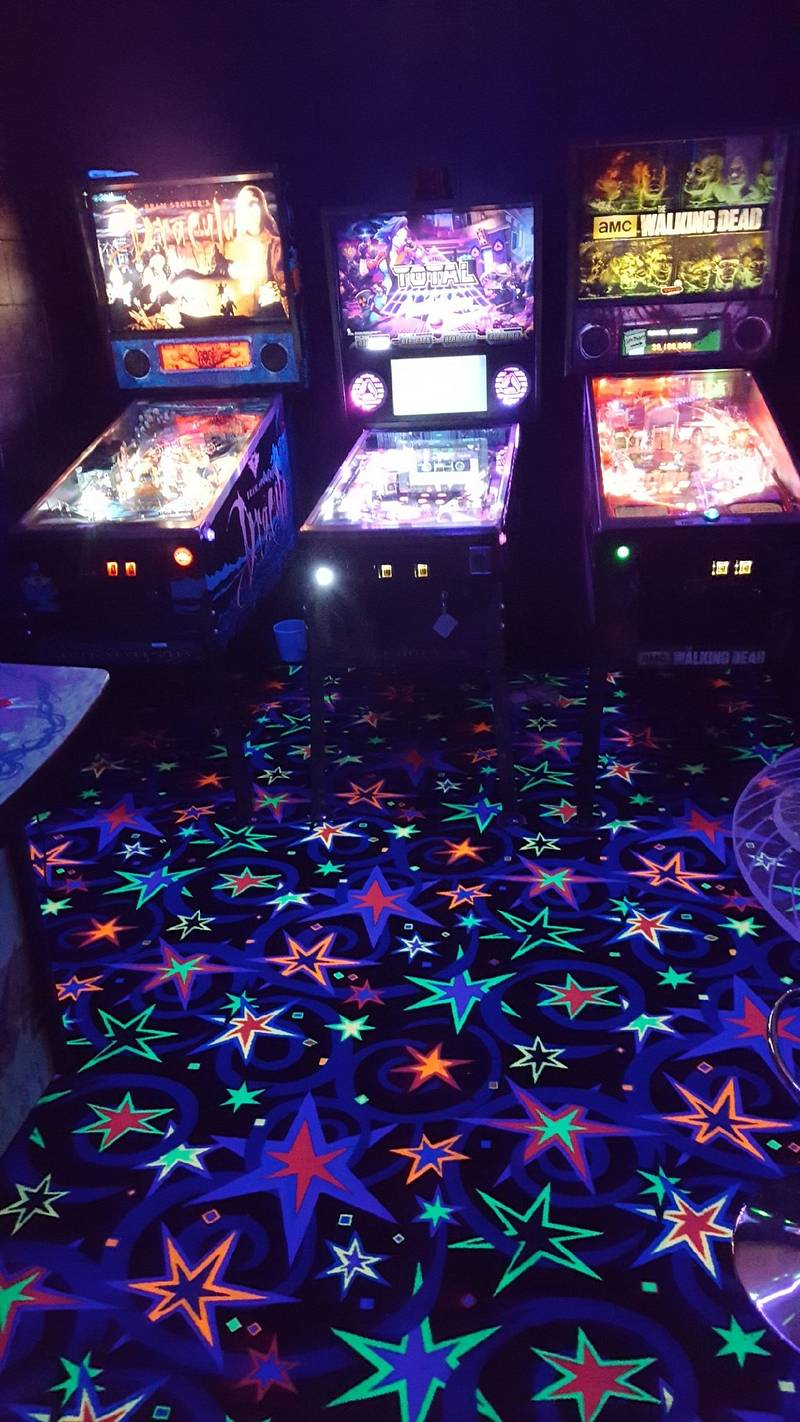 Are you opposed to EM games? I'm a fan of 2-inch flippers, and games that have been waxed up and have the rear legs cranked up a bit more, they can be real fire breathers. 2001 is among my favorites. Though once you get the "float" out of any EM, they're all great players.

You should really open yourself up to some wedgies. They’re much cheaper, than some of the other titles mentioned. Also when non people would come over that’s what we would play. They’re equalizers, people are drawn to them. Here’s proof by example of the games in our actual gameroom 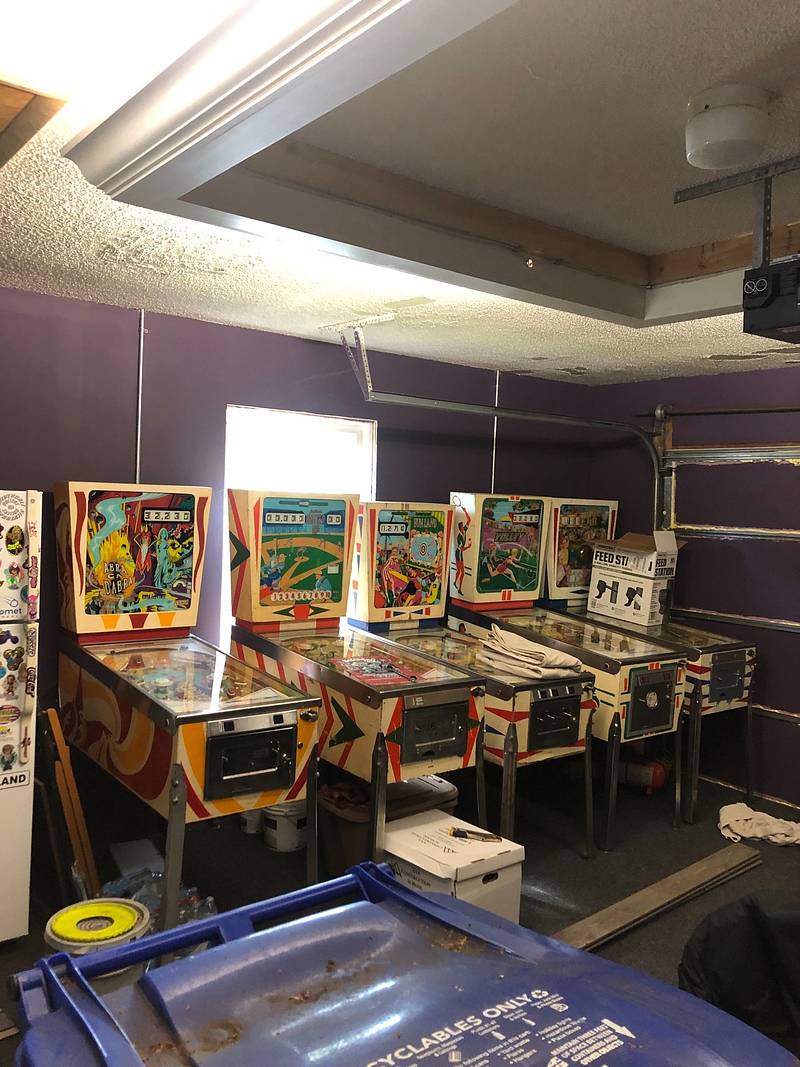 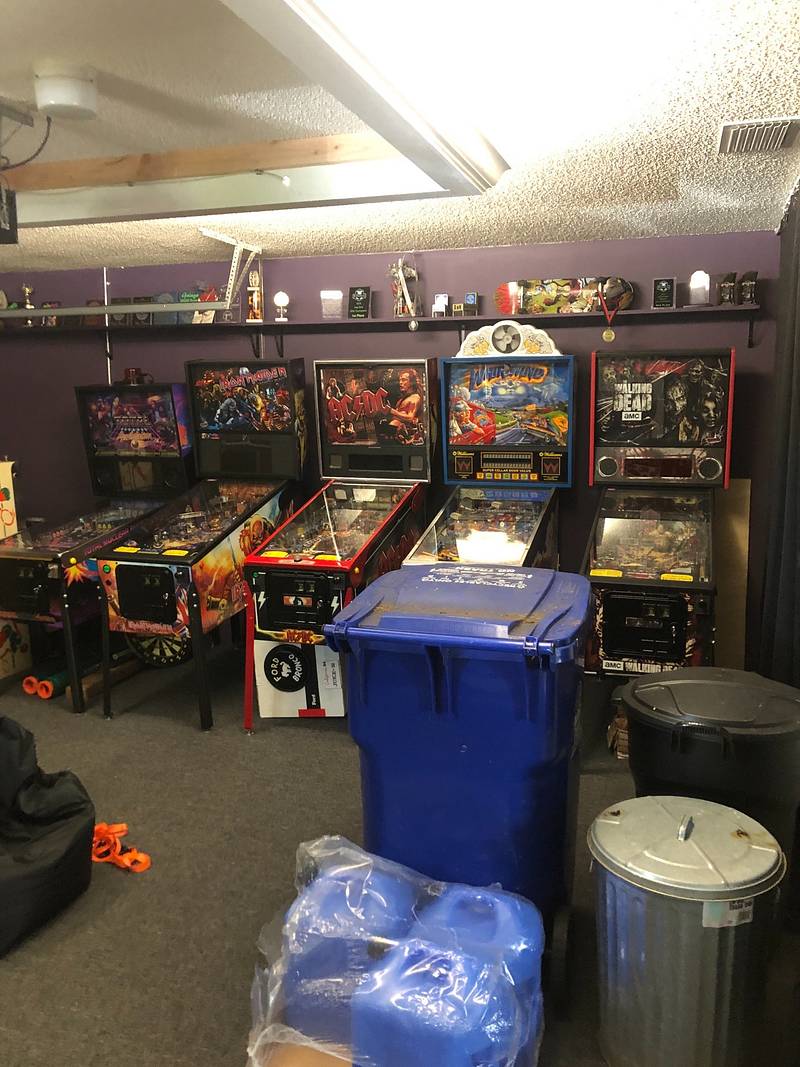 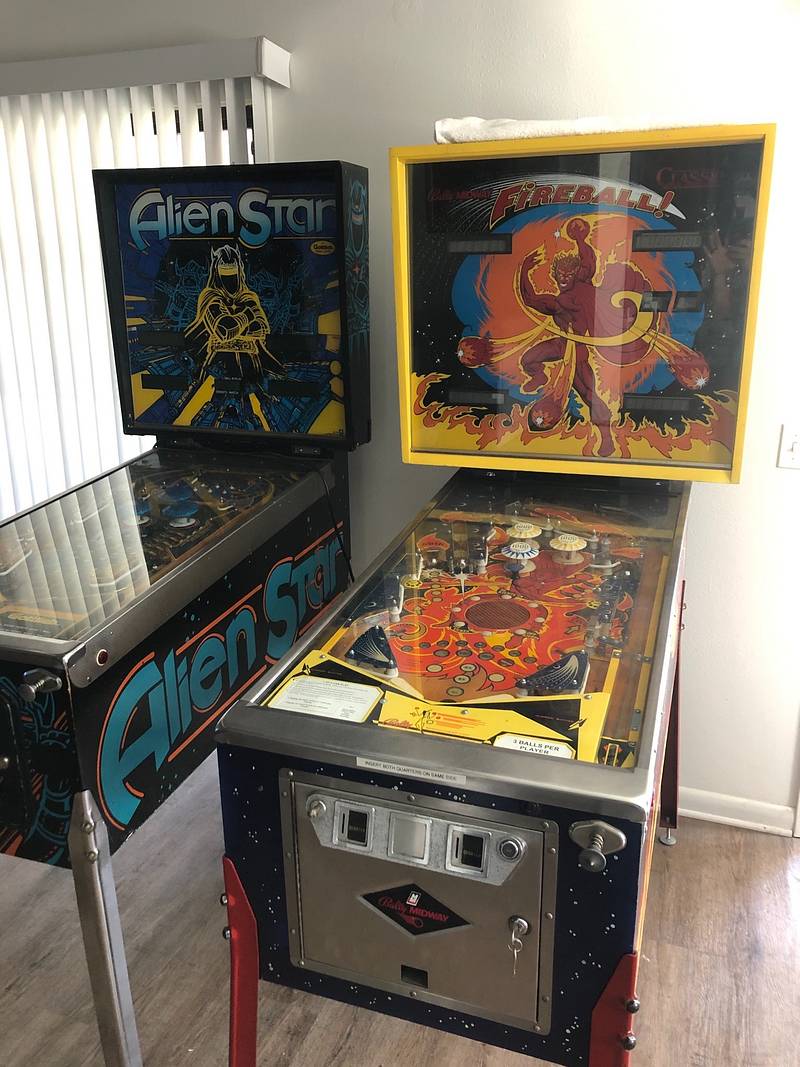 Sorry about the trash cans, we’ve pulled everything in for the storm

I posed because we have similar tastes

I always thought Fish Tales was similar to BSD.
Fish Tales is like BSD because-
- cool small “modes”
- hard to get jackpots, but super fun.
- super cool video mode
- you are kinda progressing everything at the same time, so it gets more intense as you go.

Many of the games made at the same time as BSD have similar depth, fun, and vibe (but not the horror vibe necessarily)...
- Fish Tales
- Creature from the Black Lagoon
- Funhouse
- Getaway HS2
- White Water
- T2
- Dr. Who

IMO you could extend the list to most 90's Bally/William DMD games, but the above always felt part of the same category to me.
They are all really well done (art, animation, audio) with a simple, fun 90's arcade feel.

I think a grossly missed title is Earthshaker. They're typically cheap, shallow rule set and just a downright fun game to have. I regret selling the one I had. I also had a Whirlwind and the ES in my opinion was so much more fun.
Johnny Mnemonic is another greatly underrated title.
Stay on the cheaper side and ya get more pins

Thank you everyone. I've got my options narrowed down to these choices. This is based on everyone's input and my son's choice which was not suggested by anyone here. Big decision as this is the final pin in my two year long quest to put together a respectable line up for a newbie.
Cftbl
Bksor premium
Beatles gold

With my T2 currently on the auction block. Someone had to go. Hasta la vista, baby

I forgot DP pro is also on my short list. Lmk what you all think about my 4 options

All 4 of these are with a grand of each other so price not really a factor. Just what you think would fit my line up best and really tie the room together

How could I forget TWD. A quick ball game with the best code! Ugh I must be getting old

I forgot DP pro is also on my short list. Lmk what you all think about my 4 options
1 DP pro nib
2 BKSOR premium show machine
3 CFTBL
4 Beatles gold show machine
All 4 of these are with a grand of each other so price not really a factor. Just what you think would fit my line up best and really tie the room together

Based on your initial post, I would pick CFTBL. Second would be DP Pro.

These are all great suggestions but I’m going to offer one that goes in a different direction. You can make some simple modifications to your own games that will make a huge difference in their gameplay. Perfect example of this is a game that I don’t believe that has been mentioned yet which is World Cup soccer. Many players consider this game to be simple and in some cases easy. However, this game is showing up in qualification banks (notably at Papa) set up in a way that makes even the most skilled pinballplayer very worried. I’m gonna go down the line item here and ask if you can do these things to the games that you currently have as well as the ones that you’re looking to purchase. Work with whatchoo already gots!

1) Sensitize your slings. It may take a little bit of time, but your slingshots are your biggest common chaos factor in games. If a ball even brushes against the surface of the sling it should kick once. Not multiple times machine gun style, but once. When it is really sensitive, your game will make you REALLY focus on your control and aiming skills. Older SS and EM games are even more frightening as they do not have Ramos that drop the ball safely into inflames. Even you successful shots put the ball back into play in a dangerous fashion. Sling-sling-out!

2) Adjust the steepness of your game. Believe it or not, many Pinball games play much more fiercely with a lower playfield angle. This means that the ball becomes more floaty and is more apt to side to side motion leading to outlane drains. You’d be surprised, this even works with some of the newer games too.

3) Adjust your tilt. Some games are meant to be manipulated. Especially older games. I could not imagine playing Flash Gordon with a very tilt. OK, I can. But that’s the difference between a fun and challenging game and a brutal game that is so difficult to play that it becomes a luck box. I do believe in skillfully manipulating the game to save the ball from going out the outlines and even though whisper-tilt may work for some titles, it’s something that has to be paid attention to. Even two copies of the same title can lead to different gameplay results. Play a few games, make some more adjustments and eventually you’ll get the balance right.

4) Play around with your inlanes and outlines. Remove rubbers, adjust posts or remove them completely. One way gates removed can make for infuriating drains that creep up your inlane to a drain. Must work on ball control AT the flippers!

5) You can adjust your software settings. Granted you really couldn’t do a lot of this until the 80’s and 90s. F-14 is famous for having the flight insurance turned off at PAPA. And once again World Cup soccer is an excellent example with the kick out on the left set to the more difficult setting it is turned off at the start of each ball. The ball is short plunged to the right flipper goes over the right in line and lights the light Kickback shot just over the top of the left slingshot. Quick and skillful play do you like this open and greedy left out lane is critical for ball time and game survivability. It’s also a strategic decision that Hass to be made at the start of each ball, if you light the left outline kicker in the geometry of the game sends the ball to the right outline and you have no ball saver, what do you do? How do you play it? Decisions, decisions, decisions...

6) The most extreme thing you can do is to physically alter the game itself in a way so that it plays harder or disable the feature that makes the game easier. An excellent example of this would be the three bank wall on mousein’ around. Some people will either disable the targets or the motor on the wall in front of the center ramp but the best solution I’ve seen was the one that Papa John did in Pittsburgh where he put these large cheese slice like hard Rubbers on either side of the center ramp leaving about an inch and a half space behind the three bank wall to the center ramp. It made the shot incredibly dangerous and difficult even when the three bank wall was down. Solutions like this in many cases require the creativity that the pinball designer themselves didn’t have when they were making the game. I find these ideas most fascinating as they’re quite often simple and ingenious.

7) The one that most people overlook as a resource on this issue is what we are doing right now. Consider asking around to see who else has made changes to games that you have that they have done to make the game more challenging, more playable, more enjoyable for themselves. Even if you don’t agree with the changes that other players may have made to their own games you may get an insight or another angle on something that you can use yourself to make your game the game you really want to be.

If anyone else has some other ideas along these lines, I’d love to hear them.

F-14
Future Spa
Big Buck Hunter
Tommy (the pinballcode.com ROMs are an absolute must)
Wheel of fortune
Eight ball
The Addams Family
Sinbad
Black Knight with the lock setting to hard requiring the ball to go through the lower of bonus x loop and then back up the ramp to the lock sequence.
Just about anything with 2” flippers. Try a game made by Harry Williams or Ted Zale from the 60’s or even earlier. 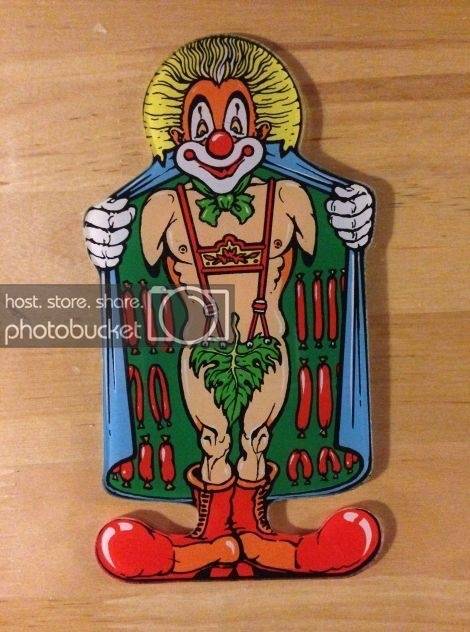