Can you recommend a lift or dolly for use with bingo games?

I need to get a lift for assembling and moving bingo games. Do you bingo guys use standard pinball dollys? Can you recommend a good quality dolly or lift platform?

Thanks for the tip. That's a nice price, too, when compared with the pinball dollys I have priced. One question, though. With a length of 28", doesn't that present a balance problem if you use the lift to raise and move an assembled bingo? It appears that the lift handle is in a fixed upright position so that you couldn't get the lift inserted far enough under a bingo's approximately 48" body to reach the game's center of gravity. Thanks for the help.

I use the same cart, and yes - the handle is a problem. On mine, I do not fasten the handle to the cart and simply lay it down while pushing. It's a little inconvenient, but not compared to breaking your back! You're correct - you want to get the cart as far back as possible to prevent the game from tipping.

Some folks have also picked up the more expensive 1000 lb model and bent the handle backwards. The more expensive model will lift almost exactly to the back of a Penske truck. The 500lb will not lift that high.

Thanks for the excellent information. I'm buying it.

The 500# one does not go high enough to bring the head up for assembling/disassembling a bingo.
Get the 1/2 ton model. It goes all the way up plus some (to 36" I think).
Sometimes I'll also use it as an additional work surface in the shop.

These also have tilt brackets for the handle which you should reverse to tilt away then just slide the handle out and rest it on the table when storing it under your game.

In case you want to use it for deliverys, you should know it's VERY heavy.

$160 is a nice price! I checked retailmenot.com and they have a 20% off coupon for any single item at Harbor Freight. The retail price for the 1,000# lift is around $259, so the coupon brings it down to around $200. A pretty good bargain compared to the pinball dollys on eBay. Thanks to all for the tips.

Note that the 1000lb cart will not fit between the legs of certain bingos. Most especially the wooden legged bingos.

The 500# one does not go high enough to bring the head up for assembling/disassembling a bingo.

That is true. I was disappointed at first when I went to lift and remove the Head....

But you should have two people when moving the Head; they weight about 150#.
I managed to do many Bingos myself; but I don't recommend it.
* Just remove the handle and slide the Lift all the way to the rear under the head;
raise the lift a little, push from the front and you can Move the Pin easily.
****** Just my opinion****

Had a PBL before the HF lift ... It worked but okay for a while but it was klunky, it doesn't work for head removal, wheels are too small and the cylinder only lasted about two years before it went bad. Wrote it off as a bad job.

Lucked out on the $160 price.
Saw they were on sale and went to get it.
Got to chatting with the manager mentioning I was going to use it for pinball machines.
He smiled and started reminiscing about them in his youth.
Listened intently asking him about the old days and if he remember titles and such.
It helped - we clicked.
When he helped me up to the register with it and told the gal to scan the 25% off coupon for me too (which normally doesn't happen for item's already on sale).
Maybe give that technique a try ... can't hurt.

Anyway, got it home, pumped it up and next morning found it all the way down.
Alas, the cylinder was faulty and had to return it for another (which works fine).
So when you get it home pump it up and see how it is in the morning.
They normally will creep down a very little bit overnight ... maybe an inch or less but again it's normal for them (confirmed by others that have them too).

Don't attach the hardware right away in case you need to return it. You'll just have to take it all off again like I did (grrr).

You should not have to fill/top-off the oil even though the instructions say to do so.

Back to the 500# model! My games have wood legs. Thanks for pointing that out.

No problem! It does mean that you'll have to struggle a bit with the head attachment, but the wooden games are lighter, at least. I usually walk them onto the cab, then try not to break them down again unless I have to move them out.

Muggle's lifter is great if you're moving around magic screen games or mystic lines games.

The 500lb is also easy to manhandle if you need to since it doesn't weigh nearly as much!

I can recommend the 500lb hi-lift from northern tool. It's around $300 but it's awesome! I can load and unload any game into my fairly high f350 truck by myself. I loaded an unloaded this bingo (with the head on) myself.

Spend a little more and get a good lift. Those harbor freight ones are just too cheesy, don't lift very high and don't last. 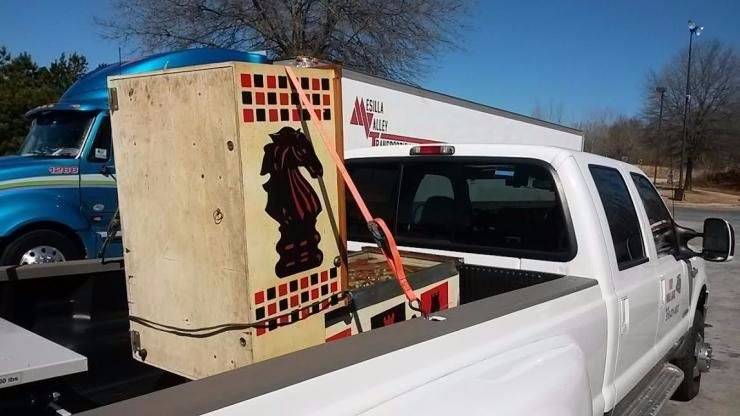 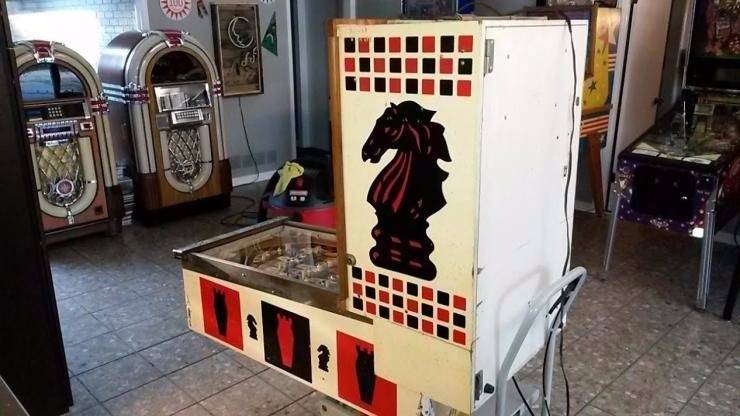 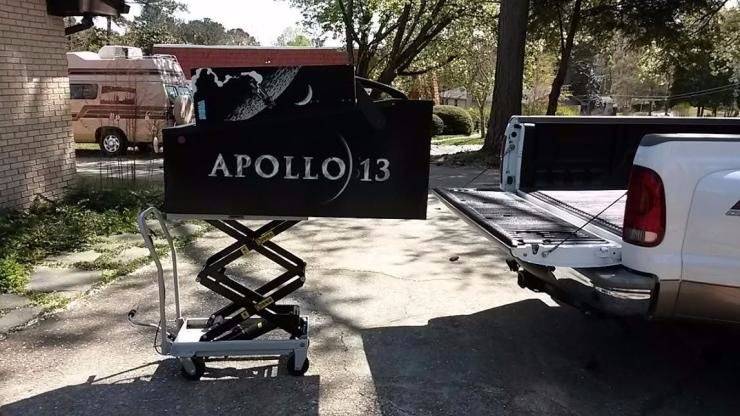 Have you considered an Escalera with the forklift attachment? It has a 1200 lb capacity and will lift 54 inches high. More expensive but you also get the stair climbing capability.

The feet are off the ground just hard to see 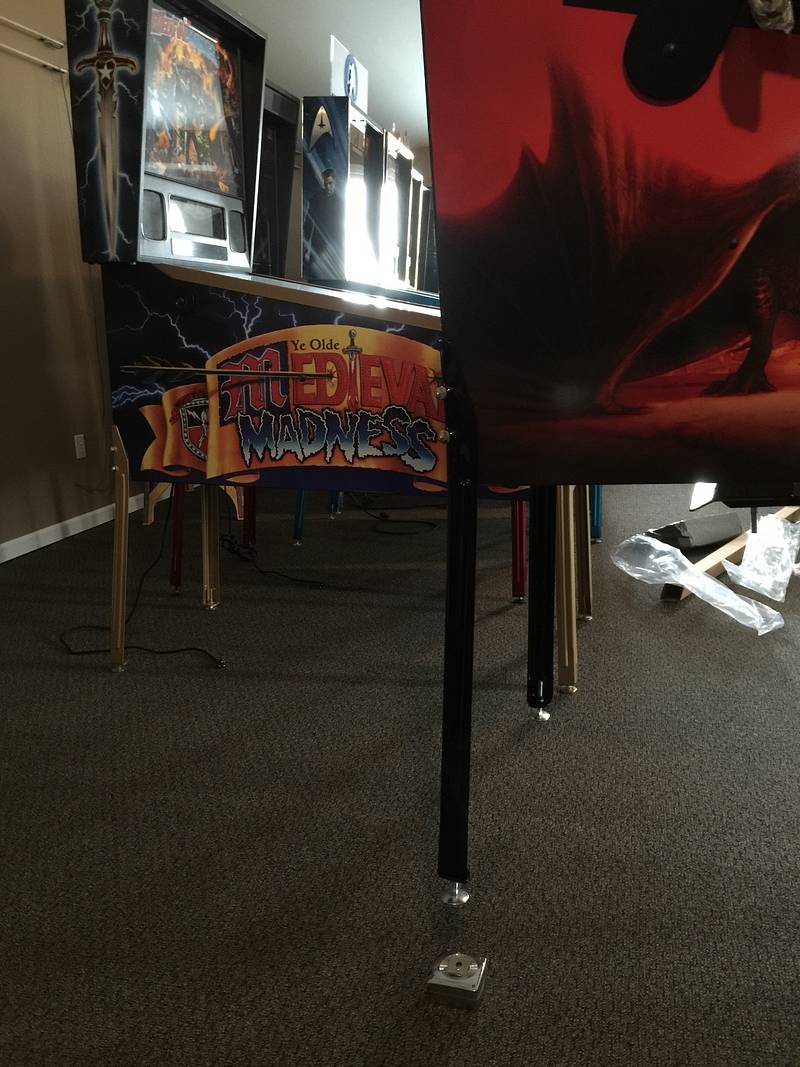 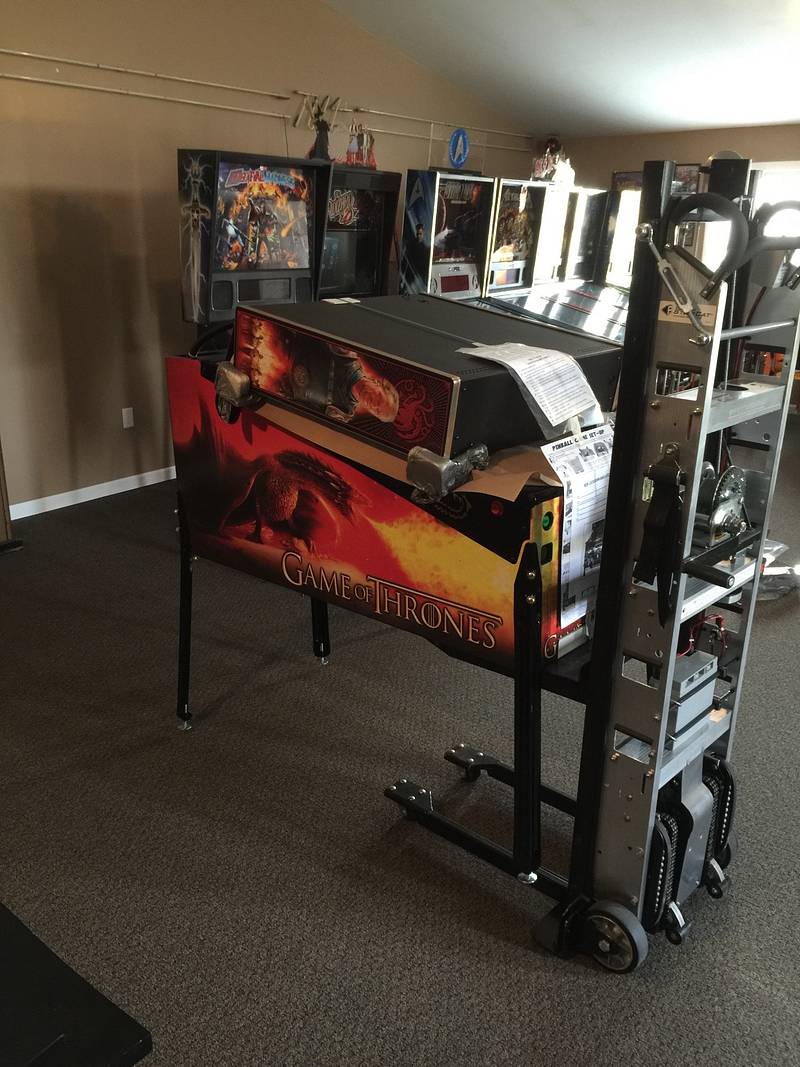 that escalara forklift is such overkill for moving pinball games. LOL.