I have a Pinbot project that has a non-working sound board. The speach works, but there is no background music. I went to a fellow Pinsider's place and used his working Pinbot to test it as follows:

I am officially dead in the water with this one. I do have a known-to-be-working B-11581 from an Earthshaker. It has two ROMs installed and the Pinbot has only one at U4 on the sound. Can the 11581 be used in the Pinbot?

Both sound boards are setup similarly with a D/A 1408 chip on them, so it may work. If it were me, I’d put your Pinbot U4 chip in it and try it. At worst the board won’t boot, and you won’t hear a tone at power up.

Does the 11581 need to have jumpers changed to work with one ROM instead of two? The Earthshaker ROMs are at U4 and U19. The Pinbot ROM would populate only U4.

Here is what I found in the old RGP archives:

From Clay's System 11 Guide.
This along with some pictures and more information are found under the
"different generations" section early in the guide and are not located
under the very short sound board section later in the guide.

* Ok so maybe I lied about the sound board using 27512 EPROMs. It
appears the system11c generation of the D-11581 sound board has two
additional W10/W11 jumpers. For the board to be set to use 27512
EPROMs, W10 is installed and W11 is removed (in addition to W2
installed and W3 removed). The problem is on older D-11581 sound
boards, there is no W10/W11 jumper. I believe this was the reason I
could not get an older D-11581 to work with 27512 EPROMs. The
schematics are of no help since this jumper is not shown. I believe
the W10 jumper installed just ties all the EPROM's pin 1 together, and
with W10 remove they are not tied together, and with W11 installed all
the EPROM's pin 1 are tied to ground. But I may be wrong about that.

Ok, that is odd. I *think* the voices were generated from the MPU sound section. The sounds from the MPU are then mixed with the sound board generated sounds in the amplifier section of the sound board. When I get home this afternoon I will look at both wiring diagrams and see if I can find a reason why they are not mixing.

Off the top of my head, You may want to check the connection between J16 on the MPU board to J1 on the sound board. That feeds the input from the MPU to the sound board. I have a Whirlwind with a fully populated 11581 board in it at home and a Millionaire machine that uses the 11298 board in it. I may try to swap those around and see if I can get the 11581 working in the Millionaire.

I flipped the cable end for end. No change. Flipped the ribbon cable also. No change. I am going to go through the original board and replace all of the chip sockets and test the board after each one is replaced to see if that is the issue with it not working. I'm running out of bullets!

Red herring on the speech not working. I put the old sound board back in after replacing an IC socket. It still didn't work, but neither did the speech. I'll have to check what that issue is related to. Maybe I didn't get the speech ROMs properly installed when I got done with testing on the working Pinbot. I am reasonably confident that when I get that working, I will be able to use the 11581 for the music. I'll keep you informed.

Well it sounds like you are tracking the problem down. I do have some good news. I swapped my fully populated 11581 board from my Whirlwind into my Millionaire. After installed it, I thought it wasn’t working because I didn’t get a boot tone, but when I went into test mode, all the music was there, and it appeared to work in game mode. 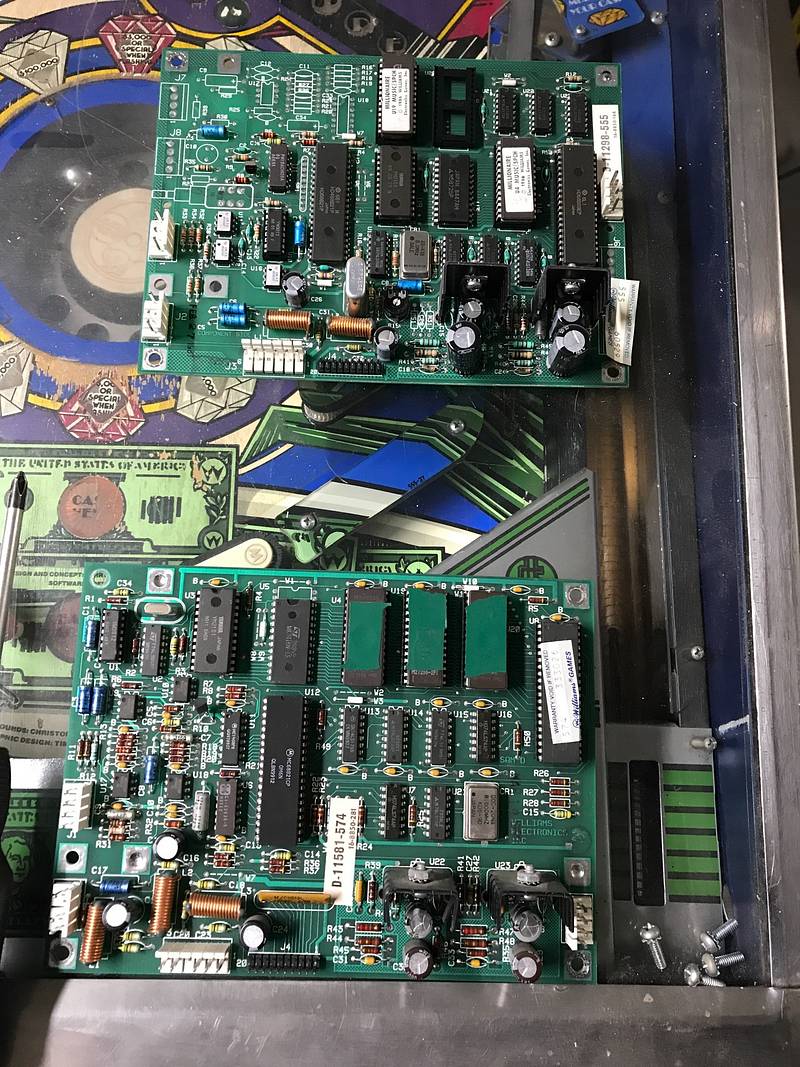 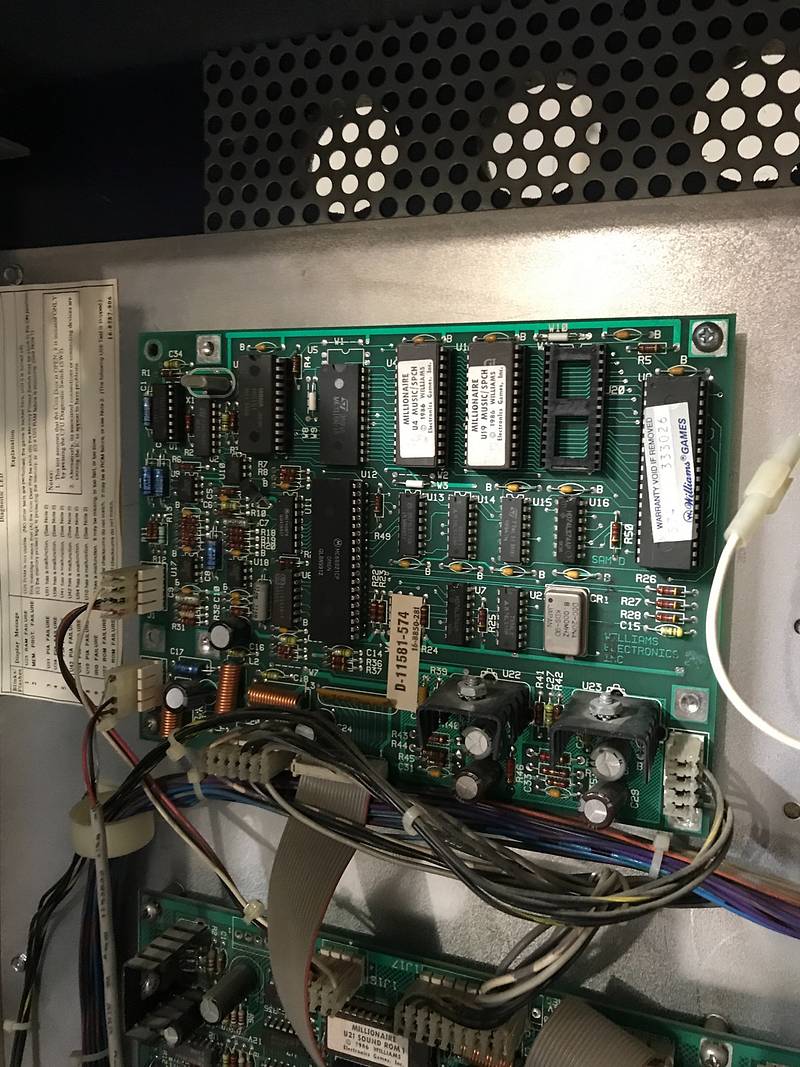 Great! I'm am confident it will all work if I can just get the speech working again!

Great! I'm am confident it will all work if I can just get the speech working again!

I am having identical issue as you. No sounds at all on pinbot. I do get the 1 test tone when i turn it on. That is it. I don't get any sounds when using s1 on CPU or using the tests at the coin door I too was wondering about swapping with a 11581 sound board out of swords of fury.

Did this solve your problem?

No I don't get any sounds in the menu either.
Also get no sounds by pressing S1 on MPU.

Since you are getting a tone at boot, it sounds like the Sound section of your MPU is not working. You can start by reseating the connections at 1J15 and the ribbon cable at 1J21. You could also try re-seating the sound roms and sound processor at U24, U21 and U22.