Brick Wall for The Shadow (Thanks Gov!)

I saw a few other people use a decal to liven up the back wall of the shadow and thought it looked nice. I remember seeing molded plastics sheets at the hobby store and thought I would give that a try instead. I sprayed the base color and then my buddy, Gov, took it from there. I think it looks great! Thanks again for all the help! 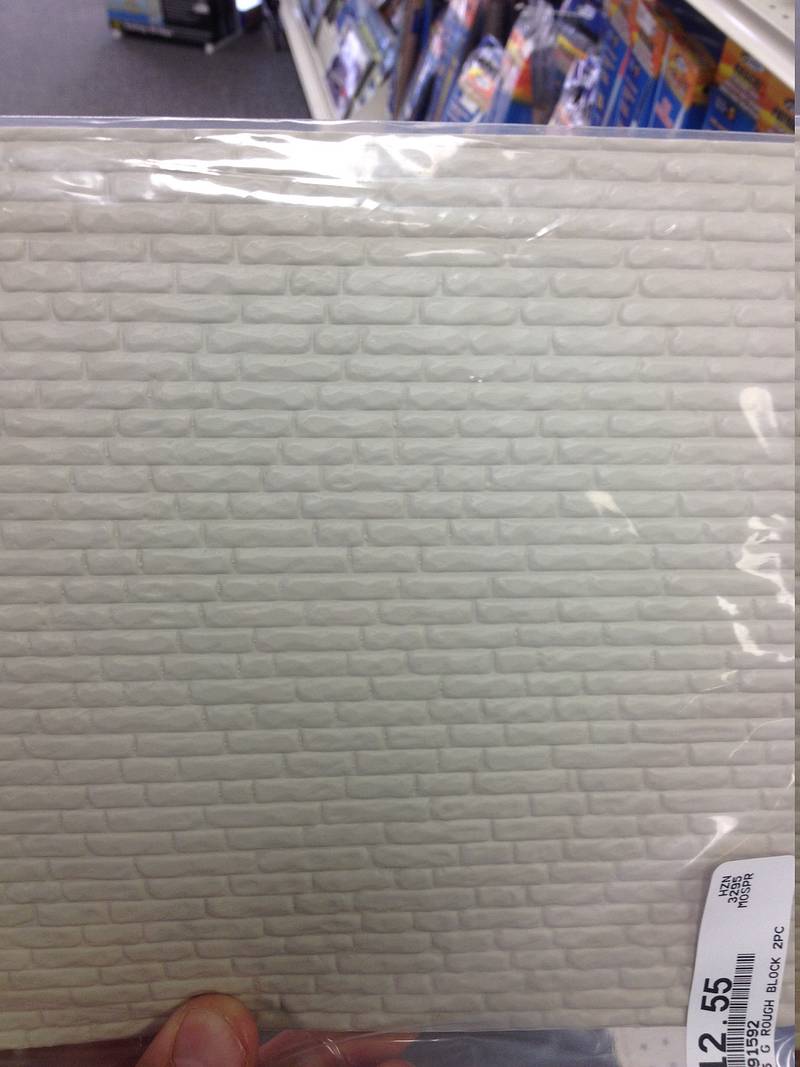 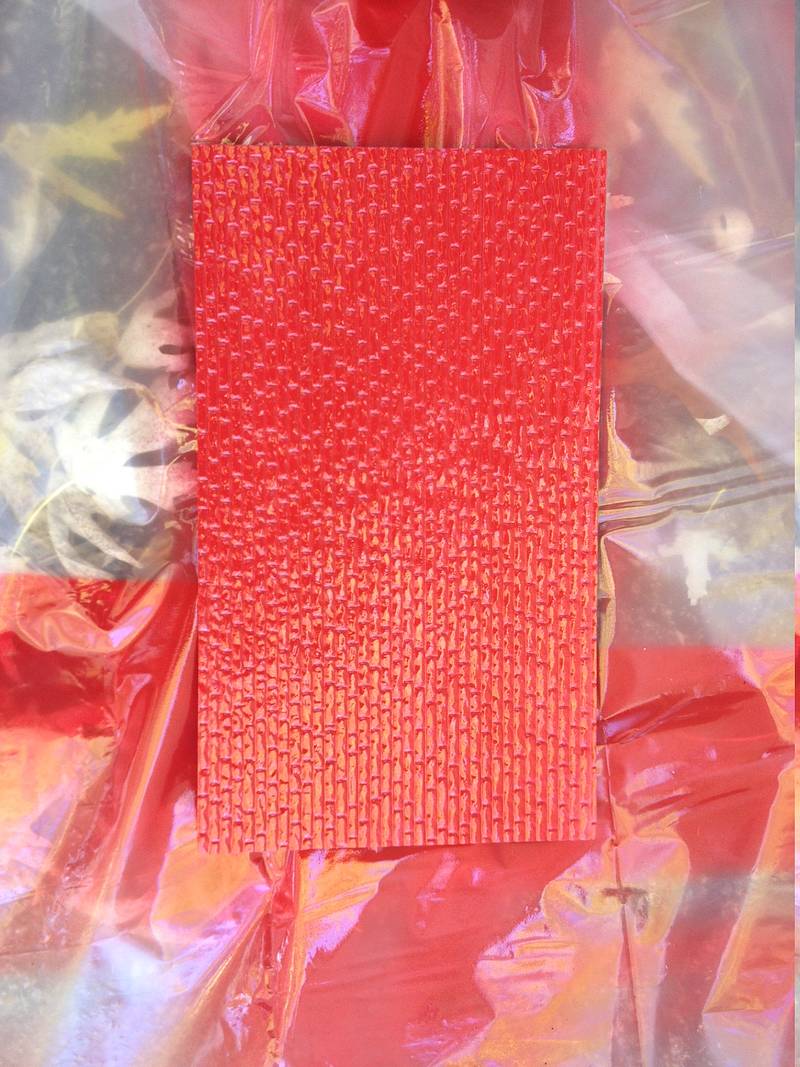 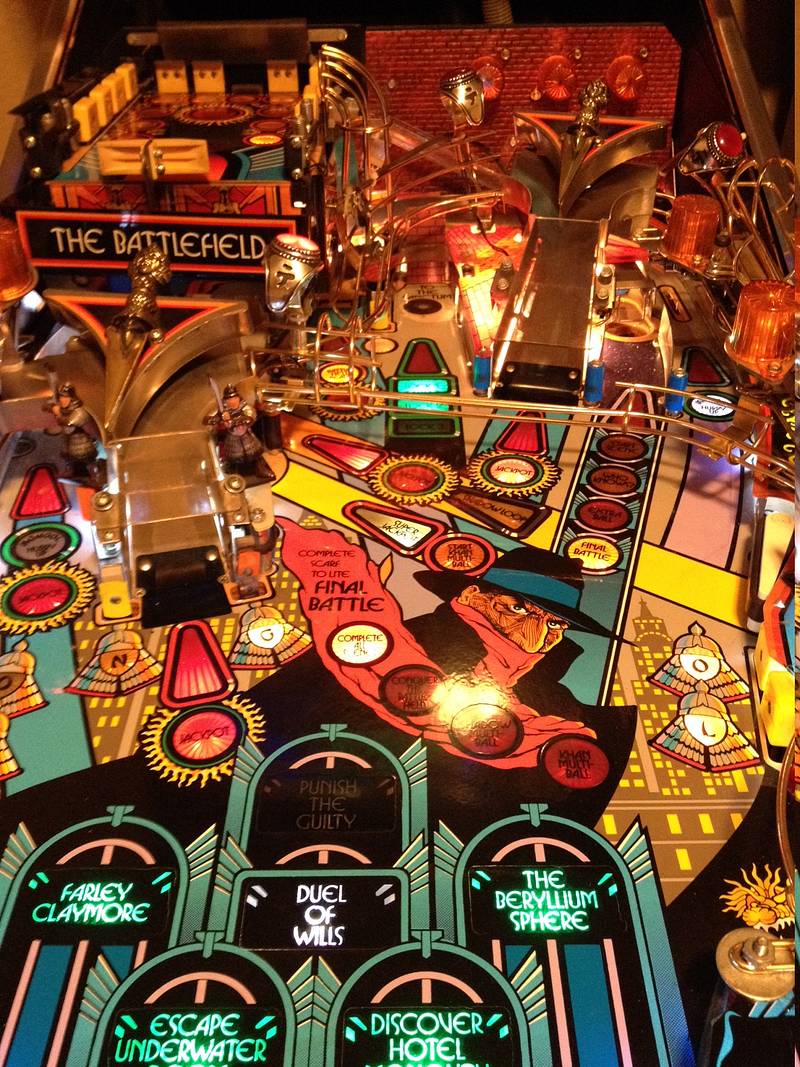 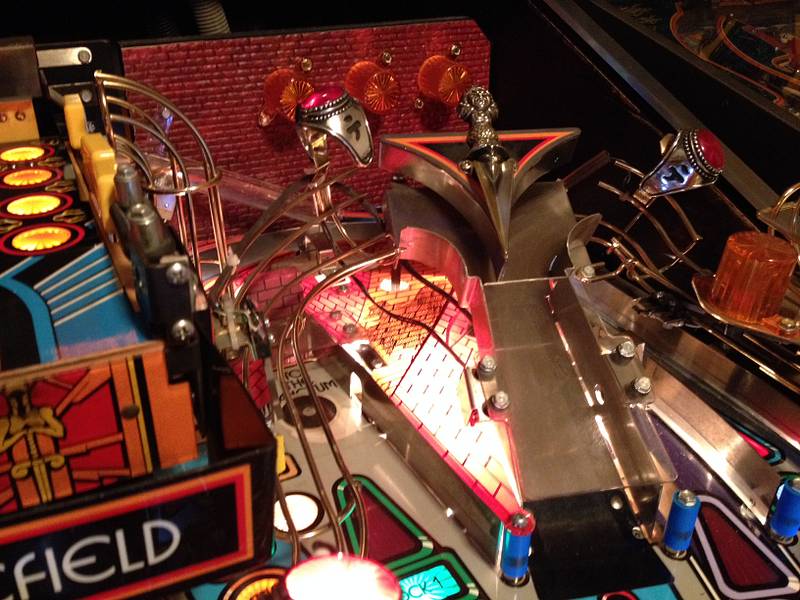 Looks good. Been a year or so since last watching the movie the wall used as entrance into the secret lair was red was it not?

Ive actually never watched it, so I have no idea.

And FYI, I did NOT do that repair job on the sanctum! It looks pretty awful and I hope to get that fixed soon.

No problem, it was fun to work on. Looks good installed!

I like the brick, but is that as far as your right phurba goes?

You know what might look interesting - after spray painting it... take some watered down black acrylic paint and wipe it onto the bricks. The idea would be to wipe it off the red bricks but it would settle into the cracks... giving it some nice detail. I think I'll try this at some point.

What did your friend use to smoothly cut the plastic btw? thx - looks nice

You know what might look interesting - after spray painting it... take some watered down black acrylic paint and wipe it onto the bricks. The idea would be to wipe it off the red bricks but it would settle into the cracks... giving it some nice detail. I think I'll try this at some point.
What did your friend use to smoothly cut the plastic btw? thx - looks nice

That is what we did. The pictures don't really show it that well. Used India ink and then dry brushed highlights over that. John actually did all of the cutting.

That is what we did. The pictures don't really show it that well. Used India ink and then dry brushed highlights over that. John actually did all of the cutting.

Ahhh I can sort of see it now installed in the machine. I was going by the early uninstalled pic.

I know he didn't do the cutting but wondered if he knew what was used... not sure what I would use to cut the plastic if I attempt this.

I like the brick, but is that as far as your right phurba goes?

What did your friend use to smoothly cut the plastic btw? thx - looks nice

I just used a fresh x- acto knife. It was really easy to cut thrrough

I just used a fresh x- acto knife. It was really easy to cut thrrough

Does anyone have a template for cutting the brick down to size and locating the screw holes? I'm sure I can measure this out but am asking just in case there's a more precise option available. Thanks!

Did you glue it on? If so what kind of glue?

Did you glue it on? If so what kind of glue?

Not my mod of course and I haven't done mine yet, but I assume all of those screws would hold it in place (the plastic brick sheets are thin but relatively rigid plastic).

Sorry, I didn't see your comment. No glue, just used the the screws and stuff to hold it on.

FYI - you can get one of these already colored at some hobby stores. I got a tip to go to a place that sold dollhouse stuff. Who knew there were stores that sold everything you could think of to make custom dollhouses. Anyway, the brick came in a sheet and was already red with white "mortar" and was textured like the sheet shown here.

I thought I was buying a mod like this and ended up paying $25 for a brick wall sticker that won't be going on my machine. Oh well. Live and learn I guess.

So I finally got around to doing this mod. I bought a sheet of plastic brick at a model railroad store here in Denver (it was actually labeled as "concrete block" but I liked the size/texture better than the smaller "brick" sheets). 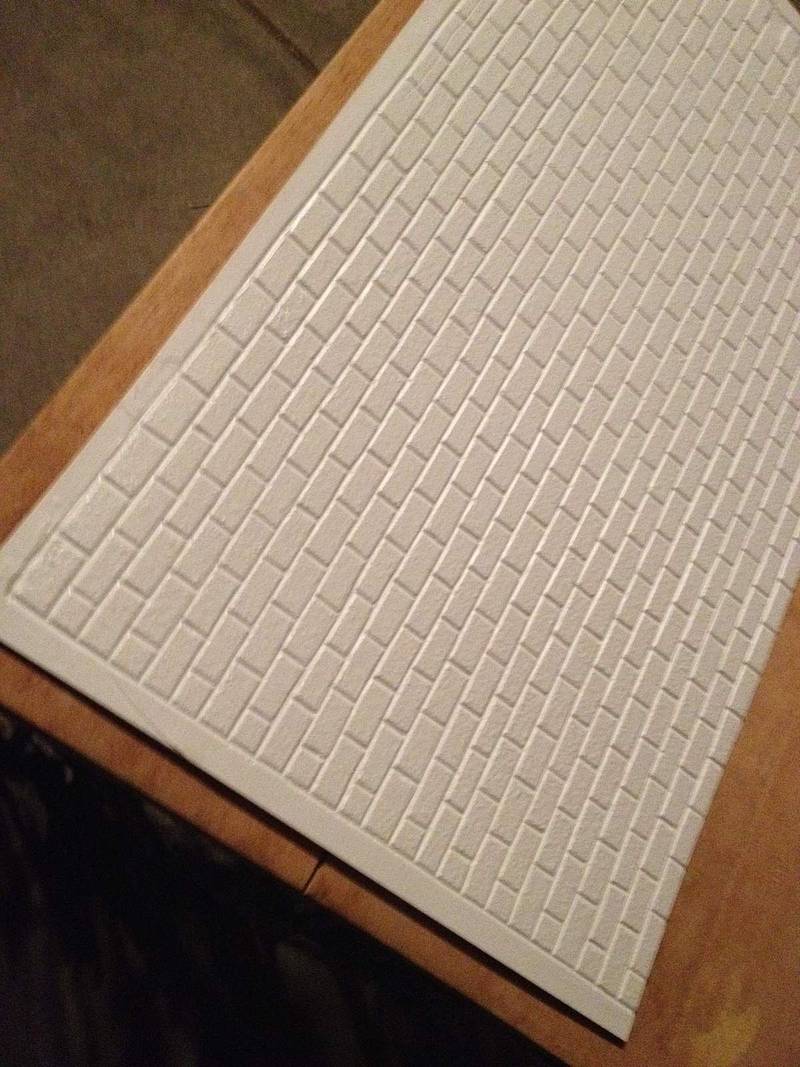 I measured the area and trimmed a piece slightly oversized, then sprayed with Ace Red Oxide Primer. I let that dry for a few days, then hand brushed over it with a wash of roughly 10x water to 1x white acrylic paint to add a "mortar" look, mopping up the excess with a paper towel but leaving some white behind in the spaces between the bricks. After that dried a bit, I followed with a wash of 10x water to 1x black acrylic paint to add a touch of "grime" (I used cheap $1 flat acrylic paints from Hobby Lobby, but even gloss probably work OK given how diluted it is). If you wanted to match the brick plastics and the sanctum (which have black "lines" between the bricks) you could do the black wash alone, but I like how the white "mortar" makes the individual bricks stand out a bit more, and the white wash also gives the bricks a realistic faded/weathered look.

Here it is installed, I'm very pleased with how it came out, it has a three dimensional look that doesn't come out well in the photo but definitely beats a sticker from my view: 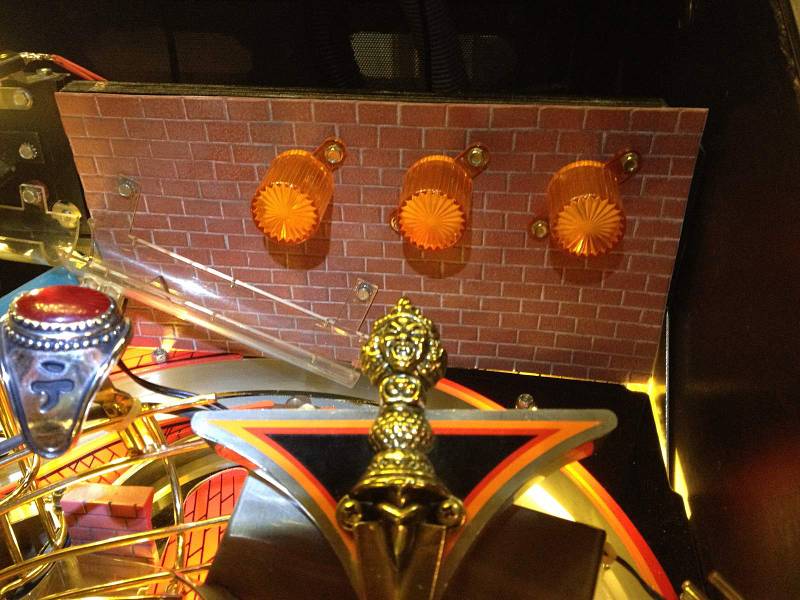 It was actually more of a pain to install than I would have thought. I describe my approach below, but if someone who has done this has an easier/better method, hopefully they can post it!

The main difficulty was in figuring out where all of the screws should punch through the plastic, which is thick enough that you cannot "feel" for the hole as you might with a piece of paper or a sticker. After removing the three flasher domes (and the flasher bulbs and fixtures from the rear) plus the two screws holding the plastic ball trough to this section of the back panel, I trimmed down my brick sheet to final size. Then, starting on the lower left and working my way across, I would eyeball where I though the screw should go and use a safety pin to poke a hole through. If I guessed correctly, I would then expand the hole a bit with a scalpel, and then put that screw in and move on to the next. This took some time, and required expanding/adjusting some screw holes with the scalpel in the end to avoid unsightly flexing in the sheet of brick. When I had the screw holes where I wanted them, I poked the safety pin through the flasher openings in the back, and then expanded those three holes out to the appropriate size from the front using the scalpel.

Once I had the sheet of brick installed, I found that the plastic ball trough was pushed a bit further off the back panel and no longer aligned well with the upper section of the trough coming off of the battlefield. This was an easy fix -- I added a spacer to the right-most screw on the upper trough section and it now aligns perfectly (as you can see in the photo, what looks like a red ring behind the screw on the clear ball trough to the far left is actually a screw tab that I snapped off of a spare flasher dome, but an appropriately sized washer would work too).

A fun mod and one that makes the back right of the game look much, much better. Just reserve some time (and a few curses) to get the screw holes punched through!

What if you made a template with paper first?
That way you could see all the holes and then use it as an overlay over the plastic bricks.
Then it should be really easy to make the holes.

I am going to do this mod myself, so all good suggestions to make this
Easier would be great!

What if you made a template with paper first?
That way you could see all the holes and then use it as an overlay over the plastic bricks.

Sounds smart to me! Maybe go with card stock for your template though, as it would be a bit easier to work with than paper since it's stiff.