47 key posts have been marked in this topic, showing the first 10 items.

Post #1159 Adjusting the Magnet Posted by PiperPinball (4 years ago)

Post #1914 How to Diagnose "Stuck Joker" targets. Posted by PinMonk (4 years ago)

Post #2873 Link to announcement of Batman'66 Accessories. Posted by Rasavage (4 years ago)

Post #5589 Update on code development from Pinball Expo. Posted by pinghetto (3 years ago)

Post #10080 Setting to turn off Coin drop numbers. Posted by cadmium (3 years ago)

Show all 47 key posts in the index

You're currently viewing posts by Pinsider dtrimberger.
Click here to go back to viewing the entire thread.

Hey everyone,
The 2 wires to my Crane Flasher came off. Can someone please tell me which colour is the positive wire? There is a red and an orange one, and I'm not sure which to hook up to the positive part of the flasher. (I'd assume red, but thought I'd check here first.) Thanks!

I’ll look for you tonight when I get home. This was happening to me so when you do fix it make sure there’s enough slack for the wire leading to the led, mine was too snug in the zip tie so when the crane moved eventually it would pull it free.

I’ll look for you tonight when I get home. This was happening to me so when you do fix it make sure there’s enough slack for the wire leading to the led, mine was too snug in the zip tie so when the crane moved eventually it would pull it free.

Crap picture but it's orange than red going from post screw distally. 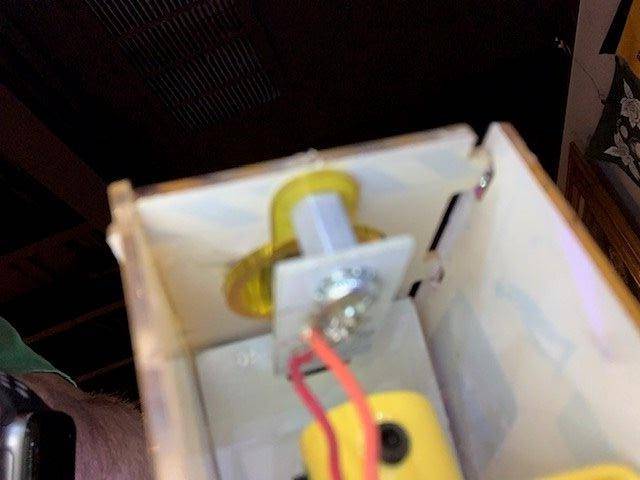 What's Stern's track record when they release a vault edition? Do they often update the code at the same time? I'm not even close to good enough to get to the wizard modes but still wouldn't mind seeing more code.

Unfortunately my BM66 is currently on the fritz anyway. The subwoofer preamp chip was running hot and the sub wasn't working with occasional loss of backbox speakers as well. But then I lost the whole game a week ago and now have a white lcd screen and only power indicators in the backbox but no other indication of the game booting up. I suspect the main board is fried somewhere.

I have a email in to Stern since last week Thursday but haven't heard anything back yet. I know their still probably trying to replace Chas (irreplaceable imho) but not having the game to play is a bummer.

I know this is a long shot, but...
I was able to get a premium topper for my Batman66, but the city skyline plastic in the back was cut down significantly, maybe they had a super low ceiling?
Does anyone have an extra set of the topper plastic? Would it be possible to make one? I’m missing the helicopter too. [quoted image][quoted image][quoted image]

I'm crying a little inside because 1) I wish I had this topper and 2) my basement also wouldn't fit the topper but there's no way I'd even consider chopping it down to make it fit. Sad.

I'll look at mine tonight but I gotta say that seems unusual, both in having to replace it twice and that wear pattern. Is it hitting something as it turns? Wouldn't be the first time a metal rail/guide is slightly out of position.

The factory sometimes zip ties the wire a little short so pull yourself some slack or it will happen again.

My 12 year old got to Villain escape last night (before me btw, first family member to do so, this game has my number) and damn that was cool. He beat my grand champion as well. I did enjoy shouting at him what villain shots he still needed though... right before he slept outside for the night.

MY BALLS GET STUCK...
1. Behind the left Catwoman ramp.
2. To the left of the mini TV. There is a plunger there or something with an alley behind it and my ball goes back there and stays. Also, what is this for?
SUGGETIONS TO KEEP MY BALLS MOVING?

First off, so many ways to go with jokes here.

Can you get us a pic? (Of the area you’re concerned about, not your balls, that’s a different forum)

Is it the ball lock area shown below? Are you able to get 3 balls locked there to start the Multiball? Hopefully the post releases them when multiball starts and/or when the game is complete. If you start a game right away after completing one and there are balls in the lock, it will not release them.
[quoted image]

When I first got my BM66 (second owner) the ball lock would sometimes not release. I seem to recall making a slight adjustment to its positioning from underneath and applying a very small amount of white grease to the plastic plunger (a little goes a long way which you don't want to clean up later).

Otherwise the ball is supposed to lock there after you hear the call out of "lock is lit", meaning you are now able to lock balls. After that you'll hear "ball 1 locked" etc until ball 3 at which you get a multiball. At the end of the game if you haven't reached multiball all the balls that have been locked should release before your next game.

I'm still confused as to where the ball is getting stuck behind the L catwoman ramp. What position is the rotating playfield in when this happens?

Think I would have to either see a video of the issue or come see it in action. I'm not sure I understand what you are explaining.

e4wesley shots aimed at the target bumpers beneath the TV but miss left are able to skip the plastic plunger and land in the ball lock. The balls are then "stuck". Likely the machine registers there are balls there from the lock switches but I assume that since the ball didn't go past the ball diverter from the R orbit that the code doesn't recognize this as a ball lock so those balls are "lost" from play.

I'm just not sure how they skip the plunger.

e4wesley Do your have the plastic cover over the ball lock section (you can see it in the pic above)? Does the plunger appear to be fully out? I'm at work so don't have the machine in front of me but from what I recall it should be about a inch out.

Mystery award and a certain number of combos (don't recall currently) are 2 others I can think of. Shite players like me never get the combos so I wait for the 1 in several hundred (?) games that its awarded as a mystery.

You are right about the improvements to Catwoman Edition. Owning both the original and Catwoman edition, can attest to the fact all improvements were learned from earlier models. Even the Catwoman cabinet is far superior being an all wood cabinet, instead of MDF painted black fiber board, like my first Batman model has. Catwoman has real quality plywood and proper corner bracing and the new run will have this too. Catwoman shoots superior to the original as well. Thought the original shoots kind of clunky, where the Catwoman edition is smooth as butter. In addition the left orbit no longer has a wire hanging down into the lane, as well as the left ramp bumper is no longer an obstacle to ball zipping around the left orbit lane. Joker targets mechanisms were also sticking closed on older machines and now redesigned, with no issues. However, was able to fix older game to most of these improvements, except for the cabinet. Batman 66 still rocks as one of the best games ever made imo.

What run are you referring to on the Catwoman's? Mine was produced in July of 2019 so I'm wondering if they all have these upgrades. I definitely don't have issues with ball jumps from the L ramp or the Joker target issue. I'll have to check on the wood and corner bracing. My question is on the L ramp bumpers, that's by far my hardest shot for me to make, especially from the R flipper. Maybe I'm just looking for excuses....

I also can't think of a time I've had a launch out of the wireform. Is there a chance the 2 folks above have a bent/poorly welded wireform? Essentially the rail of the wireform sits low so the ball launches out when it has speed at the S curve. Maybe some profile pics (not overhead) of theirs and our wireforms would help identify that.

Anyone have tips for shooting the L ramp. That thing is my nemesis, I can backhand it with some reasonable percentage but from the R flipper its low percentage AND risky because bricks tend to head to the slings. The L flipper can't be adjusted correct? that would maybe help cause few of my shots just peter out before reaching the L ramp switch.

Such a critical shot for the majority of modes

Show a pic of your flippers alignment. Left ramp is pretty easy shot from right flipper on mine but backhanding from the left flipper to left ramp is much harder and can only do it on a good rollout on the flipper.

Hadn't thought of that at all. My flipper bats (ha!) are aligned above the dots. I know how to adjust them but with my overall inexperience with pinball I'm not clear how that affects the shot accuracy at the L ramp. 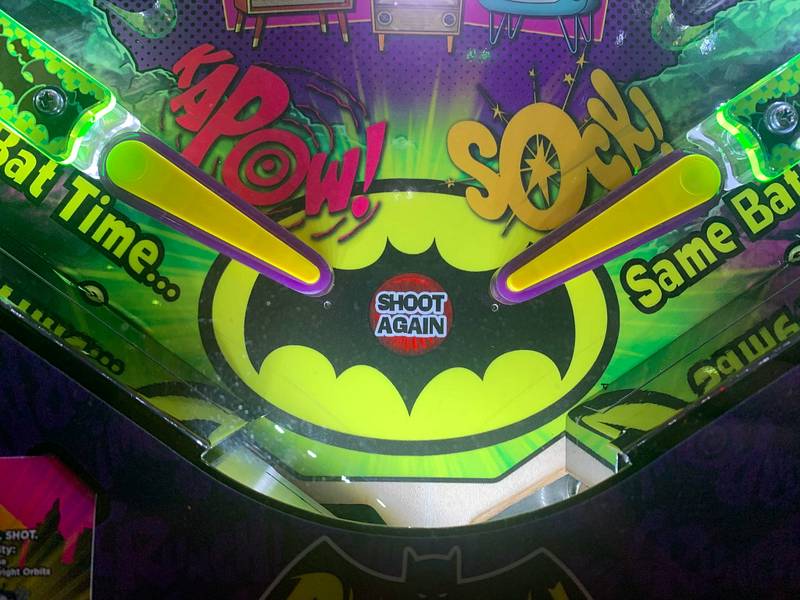 Yep, my understanding is that if the tip of the flipper shot a laser beam straight outward, that beam should go straight through those marker holes. Or put differently, the tip of the flipper should line up with the dot.
Gomez talks about this on one of his recent podcast appearances— I think the point he made was that certain designers (maybe Steve Ritchie?) like the upper edge of the flipper to align with the ball guide so that it forms a straight line, so they design for it. But that *doesn’t* mean that’s how you should align flippers on all games. Hence the little marker holes to show you what the designer intended.

Re-aligned my flippers and so far I think my L ramp percentage is better. Still finding all the shots now with the new flipper position. Thanks for the tips everyone

You're currently viewing posts by Pinsider dtrimberger.
Click here to go back to viewing the entire thread.