First time posting. Recently got my first pin - a Wizard - and I'm loving it. But, I'm new to a lot of things about pinball, in particular reading and using schematics to solve issues, so I appreciate the patience! I will eventually come up to speed but I'm not there yet.

I have an issue with being awarded an extra ball. It had been working properly as of a week or so ago but now I'm having a problem. When the bonus maxes out, the extra ball light does go on in the left lane going up top as expected. However, rolling over that lane/light does not trigger the extra ball as it should. The contacts under the rollover appear to be making solid connections. But, the 'shoot again' light in the bottom of the playfield does not light up when the rollover takes place in the extra ball lane. Nor is an extra ball awarded. The machine just moves on to the next 'scheduled' ball.

Anyone have any thoughts on this?

I'm new to a lot of things about pinball, in particular reading and using schematics to solve issues

Reading schematics (links thanks to

If the Extra Ball relay locks on when you activate it manually, but doesn't activate even momentarily when you roll over the left lane,
Inspect and diagnose this circuit with Alligator clip jumper wires 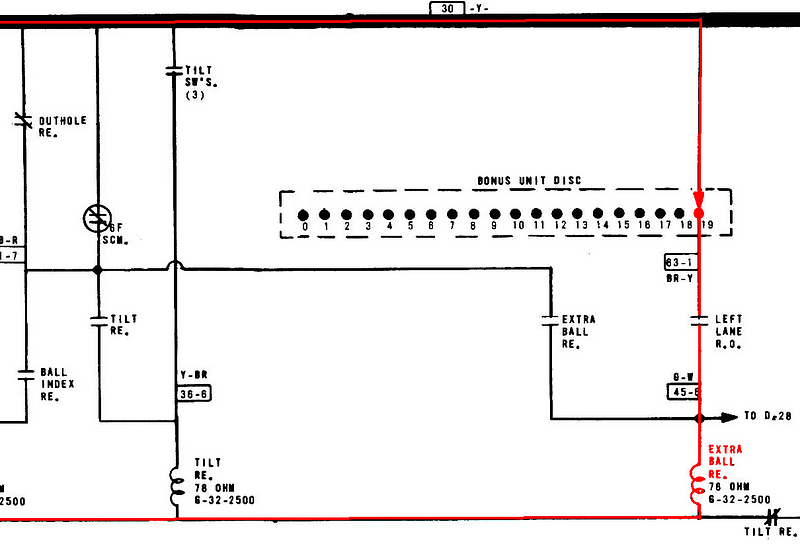 HowardR , I really appreciate it. The links were very useful. I think I'm slowly coming around. I've worked a lot with model trains so the concepts are very familiar but reading the schematics will be a learning curve for me.

Does this imply that the issue lies in between the Left Lane Rollover and the Extra Ball Relay or is there a parallel circuit that is now the concern?

Again, thank you so much.

Thanks again. My apologies as I probably didn't explain it well. I can confirm that the rollover switch does work. If I jump from the relay wire side of the switch to the actual extra ball relay, and then rollover the switch, then the extra ball relay locks. 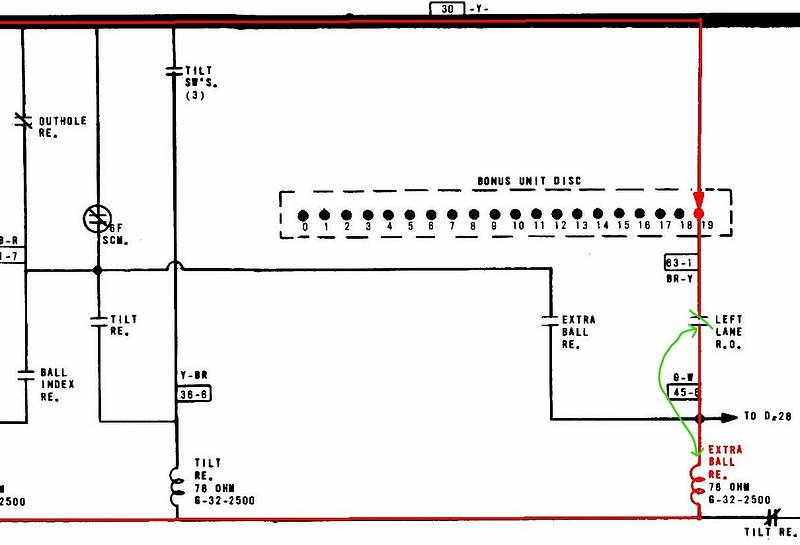 jumped the following way (in green) and then closed the switch (also in green) and the extra ball relay did indeed close. Without this jump, it doesn't close when the rollover is activated

Then there's a break in the wire (unlikely), soldering, or jones plug in between.

I will focus on that and let you know how I make out.

I can’t thank you enough.

Clean all the Jones plugs. I recently worked on a Wizard that had so many problems related to oxidized Jones plugs.

Fixed! Loose jones plug. You guys were spot on and I want to thank you for helping out someone new to this. Not only was the problem solved but I also learned a few things.

woz for your time and patience!!!

(This has been very gratifying.)