Trying to get the bottom panel out and I found this unique bracket to prop up the tray. Never saw this before. Along with the framed playfield glass , rather interesting . 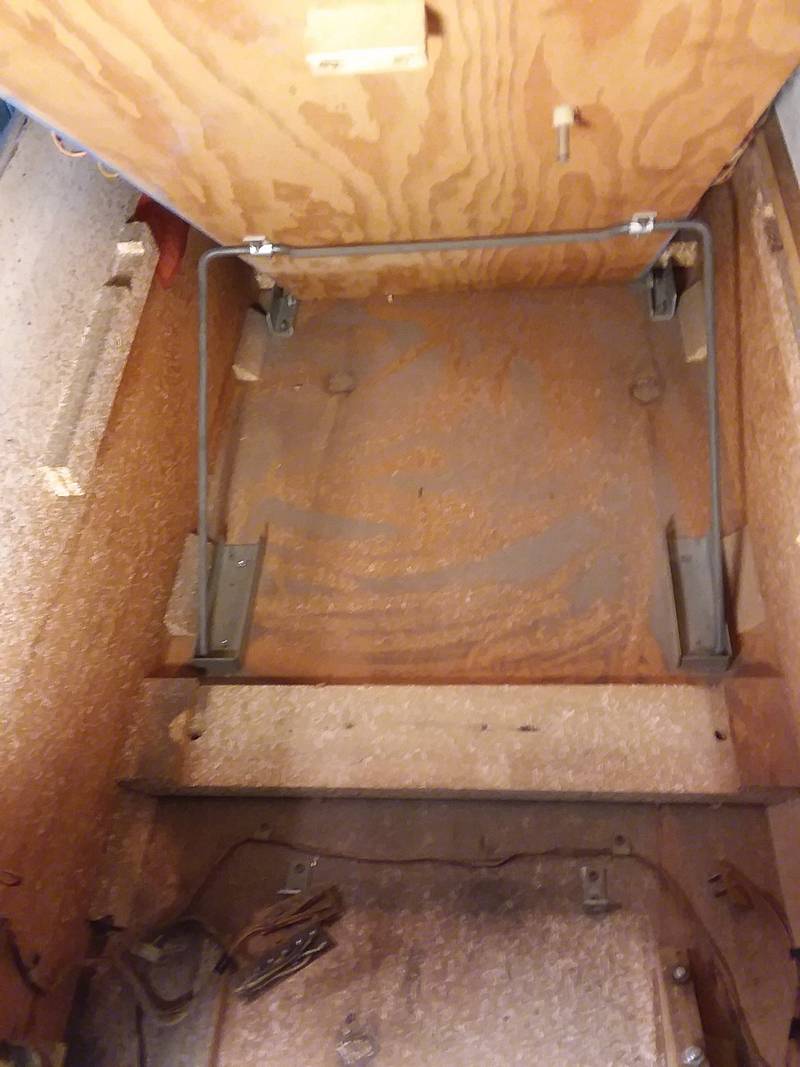 I've seen that before. Bally was adding all kinds of neat little gadgets back in the day.

I've seen that before. Bally was adding all kinds of neat little gadgets back in the day.
That framed playfield glass was kind of a pain though if the glass got scratched and needed replacement

Yes, I was checking it out and looked like no fun to change glass, especially if it broke being non tempered.

I had to strip a Bally Dixieland of that era and found the same "bar". Very helpful item.

What it does, if I remember correctly, is it allows you to pull the entire board forward and rests on the front of the cabinet in a level position for easy access and servicing.

I'm not sure though, it's been a few years.

What it does, if I remember correctly, is it allows you to pull the entire board forward and rests on the front of the cabinet in a level position for easy access and servicing.
I'm not sure though, it's been a few years.

You are correct! The funny thing is I removed the bolts and one wood screw and it would not budge. Saw tbe bracket and push toward the front of game and then I was able to remove tray.

I've seen that before. Bally was adding all kinds of neat little gadgets back in the day.
That framed playfield glass was kind of a pain though if the glass got scratched and needed replacement

It's not really that bad, assuming the nuts holding it all together aren't rusted tight. The vinyl pieces that go around the glass and into the frame can get kind of cruddy, though.

The positive to it was it allowed playfield access in tight quarters-didn't have to have room to slide the glass out.

The bar deal, you're correct. You just pull it forward and rest it on the front of the game. Surfers has a crap ton of relays and steppers on the motor board, and it makes it much easier to work on the board. I've owned my game since 1971 and I've used that feature exactly...once. The game has just been extremely reliable. It was stored, unplayed, for probably 8 years. I got it out, fired it up, and it played perfectly.

I've had the same kind of luck with Bally EMs. At first I was a little skeptical compared to others, but after working on all the other makes, I think Ballys are very well engineered and built tight. I guess having built all those super complicated bingo games over the years paid off.

I have that setup on my Rocket III can lift mother board forward, prop pf and canopy glass then start a game to work on it 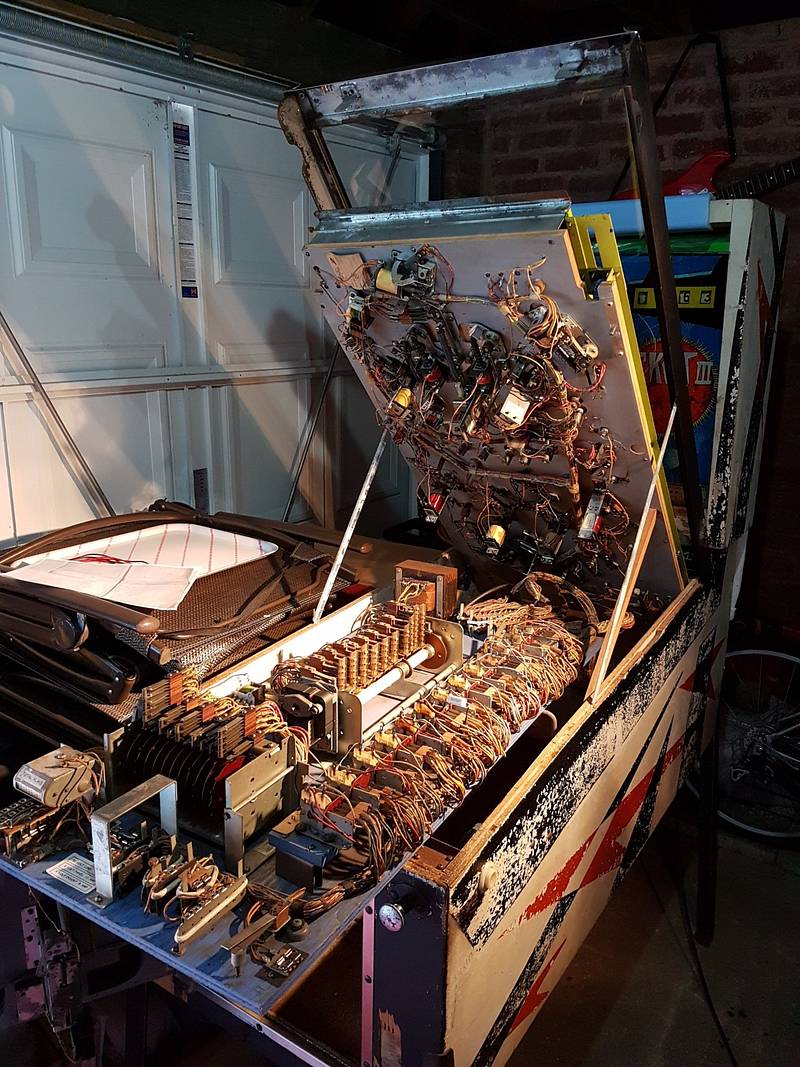 Another cool feature, Surfer supports the Added Ball (Shoot Again) Relay kit that plugs into the jack behind the score motor.

Another cool feature, Surfer supports the Added Ball (Shoot Again) Relay kit that plugs into the jack behind the score motor.

Finding one is the issue. I had mine for years before I figured out what that jack was. I don't have the relay, just the shorting plug. 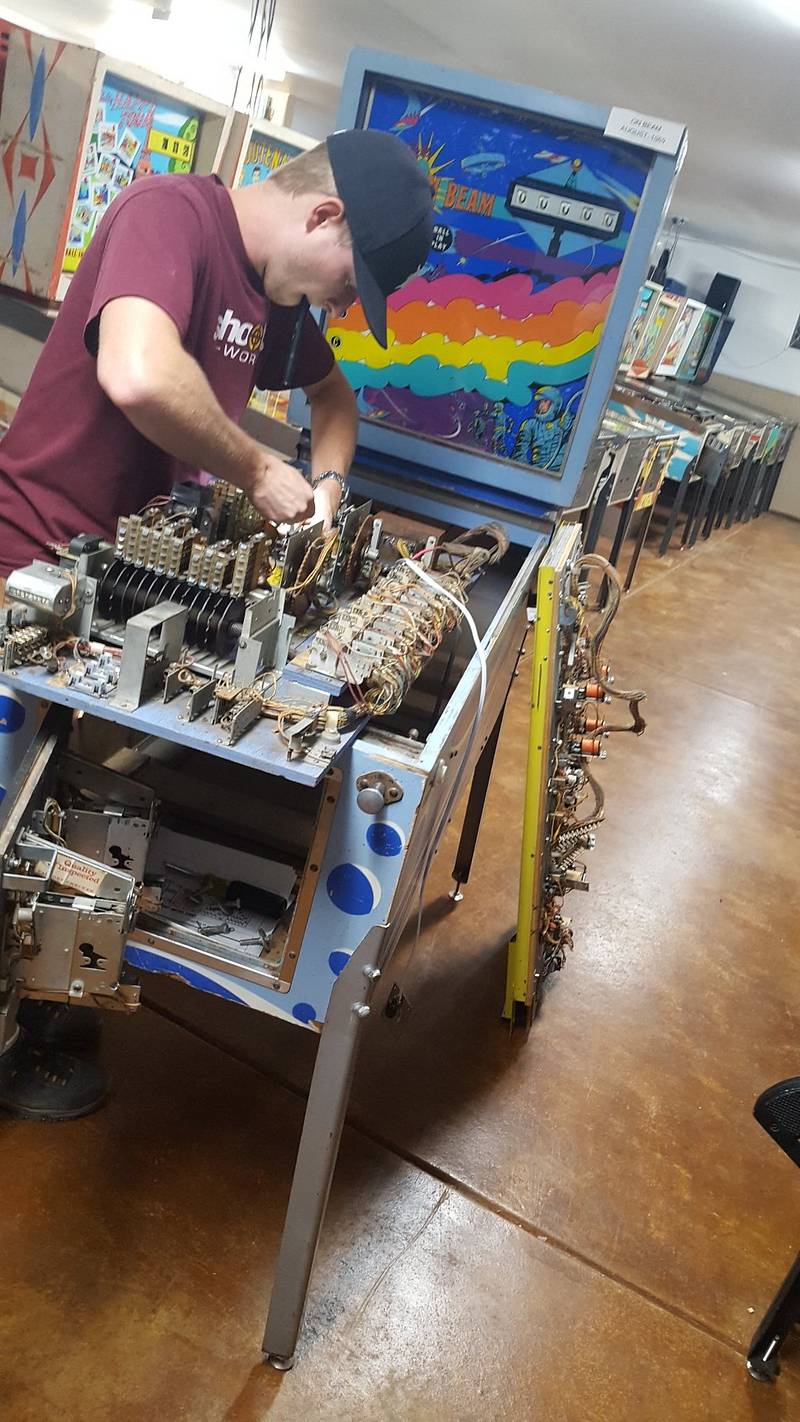 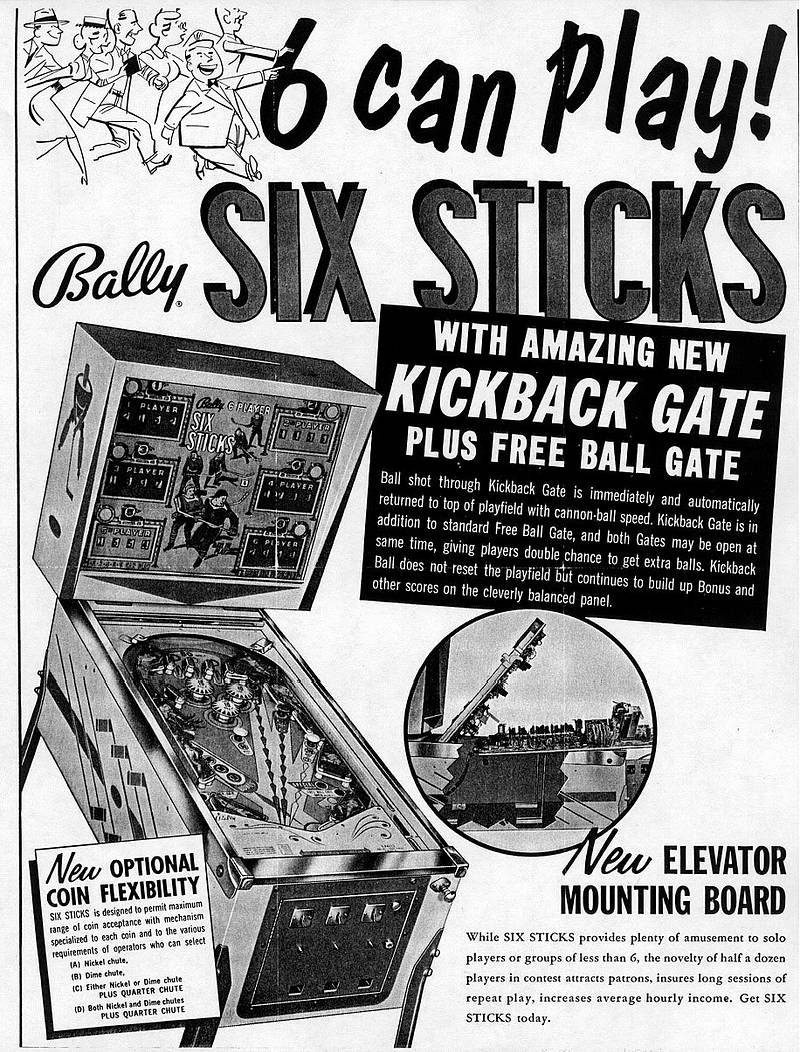 Finding one is the issue. I had mine for years before I figured out what that jack was. I don't have the relay, just the shorting plug.

Similar here it wasn't labelled, I was puzzled why what I thought was the Credit Lamp on the apron never lit, turned out that's one of the Shoot Again lights (the other on the bg) so I home made the relay based on the schematics, works a treat.

I see Surfers has a lamp in the apron too which I guess is the same function.

[quoted image] Quite handy in all modes of servicing.
The feature started with Six Sticks in 1966. Bally's first Six player Flipper pin.[quoted image]

Hete I thought the only 6 player was Bally 6 million dollar man.

Very nice and handy feature ! My Wiggler is also equipped...

There is a Bally instruction sheet for the lift-out board on ipdb (under Rocket III), that's where I learnt you can plug the door back in to start a game.
https://www.ipdb.org/files/1989/Bally_1967_Rocket_III_New_Lift_Out_Mounting_Board_Instructions.pdf

Recently picked up a

Surfers. First EM so the repair and maintenance learning curve is going to be steep.

Recently picked up a Surfers. First EM so the repair and maintenance learning curve is going to be steep.

My first EM pin, hell it was my first pin of any kind.

Funny story about it.

Our son wanted another table top pinball game because the one he was playing broke. This was the 3rd or 4th one he had and broke and at $150-200 each they were not cheap. Used that argument to convince the wife to let me get a "real pinball.....for the family". Surprisingly she agreed and the search started. Found a SURFERS kinda local and went to purchase for $300. I was too excited to haggle and to new to know what to bring or how to transport. Sooooo......went to get game and it's locked with the head on, OK take legs off, turn on side and slide into back of truck that I didn't take cap off of. (At this point cue up the Benny Hill music) I loosened up the leg bolts with a pair of needle nose pliers I found in the glove box. NEVER loosen ALL the bolts at the same time the game started to wobble like a sailor on a 3 day shore pass bender.

Now did I mention I had left the cap on the truck and the head was on the locked pinball, and it's a sport trac short bed truck. No problem right, just turn game on its side and put a strap on it.......only, because of the head bolted to body, it won't fit in head first so we have to stop, pull it out, and turn it around. All the while I'm to excited to worry about all the clanking and noise coming from inside when we turn it from side to side.

Flash forward to home and unloading it into the garage. I got the back legs on and was able to slide it out to the edge so I could put the front ones on when it came off the tailgate and was balancing on the shooter rod.

I learned quick why you shouldn't.....EVER....lay a machine on its side. What a mess, everything under the board was now on top of the board or had made its way to the playfield. I did get lucky and found the original Bally paperwork package with all the score cards, instruction cards, game schematics, everything that came from Bally under the board.

So I was working nights at the time and coming home in the morning spending an hour or two trying to get the game to work by poking around with a screwdriver and finger and after quite a few blue sparks and shocks I couldn't seem to get it to start, play a game, and go to game over. I used one of my kids wooden wheel tinker toys to wedge the hold relay closed to get things to work correctly while I was trouble shooting. I did this for a week before I realized the bad hold relay coil was what the problem was. So flash forward to today and the small wooden tinker toy is still in there and the game has worked perfect since. I have the new coil I just haven't put it in yet.

For whatever reason EM games seem easy for me to fix I kinda look at what isn't working and start there and they usually start working after some tinkering.

Good luck with SURFERS if I can help with anything let me know!