I finally started tearing down my RS playfield in preparation for a clear coated NOS swap. I've had this pin for several years now and never thought I'd be so lucky as to find a replacement for my worn out playfield. I'll receive the replacement probably late next week but began early so I could clean things up. 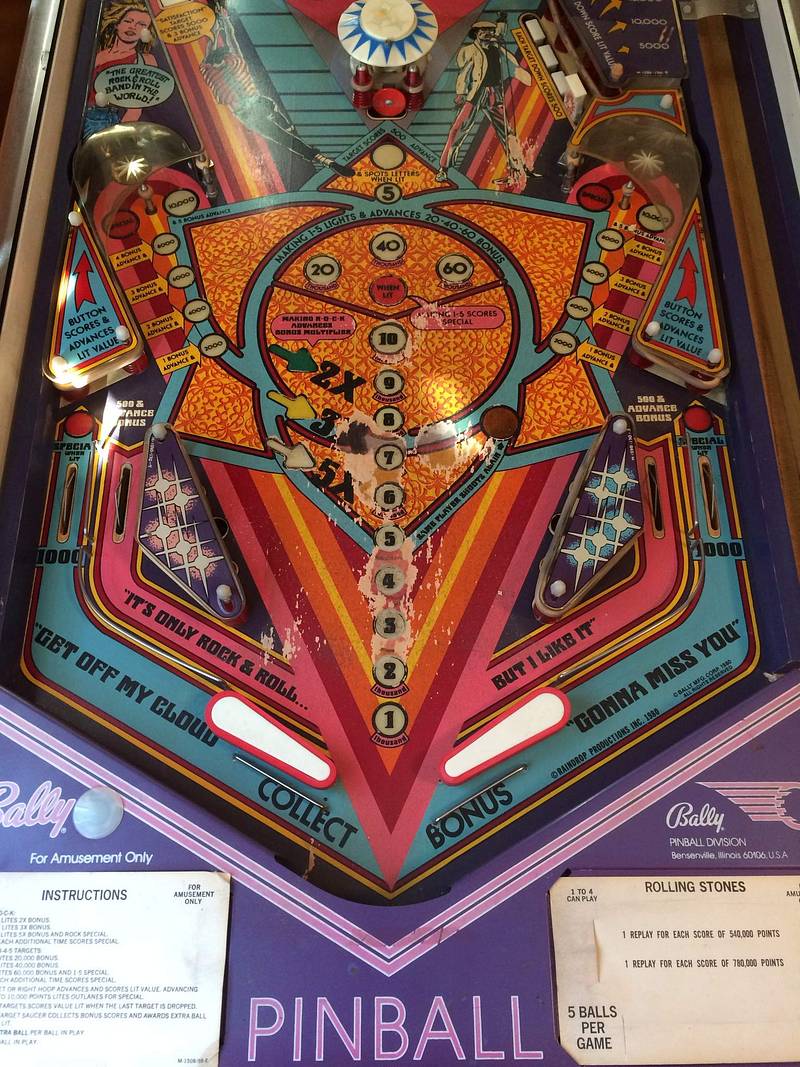 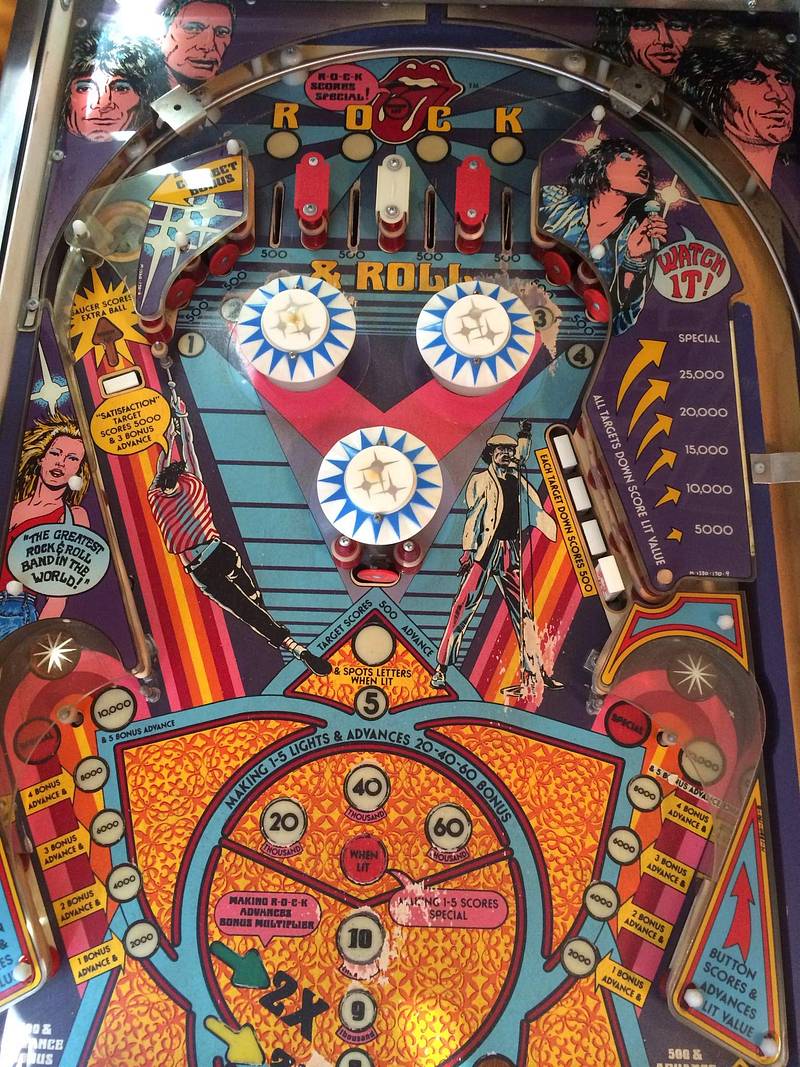 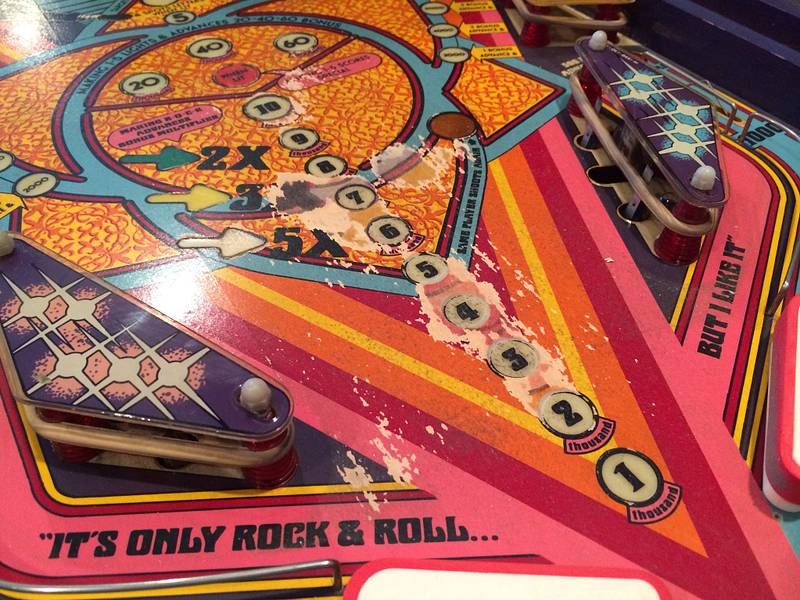 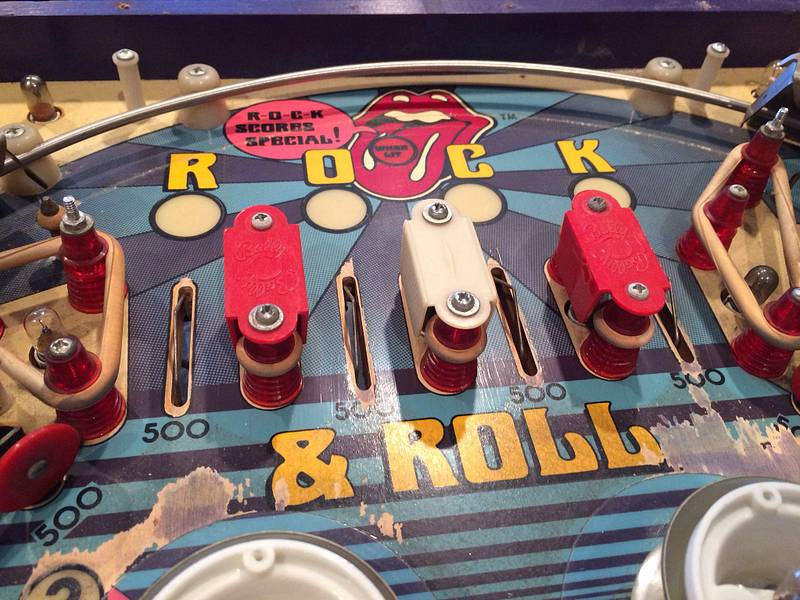 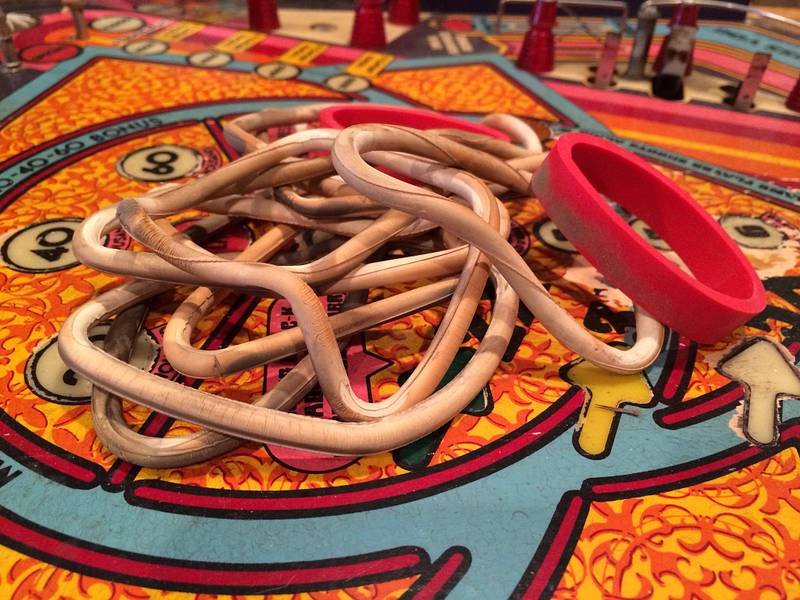 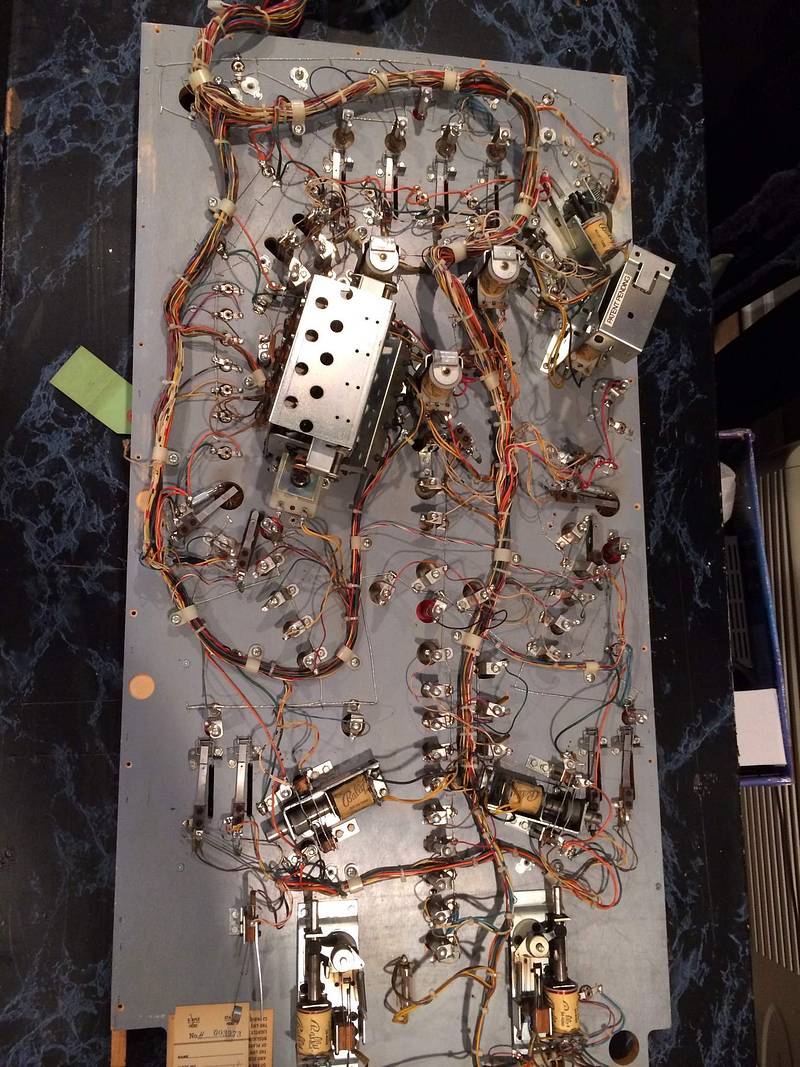 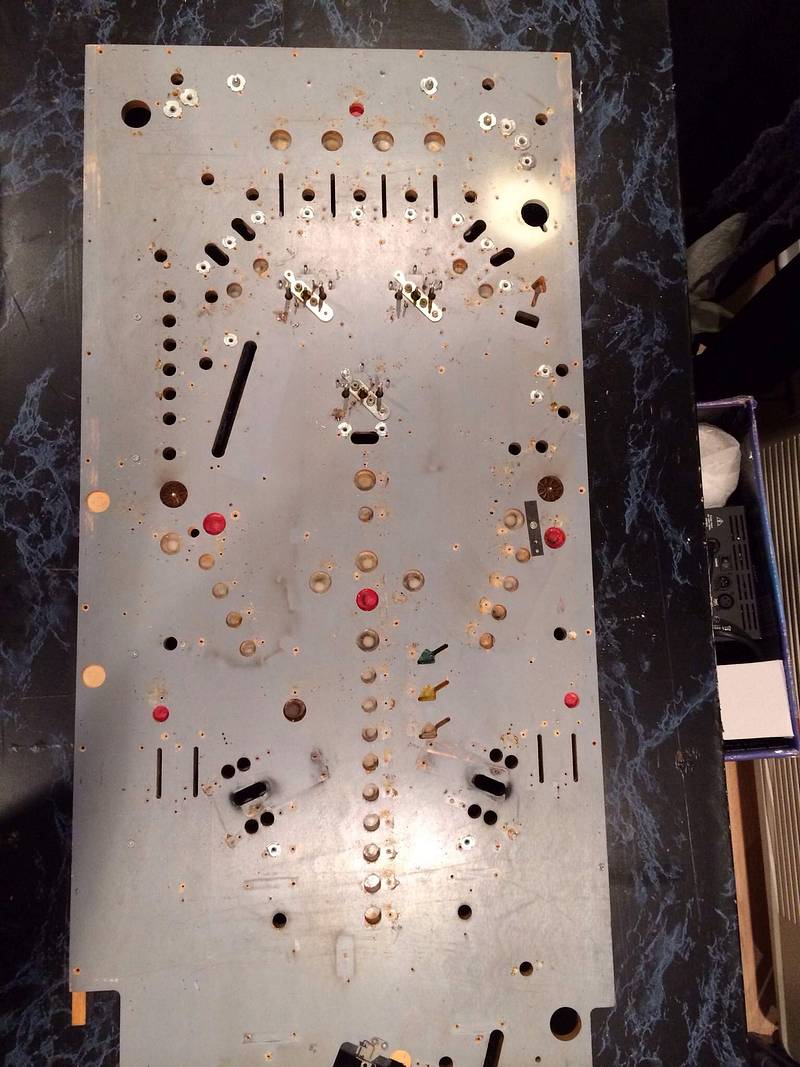 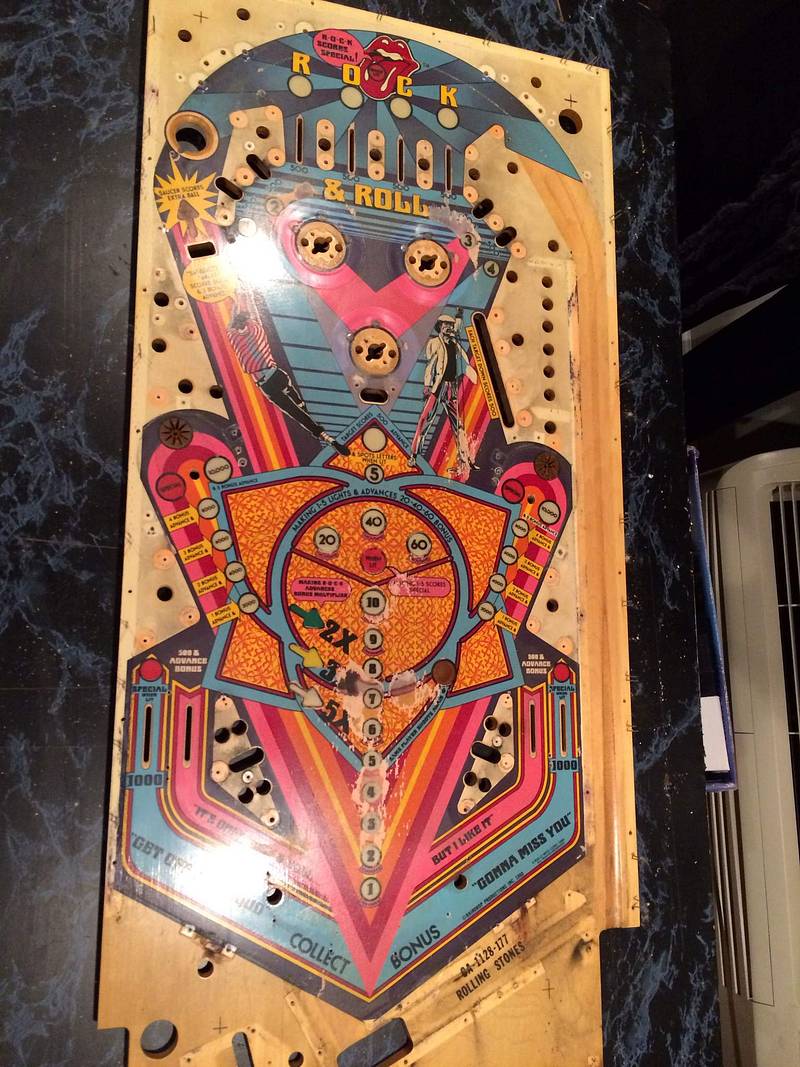 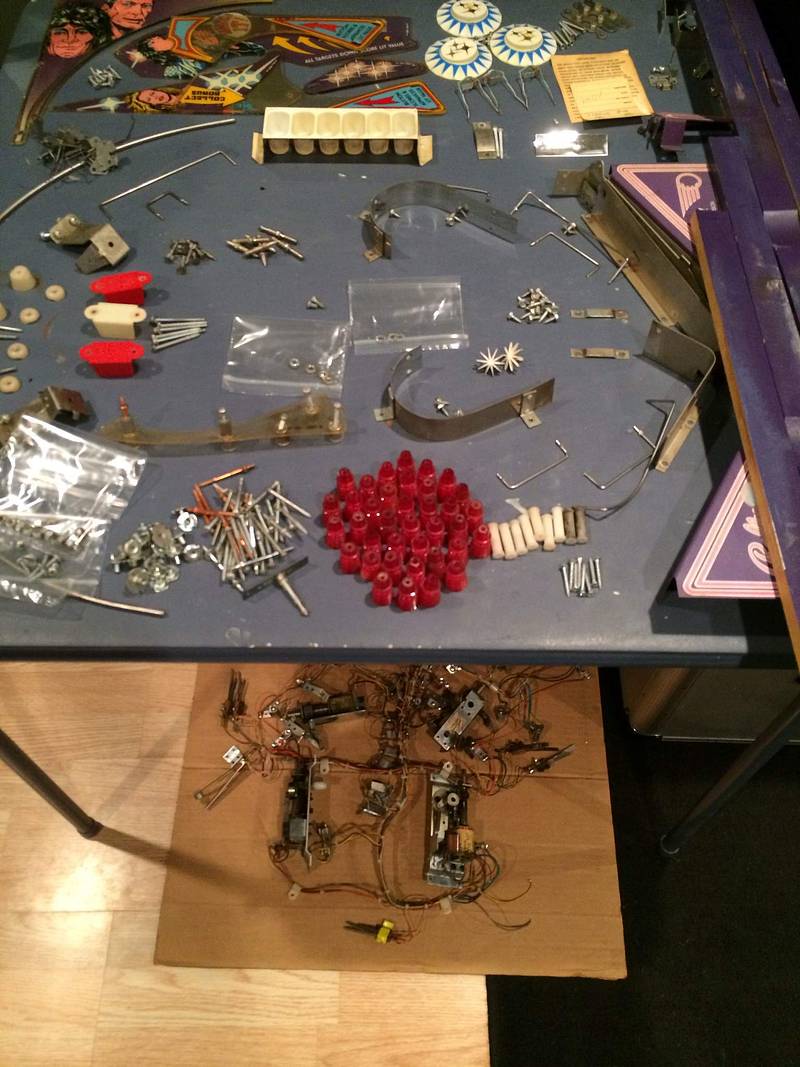 For the sake of asking, what are your plans for the old playfield?

It's not horrible, but not great either. It's pretty faded but I have stencils for it. That will probably be the next item to be restored. I'll post some pics later.

For the sake of asking, what are your plans for the old playfield?

I haven't decided, I may try to sell it to buy more parts.

Received it today, thanks!!

Yes, I think this is going to make a difference! 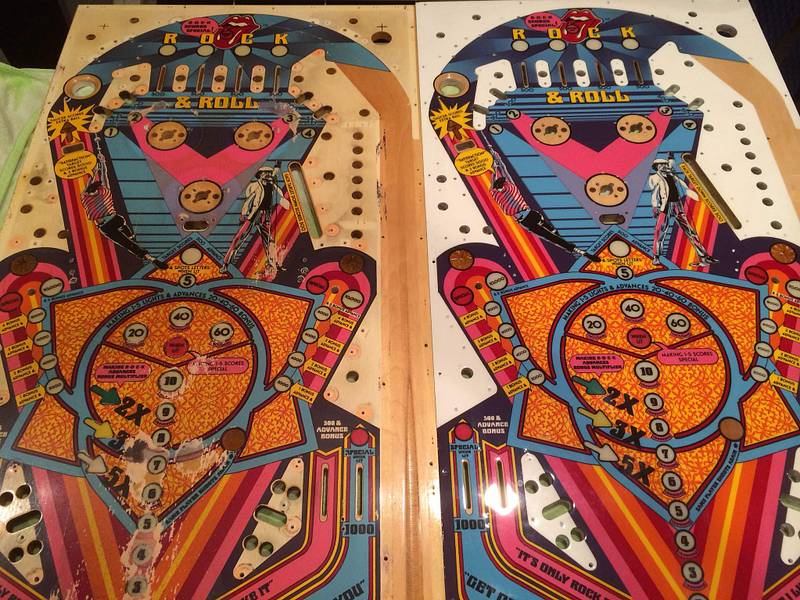 Having not really seen The Rolling Stones , I always thought it to be kind of blah. Seems like a lot going on. Personally I like it better than Kiss. 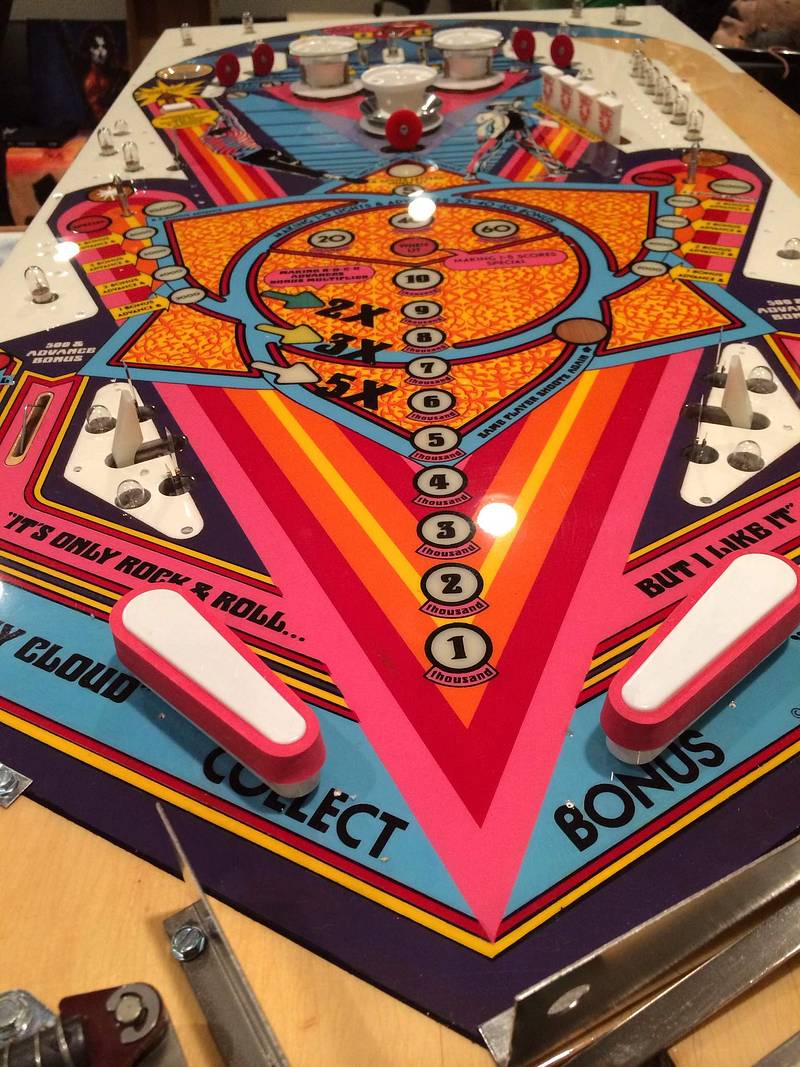 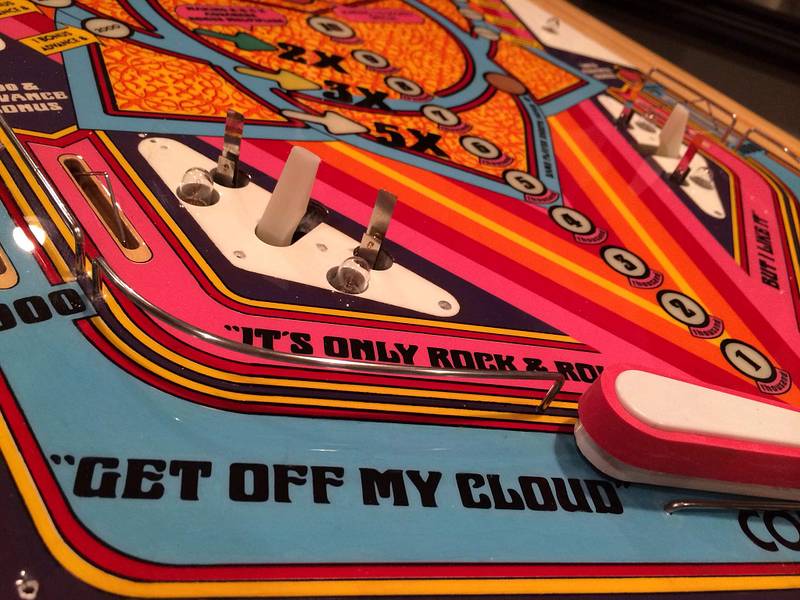 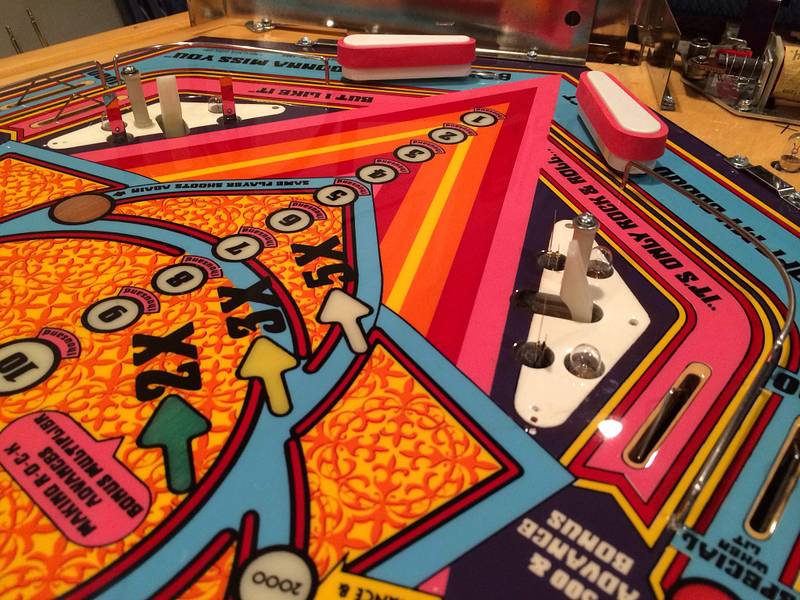 Glad to see the playfield has gone to goo use

This is a valuable machine. Like Kiss, it's value goes beyond pinball collectors.

Bally Rolling Stones might not be the greatest "player" ever made but it is a piece of Rock 'n' Roll history and one of the most sought-after copyrighted pieces of Rolling Stones memorabilia that will only continue to increase in price as time goes on. Only 5700 or so of these machines were made 35 years ago.

If you love classic rock music like I do, this pin is on the must-own list along with Kiss.

Now's the time to get one. They aren't going to get any cheaper.

Used a Dremel to remove the old rivets on the targets. It was kind of a pain but the new target faces look so much better! 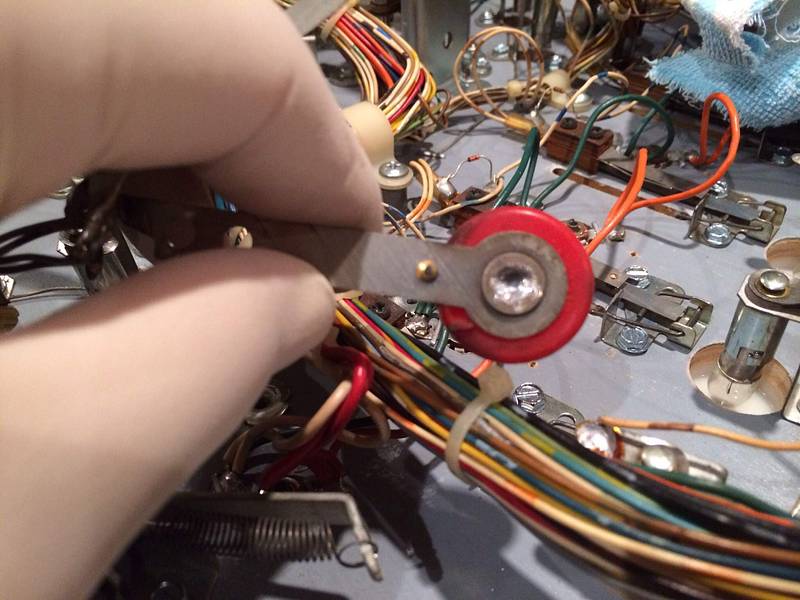 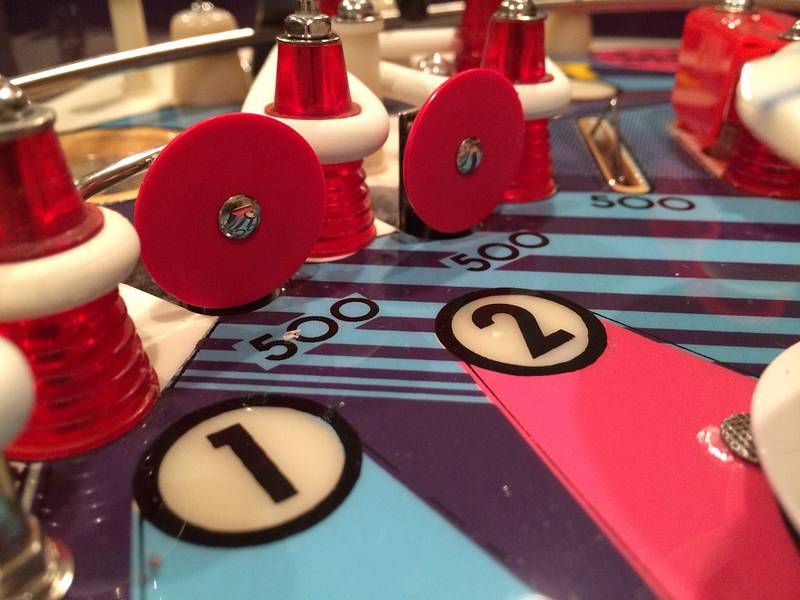 Had a new piece scanned and laser cut for the left side plastic guide near the saucer. 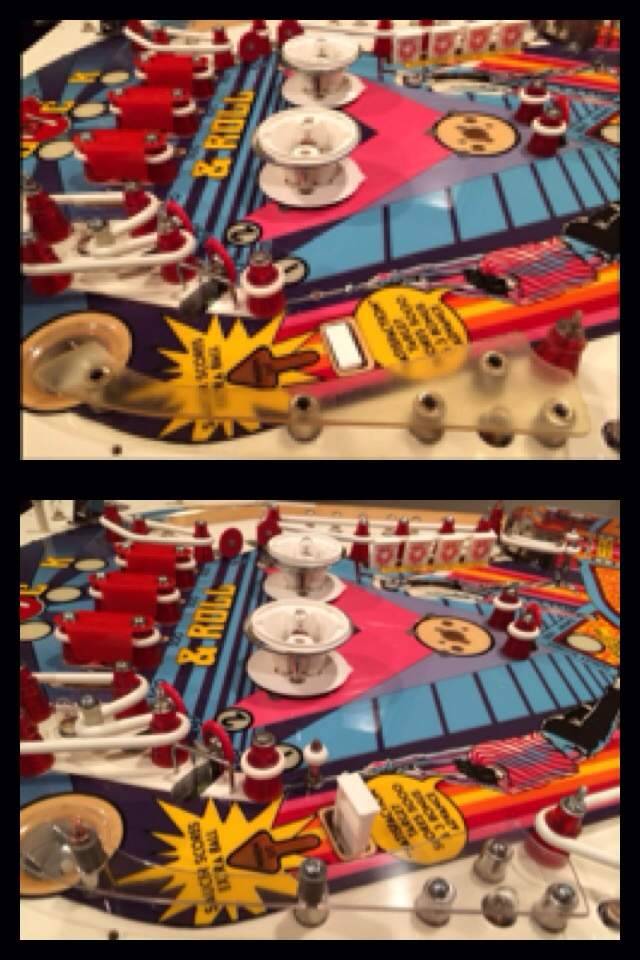 I was lucky that the "shadow box" was undamaged. I cleaned it best I could and although slightly yellowed, it looks great. I was not keen on the idea of stapling it to the playfield because the material seems very brittle. I opted to melt a small hole through each end and use a small screw to fasten. 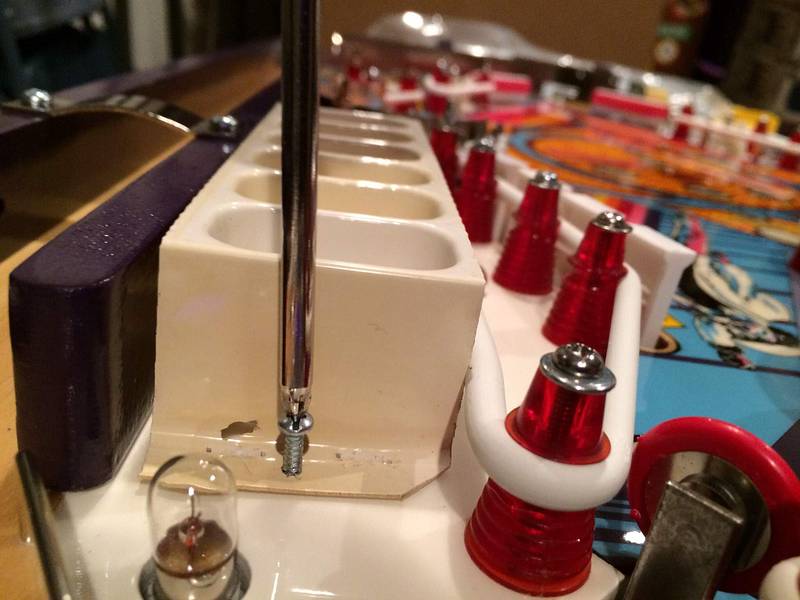 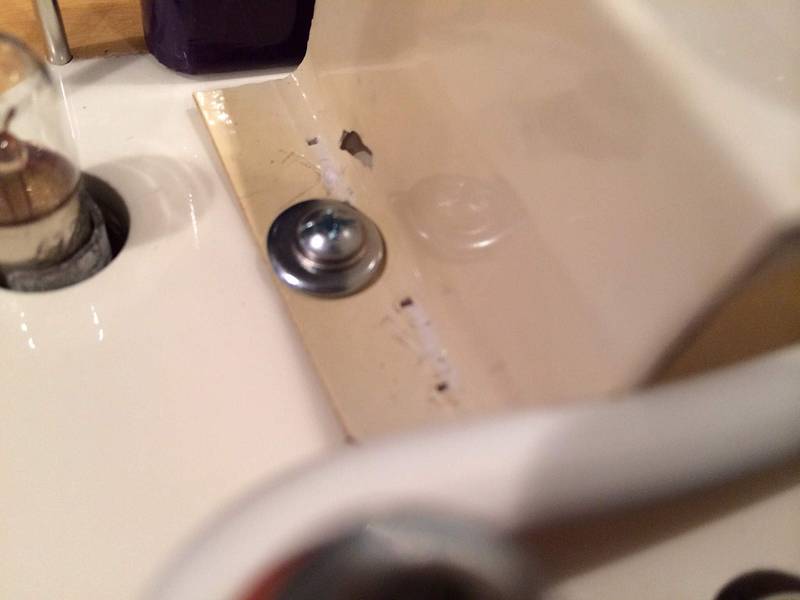 So, I get everything assembled and put the rails on. For some reason there is a HUGE gap between the left shooter lane rail and both the shadow box and rollover guide. I viewed some various pics online and realized that even on the game flyer there is a gap there. You can even see the edge of the white shadow box under the edge of the plastic which doesn't look good. I decided to move this rail out approximately .200" and painted the edge of the shadow box to match the rail color. The gap was all but eliminated and the result is much better looking. I will have to make a custom (wider) shooter lane support bracket at work but it's no problem. Overall this small mod made everything look much better. 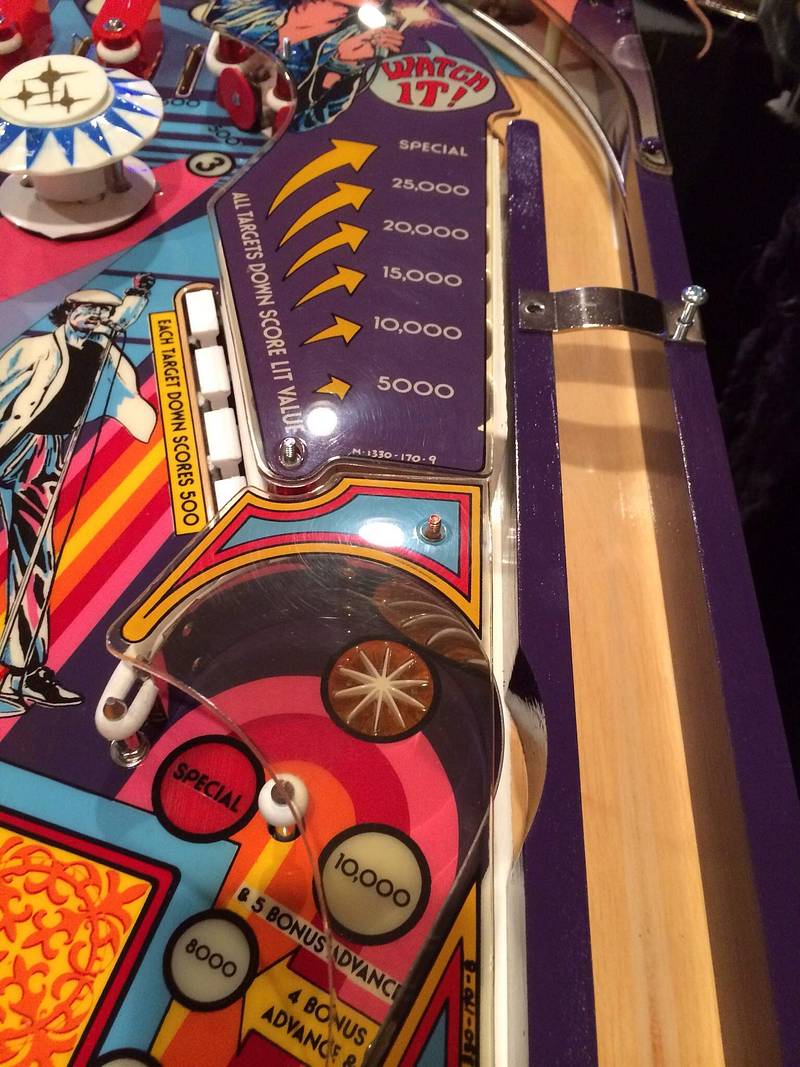 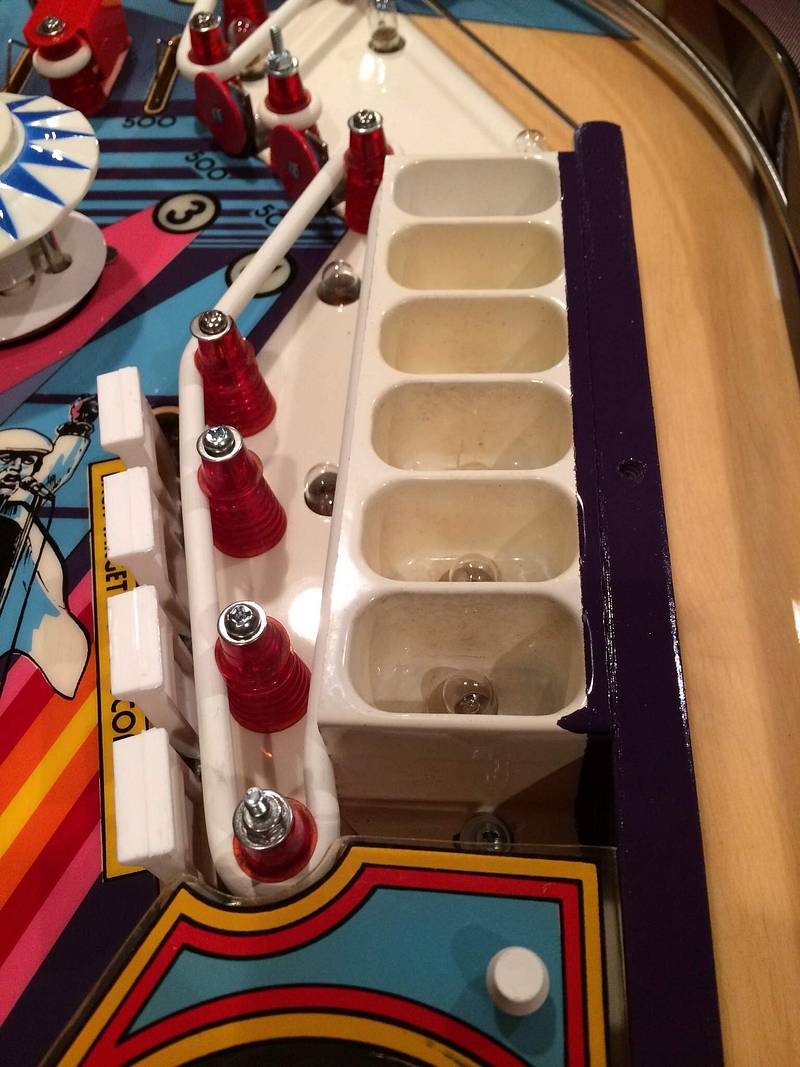 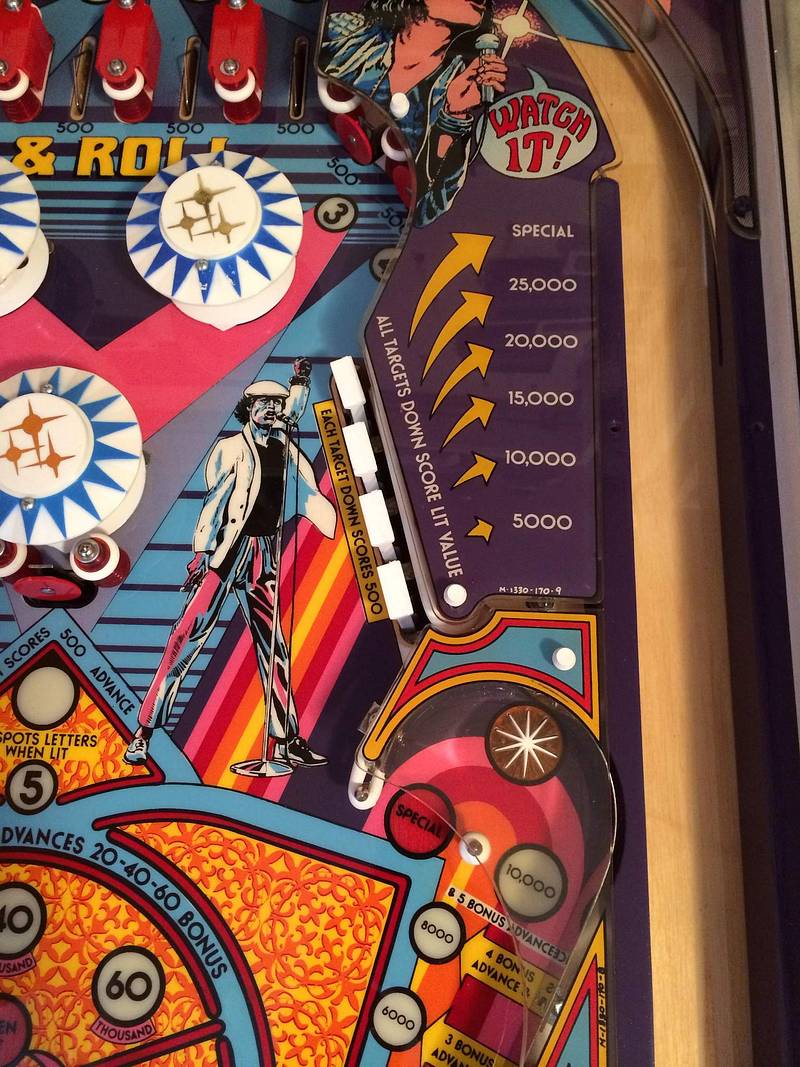 Looks amazing now all together.

Eric,
Youll have to let me play it when Im down in that area again

I restored the playfield and still never played one lol

Hope you replaced those gawd awful linear flippers with the older design.

Your original playfield is not in bad shape...would make a good restoration candidate for someone.

Hope you replaced those gawd awful linear flippers with the older design.
Your original playfield is not in bad shape...would make a good restoration candidate for someone.

Don't do it. The linears are better and are part of the "proper feel" that the game is supposed to have.

Rebuild them right and you'll never have a problem with them.

Eric,
Youll have to let me play it when Im down in that area again
I restored the playfield and still never played one lol

Absolutely, let me know when.

Looks amazing now all together.

Thank you Chad, yes I'm very pleased with how it turned out!

Apron repainted and new decal from Classic Arcades. Also made some custom cards and a cool keychain. 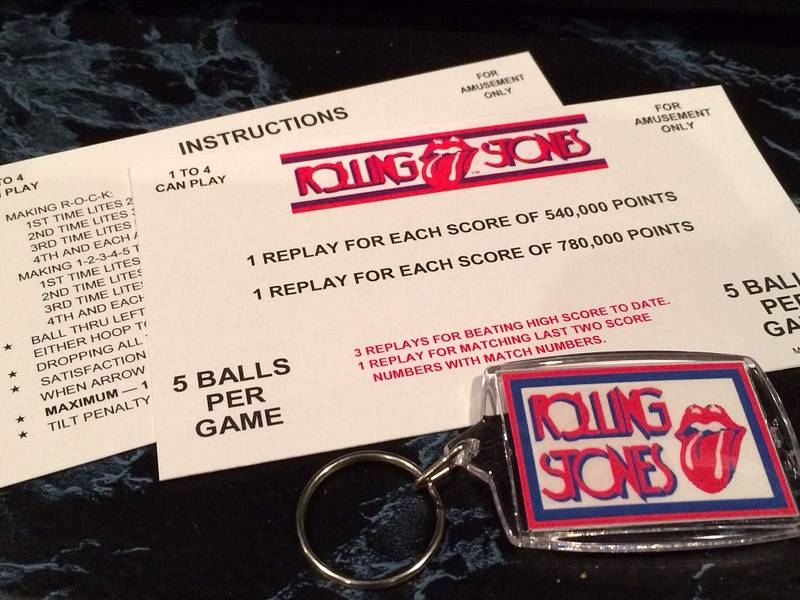 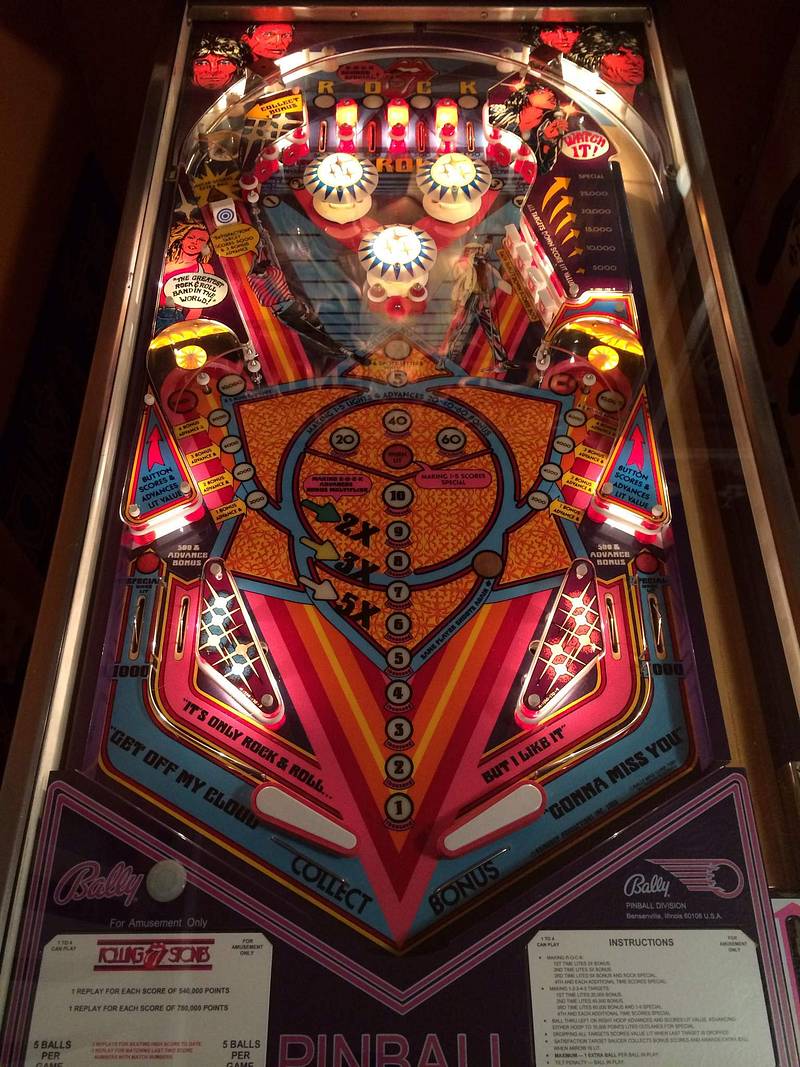 Looks nice man. You did a great job.

How's your backglass? Rolling Stones is one of the most-notorious backglasses for peeling and bubbling and finding a replacement that isn't also bad can be very challenging. It took me years to finally land an NOS one that wasn't priced in the stratosphere.

Looks nice man. You did a great job.
How's your backglass? Rolling Stones is one of the most-notorious backglasses for peeling and bubbling and finding a replacement that isn't also bad can be very challenging. It took me years to finally land an NOS one that wasn't priced in the stratosphere.

Actually, it's not too bad. There is one area (approximately 1.5" x 3") at the bottom where the paint flaked off. I have a piece I printed covering the area so it's not very noticable. I have a translite in right now minus the mirroring so it looks clean.

I bought a Rolling Stones and on the ride home in my car the back glass delaminated... change in temp no doubt. Real bummer. Was going to sell the machine simply due to the degradation of the back glass. But patience paid off... Located one in Omaha that was in a picture frame. Took a chance and $423 for the glass, packing and shipping. Held my breath when I opened it... NOS and perfect. Never had a lift channel on it. So now it's a keeper. Photo shows new (left) and delaminated Mick (right). Other than the delamination it's all there. 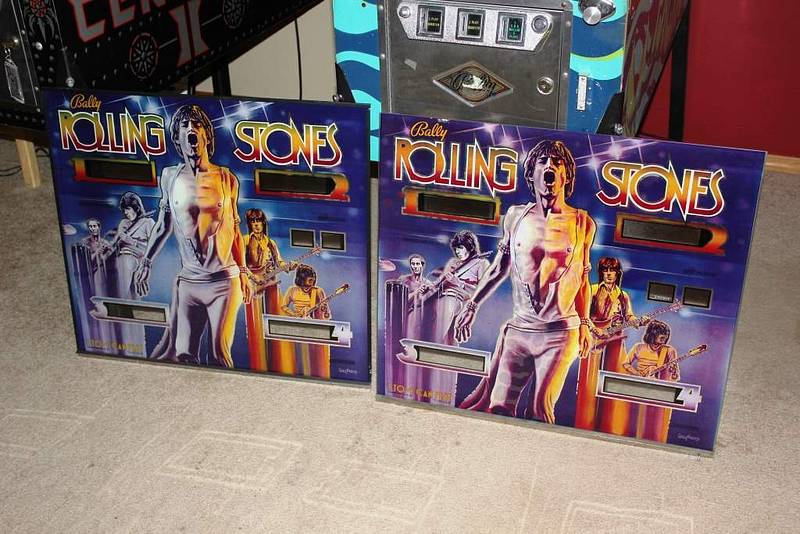 More on the back glass. My belief that temperature is the biggest enemy of back glasses. Specifically, temperature change...Glass and paint expand and contract at different rates. So now I use LED's behind my back glasses to reduce the heat. Photo of the back glass in the game and photo of the LED lighting. Super Bright reds behind "Rolling Stones" 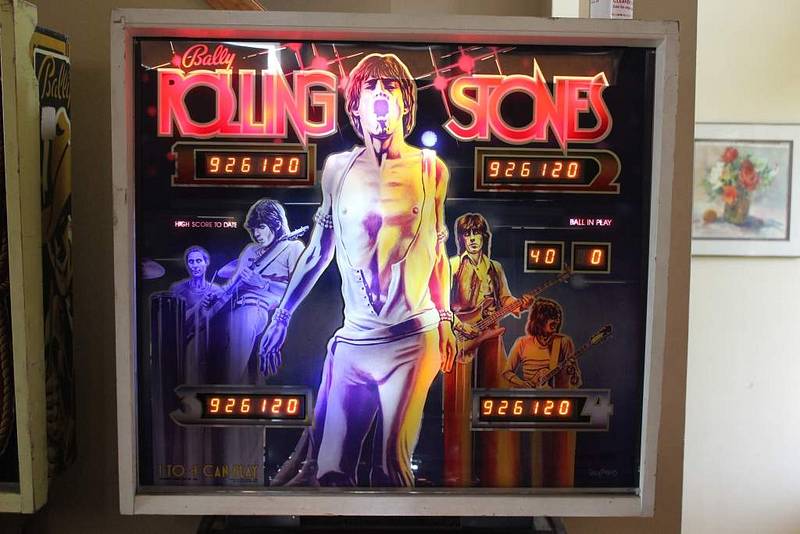 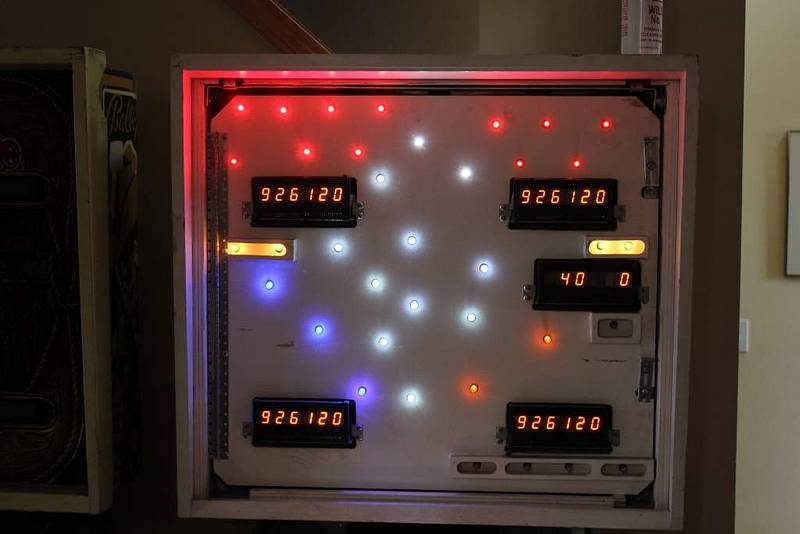 Here's what I put in my Rolling Stones cabinet a few years ago: 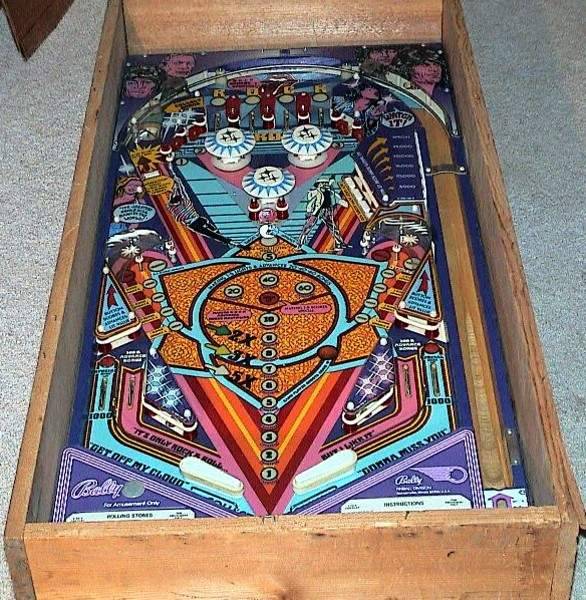 Here's what I put in my Rolling Stones cabinet a few years ago:

Had any of the inserts cupped?

Had any of the inserts cupped?

No it's pretty-cherry. The original playfield in the machine was already pretty-nice before, but nothing can beat a mint NOS assembly. It only has Mylar rings around the pop bumpers but came with the complete factory Mylar kit too. I haven't applied them though. The only thing that was wrong with it were a couple shorted lamp sockets. It came with a brand-new apron and cards too. Of course the rubbers were dry-rotted so I changed them out.

When I got it, I also received a second complete NOS plastics set and an NOS manual pack sealed in the factory envelope complete with cards and the flyer and the usual stuff Bally put in the envelopes. HTF stuff for this pin.

The original playfield in the machine was really nice and had a day-one Mylar installed. I replaced every socket and rebuilt it to like-new condition and auctioned it on eBay and got $1200 for it. I would have never sold it though if I hadn't gotten the NOS one.