I'm rebuilding my first Bingo and expected to see lots of similarities between it and similar vintage pinball machines. I've found a lot of differences though. Steppers and coils seem to be of higher quality. High voltage is used for the mixer and control motors. Everything in the bingo feels heavy duty.

Were the bingo engineers in a sperate building from the pinball engineers?

Also wondering if Bingo's were better built because of the potential revenue they could generated for an operator?

Were there a few "famous" bingo designers and engineers?

I've got a nice coffee table book of bingos, but it doesn't really talk about the engineering. Any interesting history of bingo from an engineering and manufacturing angle out there?

Love the history of our machines!
Allen

Bingos cost quite a bit more than contemporary flipper games. I don't have any price lists handy, but those are all very interesting.

There were two main bingo designers, Don Hooker for Bally and Lyndon "Lyn" Durant for United.

Harry Williams designed one for Williams and Ed Krynski designed three for Keeney. I'm not sure who designed Holiday for Keeney, but I don't think it was Krynski.

Don Hooker designed the ingenious circuitry you see and the descending diamond playfield.

Lyn Durant had a different approach to his circuitry. It required many smaller components instead of two larger motors. With the release of Manhattan, United switched to a Bally style setup.

Lots more to the history, but that's a start.

Here are several Bally price sheets from the late 1950s. As

bingopodcast explained, the games were expensive. They were good earners, and they had to be since they were subject to confiscation in many (probably most) of the jurisdictions they were operated in. Imagine the earnings your games would have to generate to risk losing, say, a half-dozen or more bingos in a police raid. One interesting tidbit is that operators often made cosmetic alterations to games so that police, often armed with just a list of prohibited game titles, would not recognize a relabeled bingo. I've attached several photos of disguised games. My favorite is "Bingo Gardens," a relabeled Cypress Gardens. I think some operator had a wicked sense of humor with that one. I remember playing a magic squares game in Las Vegas in 1976 - I think it was Broadway. That would have made the game 21 years old when I played it, and I'll bet it was operated continuously during those 21 years. Bally did strive for immortality, and the games were engineered accordingly. There is a commissioned history of Bally, "Bally: The World's Game Maker" by Christian Marfels, but it sticks to Bally's up-and-down corporate history and it doesn't go into the technical details you seek. It does mention bingos and Don Hooker, and it states that Hooker was on Bally's board of directors at one time! I was unable to find any other books authored by Marfels, and after reading his book, I think I know why. There also is a one-hour audio interview of Don Hooker somewhere on the internet. You should be able to google around and find it. 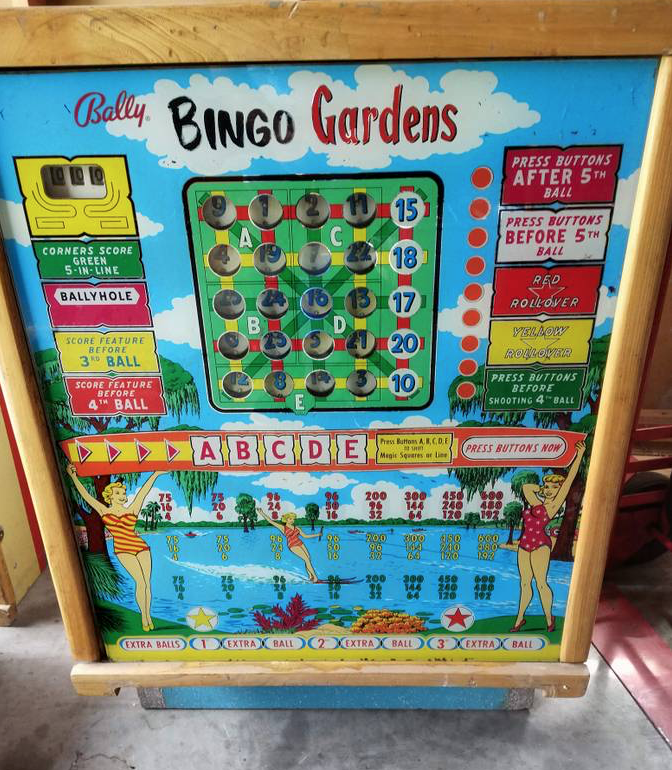 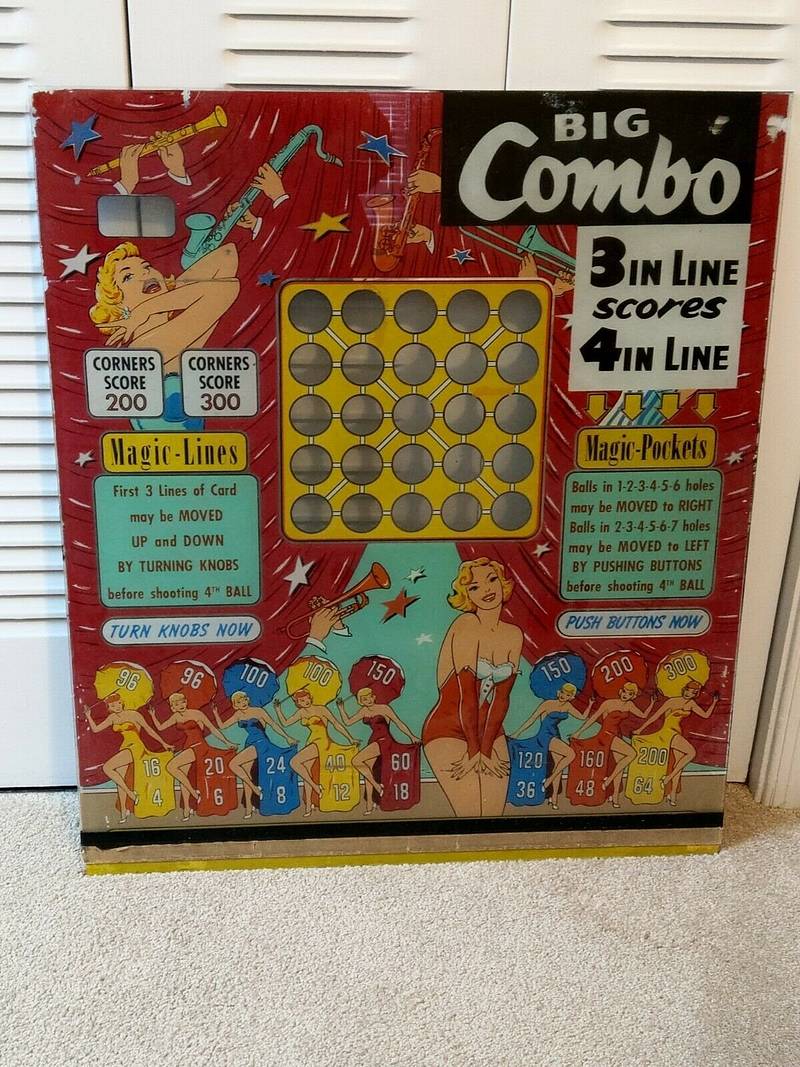 bally built bingos and the precursor one-balls almost exclusively for a 15+ year run. The oddball stuff thrown in was much simpler in design and wouldn't typically have needed the high torque/long running characteristics the 120V motors provided in the bingos.

the rest of the stuff like relays, trip banks, ball lifters, and stepper units were the same.

it was the Korpran decision in 1957 that federally classified a bingo as a gambling device that shook things up. That ruling impacted the distribution chain and made it easier for law enforcement to deal with bingos (often with axes and sledgehammers), so demand went down and bally switched more capacity to "novelty" games.

overseas sales, especially Belgium, and a few areas in the USA where the machines were either explicitly legal or widely tolerated kept bally making bingos until 1980.

the game internals changed along with the flipper games ... better/smaller motors, more use of plastics, molex connectors, the shorter switch blades with the rounded ends, and even the occasional circuit board with transistors and diodes. Bally's more-or-less last bingo was completely solid state with only a ball lift and shutter motor remaining.

the introduction of the bally 742/742A slot machine in the early 1960's also kicked off a huge business for bally, so the dwindling bingo sales weren't a huge problem

BCB, would you have a copy of a price list including a Bikini machine?
I have never been able to find one.
Terry K

The oldest and newest Bally Price Lists that I have. No Bikini. Sorry. 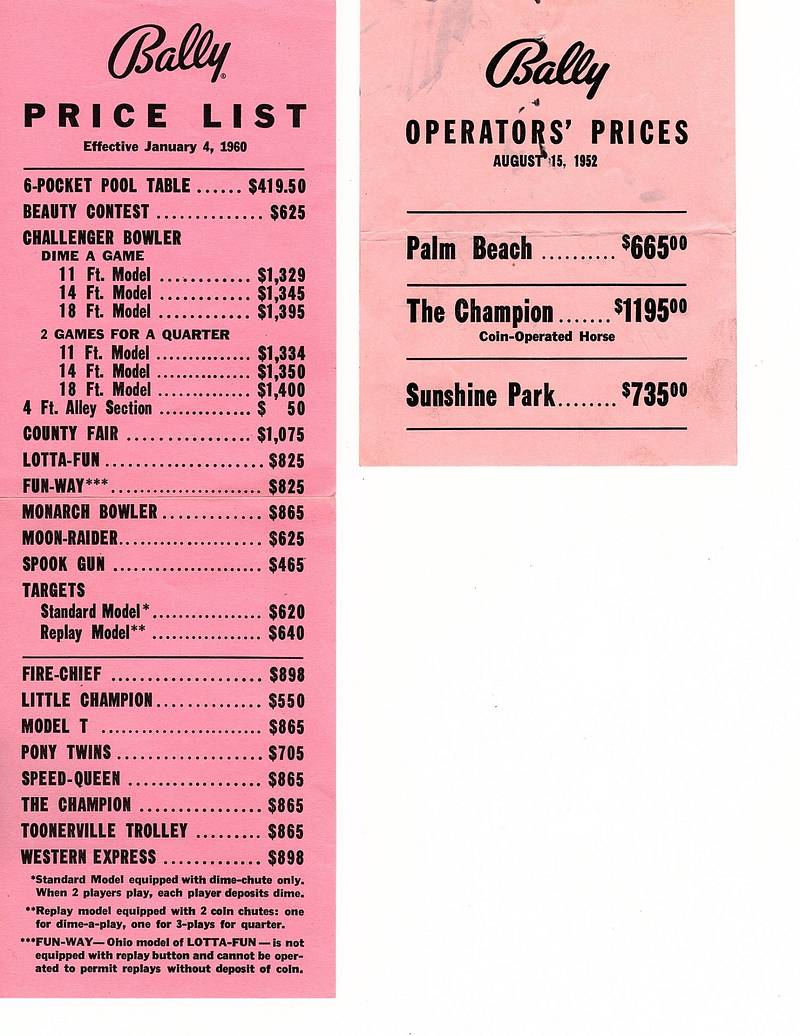 BCB, would you have a copy of a price list including a Bikini machine?
I have never been able to find one.
Terry K

I've seen the Bally price lists pop up on eBay (where I got mine) from time to time, so they are not that rare. I've never seen one more recent than the sheet that lists Laguna Beach (6/1/60). I suspect Bally discontinued the price sheets, at least in the flyer format, shortly before your Bikini was manufactured.

Great thread! From bingos I've worked on it seems like later games were
based on the very earliest designs with features added. In other words there
was a core of basic bingo features which could be found in just about all
of them.
Steve

Also wondering if Bingo's were better built because of the potential revenue they could generated for an operator?

More like the inverse: better built because a problem could cause the operator to lose serious money. I heard that from Don Hooker when he gave a presentation at one of the earliest Pinball Expos. That may be the source of the one-hour talk referred to in post #3.

The Marfels book was an authorized corporate biography, if you get my drift. There would be a lot more to say about their corporate history, if someone wanted to dig.
.................David Marston

Wow, so much great information! I believe Kryzinski also designed many pinball games, but am not sure. I'm betting Bally artists did work for both Bingos and Pinballs. The art and style are very similar.

The operators did a pretty slick job changing game names. They must have had a good laugh when the law came looking for them only to find games not on the "list".

I'll bet some of the ops had to pay vig / insurance to the local mobs.

Thanks for all the great info. You bingo forum participants know your game!

I believe Kryzinski also designed many pinball games, but am not sure

He did - he was scooped up by Gottlieb and designed many many games for them in the metal rail EM era-early solid state.

I don't have a ton of EM slot experience, but I was surprised to see a blatant rip off of the Bally mixer unit in a flasher I worked on from a company called Auto-Bell. They may have had some kind of relationship to Bally, haven't looked that deeply.

I'm betting Bally artists did work for both Bingos and Pinballs. The art and style are very similar.

Yes, the art for all games was outsourced to just one or two shops. The primary artist, as far as I can tell, on most bingos from Bally and United (until about mid-60s) was George Molentin.

mixers no. The slots used the reels as a random rotational device, but the wipers weren't part of the rotating pieces.

stepper units were the same in the slots, and some later slots had cam driven switch stacks like the replay cams. Some bally pinballs used a similar motor driven cam shaft.

the EM slots are a lot simpler than the bingos electrically, but have more mechanical stuff to deal with randomly spinning the reels.