I'm having an issue with the Bally Atlantis I just finished restoring (well, almost finished restoring). It plays perfectly and all the sounds are correct, except there's no voice. At first I suspected the sound roms, so I burned and verified new ones. No change, still no voice. Next, I noticed all boards matched (by serial number) except the sound board, which is a Williams D-11581. Bally used this Williams board on a few 6803 games (I'm guessing after they merged). The sound board in my game had Taxi written on it, so I suspect the previous owner replaced the original board with another D-11581 from a Taxi.

That's all fine, but then I noticed in the manual that a 55516 at U6 recreates Atlantis speech. I thought that was likely my issue and was going to test the chip. I looked at my board and saw that U6 wasn't even populated on my board! I searched through my supply of boards and found 2 more D-11581 boards. Guess what? Those boards were also missing U6.

I believe all my boards are earlier versions of D-11581, and later board revisions added and populated U6 with a 55516. I have a 55516 I found on an early Williams board, and can easily desolder it, add a socket to U6, and populate it. The issue is there are many more components missing on all 3 of my boards compared with pics I've found of D-11581's that are original in a Bally Atlantis.

I'm guessing others have run into this same issue, but I can't find it documented anywhere. Does anyone know what other components on earlier versions of this board need to be populated in order for the voice to work? I may end up populating everything that isn't on my board compared to the later revisions, but I'm guessing some components aren't necessary as the boards were also used in some Williams video games.

Anyway, I thought I'd give it a shot here first before I dig into this too much to try and get the voice to work. Since other components are not populated, I'm also thinking that just replacing U6 won't work (although it's possible it could). Of course, my theory could be wrong about all this and something else could be preventing the voice from working. If that's the case, I can find and start digging through the schematics before replacing any components. 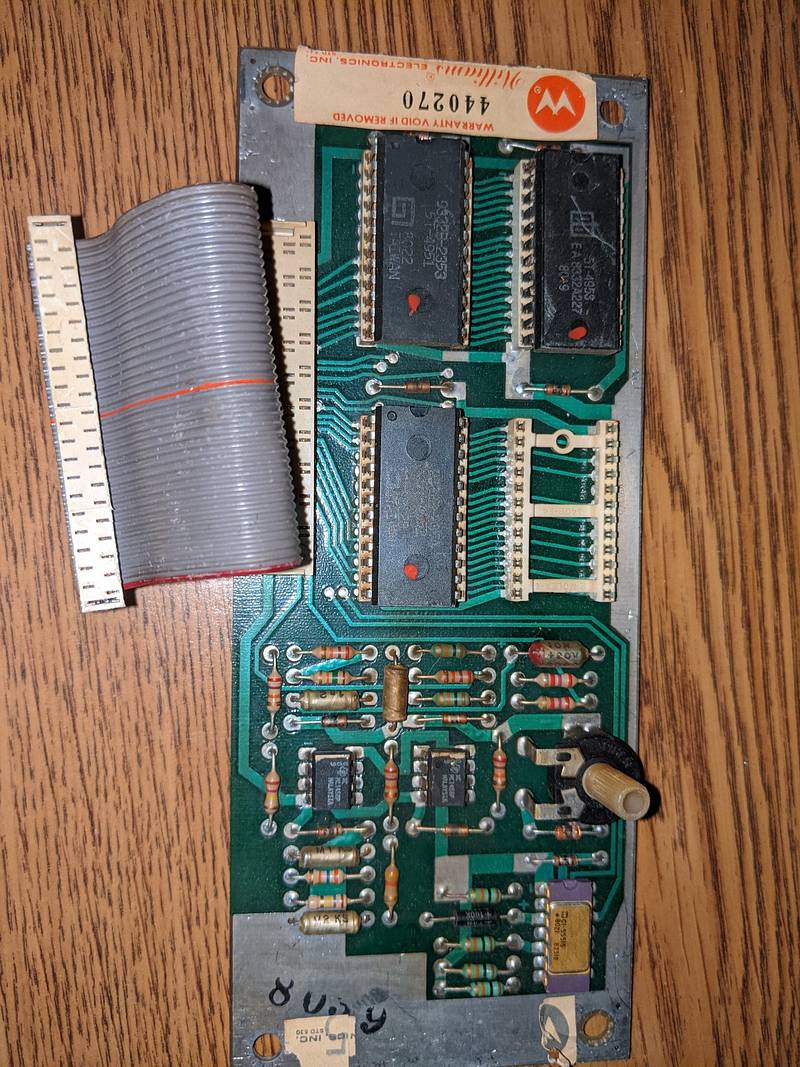 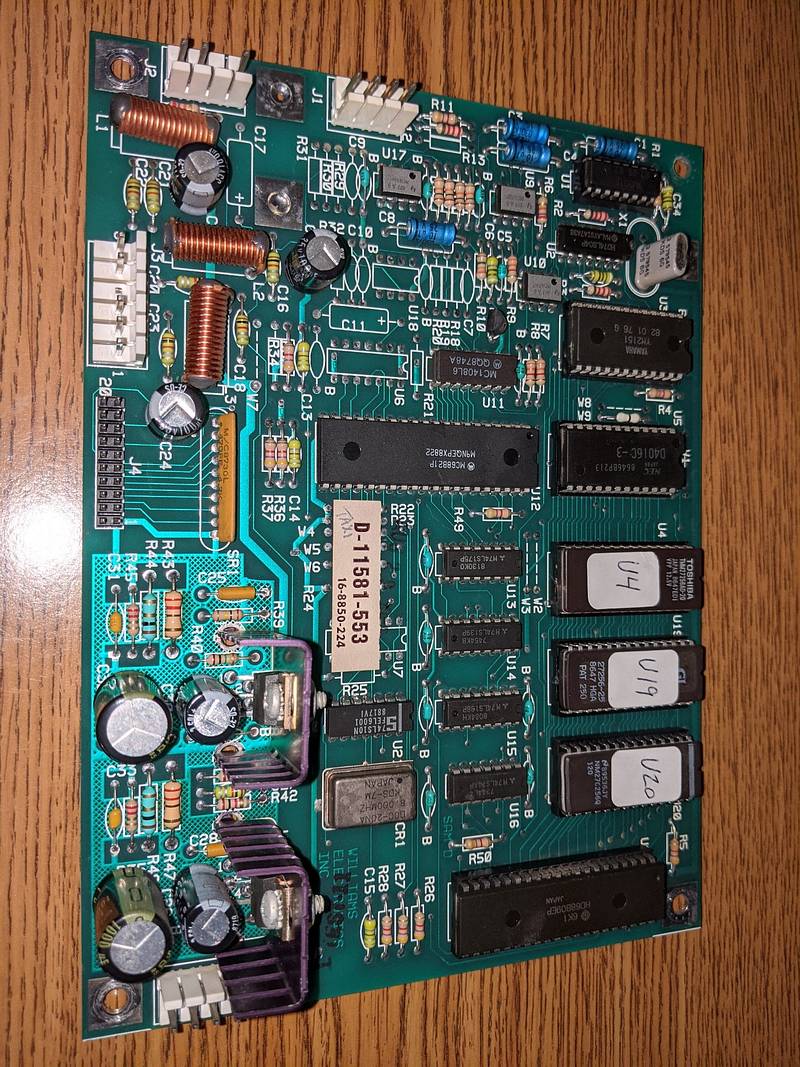 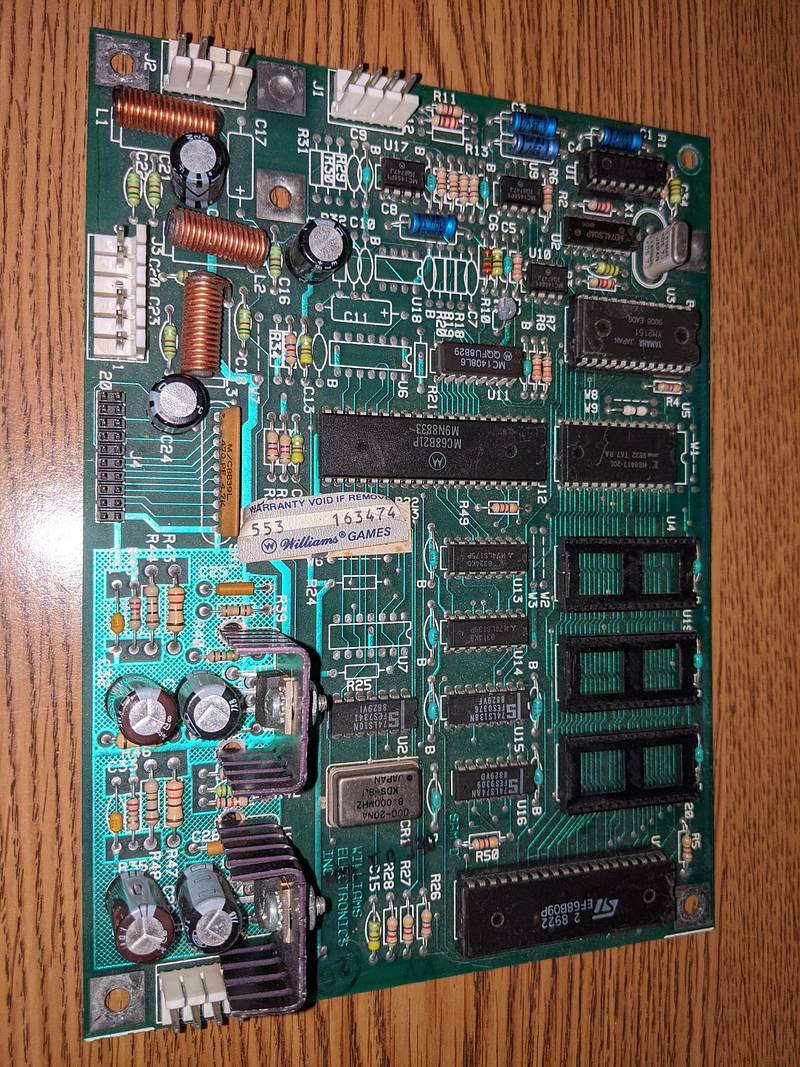 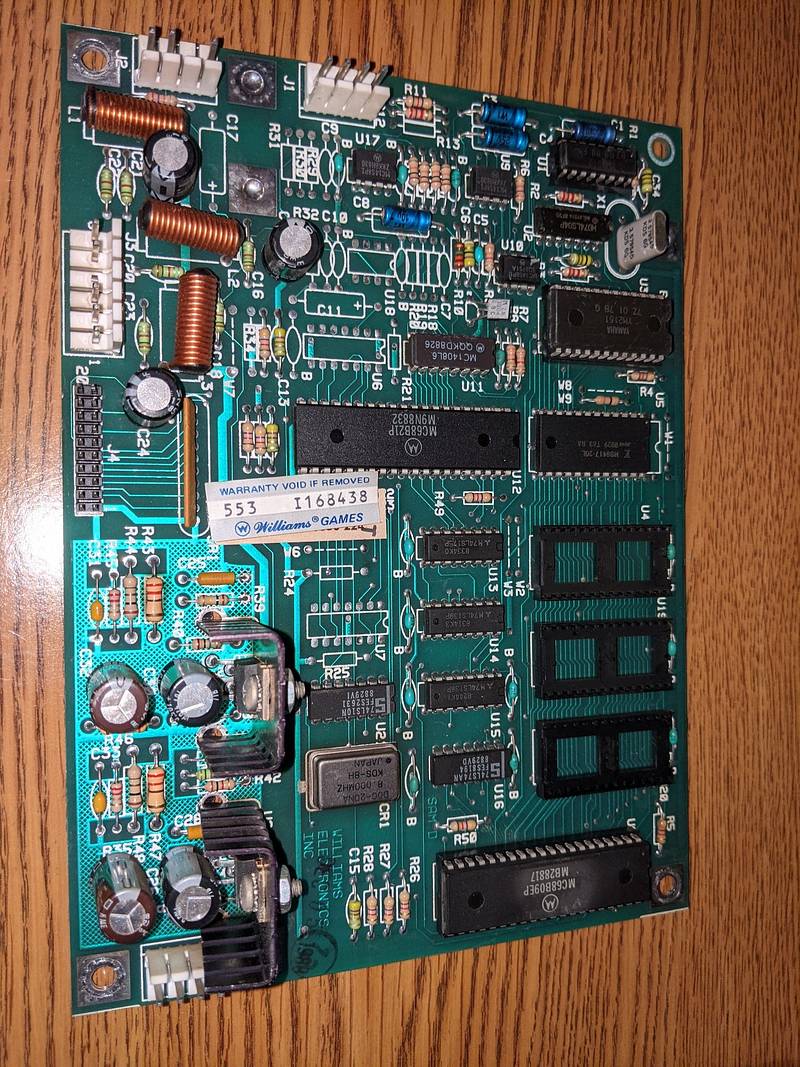 When I had a Bally Atlantis it used to lose speech when I first had it. I had to power off, and wiggle the sound interface ribbon cable and reboot the machine to get it to work. Replacing the 20 pin ribbon cable that connects J4 on the D-11581 sound board to the small sound interface board corrected the problem

I added a socket to U6 and added the 55516 chip. I didn't expect it to work but tried it anyway, no change.

My next step is to add a 74LS74 at U7. The schematic in the copy of the manual I have is very hard to read, so it's tough to make out most of the components and their locations. I'll need to find a better copy of the sound board schematic before I can proceed further.

When I had a Bally Atlantis it used to lose speech when I first had it. I had to power off, and wiggle the sound interface ribbon cable and reboot the machine to get it to work. Replacing the 20 pin ribbon cable that connects J4 on the D-11581 sound board to the small sound interface board corrected the problem

Thanks for the reply! I suspected it could be the ribbon cable, but then stumbled on the board differences. I'll give it a try!

I swapped out the ribbon cable and unfortunately it didn't change anything.

I don't think you can use that sound board with Atlantis with all the depopulated components. U6 would be the CVSD, a speech coding IC. It all appears the entire "channel" for this section is missing.

I don't think you can use that sound board with Atlantis with all the depopulated components. U6 would be the CVSD, a speech coding IC. It all appears the entire "channel" for this section is missing.

Yes, that's exactly what I'm running into. I already populated U6 with the CVSD. I populated U7 with a 74SL74, and R25 with a 4.7k resistor (after removing the caked on sticker blocking them). Looking at the schematics I'm missing a ton of other components in the chain. Some I don't have, and some I can't make out on the schematic.

I'm sure it can be done, just a lot more work than I was originally envisioning.

Wish you well. I have a MA and a BR that both have no speech, but all other sounds currently. They do have the correct boards installed for the game though.