Are you missing some GI over in that corner?

Does anyone know what these mystery wires are for on Motordome? Some kind of light

As was indicated, it's a GI socket. 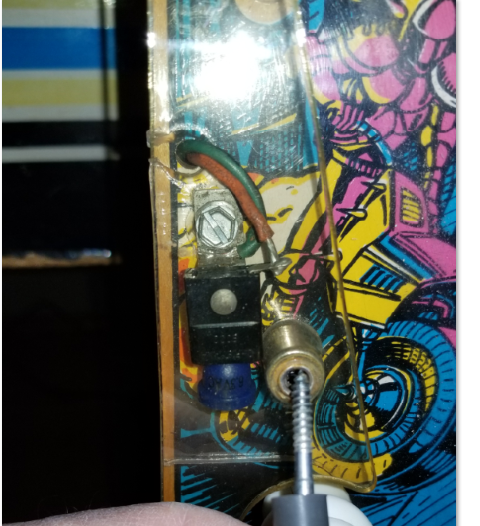 Yeah its a bulb sicket that kays flat. I wouldn't worry about it too much,it only blinks when a ball goes through the gate,barely noticable.

Sweet, thanks guys! I just needed to know because...

I'm working on some brand new ramps for this game, as I am about to swap in a nice new playfield into mine! 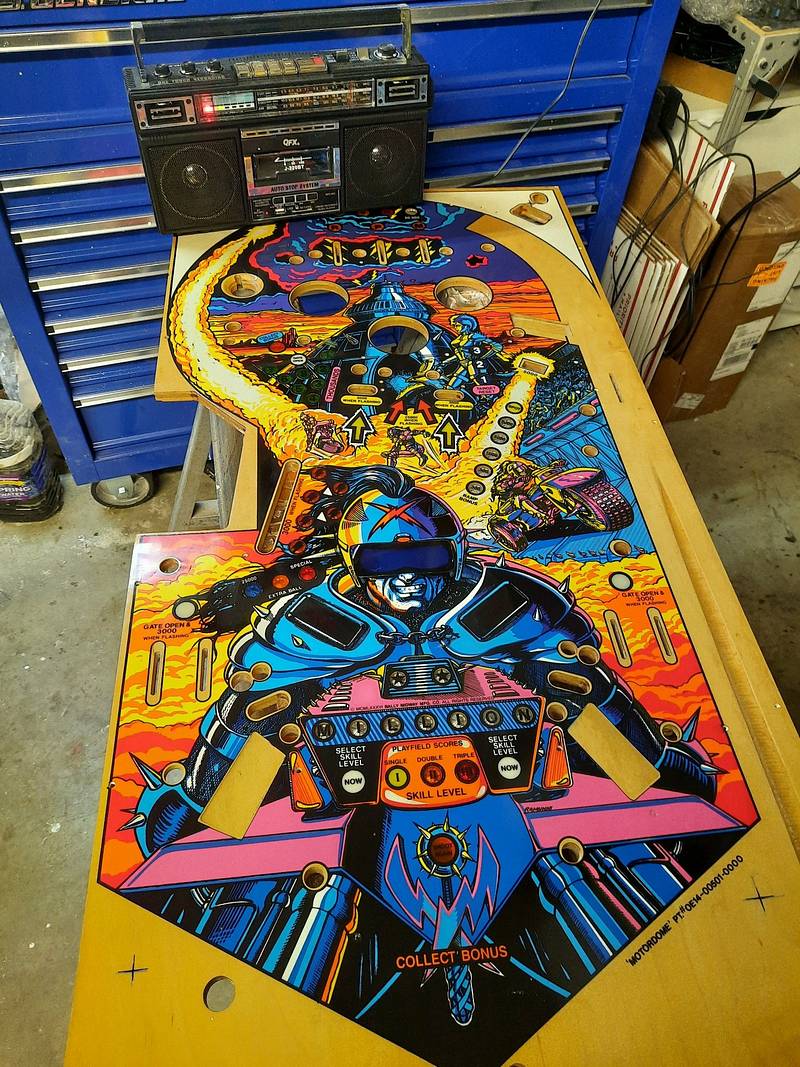 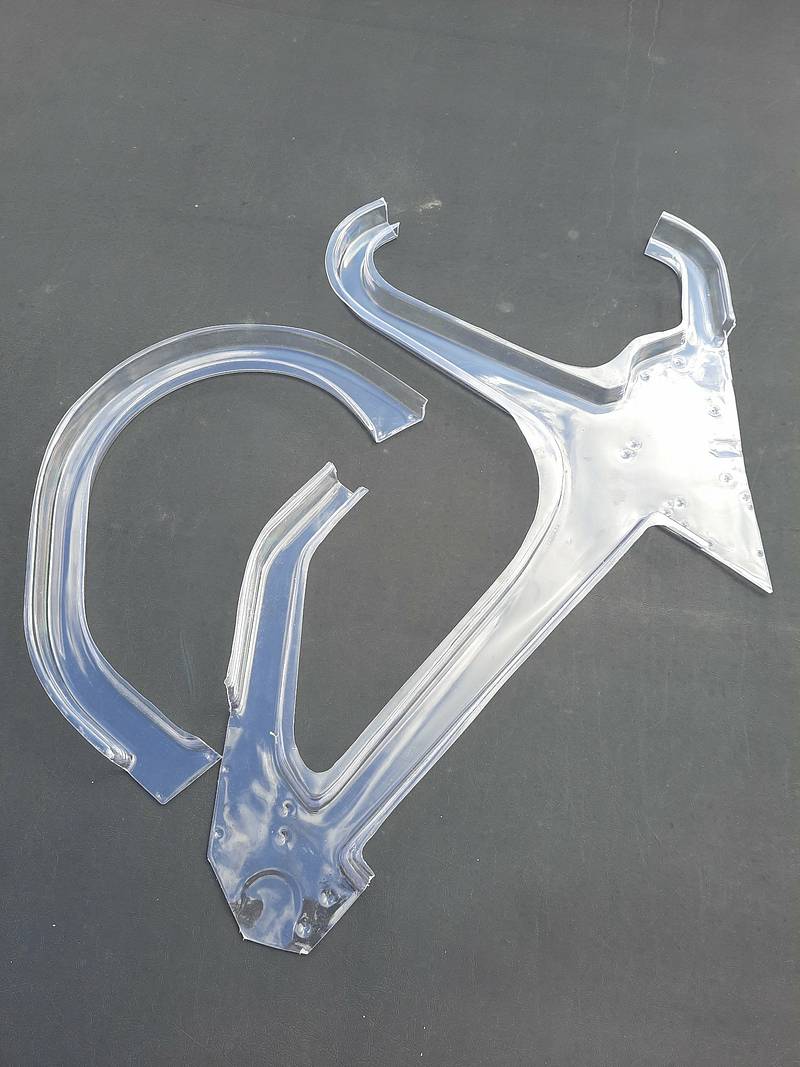 Does anyone know what these mystery wires are

According to Todd - "one lousy little light bulb".

Today I rolled over my Truck Stop. I got the crazy 5M jackpot, which gave me two replay levels at once -- later at 6.5M I should have gotten a triple-replay award according to the factory-standard attract mode announcement-- but I cannot remember a triple-knock).
So all I have in the end is 3M and I didn't make it into the High Scores!?! Is this really it for the 6803 basic operating system?

I did this with mine also
Kinda of a bummer

Yeah its a bulb sicket that kays flat. I wouldn't worry about it too much,it only blinks when a ball goes through the gate,barely noticable.

Edit, my mistake. It flashes in sync with the turbo booster station on the top right when it is activated. Doesn't provide any gi light but more of an effect. 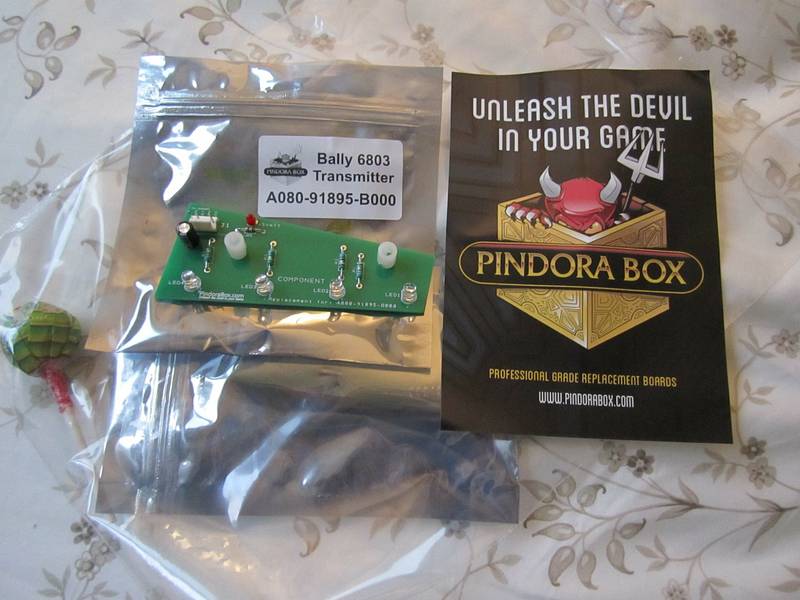 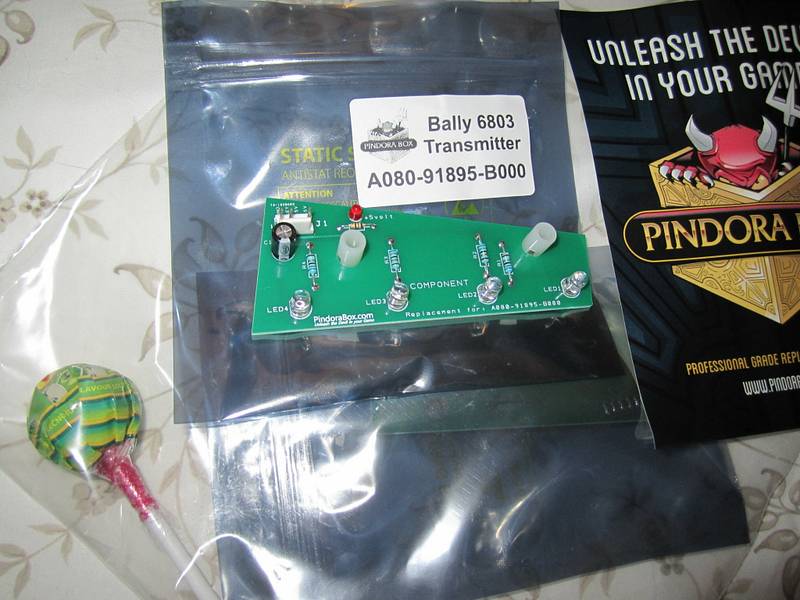 For future searchers, here's the answer.

There is a second set of playfield support brackets on the underside of the playfield near the far end. Lift up the playfield until it is about a 70 Degree angle (almost vertical). Lift it off the pins the brackets pivot on mounted on the inside of the cabinet, and take it up higher, until the back brackets can slide on to the pins in the inside of the cabinet. Lower it to a horizontal position, supporting the front edge with something, so it does not rest on the mechanisms and wiring.

You can now easily access the switched and lights on the back panel of the playfield.

It was not that difficult, but I did not see the back brackets at first.

Have fun with your game!

Post last edited 20 days ago: “Did not link to original post and included game title and machine name.”

Picked this up tonight. Probably going to have some questions so glad there is a club!

I just finished applying my own custom graphics over the generic Bally. I kept it somewhat motorcycle and MadMax. The whole thing cost me $26 using the public library vinyl printer. 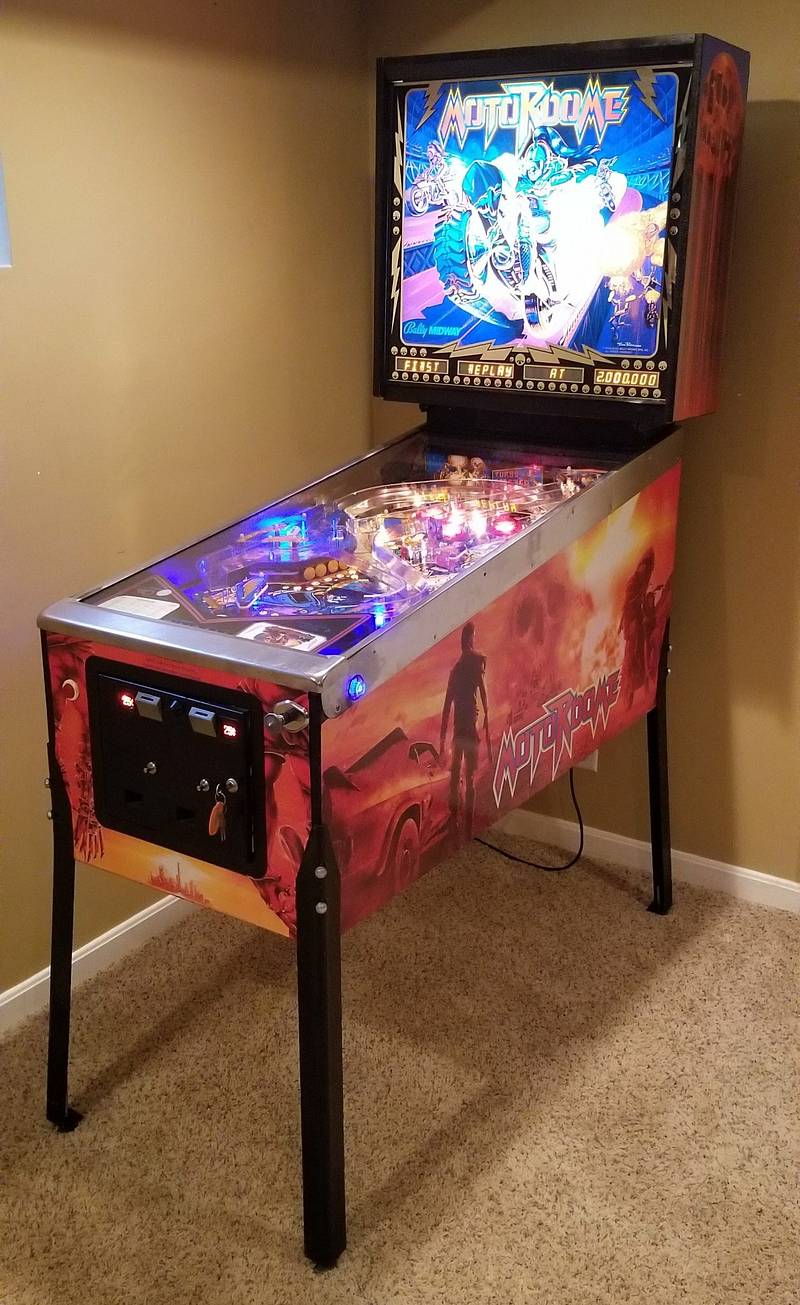 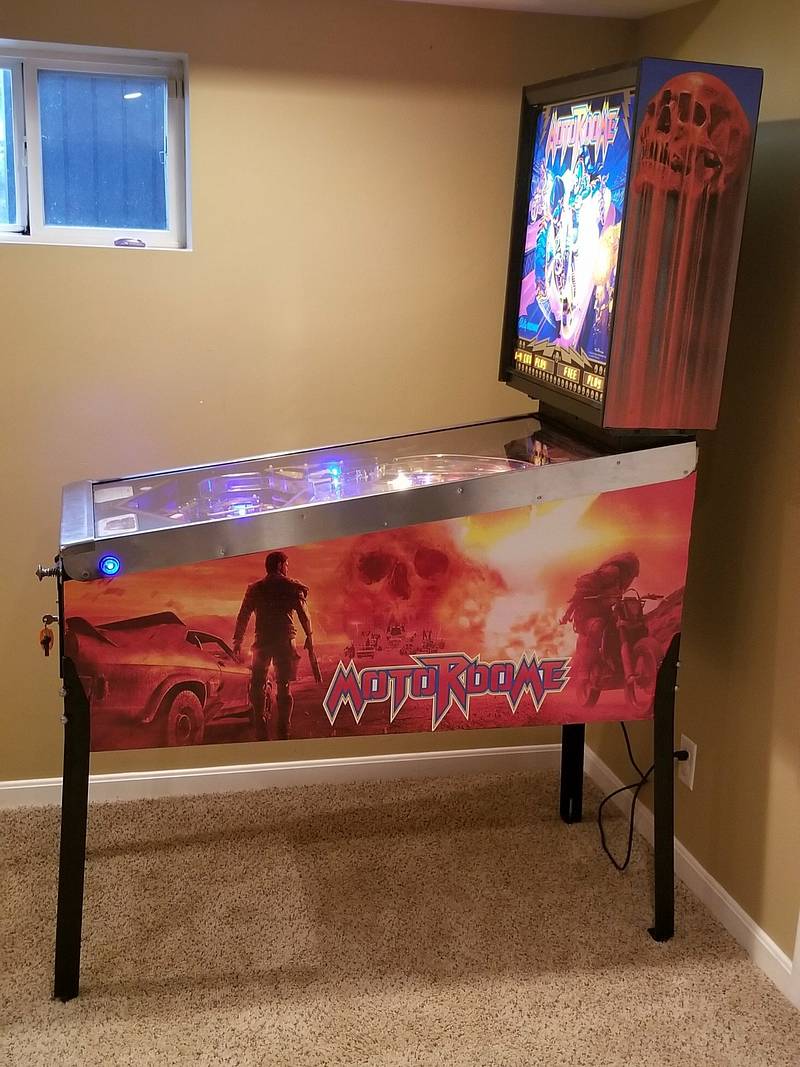 I just finished applying my own custom graphics over the generic Bally. I kept it somewhat motorcycle and MadMax. The whole thing cost me $26 using the public library vinyl printer.
[quoted image][quoted image]

That's great, I went by a professional print shop once, they quoted $1000!
I laughed all the way out the door.
Oh, sorry, its was ALMOST $1000, went back to my emails:

Not sure if every library has one,I just payed for yhe material. Its the same quality as what you get from other sources.

So my upper left flipper wasn't working. Turns out the coil stop and coil fell off. Put it back together and works great.

1. 2 pops aren't working. Left one has one wire disconnected (on purpose apparently) and middle pop is missing coil.

4. Target bolt 2 and 3 give errors on power up and either score automatically or don't score manually or both.

Can someone take some pictures for me of these areas? So I can see how to wire back up? Any idea why all these things would be disconnected intentionally?

Ideas on the light issue?

Disconnect the caps on target bolt 2 and 3?

Have you ever seen a game so damn dirty? 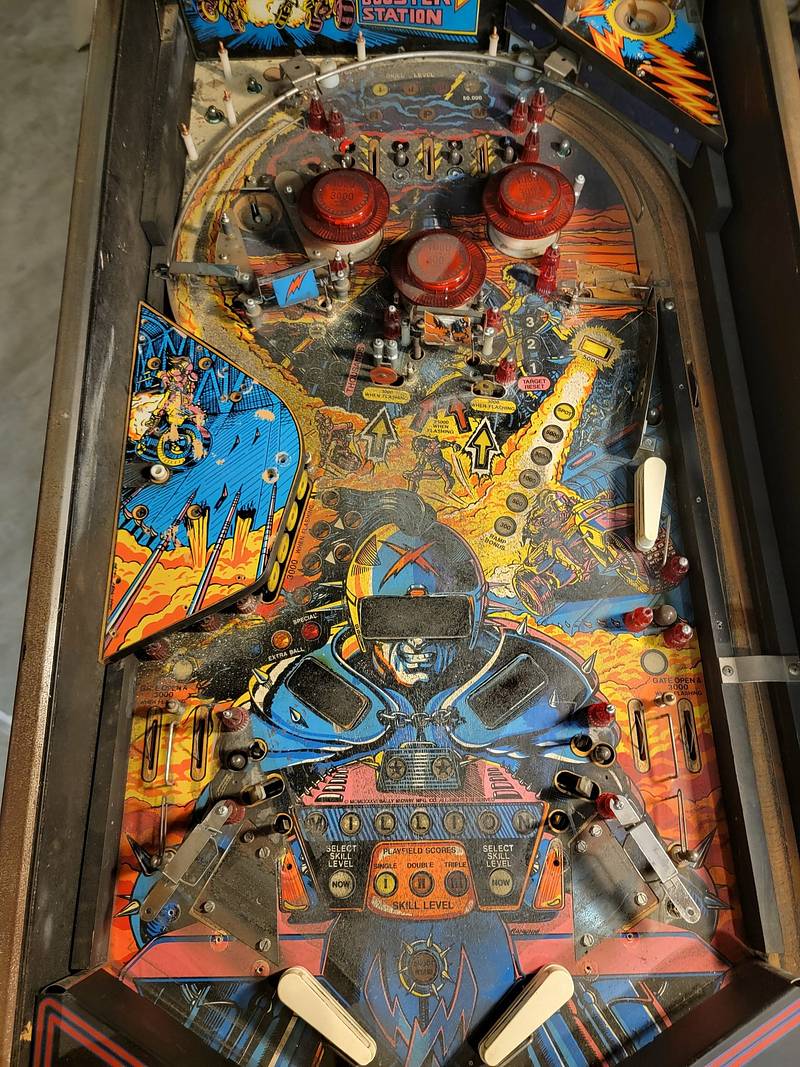 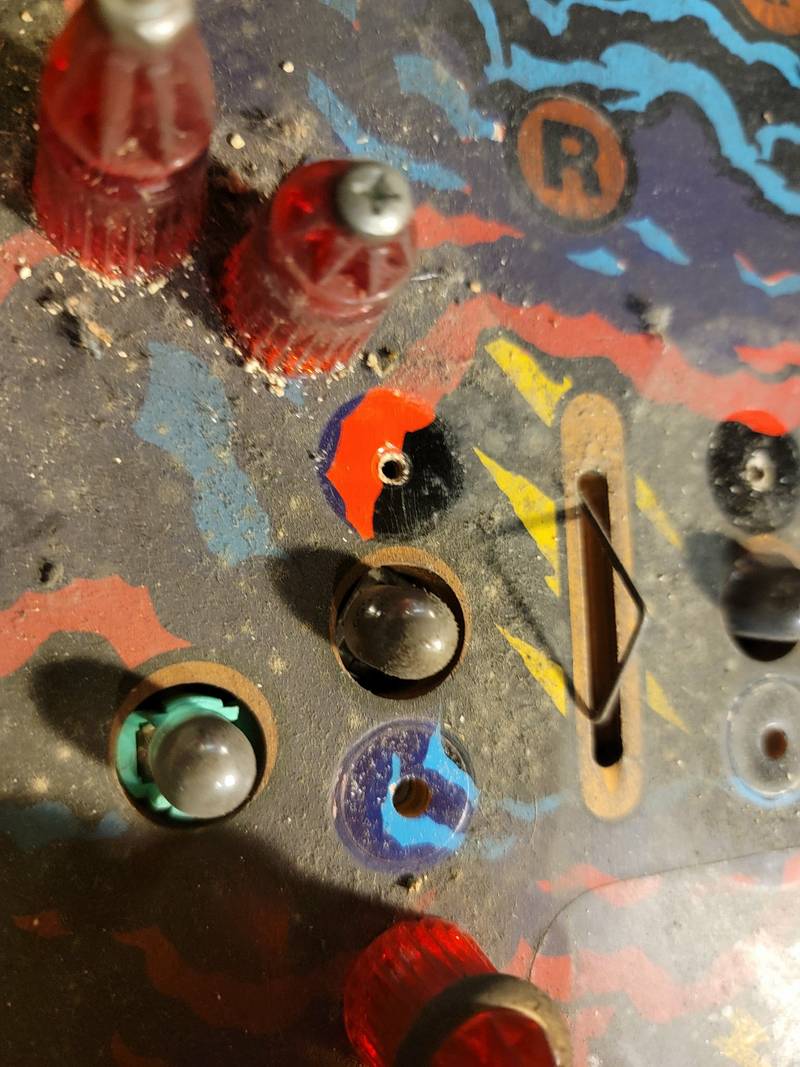 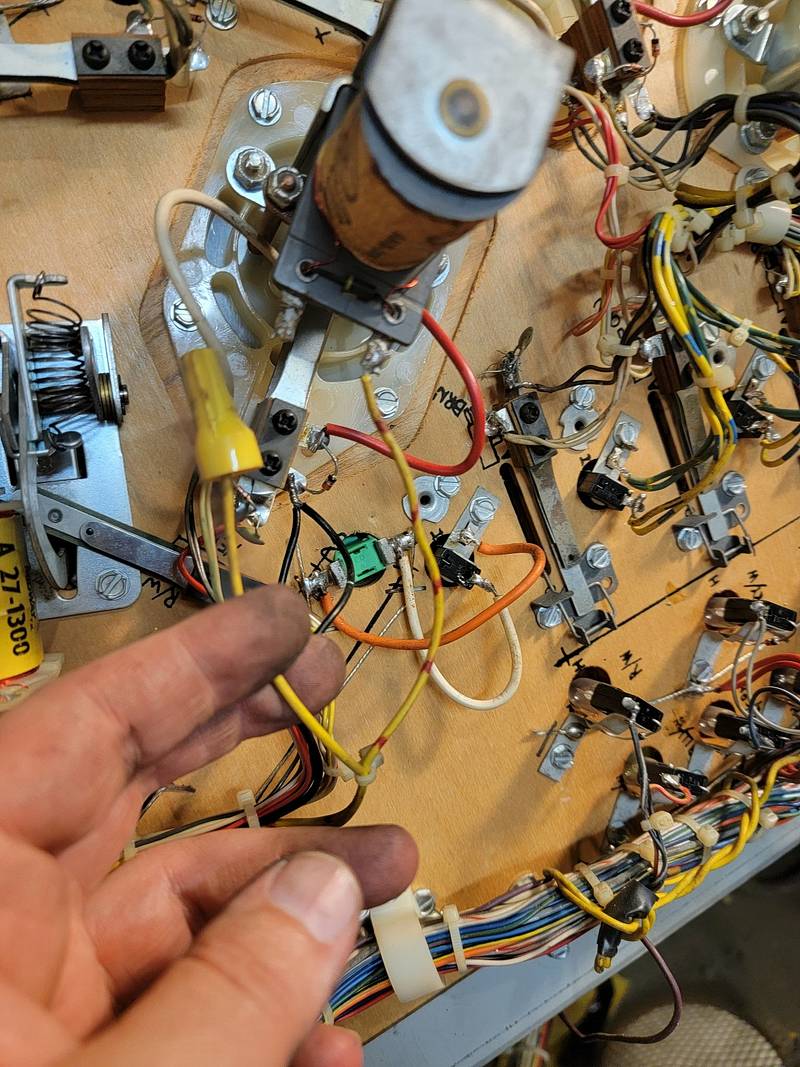 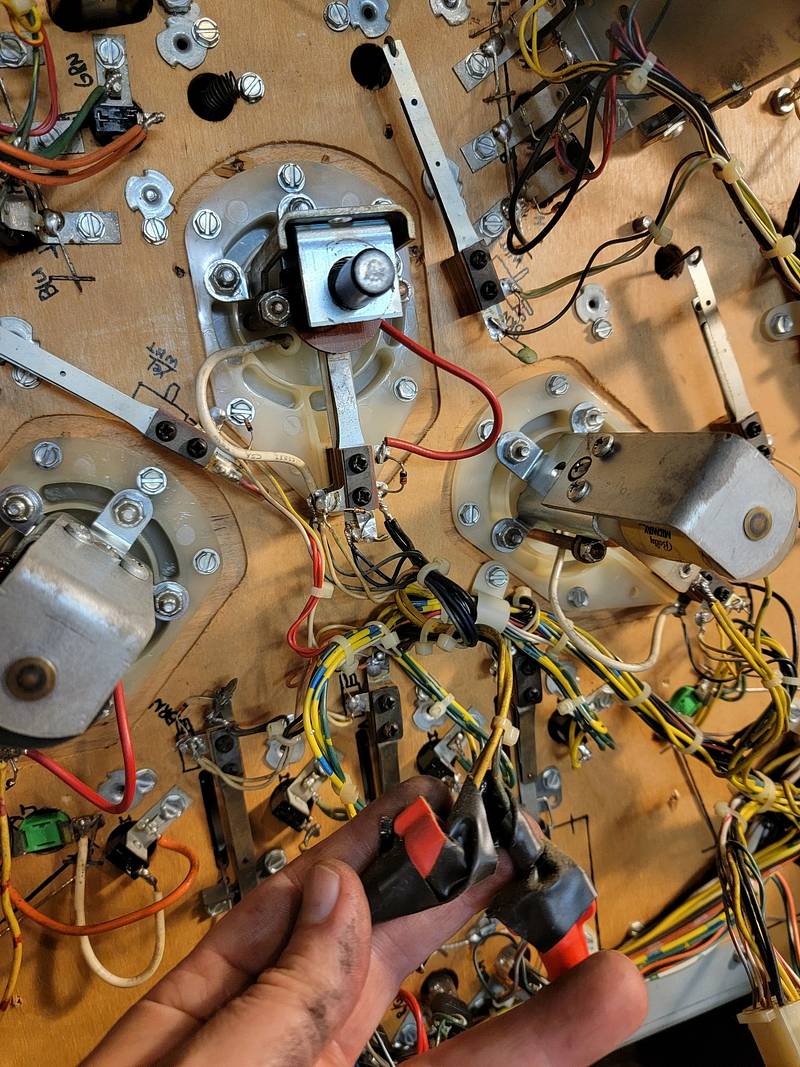 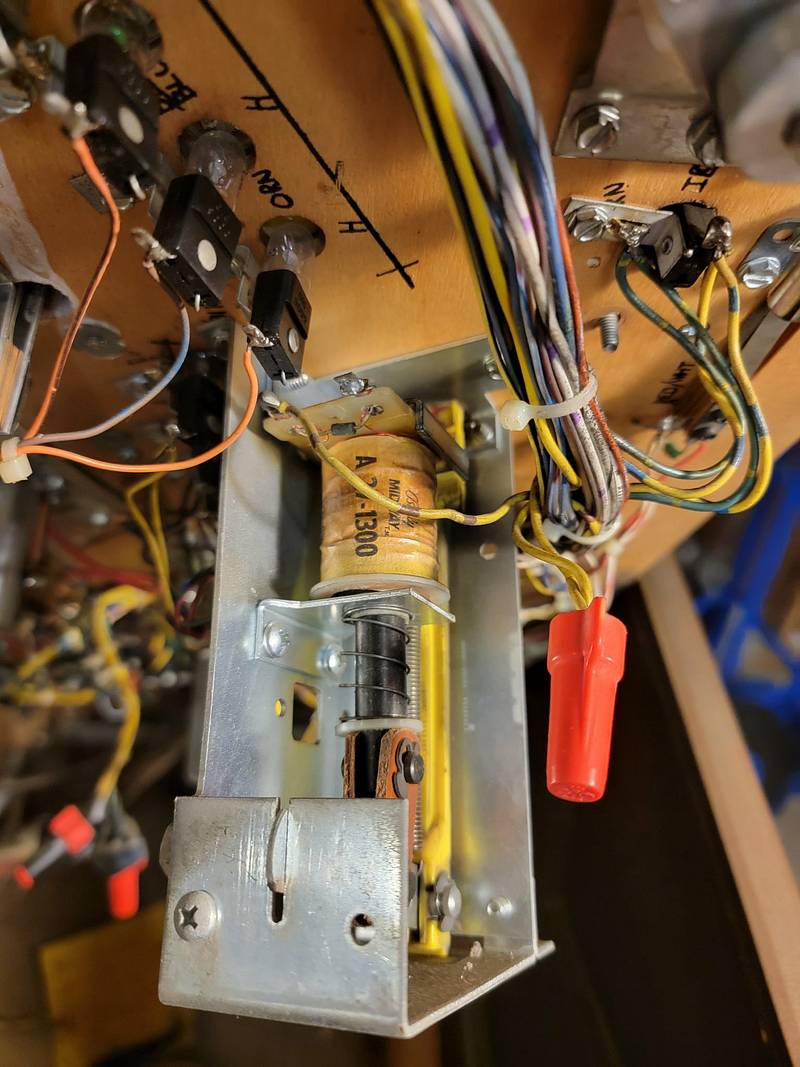 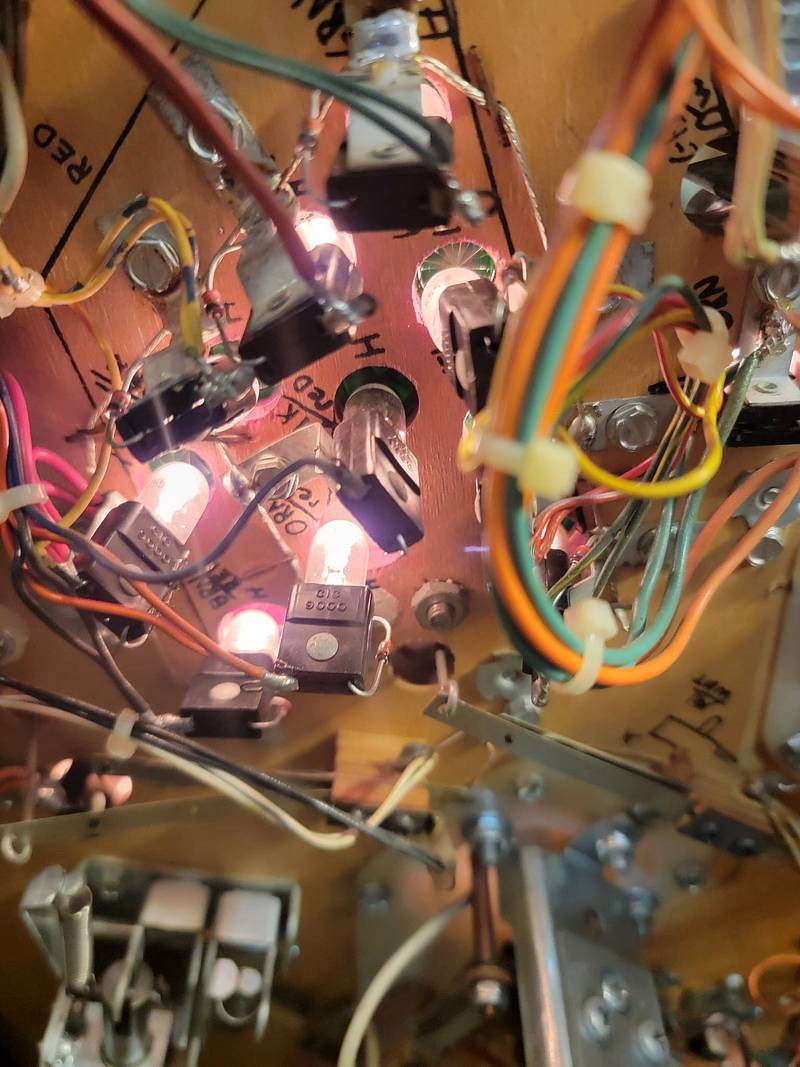 1. 2 pops aren't working. Left one has one wire disconnected (on purpose apparently) and middle pop is missing coil. 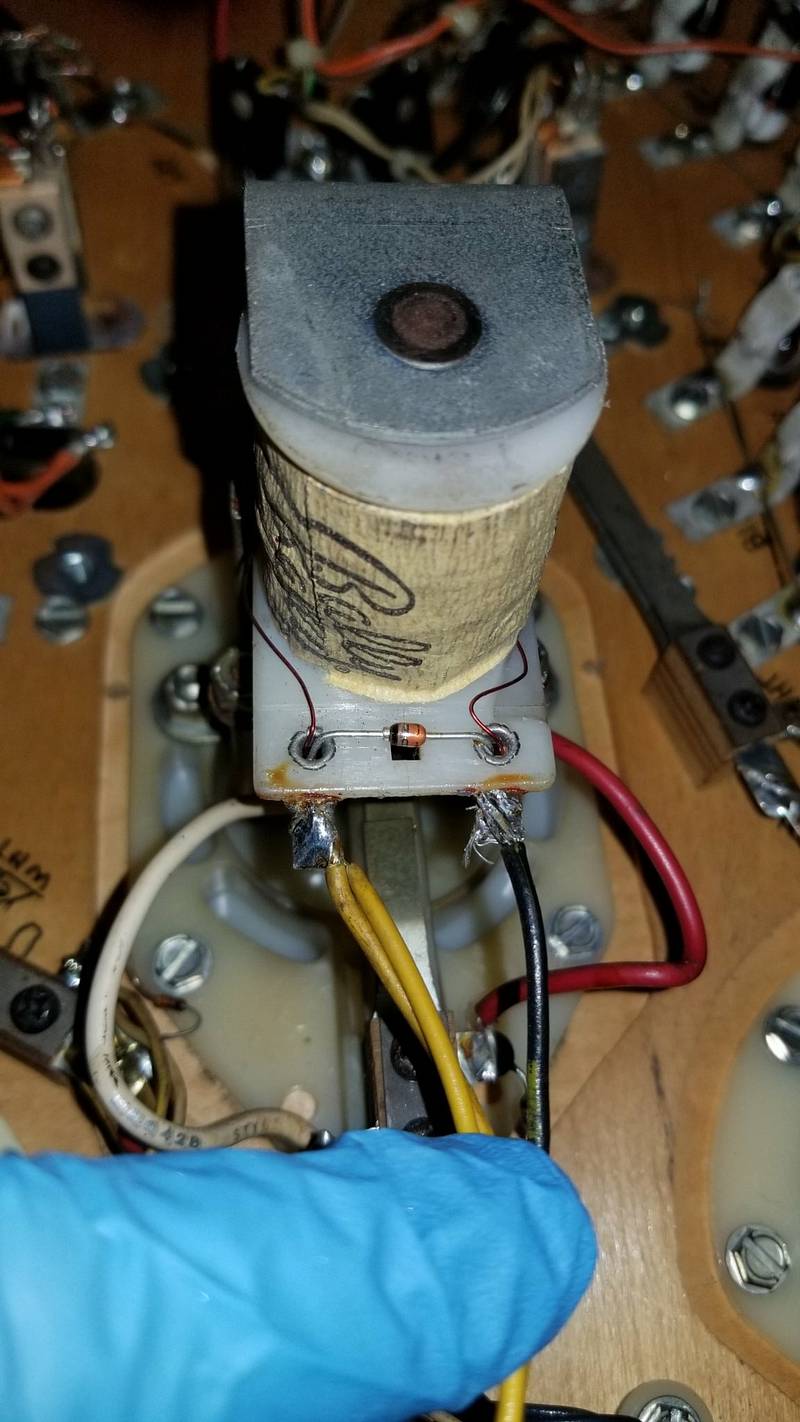 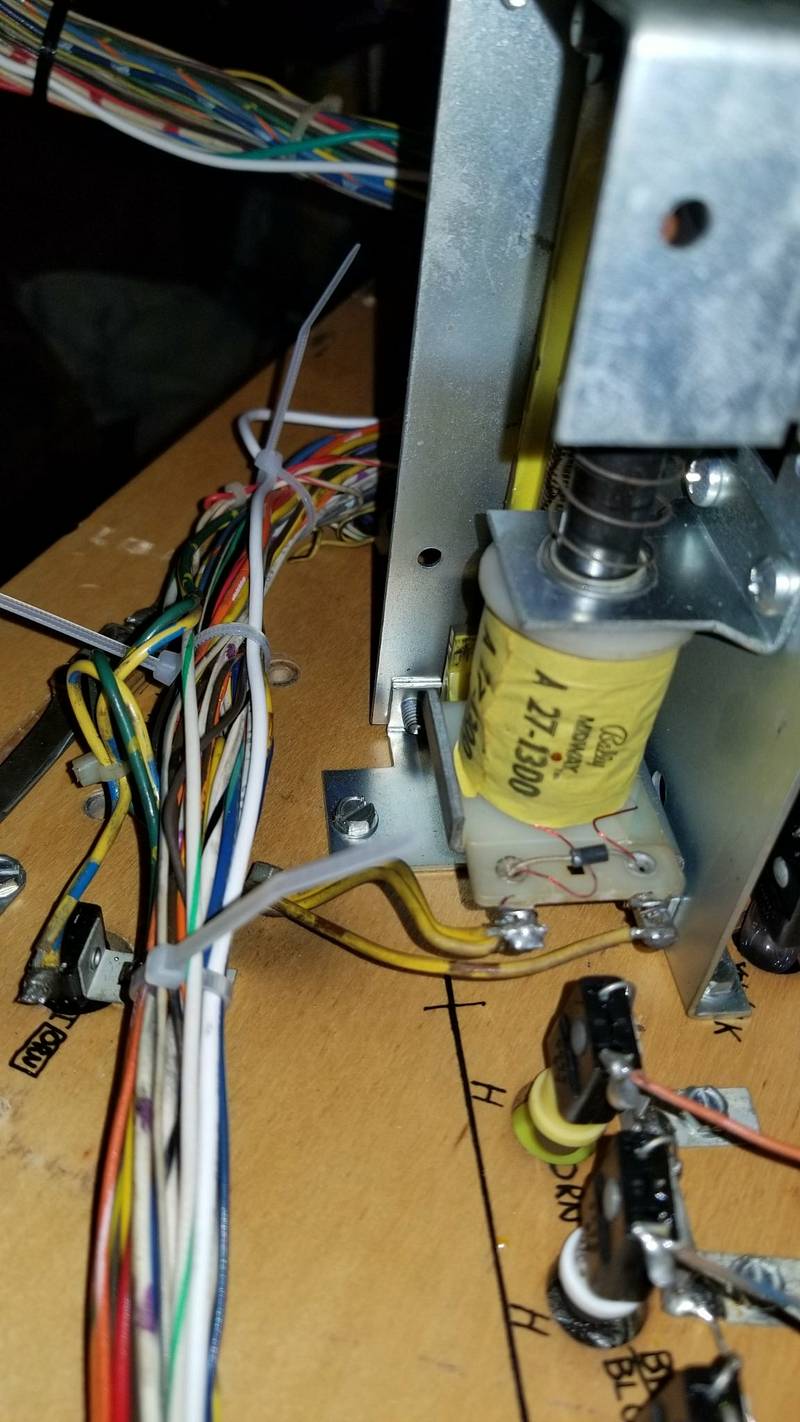 3. One light won't light - green light #8.
Have you checked the associated transistor for this controlled lamp?

1. 2 pops aren't working. Left one has one wire disconnected (on purpose apparently) and middle pop is missing coil.
[quoted image]
2. Drop target won't reset. One wire is disconnected (also on purpose).
[quoted image]
3. One light won't light - green light #8.
Have you checked the associated transistor for this controlled lamp?

Thank you for the pictures! I will check the transistor. So does the left pop only have 2 wires going to it instead of 3 like the other two pops and drop?

So does the left pop only have 2 wires going to it instead of 3 like the other two pops and drop?

I don't recall which pop is which, but here is one that does only have 2 wires. 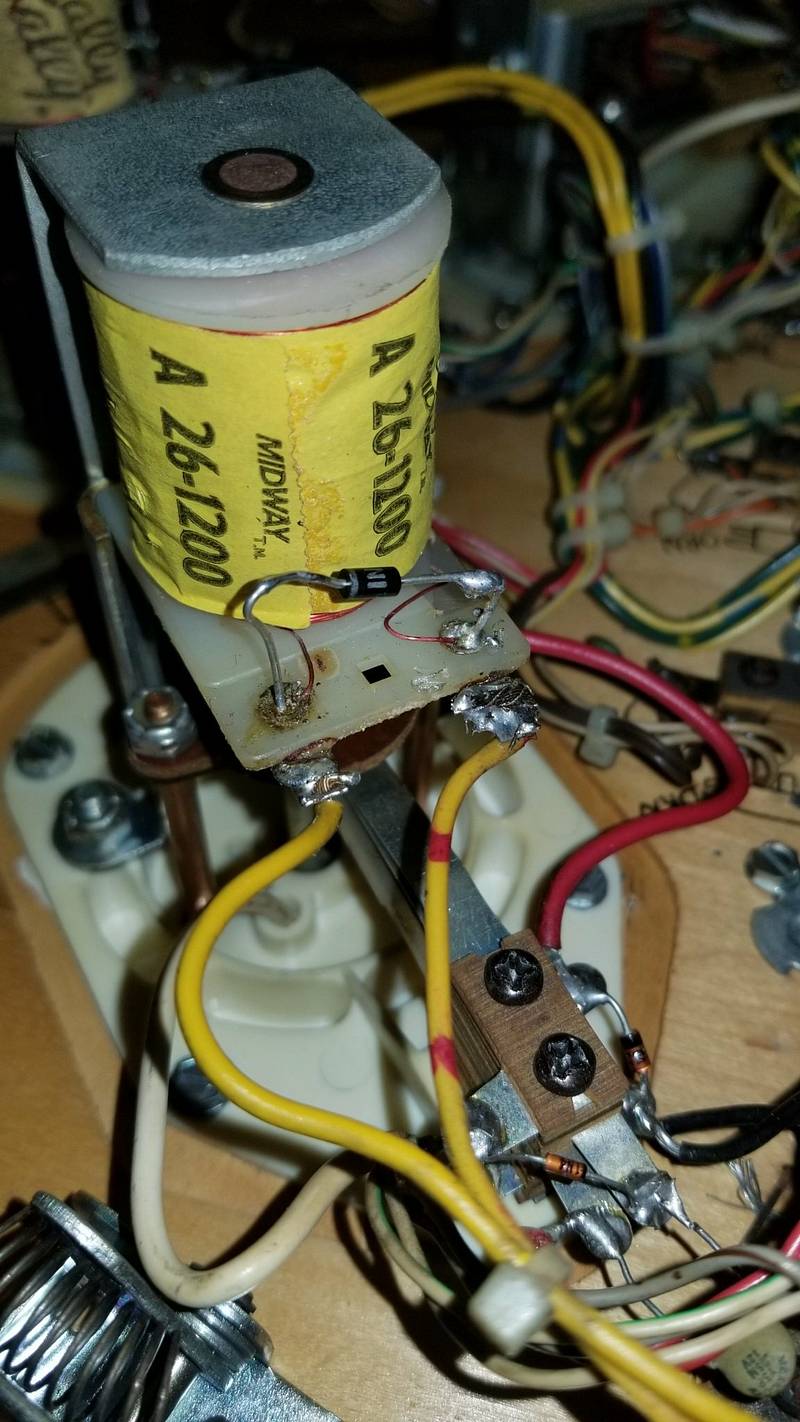 I don't recall which pop is which, but here is one that does only have 2 wires.[quoted image]

Hi all, a follow up from early this year.
I had ordered a new mpu from swemmer direct and was waiting for it to arrive to do a final post to advise how it all went, so ordering it direct from swemmer started great, prompt emails a good deal on the board, postage and tracking went well. the board arrived nicely packaged with no visible damage.
The board was to replace the original mpu which works without fault ( i wanted a backup just in case), i installed the new board but it would not boot and would stall at different flashes sometimes 1 sometimes 3.
Contacted swemmer for help, initially he accused me of killing the board, i tried re seating the game roms and got the mpu to boot but after a powerdown it wouldnt boot again, informed him of this and he now thought that a mechanical issue was the cause.
After reseating all the chips the mpu would boot now and again but NOT without a long power down between attempts, when it did boot playing a game would see the score screw up, during a normal game the last digit score only shows a zero but this mpu would show an number between 0 and 9, matching numbers would still would award a free game if the first number was matched, last 2 numbers 39 would award free game for 30 nvram would not hold settings either.
Sent the board back for warranty, he informed me that the nvram was in the wrong slot and that was causing the issue and now the board boots fine but testing would continue for a few days just to be certain, he said that the board seemed still to be a little flaky and would build a new board to be sure, i asked if he was using new chips (not the ones from the original board) and was asured that he was, testing coninued for a week before being posted back.
Board arrives, installed, same fault, i swapped the the game roms from the oem board and purchased a new Nvram locally once these were installed the game works but now has several SCR's that were blown i changed these over and the board has worked okay for several months.
All of these repairs were done with permission ( to avoid warranty issues), a refund was given for the Nvram but i asked to have the Eproms replaced (i wanted to keep the oem board intact) his response was that he would replace them bu he was shifting house and advised it would be around june before that could happen, after repetead requests this has still not happened and now refuses to respond to my emails.
In my original post i highly recomended swemmer, i withdraw that recomendation and if you choose to use him it is done without my recomendation