I was playing a game explaining the rules to my wife upon hitting the drop down targets (far right) it doesn’t not award the 500 pionts like the other ones do **Doesnt spell pacman either, only way I can get it to spell pacman for the far left is go through the side shot that evens out the letters.
Furthermore when the captive ball is hit to the other side (far right) the leftmost dropdown Target doesn’t not come up and the far right target doesn’t go down nor does it award the 1000 points . No other issues I have seen besides this. Where should I start I am pretty handy with a soldering iron and such but this is my first pin(ish) and I don’t know where to begin. I have tested for continuity on the switches to see if they weren’t engaging but there’s coninuity

Special Notes: MPU board seems new to me doesn’t look like the originals I have seen, again I am new to pins so I may be mistaken 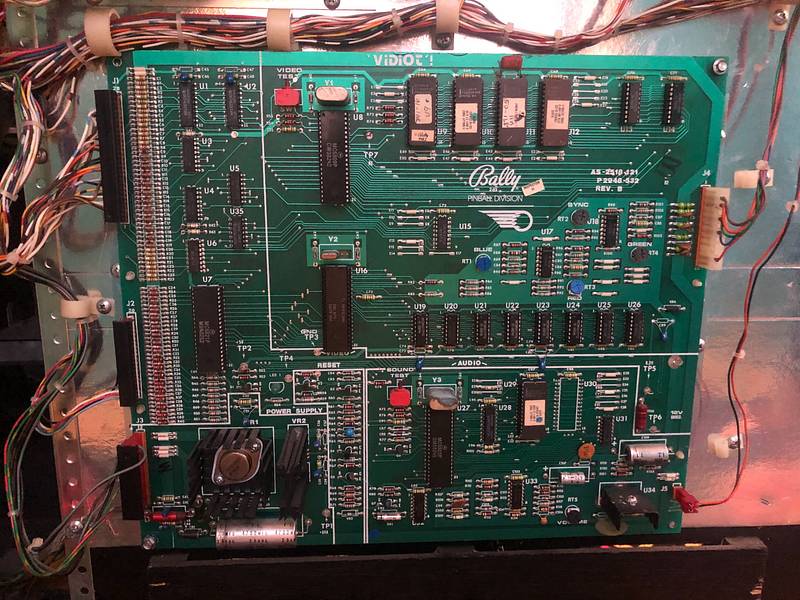 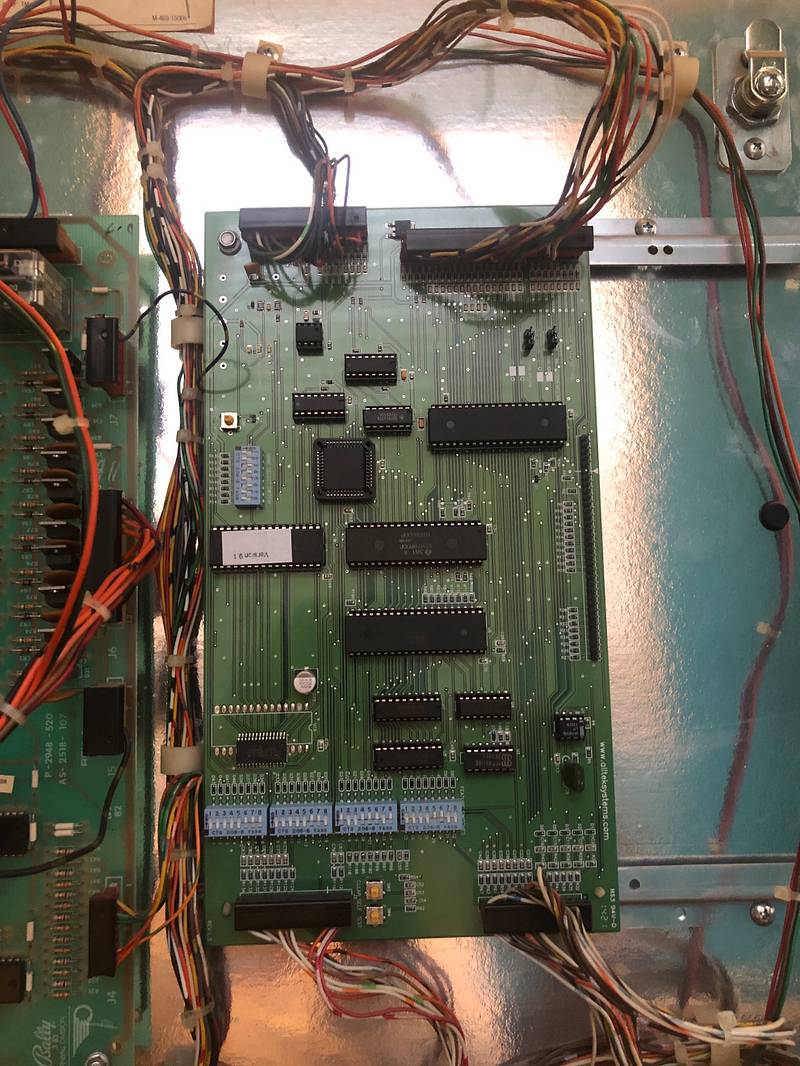 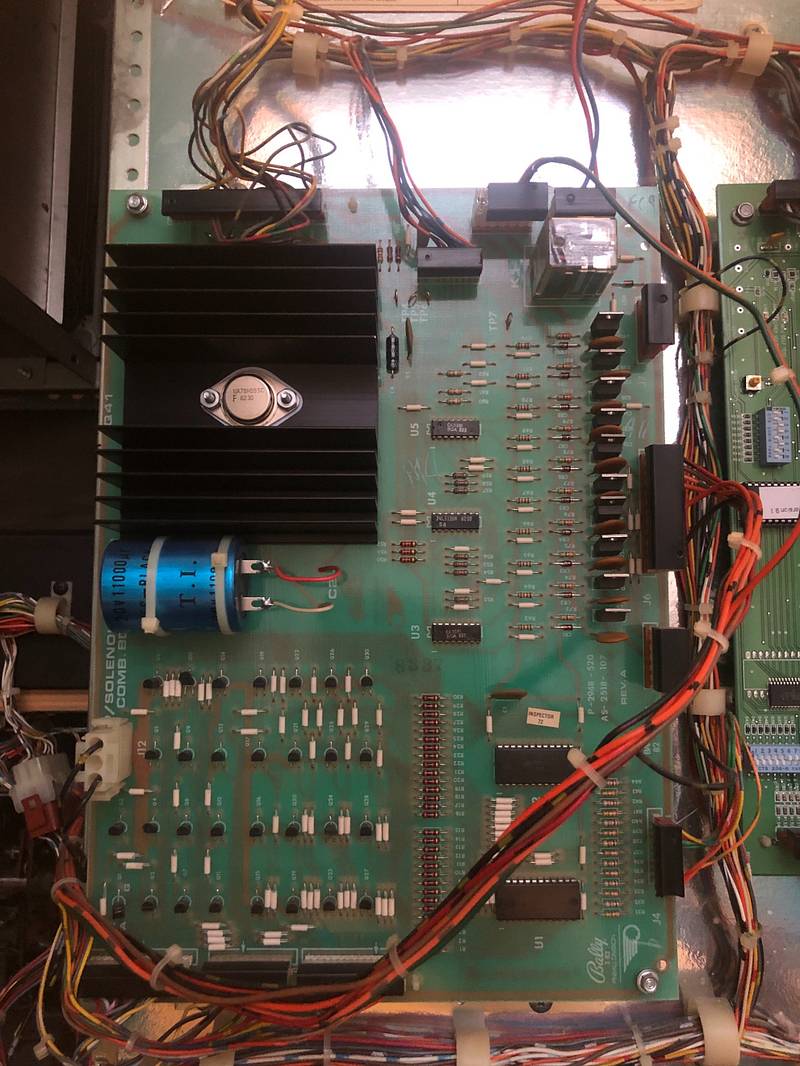 Supply pic of Mpu to thread please. I have a baby pacman and probably can assist with pics uploaded by you.

Supply pic of Mpu to thread please. I have a baby pacman and probably can assist with pics uploaded by you.

Pictures added, thanks in advance 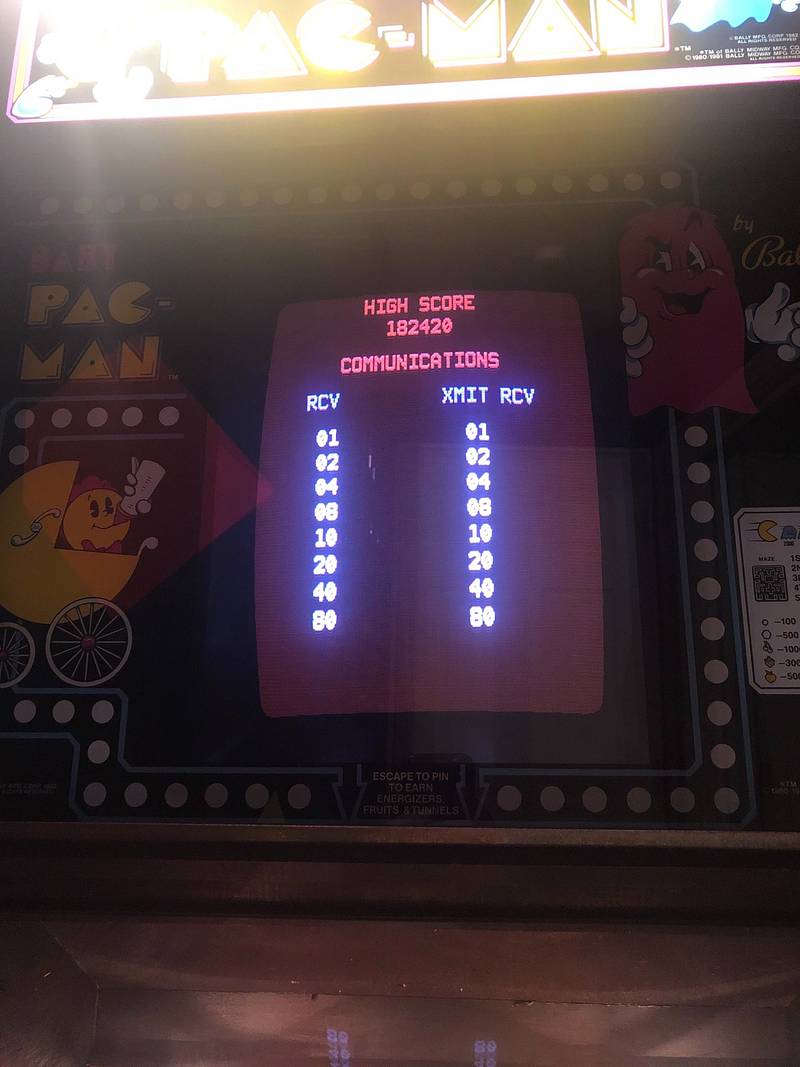 Check your microswitches up near the captive ball. Are they registering? Sometimes they just need tweaked so they register when the ball rolls over them.

Check your microswitches up near the captive ball. Are they registering? Sometimes they just need tweaked so they register when the ball rolls over them.

I am getting continuity through both micro switches and when the captive ball rolls over the metal lever it does cause the switches to make contact. Does anyone know how much power is supposed to go to these switches? And I assume it’s measured in DC voltage

Maybe it’s just not getting power?

My theories
the little node on the switch is blown

Board issue (not sure which board)

Looking at the switch matrix in the schematics, it appears that switch 17 (the right captive ball switch) and switch 25 (rightmost drop target) are on the same row, and the only other switch on that row is the right flipper end of stroke switch. 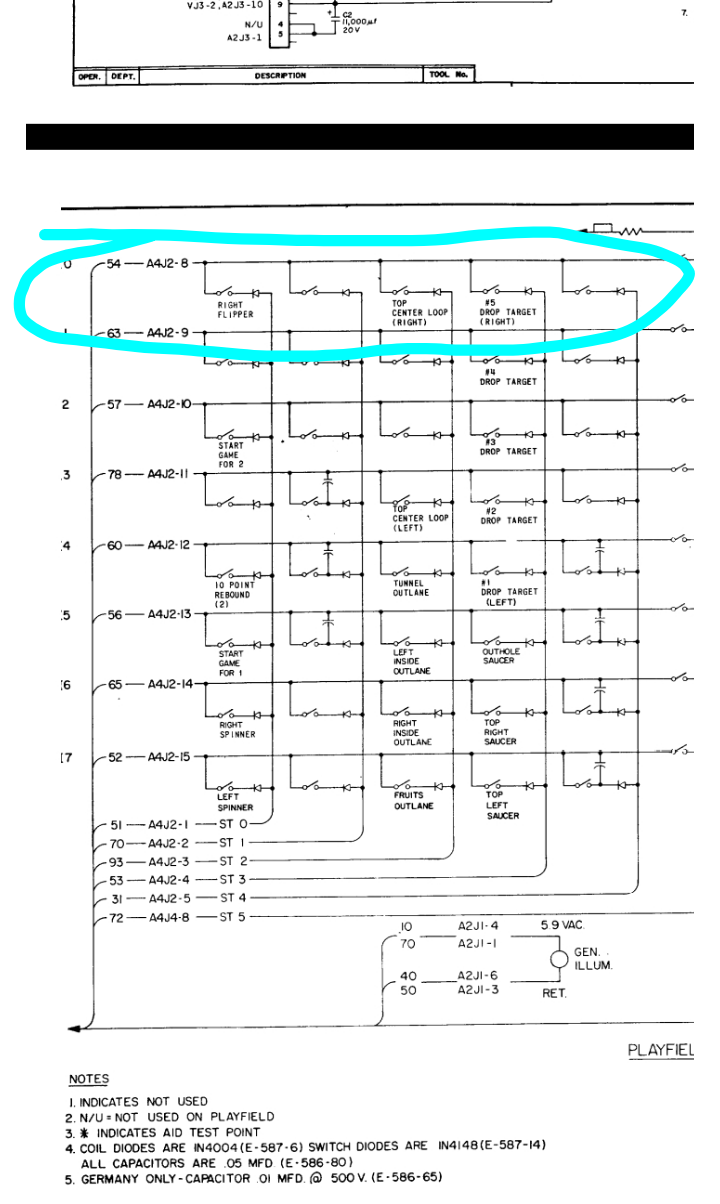 I'm not sure exactly which switch is being referred to as the right flipper switch (edit--it's the right flipper EOS switch or a switch attached to the eos switch stack, perhaps for advancing lanes on the playfield or something like that?), but we do know from the schematic that there is a White/Green wire that daisy-chains from the right flipper EOS switch, to the right captive ball switch, and to the 5th/right-most drop target switch. (Note the number 54 is on the same line A4J2-8, the row i circled. 54 is the color code for the wiring, found further down the schematic, in this case 5=white, 4=green)... 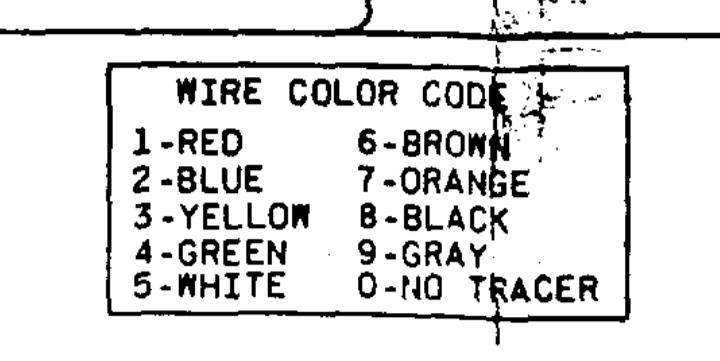 Reseat the female connector at A4J2 while you're in there.

Fixed! Not without some wtf moments.
Special thanks to teekee for helping me via pms and thanks to all who replied.
We have another baby pac up and running now.

The wire from the captive ball rightmost switch didn’t have continuity all the way to the vidiot board. Did a little snip snip and tie, works like a champ now, at somepoint Ill get a molex and rerout everything back through it but for now I’ll just enjoy it